Any of you guys MMA fans?

Gold Member
Who ya'll got tonight? I think Usman pulls it out, but Colby has been on a heater lately.

I don't even know who Nunes is fighting, but she's probably a huge favorite.

Aldo vs Moraes was a close fight. It could have gone either way.

I couldn't care less about two women fighting. God they are both so ugly.

I have Max and Colby winning.

Gold Member
This dude is kicking the heck out of Holloway's legs.

Gold Member
Agreed. I think Colby won the 2nd round. Not sure about the first.

Usman is a boring champion.

Gold Member
That was a dope fight. Props to Colby for fighting with a broken jaw.

What was up with the ref stopping the fight for a second and saying we're gonna have a clean fight? I don't see what either of them did that was dirty. Maybe I missed it.

I watched his Joe Rogan podcast and he said he had a friend who was always watching "smart" shows like "Colbert report."

He's a hell of a fighter, though.

Gold Member
Usman wears the most god awful suits. He dresses like a kid going to prom.

Orthodox
Usman deserved the win, even though you guys are right that he's boring to watch. He also missed dozens of knockout windows throughout the fight, because every single time Colby threw a left, his right hand dropped and left his chin wide open. Somehow Usman never picked up on it.

Gold Member
It isn't his performances that bother me so much as his personality. He's an extremely boring, basic guy. I've watched a few interviews with him and he's just not very interesting or perceptive when it comes to fighting. He doesn't really bring anything new to the fight discussion and his fights are very much by the numbers. He's extremely proficient and has an amazing work ethic. I cannot deny him any of his laurels and I don't mind fighters who fight safely. He's got a family to feed so I can get that.

He comes from a strong wrestling background and he has always placed a huge emphasis on outpointing his opponents so badly that there is no room for the judges to say he didn't dominate the rounds that he did win.

It's pretty mechanical, but it does explain why he rarely goes for knockouts. He mostly likes to smother his opponent. It is a bit of a shame though because he's a very large welterweight.

Welterweight is a pretty weird division. I used to consider it deep but with Woodley MIA, TIL and Gastelum in MW and Colby erased who else is there that can possibly contend with Usman?

There's always the wildcard Masvidal but I'm not quite sure he's got what it takes to handle Usman's superior size. Who knows though? I said the same thing about Till and we all saw how that went. Super Saiyan Masvidal is not to be underestimated.

Orthodox
I used to watch him BJ Penn and George saint Pierre were the headliners. These days I don't watch television of any sort really

Gold Member
I think Usman and Colby were both going for volume in that fight, but some of those hits were nasty. They were definitely trying to knock each other out, though.

That might have been the best fight of the year.

As far as fights go, I'd like to see Colby fight Woodley and Usman fight Masvidal. Khabib vs. Usman would also be pretty interesting, but who knows if Khabib would be interested in moving up in weight. 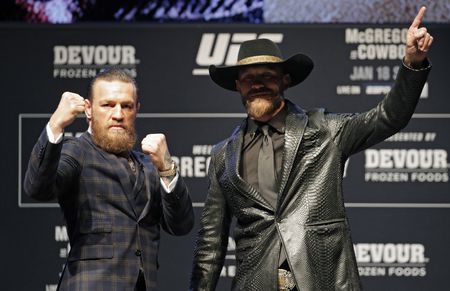 Orthodox
Cerrone had one job: survive into the second round.
E

Yes he could’ve have gotten rocked with the initial thigh to the face, but what legitimate mma fighter gets dizzy from a thigh slap to the cheek.

He ate 4 shoulder bumps in a row without trying to change position.

Why drop his hand to block a body kick? Only time fighters get tricked into blocking low is when they had eaten too many body kicks. No godly reason for cowboy to block low with a roundhouse coming at his head.

What’s the number one thing to do when you are on the ground? Pull guard. Not just kneeling with your head completely exposed to get pounded.

Retard fight IQ at every level.
So disappointed.

Excalibur said:
Retard fight IQ at every level.
So disappointed.
Click to expand...

It looked like a thrown fight to me. McGregor even had WWE tier antics with the four consecutive shoulder bumps, c'mon. Actually, it was most likely scripted, just like everything else in our dumb society.

Gold Member
Lots of armchair warriors in here bruh... no way you guys would have lost that fight right?? What a scrub Cowboy is, geeze... if only he had a fraction of the knowledge of alpha fighters from the RVF he would be a 5 division champ champ champ champ champ

I should have never bumped this thread and let it die. Cause its way better off dead then having you clowns converse in it.
Share:
Twitter Email Share Link
Top