king bast said:
Let us also remebemr that ~800 of those 1231 covid deaths were in Victorian nursing homes, after Dandrews forced them in there to boost the body count, same as Cuomo did in new york.
Click to expand...

As well as being inline with the outspoken British funeral director, John O’Looney & his experience with "care homes". 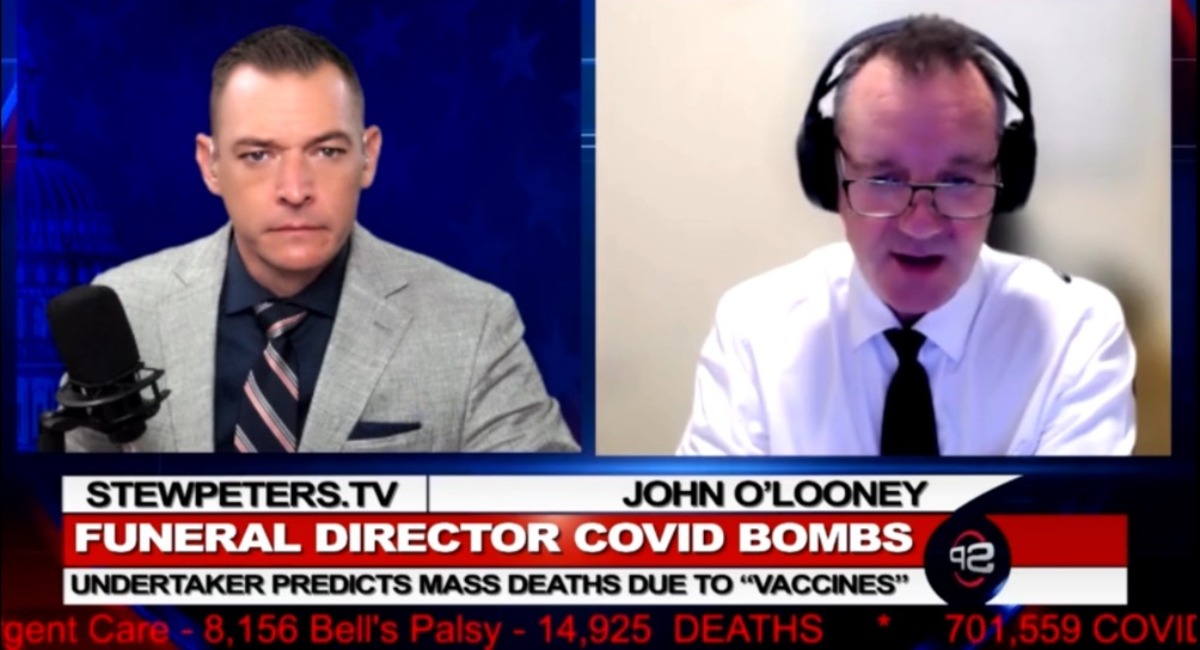 John O'Looney joined host Stew Peters on the Stew Peters show to talk about what he believes will be a genocide scenario in the near future.

Even a Chinese invasion of Australia could not turn the country more Communist than it is now.

Godward said:
Even a Chinese invasion of Australia could not turn the country more Communist than it is now.

In some crazy ways I would almost prefer a Chinese invasion.

At least the Chinese government has the balls to simply be what they are - sinister authoritarians.
The Chinese don't really try to hide it.

Non-Christian
I fear cartoons in the future which feature characters like Joker's henchmen, prison guards, and corrupt cops are all going to talk with aussie accents. Because thats how badly the country has seared its reputation. An atrocity, yet a joke.

It will kind of be like how bad guy characters in kids shows always seem to have those raspy italian-american gangster voices now...
A

Protestant
The People's Republic of Australia.
B

There's other people with their masks pulled down in the background. At 0:08-0:12 there's a maskless guy towards the right, at 0:27 there's also a guy without a mask towards the top right.
Not sure why they decided to arrest the couple.

Belgrano said:
There's other people with their masks pulled down in the background. At 0:27 there's also a guy without a mask towards the top right.
Not sure why they decided to arrest the couple.
Click to expand...

It appears that they are removing people from a beach area. Here is a video of police thugs groping a lady in bikini, apparently:

Other Christian
Got in to work this morning and there it was on the notice board......... All staff must be vaccinated by the 15th of October. This is being rolled out across all hospitals here in Victoria. Don’t think I’ve ever looked forward to a fight like this in all my life, BRING IT ON!
P

Foolsgo1d said:
The lines are drawn. Those cheering on tyranny are useful idiots who will be flying too close to the flame one day and they'll all of a sudden realise how wrong they were, but you should damn well bet they will try and destroy you in the meantime.
Click to expand...

I’m not much of a student of history, but considering the current situation, I’m wondering how many people remained truly faithful and loyal to the ideology and leadership during the latter decades of the Soviet Union? Were even the believers mostly broken by 1991? I don’t think there will be any reckoning for the current left until we literally have children dying and being systematically abused in the state’s gay/trans enlightenment camps, and even then, the media would likely play defense.

Belgrano said:
There's other people with their masks pulled down in the background. At 0:08-0:12 there's a maskless guy towards the right, at 0:27 there's also a guy without a mask towards the top right.
Not sure why they decided to arrest the couple.
Click to expand...

That reminds me of Yuri Bezmenov. Australia seems to have entered the crisis stage.
A nice book about this "deathwish" in which most countries dwelved into is Socialist Phenomenon by Igor Shaferevich http://robertlstephens.com/essays/shafarevich/001SocialistPhenomenon.html

"Understanding socialism as one of the manifestations of the allure of death explains its hostility toward individuality, its desire to destroy those forces which support and strengthen human personality: religion, culture, family, individual property. It is consistent with the tendency to reduce man to the level of a cog in the state mechanism, as well as with the attempt to prove that man exists only as a manifestation of nonindividual features, such as production or class interest. The view of man as an instrument of other forces, in turn, makes it possible to understand the astonishing psychology of the leaders of the socialist movements: on the one hand, the readiness and even the striving to erase one's own personality, to submit it completely to the aims of the movement (so obvious in the statements of Piatakov and Trotsky cited earlier) and, on the other hand, the complete collapse of will, the renunciation of one's convictions in case of defeat (Müntzer and Johann of Leyden, Bakunin in his "Confession," the behavior of Zinoviev, Bukharin and others at the trials, etc.). In fact, if the instrument is no longer needed, all meaning for its existence is lost, and in man's soul the source of courage and spiritual strength runs dry. (Bakunin, for example, both before and after his imprisonment is quite a different person from the utterly broken and self-abasing author of the "Confession." And Bukharin, in his emotional "Testament," says that he has no differences with Stalin and that he has had none for a long time. He thereby dismisses his entire activity and even deprives himself of the right to protest against his own execution, since that would involve a disagreement.) This point of view is consistent with the calls to universal destruction, with the attractiveness of destructive forces like wars and crises, with the allure of death and the idea of Nothingness."
Click to expand...

Brutal forms of control in the past lasted long until an external force came to break it. After such empires fall, people are left souless.

Ondegardo, a Spanish judge who served in Peru in the sixteenth century, noted a similar phenomenon. In his books, he constantly laments the complete regimentation of life and the removal of all personal stimuli which led to a weakening of and, sometimes, the complete destruction of family relationships. Grown children, for instance, often refused to take care of their parents. (56: p. 127) Baudin, a French student of Latin American history, sees in many traits of the contemporary Indians the aftermath of Inca rule--indifference to the fate of the state, lack of initiative, apathy. (56: pp. 124-125)
Click to expand...

Other Christian
Gold Member
Proof they don't hire police for their intuition nor independence anymore...

Handsome Creepy Eel said:
Need to vent here. I have a family member who lives in Australia but comes here to Croatia every year for several months for a vacation.

She's always been insufferable, but this year it's especially bad as she spends her time railing about how Croatians are stupid and/or evil for not rushing to take the (Pfizer) vaccine, how this is such a xenophobic and primitive country, how the anti-vaxxers and flat-earthers are holding us all back and need to be banned from all public spaces and commerce and vaccinated by force, etc.

Yesterday she even convinced my own dad to visit me and my wife to "express concern" that we've turned into anti-vaxxers, conspiracy theorists and right-wing extremists, and why aren't we vaccinated with the wondrous Pfizer vaccine yet, all based on some sort of viral post that she read that was claiming people don't even need to know what's in the vaccine and that they should just trust the science and take it for the greater good, yadda yadda yadda.

Bitch, if you like your certificates and vaccines so much, go back to Australia and enjoy being locked down in your house in Sydney!

But no, she'll "conveniently" hang around here and enjoy the freely accessible beaches, restaurants and shops here, while shitting all over it and the people who make it possible.

She is just like the White Liberals who immigrate to Red States to turn it Blue. Like a Locust.

Alright hope you also got the religious exemption documents ready.

Medical exemption, religious exemption, breach of OH&S laws, no federal laws passed, Australian constitution ignored. Got em all lined up thanks brother. I don’t particularly want to go with the medical or religious exemptions first up (and our union said they would “support us” with the medical exemption). Because the way I figure it, the hospital will simply say, ok Gary, we acknowledge your medical exemption and we will still honour your role as an employee here, however because you are unvaccinated and pose a risk to everyone else on the wards, you can no longer perform your normal duties in the area where you’ve been working for the past 7 years. So we’ve had to relocate you to a “safer” area of the hospital, now enjoy your new role out the back working in the cold emptying the rubbish bins for the rest of your miserable days here. I’d rather take them on from with the whole unlawful and unsafe (material safety data sheets etc), approach.
R

infowarrior1 said:
The "Geeks" Triumph using Bullies of the State over the Bullies they imagine they are punishing. They aren't ever going to do it themselves.

Bureaucracy makes it possible for Dan Andrews to have power. Unlike the Old Warrior Aristocracies featuring leaders who themselves fight in battle and are comparatively Masculine

Pen Pusher Gamma Males rule and the organized violence of the state obeys.

Thugs obey the dweebs who in High School would often stereo-typically get shoved in lockers.

Why they love and are attracted to Bureaucracy:

I was the only one at school who shoved some nerds' heads in to a locker.

Just applying for a religious exemption is playing into their hands. Some lefty, college "educated" HR goon is probably having an orgasm right now thinking of the big red, "DENIED" rubber stamp she is gonna smash on your religious documents. Even if they do decide to be nice and "accept" your beliefs, why is some HR floozy or manager in any position to judge said beliefs? Either way, you are legitimizing this new normal.