Behavior of women during the riots

STG said:
This will happen naturally when the hard times come.

Real suffering will wash away all the SJW bullshit. Nobody will care how many made up genders there are when you are wondering when the next time you will get to eat is.

The U.S. government spent 1 trillion dollars in a month.

How much longer is the house of cards going to stand?
Click to expand...

Real suffering has been around for a while, the issue is that most people who suffer economically and socially don't really understand the nature and the source of their problems. mired into the left-right dialectic.

Leonard D Neubache said:
If a woman asks you what your political affiliations are and you answer "to crush my enemies, feel them driven before me and hear the lamentations of their women" then she doesn't give a single shit who your enemies are or why. She only cares that she's submitting to a conqueror, not wasting her time with genetic driftwood.
Click to expand...

There will soon be a herd immunity response by white men to these psycho-shock epithets but after the political culling (i.e. their isolation) or political castration (i.e. the male feminist cup bearers and palm tree leaf wafters round the political marriage bed of bourgois female academia with the ghetto) of many.

The Soviet quasi medical and psychological diagnosis of radiophobia was used after the meltdown at Chernobyl. Watch how multicultural meltdown will be associated with epithets relating to xenophobia towards target populations by the psycholigarchs.
G

Leonard D Neubache said:
The reality is that Blue America is so far beyond what even cucked nations like Germany and the UK consider normal. I could go to Germany (if I spoke the language more fluently) and find a woman whose programming was shallow enough to be reformed with solid frame. If someone suggested I do the same in a Blue American city I'd tell them I wouldn't waste my time.

I suppose I premise most of my advice on the assumption that forum members in America have at least moved to a deep red state and are surrounding themselves with people who are basically considered Nazis by modern standards.

Maybe all advice about women these days has to be premised with "Step one: If you're in a blue state, move to a red state."
Click to expand...

But. Being the paining the ass confrontational dickhead that I am, I refuse to move from the state of my birth, tho the ppl governing are as unholy as they get.

I choose to fight for the land I love....albeit I did move to the more mountainous north that ppl call ....hopefully, soon as like Seattle it’s so EASY to secede from CONUS apparently.....lol, the state of Jefferson.

For the time being I, like my Pastor who’s an ex LEO, has said figuratively mind you, F it, I’m opening my church. Even tho there’s a memorandum on gathering size or what not... gents, if we all vacate the shit states...many of which the land is absolutely spectacular, and all move to say Wyoming (no disrespect...) Where does that really leave us?

I, for one, have vacated to the mountains and for now, continue to tribe build like minded Christian men.... peacefully, for now, and for the moment.

But like I want to tell the multitude of virtue signaling left leaning acquaintances (and mainly their handlers) on my FB (that I keep to stay in touch with my military team and career mates....)

Y’all maaaaay want to consider what will happen when men like I, and the veteran of multiple specialized combat arms MOS others... decide to put that unique knowledge into play once we feel the rule of law is null and void due to unconstitutional actions.... Pray, we never get there. (And yea, I know we already are...)
There shall be no Gettysburg fellas. So it don’t matter where you are, technically... Only hard scrabbled god awful guerrilla warfare like in Afghanistan....

I truly fear the time is close if not already passed.

Gold Member
That poor cop. I wonder what kind of inception-like base response he'd get if he simply replied to everything she said with "I acknowledge your existence, Jimmy(?)."

...because I'm acknowledging that you exist."
J

SkyDancer90 said:
The mothering instinct is certainly part of it. I also think there is a latent (not overt) sexual component to it. They favor confident middle eastern men to soy-ified European men.
Click to expand...

If Jeff Bezos got divorced and had to pay alot of his income to his ex-wife despite being the richest man in the world:

Jeff Bezos and MacKenzie Bezos ended their marriage after spending 25 years together. Their divorce affected the Amazon CEO’s net worth.

Perhaps its not just wealth but behavior too? Rich weak Men acting cringe end up ATMs

“I want to smell you, I want to breathe you in. I want to hold you tight.…” the billionaire messaged his gal pal.

Video definitely reduces the possibility of he-said/she-said when it comes to incidents involving the police. There’s no question what happened here.
J

infowarrior1 said:
If Jeff Bezos got divorced and had to pay alot of his income to his ex-wife despite being the richest man in the world:

Jeff Bezos and MacKenzie Bezos ended their marriage after spending 25 years together. Their divorce affected the Amazon CEO’s net worth.

Perhaps its not just wealth but behavior too? Rich weak Men acting cringe end up ATMs

“I want to smell you, I want to breathe you in. I want to hold you tight.…” the billionaire messaged his gal pal.

But Bezos will always be able to get a date as long as he still has substantial wealth and/or income.

JohnQThomas said:
But Bezos will always be able to get a date as long as he still has substantial wealth and/or income.
Click to expand...

Even so his date could just do the same thing as his ex-wife. While Wealth opens doors. Its those with the right personality who is best able to take advantage of the opportunity.

Imagine him paying just as much money to his date as his wife.

The dude I've met who was most successful in the club scene was a chronically broke ex-stage magician (not Mystery, someone else I used to know IRL). A lot of them aren't thinking that far ahead.
G

911 said:
That's precisely what the Jesuits did, very successfully, in the 18th/19th century, working with and elevating the Guarani culture in South America.

There absolutely is a universal morality. Those who maintain the contrary are the product of the (((post-modern))) school. It's a mindset that has taken over popular culture been pushed in programs like Game of Thrones, and is a part of the racialist neo-pagan philosophy.

The problem is that young people have no frame of reference, they see Christianity as cucked and assume that its current distorted form is its true nature.
Click to expand...

Post modernism pushes moral relativity in its quest for equality. If all moral values are right, none can be wrong, therefore none can be scrutinized or seen as absolute right. It's all relative, man. We're all equal.

But as seen 1000 times over, equality dumbs everything down into a simplistic ooze where no one and no standard can rise above.

I maintain that because ethnicity is unique according to biology and tens of thousands of years of environmental adaptation, people live to their own tribal standards. You see a Jesuit stopping an isolated jungle tribe from eating their enemies. I see the West self-destructing in their ideological quest for equality, trying to make everyone happy with open borders, defunding the police, ignoring minority crime and abolishing IQ tests and the SATs.

Christianity was usurped by leftism like everything else in the West. It was once esoteric and disciplined. Now if you show up to church with a fag flag, a divorced mother of 3 and your adopted brown pets from the third world, you're THE example of virtue in your community.

Christianity was usurped by leftism like everything else in the West. It was once esoteric and disciplined. Now if you show up to church with a fag flag, a divorced mother of 3 and your adopted brown pets from the third world, you're THE example of virtue in your community.
Click to expand... 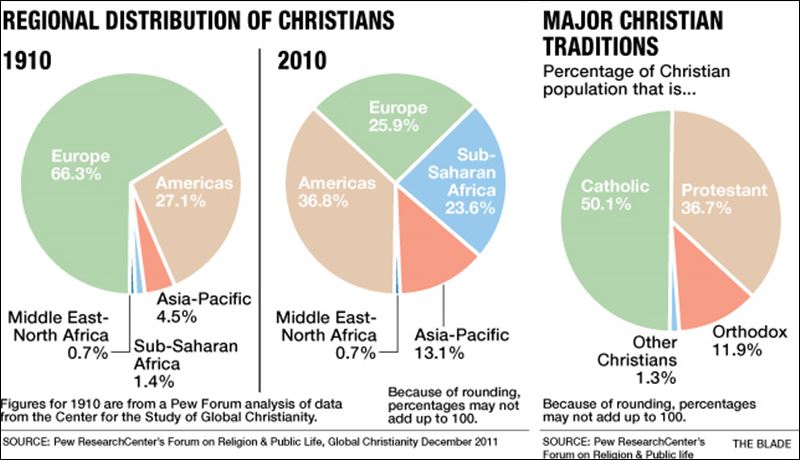 What are those graphs supposed to tell me besides Christianity losing its grip in the West and rising in parts of the third world?

Gold Member
Orthodox and Catholic are not waving the rainbow flag nor are most non-White parishioners in general. I hazard to say that most Protestants aren't doing the whole fag-flag thing either.

Cucked fagflag Christianity is a jewish pysop designed to project the idea that the majority of Christians have gone globohomo when in reality it's a stark minority.

Current odds remain that non-Christians are far more likely to be attending pride parades than Christians. Presume Catholic or Orthodox and the difference becomes even more pronounced.

"Christianity has been usurped by Leftism".

By what measure, pray tell?

Leonard D Neubache said:
Cucked fagflag Christianity is a jewish pysop designed to project the idea that the majority of Christians have gone globohomo when in reality it's a stark minority.
Click to expand...

True but I've found you have to go church by church. Some in our area are liberalized top to bottom, like the OP described to the T. No parody. Others might resist but still fall in line with whatever the status quo is. I recommend looking at the community connections the top leaders in a church have. Their relationships with scummy or liberal org leaders in your area seems to set the culture at the church.

NSFW. Black woman twerks in front of police in her underwear.