Leonard D Neubache said:
Antifa know that no cops = no protection. If they start something with a bunch of Right wingers then the stakes are life and death because when there's nobody to turn up and make an arrest the balance of risk on the Right shifts dramatically. Suddenly if someone from BLM or Antifa gets capped at night from a dozen yards away then nobody is going to turn up to arrest the shooter no matter how long he waits around to "give his side of the story". Without an immediate arrest usually followed by incriminating self-testimony the advantage BLMA have had up until now vanishes into thin air.
Click to expand...

The right wing "fascist" cops won't be gone, they'll just be masked up and cracking heads pro bono and anonymously.

'Anarchists' only like lawlessness when their lawful play by the old rules. I'm not saying this'll be a good thing, but it won't be to antifa's advantage.

I’ll second what LDB said. I’ve learned that through observation learned from having a motorcycle and attending events where that crowd was present.

I’ve also had some friends who witnessed an incident who couldn’t understand why some drunk guys wouldn’t make move on us when they outnumbered us 5-2. It’s because I had learned from that set I just mentioned and was applying lessons learned.
My suggestion at some point would be to try to place yourself in an environment where you can observe that like a swap meet. Just shut the fuck up, do not stare, and just observe the body language and behavior you see around you from 3 piece patch holders. If you’re decent at analyzing behavior you’re going to see very quickly why those people very rarely have to actually use violence.

watching the video from NM it’s easy to see why that guy got mobbed. He was very clearly giving off the message that he would use the gun but was afraid of having to do so. The correct message you want to imply is that you don’t really give a crap whether you need to beat some ass or not; that if you have to shoot someone it means so little to you that probably won’t even remember it the next day.

Ironside said:
Correct again. The problem with the right is their assumption that the powers that be are on their side. They are not, and it should be perfectly clear to everyone now that they are not.
When you have organized protests (like the anti-lockdown ones) it's not the antifa types that show up to break them up - it's the system and its police.
One bonus to Covid is that it makes wearing a facemask acceptable in public. Actually more than acceptable, ones who do not wear one are viewed as 'extremists'.
My suggestion would be to read H von Dach Bern's booklet.
Click to expand...

Here's a link to the booklet. If you click on the speaker button it will read it like an audiobook. 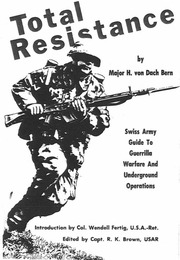 Another fine archive by the MurderCube boys. A guide for the Swiss Army on Guerrilla Warfare
archive.org

Yes though direct linkage is largely un-needed. It's more to psychologically prepare people for what they stand for and what they will do - as well as hammering home that what is being witnessed is not about 'democrats and republicans' but about straight up Bolshevism.
And there are those that are saying it will be like the Spanish Civil War or Yugoslavia, no, they are incorrect.
It will be the collapse of the Roman Empire, coupled with the Great Depression, coupled with Haiti/Rhodesia, coupled with Weimar Germany.
What it largely amounts to is quite possibly the greatest evolutionary filter imaginable, and those that lay the groundwork now will be the only ones that will make it through.
You must log in or register to reply here.
Share:
Twitter Email Link
Top