As an American (of some Scottish heritage) I have a hard time understanding the SNP. "Nationalists" who are open borders, full on lovers of degeneracy, and hardcore pro-EU. I know the know the Scots turned far to the left under Thatcher, and even before that were more leftist than England due to historically lower wealth, but I just dont get it.

The Scots in America became rugged frontiersman, and are primarily in Appalachia one of the most right wing areas in the USA.
E

Banned
All the Celtic (official) nationalist parties want nothing but to be an EU Cuckhold state.

The political class of these parties, are all filled with self-serving, avaricious quislings, who want to have their noses in the EU trough. When you look at the kind of financial & lifestyle packages the EU offers these types, it's clear that's it's entirely driven by greed.

If Sturgeon became a leader of an "independent" Scotland she would eagerly dance a merry highland jig to any EU whim or fancy, re taking 'new Scots".

Gold Member
I tried to shift through the last couple pages....

Am I right to say the UK just elected a "semi-Trump" in a landslide???
M

Cobra said:
I tried to shift through the last couple pages....

Am I right to say the UK just elected a "semi-Trump" in a landslide???
Click to expand...

Easy comparison. I can't imagine Boris is going to achieve anything meaningful though.

I think he benefited from being the lesser of two evils, and really, Labour and Corbyn pandered to the Twitter masses. All of their ideas sounded great on paper that you could get away with in a fantasy land, and probably the stupidest and most emotional generation the UK has ever seen (under 25s) lapped it up.

Now there is doom and gloom being shouted from the rooftops on Twitter when realistically, nobody's lives on Twitter are going to change day-to-day. The posturing has been immense, like I haven't seen before. That we saw all the celebrities coming out in favour of Corbyn and Labour and all the social media platforms were full of Boris memes and candles for Corbyn really brought back memories of 2016 with Trump.

We were all convinced on this forum back then that Trump was going to win. In the echo chamber of social media, everyone was convinced Corbyn was going to win and now the "nasty, racist, stupid bigots have ruined the country" by voting for Boris.

It's hilarious really. Anyone with even half a brain would have looked at what Corbyn was proposing, done the maths and realised that it made zero sense. It was a classic case really from his part of painting a narrative and giving people a problem, then feeding it and getting the feral masses (online) to drum it up.

He spectacularly failed and I hope his career isn't over because he will stop Labour getting into Number 10 the next time round too. I'll never forget his stone face when he visited the Manchester arena a couple of years ago when all those kids got blown up, then visited some muslims after some of them were revenge attacked (I think) and cried his eyes out with them. Cunt.

I didn't vote, for what it's worth.

Cobra said:
I tried to shift through the last couple pages....

Am I right to say the UK just elected a "semi-Trump" in a landslide???
Click to expand...

Yes - it was clearly a right-shift especially when Labour has become pure insane and areas that voted for Labour for 100 years suddenly turned blue.

It is definitely a Trump-like shift.

The UK is lost in my opinion anyway, so the Titanic will be sinking slower with the Tories, but still - it's a certain win because for the first time huge swaths of the Labour working class have realized that Labour hates them.

Gold Member
I agree Matt. And I didn't vote either - neither party represents me.

Gold Member
I work for a company that heavily promotes feminism or whatever the most recent social issues is. We have 100s of small offices around the country. 95% of the employees are degree educated or are studying a degree and are quite young (majority are either recent grads or on internship). By all logic if statistics are true then I should be working with labour supporters. Talking with them about the election both in the run up and the aftermath nearly all said they had or were intending to vote conservative. One of our interns switch his vote from the Conservative safe seat his parents live in to the marginal seat he works in to help with getting a Con majority. My colleagues are of different racial and class backgrounds too. It is quite refreshing.

Gold Member
I don't think this can be compared to Trump. Boris was already PM and a known quantity. He had the media on his side and some military were even hinting about a coup if Corbyn wins. Boris is the establishment, and whilst I'm glad he beat Corbyn/Momentum, this is not necessarily a victory for the British people.

I didn't vote either, I'm still in REDACTED and I didn't care to fly home. The stupid numpty posse won, but my vote wouldn't have made a difference.

Watch the girl twenty seconds in. "My country"

eradicator said:
This is reminding me of the day after Trump got elected
Click to expand...

It was a monumental victory because finally large Labour-forever voters abandoned those crazies.

It was definitely a strong right-shift and comparable to Trump. The awareness of the poeple isn't just there on Trump level. And it's not as if Trump is much more than the Tories.

Now next is to prove that the Tories are not the solution either.

But getting independent parties up is notoriously difficult in the UK. Mark Collett wants to open the Patriotic Alternative. The problem is that the new Mark is a good option for Britain while his past and antics are the negatives at least for the normies. You need someone with a clean record. And even if they reached record numbers - my guess is that at best such a party would get 5-10% of the votes right before the demographic replacement.

Banned
Gays are the new jews


The UK’s parliament is still the gayest in the world after 2019 election
https://www.pinknews.co.uk/2019/12/...neral-election-snp-conservatives-labour-lgbt/ Other Christian
Gold Member
Gays are proxy warriors for the Jewish elite. 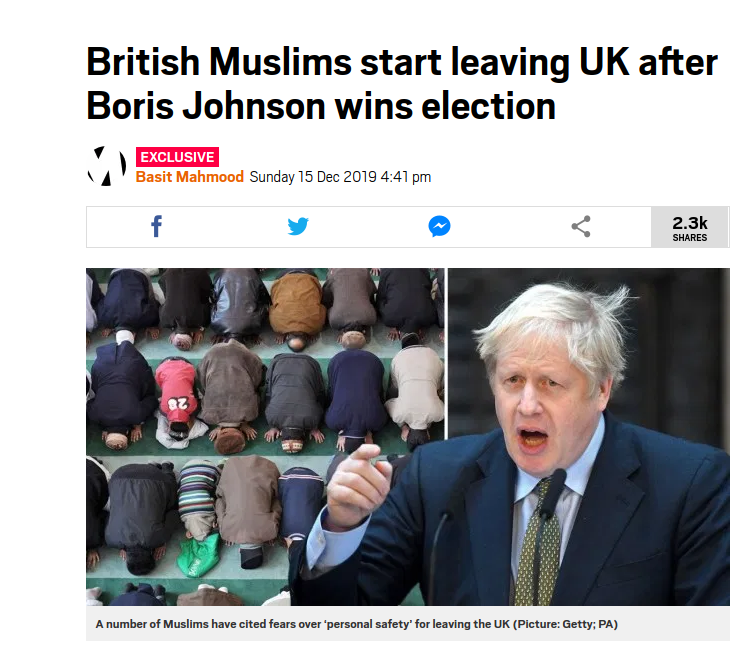 
The UK’s parliament is still the gayest in the world after 2019 election
https://www.pinknews.co.uk/2019/12/...neral-election-snp-conservatives-labour-lgbt/

The Labour Party’s civil war should be interesting.

Banned
Once you go full SJW like Labour or the Liberal Democrats, then it's over. There is no turning back unless papa Rothschild calls, but those guys don't care. The reason is because the far left mindset is permeating and is a full supremacist viewpoint - none other gets accepted. Once they are in, they just double down and don't let up even if Labour gets 2% of the votes in the election and zero seats. You essentially are stuck with them until death.

Catholic
Gold Member
Indeed, it's not like they will just turn around and say "gee, we overdid this SJW thing a bit and it backfired, let's dial it back a bit". If they were capable of that sort of introspection or remorse, they wouldn't be leftists in the first place.

Gold Member
This is why it's a golden age to plant the accelerator down on genuine Right wing politics rather than accept the Center-Left garbage of the so-called conservative parties.

The more you hammer them as being traitors delivering globalist outcomes the more people will wake up and move further Right. When the Left is in power there's always that foolish sense that when the Conservatives are back they'll undo the damage that's been done, but it never happens. Conservatives need to feel the very real threat of losing elections because of vote-splitting from true Right wing patriots. As Trump has shown us, there is no point winning an election if your party is toothless.
You must log in or register to reply here.
Share:
Twitter Email Share Link
Top