Gold Member
Standard procedure for a shooting victim is that the police have to secure the scene before the paramedics are allowed to attend. If they attend prior to having a police escort then they're going to get fired or at least have no coverage if they suffer injury or death.

What happened in this case is that the police arrived to secure the scene and were chased out of the zone by the CHAZfolk. No cops = no medical response. Certainly not in America where blacks literally shoot at firemen and ambulance drivers attempting to save lives and property.

This is Robocop plot come to real life. Corporations enabling useful idiots to wreck a city so they can buy it back for pennies on the dollar. Only large corporations that can afford private security will be left standing and that will replace the police.

Leonard D Neubache said:
Standard procedure for a shooting victim is that the police have to secure the scene before the paramedics are allowed to attend. If they attend prior to having a police escort then they're going to get fired or at least have no coverage if they suffer injury or death.

What happened in this case is that the police arrived to secure the scene and were chased out of the zone by the CHAZfolk. No cops = no medical response. Certainly not in America where blacks literally shoot at firemen and ambulance drivers attempting to save lives and property.
Click to expand...

And now someone is dead.

Maybe youre full of the proverbial. Yep, most likely.

Gold Member
This was around 7 years ago, but is still a prime example of why first responders now wait for the scene to be secured before entering.

According to police, Spengler set his house on 191 Lake Road and the family car on fire in the early morning hours of Christmas Eve, and then armed himself with three guns: a Smith & Wesson .38-caliber revolver, a Mossberg 12-gauge shotgun, and a .223-caliber Bushmaster AR-15 style rifle.[3] When firefighters arrived shortly after 5:30 a.m., Spengler ambushed them from an earthen berm across the street from his house. Two firefighters were killed, and two others were injured.[4]

Kona said:
And now someone is dead.

Not one person and two paramedics.

Kona said:
Regardless of what the CHAZ organizers say, that's still America, and what's right and what's wrong hasn't changed.

If those ambulance guys had the ability to go and save somebody and they didn't, that's wrong.

Isn't the greatest gift whatever God you choose to believe in could give is life?

Those guys sat behind the wheel of a life-saving vehicle and did nothing while someone died?

People are just not giving a damn about each other anymore.

They probably have to wait for the cops to get there first. 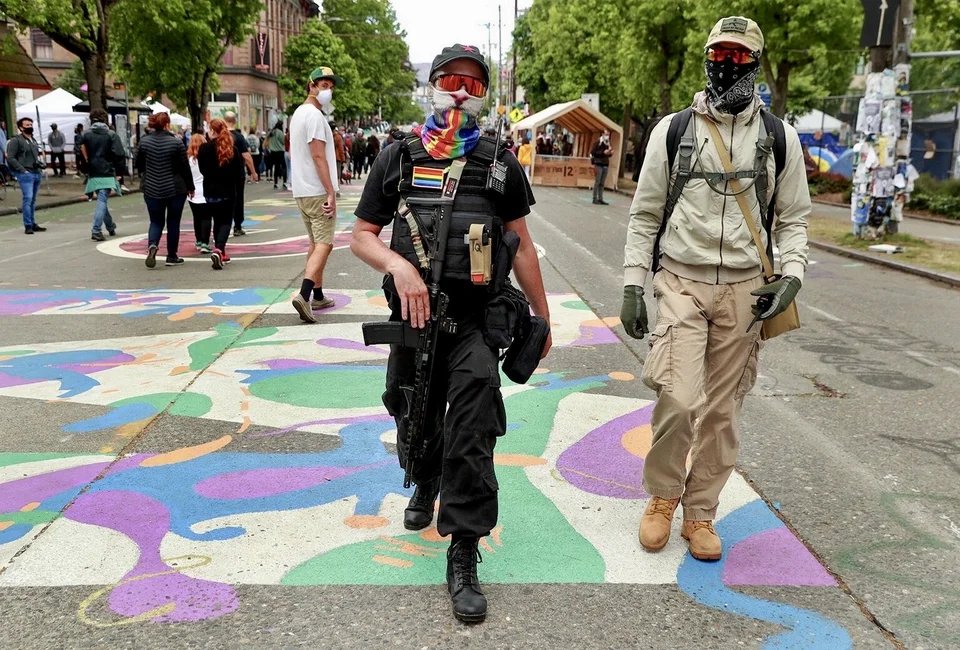 Wow, who would have thought there are consequences to acting like spoiled, whiny little communists and thugs. Hard to feel sympathy for people that couldn't care less if the roles were reversed.

They don't want a healthy, functioning society. Well, they sure as hell got what they asked for.
L

You guys need to relax. I have been told by upper-middle-class whiteguilt-pushing women that CHAZ was created and is being led by white supremacists. So all those black women and men and Antifa-like white folk are white supremacists. All the rapes by the local black men there are done in the name of hitler - you gotta trust me on this.

But seriously - the only people I feel sympathy for are the local folk who are trapped in the zone. Though let´s face it - 90% of them were down with BLM before, so it´s mostly stupidity. Still - it´s amazing how the state just abandons you to be raped, robbed and tortured on a whim.
T

The people that actually live in Capitol Hill, and the business owners, voted for this. I'm not going to say they deserve it, but I don't feel sorry for them. They live in constant denial, and still won't wake up.

The people of Seattle, and especially Capitol Hill, are out of their minds and enable all of this. I cannot stress enough how brainwashed they are. It's one thing to read about it, but to have conversations with them is pretty eye opening.

Statement on the Shooting at the Capitol Hill Organized Protest

Our deepest condolences go out to the loved ones of the black protester who was tragically killed this morning by gunfire at the Capitol Hill Organized Protest (CHOP). Socialist Alternative and I stand in solidarity with the family and friends of the victim, and with the injured protester now in the hospital, as well as with all community members and fellow activists.

Though we await confirmation of the details of the killing, there are indications that this may have been a right-wing attack. If so, this would not be the first such attack on the Capitol Hill Black Lives Matter protest. As many recall, an armed man drove into the protest action on June 8, and shot black activist Dan Gregory, who had heroically intervened to stop the driver.

We need immediate solidarity with the protest at the CHOP, and unity in our movement against reactionary violence. Our movement refuses to be intimidated.

It is no accident that right-wing hate and violence has grown dramatically with Donald Trump in the White House. If this killing turns out to be a right-wing attack, President Trump bears direct responsibility, since he has fomented reactionary hatred specifically against the peaceful Capitol Hill occupation, and even threatened to intervene with federal troops. Also responsible are the conservative and corporate media outlets, both locally and nationally, which have themselves whipped up right-wing hate by completely misrepresenting the nature of the peaceful protest occupation, and who are continuing to do so even now, claiming that this shooting proves the CHOP is descending into chaos. Seattle’s establishment Mayor Jenny Durkan and Police Chief Carmen Best also share responsibility for having portrayed our protest movement as violent.

It is crucial that the CHOP occupation has developed a self-defense committee, which has played an important role at the encampment, and that general assemblies to ensure ongoing political discussions have been taking place. Socialist Alternative and I believe we should further develop both these important initiatives and the democratic structures of the CHOP with regularly scheduled general assemblies to vote on decisions for the movement, and democratically agreed plans around self defense. Elected committees of self defense have historically played vital roles during general strikes, occupations, and in mass movements, in order for the working class and marginalized people to defend themselves and carry out necessary functions in place of the forces of the state. Our labor movement has a crucial role to play in the protest movement, and should provide people and resources to assist in the defense and organization of CHOP.

Our movement should also demand and insist that the Seattle Police fully investigate this attack and be held accountable to bring the killer(s) to justice. Because of the repressive role of the police under capitalism, and often with developed links to reactionary groups, police have historically frequently failed to prosecute violence by the right – even going as far as to shield the perpetrators. For decades in the South, law enforcement across the country did not lift a finger to stop the KKK’s lynch mobs, and often participated in them. It is being reported that police resources nationwide have been used to spy on, repress, and infiltrate the #JusticeForGeorgeFloyd protest movement, and to surveil protest occupations like the CHOP. But on the other side, how much time has been spent investigating the right wing, with their threats and acts of real violence? Just in recent days, neo-Nazis have been making public statements calling for the killing of protesters. Yesterday, on Juneteenth, the day of celebration of defeating the confederacy and ending the institution of slavery, many far-right and reactionary figures have made calls to start a new Civil War. We must demand accountability and justice, and if the police fail to thoroughly investigate and bring the killer(s) to justice, we may need to launch an independent community investigation.

We must show our solidarity with the victims of this violence by continuing to build our movement and fight for our demands: to defund Seattle police by at least 50 percent; for the immediate release of all protesters without charges; for the East Precinct to be permanently brought into community control; for at least 1,000 publicly-owned affordable homes in the Central District and the Amazon Tax to fund citywide affordable housing and green jobs with priority hire for marginalized communities; and for an independent elected community oversight board with full powers over the police, including hiring and firing.

Looks like they already have press releases like the Pravda of old. A Nazi dared to enter into this hellhole starting a shootout with partly armed Antifa and blacks - right.....

Another shooting in Chaz, dude was streaming it, got his phone taken away (by Raz?) but the stream kept going:

Big thread of CHAZ videos around the time of various shootings:

The tacticool guy is just a LARPer with his getup and crappy Baofeng shortwave radio. You know how to deal with guys like this? Bust out laughing while pointing at them.

Gold Member
CHOP is in no way autonomous so the name change makes sense. This space only exists because it has the support of the mayor and the governor.

Only if there is evidence of Federal crimes should the feds get involved. But as you know going the full Janet Reno can tend to backfire.