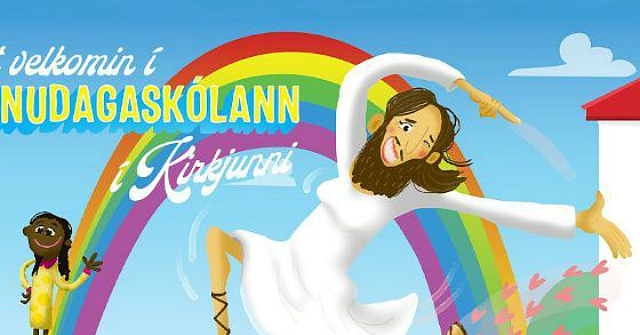 The Church of Iceland has raised eyebrows with a Sunday School advert depicting Jesus Christ sporting a long beard and bouncing breasts.

I strongly suspect that Satan has incarnated into the form of a man and currently walks the earth, likely on the west coast of the US (San Francisco)

Christ save us all
N

“In this [advert], we see a Jesus who has breasts and a beard. We’re trying to embrace society as it is. We have all sorts of people and we need to train ourselves to talk about Jesus as being ‘all sorts’ in this context,” he insisted.

All sorts of what?

"Church minister Guorun Karls-og Helgudottir also defended they advert, saying: “Each person interprets something in this picture. Some people interpret it as a trans Jesus, others as a woman. Some see Mary with a beard, and others see a genderqueer person. Views within the church are just as diverse as elsewhere.”

So, in this example, "diverse" means three distinct perversions, and one severe hormonal-imbalance freak?

Around 200 people left the church in the days following the scandal and there was a pretty sizeable outrage from the general public.

The church has since removed the picture from the ad campaign but will still keep it on a bus that will drive around the city.

I hope some good can come from this evil in the way that the true belivers look for god in other churches, but the main problem is the lack of non protestant christianity. There is both orthodoxy and catholism present but both churces are almost fully made up of immigrants. I am certain that if ether church started evangelizing the natives they would see significant growth. I pray the clergy will find the courage to do so.

The national lutherian church is already at a net loss of around 2000 people per year and will definatly die with the boomers.

Why do European governments continue to fund these state churches that no one attends? I get that a century ago, the government would want to stick their paws into the church as a means of propaganda. But they've destroyed the liturgy so thoroughly, and pushed the SJW nonsense so hard, that there are no laypeople left to feed the propaganda to.

I suppose we can at least be thankful that Satan has foiled his own plans once again, dividing his kingdom against itself.