Blade Runner said:
It looks like the realization (unbelievable that they act like this isn't a foregone conclusion) of a major world recession or depression with greater inflation is being put out of mind. I have a good cash position, but am seriously considering getting 100% into cash, apart from the really long term holdings I have.
Click to expand...

It does feel like the writing is on the wall, doesn’t it?

No one around has lived through a depression and we never fixed any of the problems that caused the last recession. And remember the talking heads on CNBC etc. telling you there is not recession and to buy stonks are all millionaires.

Then again they could kick the can down the road another 10 years, who knows. Best to be prudent and cautious these days.
Last edited: July 18, 2022
M

Orthodox
Gold Member
God Bless Mark Steyn for this hour long special segment - "Victims of the Vax" - on speaking with real life people who are either vaccine injured or bereaved over the death of their love one.

This panel has about the same objective intergrity as a Soviet military tribunal outside the Katyn Forest.

Protestant
Now the plan is to booster forever.

Garuda said:
Now the plan is to booster forever.
Click to expand...

This is what we guessed what would happen. Too much money involved.

Garuda said:
Now the plan is to booster forever.
Click to expand...

Orthodox Inquirer
42% of women had their menstruation affected by the vax.

A study published Friday in Science Advances reported that 42% of respondents had heavier cycles after receiving the COVID-19 vaccine.

Max Roscoe said:
42% of women had their menstruation affected by the vax.
Click to expand...

What would be the effects of such a condition? Could it negatively impact fertility?
R

Stoyan said:
What would be the effects of such a condition? Could it negatively impact fertility?
Click to expand...

Females have a set amount of eggs from birth. Bleeding heavily can release more than just one egg and by that bring forward infertility.
B

Garuda said:
Now the plan is to booster forever.

"that is how the vaccines work" well they got that part right, the way they "work" is to pump as much as possible into the gullible normies to get the wink wink effect.
S

Garuda said:
Now the plan is to booster forever.

Here we go again, round 2. These insane eugenicists have a sick sense of humor and are literally mocking their followers with their blatant and endless lies. This is their form of Darwinian natural selection as they cruelly cull the herd, beginning with what they view as the least intelligent of the 'useless eaters.'

So it took 2 1/2 years to develop a traditional vaccine, using the Louis Pasteur method that is used for every other vaccine from Measles to the Flu to Chicken Pox.

Does that make a bit of sense to anyone?
Click to expand...

1 year after the start of vax tyranny, where did Novavax recruit unvaccinated people for their test trials? Can't imagine there are unvaccinated volunteers left.

inthefade said:
This is what we guessed what would happen. Too much money involved.
Click to expand...

Damn, you mean what we have been saying the whole time?

Other Christian
Gold Member
Hoisted by their own spike proteins...

Vaxxed Tour De France competitor Victor Lafay, 26, retires – “I find it hard to breathe. I lack oxygen, I have pain in all my legs, no strength. All the COVID tests are negative, it could be something else We are many in the group who have the same symptoms.”

This morning, the German Federal Ministry of Health posted a stunning tweet, admitting that 1 out of every 5,000 Covid jabs cause “serious side effects.”

Catholic
The German Federal Ministry of Health is lying.


German Government Admits Covid Vaccines Cause Serious Injury for One in 5,000 Doses – But its Own Data Show the Real Rate is One in 300 Doses​

The data from this monitoring tool were included in a Europe-wide report on vaccine safety published last month; they showed that 0.3% of vaccine recipients in Germany reported at least one serious adverse reaction to the first dose of the vaccine. The report states:

Of the 520,076 participants from Germany who had received the first dose of a COVID-19 vaccine, 1,838 (0.3%) reported experiencing at least one serious adverse reaction. A total of 1,191 (0.2%) and 39 (0.2%) participants receiving BioNTech/Pfizer and Moderna respectively reported experiencing a serious adverse reaction while 608 (0.7%) receiving AstraZeneca reported a serious reaction.

These German figures are in line with the overall rates across Europe, according to the report: “Across the sites 0.2-0.3% reported at least one serious adverse reaction after receiving the first and/or the second dose.”
However, note that a rate of 0.3% is 15 times higher than the rate of 0.2 per 1,000 (i.e., 0.02%) quoted in the tweet. If the figure in the tweet comes, as we supposed, from a passive reporting system (which seems likely as the tweet directs readers to the PEI’s passive reporting portal), this would be an under-reporting factor of 15, which is about what we expected.

But why, then, is the German Government using the 0.02% figure instead of the 0.3% figure from its state-of-the-art vaccine safety monitoring tool when drawing attention to vaccine side effects? I’d like to think that question didn’t answer itself.
M 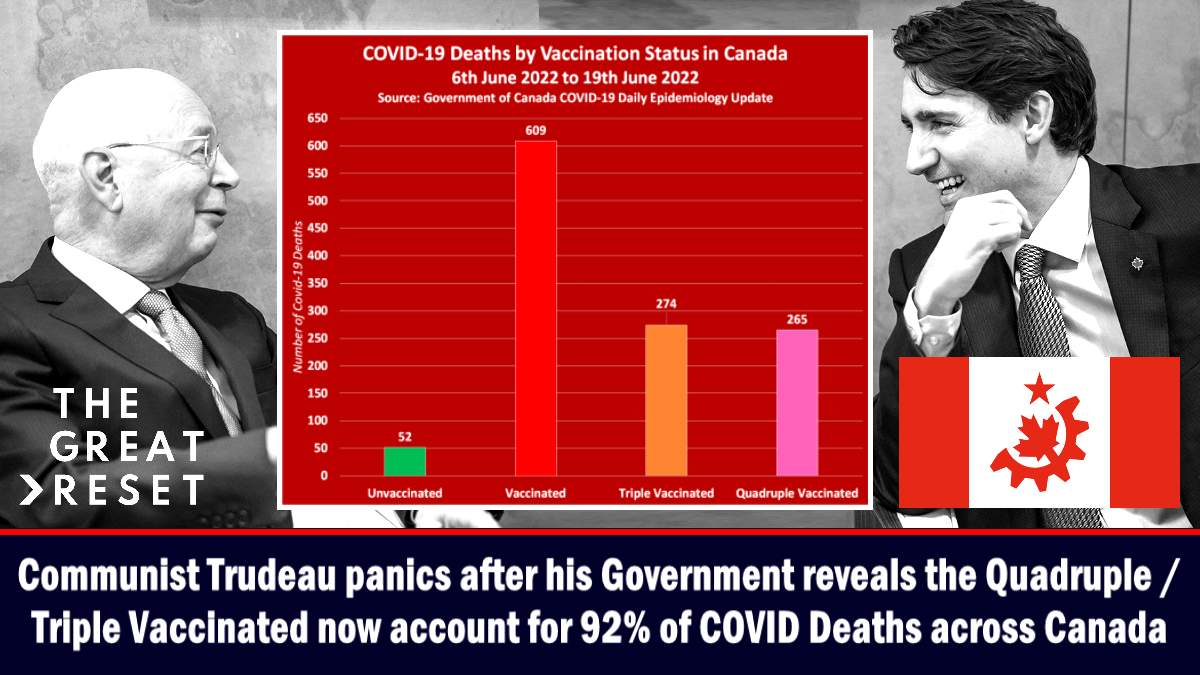 The latest official figures published by the Government of Canada reveal the vaccinated population now account for 92% of Covid-19 deaths across Canada, with ne