Mississippi’s Hospital System Could ‘Fail’ In 10 Days, UMMC Warns As Feds Rush In​

Literally read this constantly for the last 18 months. Who would still fall for this?

She has that plastic satanic look like Whitemere. "Early life" says Irish Catholic but the husband is 'polish' with lots of financial interest in casinos...

If it's possible the people of New York are going to get a worse governor than Cuomo - we don't know why globalhomo wanted him out but w do know that whomever globalhomo installs will carry out more globalhomo.

DenizenJane said:
Literally read this constantly for the last 18 months. Who would still fall for this?
Click to expand...

DenizenJane said:
Literally read this constantly for the last 18 months. Who would still fall for this? 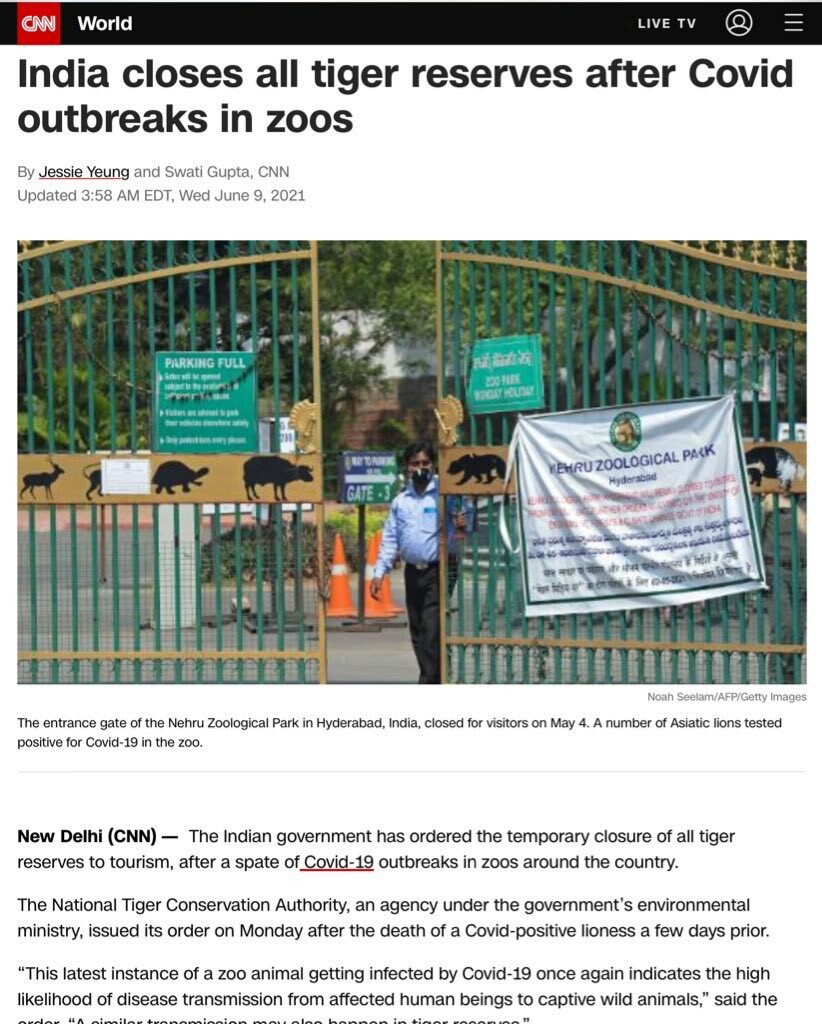 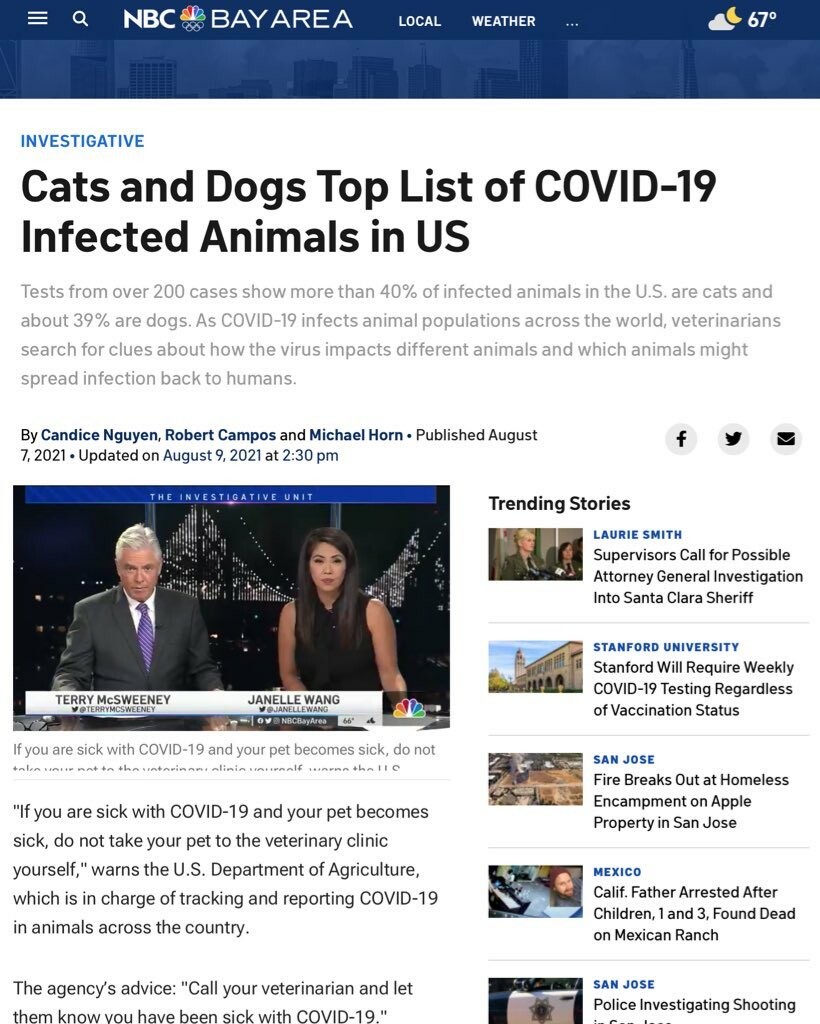 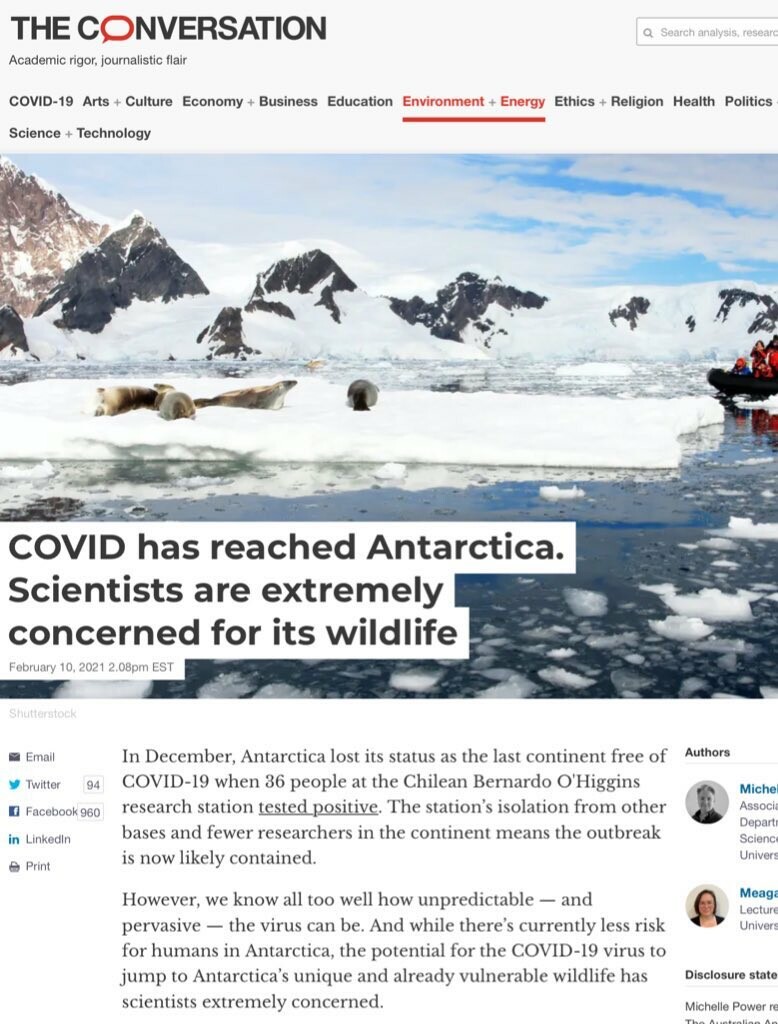 DanielH said:
Oh no! They painted the map red!
Click to expand...

''Engulf'' look at the words they use. It's all a word game. Engulf, like a tsunami. Moreover, red of course, to signal the color of alert/danger. 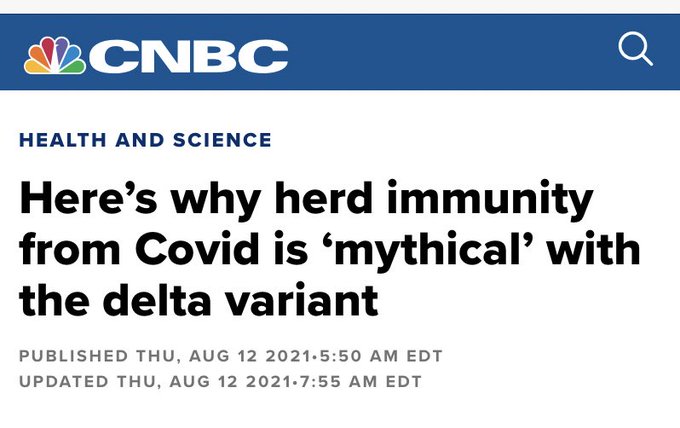 Achieving herd immunity with Covid vaccines when the highly infectious delta variant is spreading is likely to be impossible, leading experts say.

It's all a made-up fiction. The animals are fine and wish that people would stop making up stories about them having a virus that can't be properly tested for.
W

Achieving herd immunity with Covid vaccines when the highly infectious delta variant is spreading is likely to be impossible, leading experts say.

Wait until white liberals are told they have to mask their dogs in the dog park.

I am sure moderna is working on a 30.00 a jab mnra doggie vaccine now.

wayfaringstranger said:
Wait until white liberals are told they have to mask their dogs in the dog park.
Click to expand...

They would do it too cuz they're so lame and brainwashed. 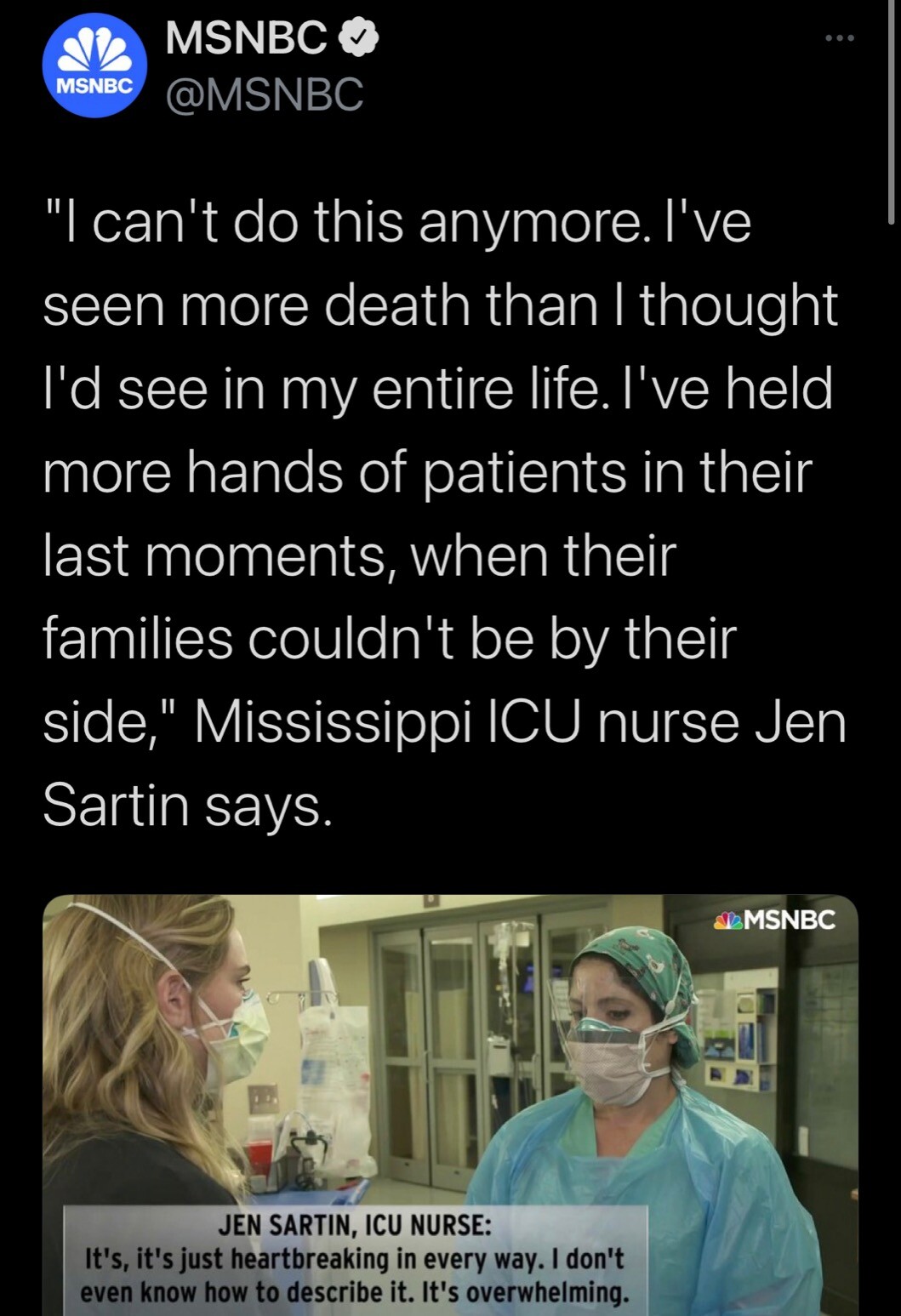 Orthodox
A proper moral compass sees that the world today is mostly populated by people in serious moral decline; and who also - by default - have defective mental capacities. When said people start any kind of movements, including popular ones like 'COVID pandemics' and the responses thereto, these movements cannot be anything but degenerate. For just this minute, forget every other argument for or against what's happening in the world right now, and just see how a proper moral compass alone can assure anyone that the COVID narrative must stink to high heaven, if only because the people pushing it are far from being Christian and could not possibly be thinking straight.

In short, and speaking more generally now, a deeply immoral world, filled of course with deeply immoral people, will only produce garbage out whatever it touches. Anyone who still thinks that titles like doctor, politician, scientist and journalist still stand for anything good have failed to account for the overall moral decline in this world.
C

What the..... did they go there and do PCR tests on polar bears or something... lol

Other Christian
These threads are becoming echo chambers of doom.

Look, society was sh*t before, women were arrogant, politicians pathetic nonces, corporations were commie perverts, towns were ugly zombielands, beer was full of chemicals, mens fashion had become feminized, women had become exhibitionist ghouls, kids stared at video games for their entire childhood, music was degenerate lyrics with a hook, work was soul-destroying repetition, stop hoping for it to continue but despair at the nature it had become. So what if it’s all gone too sh*t, so f*cking what, who cares. Good riddance to it.
Fear not death, it was coming anyway.

Now what am I going to DO?
(Sorry, for the immoral language)

Sa6re said:
These threads are becoming echo chambers of doom.

Look, society was sh*t before, women were arrogant, politicians pathetic nonces, corporations were commie perverts, towns were ugly zombielands, beer was full of chemicals, mens fashion had become feminized, women had become exhibitionist ghouls, kids stared at video games for their entire childhood, music was degenerate lyrics with a hook, work was soul-destroying repetition, stop hoping for it to continue but despair at the nature it had become. So what if it’s all gone too sh*t, so f*cking what, who cares. Good riddance to it.
Fear not death, it was coming anyway.

Now what am I going to DO?
(Sorry, for the immoral language)
Click to expand...

Well, you're not wrong about anything you said but I definitely don't feel better after reading it. I think I'll have a cookie.

Non-Christian
I think the healthcare system might indeed be strained if not collapsing right now. Read into the dead middle of each and every coovid hospital scare article from the last week, and you'll see they admit that its staffing, not beds. There's no mention of equipment shortages either.


Occam's razor; The entire healthcare field was told vaccine-or-get-bent-and-leave. I think a significant portion just got bent and left. But the news cannot CANNOT say this. Additionally, its a dumb idea to blackmail a field that's known for stacking really large paychecks really fast who can skate out at any time.

Its a disaster for sure, but the silver lining; No, not everyone is just rolling over with their employer's new Beast System demands. Hopefully that's clear.


Just remember if we have a general collapse of supply lines, services, and construction very shortly, as in a couple months, its most likely a mass purge of refusers from the workforce.

The media will obfuscate this and pretend not to know what the hell happened. They are doing it right now.

Other Christian
I've come to the conclusion that the majority of stories you read about poor afflicted hospitalized people expressing their regrets for not receiving the poison injection are entirely fabricated with staged or stock photos.

Some of the nonsense you read now is astounding: 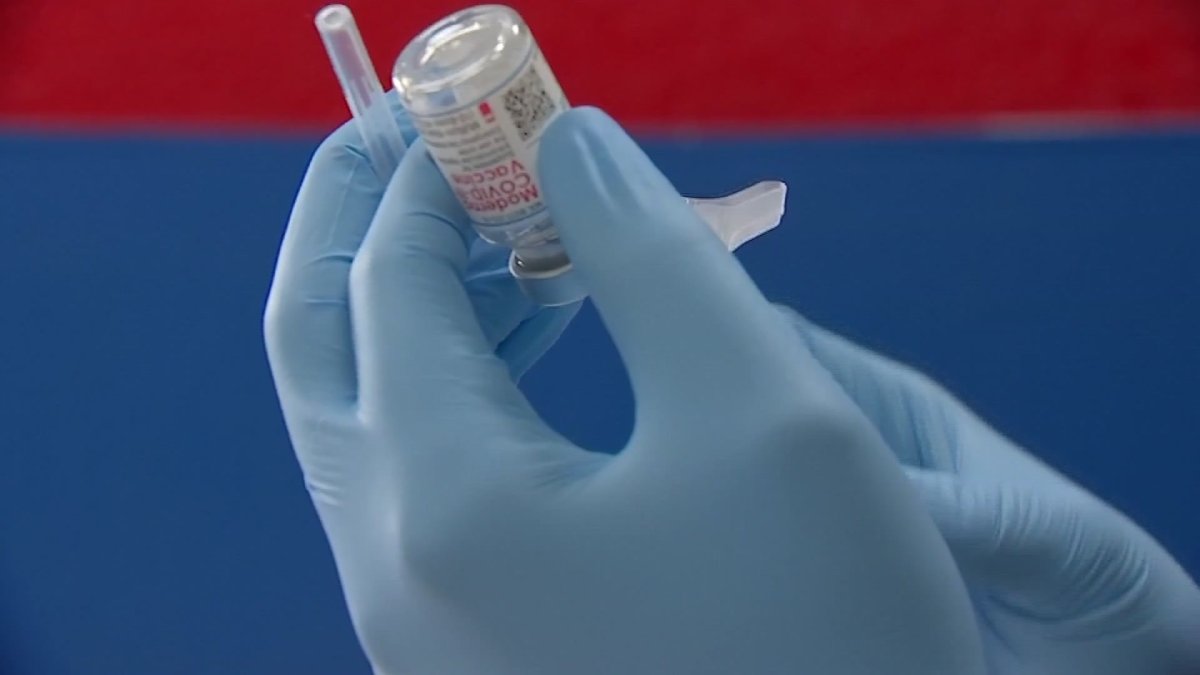 In what some are calling a “lifesaving” decision, the U.S. Centers for Disease Control and Prevention’s Advisory Committee Friday approved a third COVID-19 vaccination dose for those with weak immune systems or who’ve underwent an organ transplant.

This filth which details the joyous reactions of Illinois residents to the third infusion of poison includes the following:

Bob Rosenthal of Hoffman Estates has been staying away from family and friends for more than year because the medication he takes makes him immunocompromised.

“We don’t know if it’s truly going to work or not,” said Rosenthal. “My hope is it will, but I’m going to follow the science.”
Click to expand...

Try to read all of that with a straight face. The first two injections were utterly pointless, but third time's the charm! I have no idea if it works but I might as well try! These quotes remind me of the section in the Onion where it's the same 3 photos of people with the names and locations changed every issue with some dumb quote. Did a real person spontaneously say that? I suppose that with the level of programming he's been subjected to it is possible for someone to speak entirely in killer virus narrative talking points.

Later on we read:

Dr. Sajal Tanna, an infectious diseases doctor at Northwestern Memorial Hospital, said some patients may not form the antibodies. Therefore, it’s important to continue to wear masks and social distance.

“It is not a substitute for basic health measures we’ve been following for the last year and half. We don’t know the level of antibody needed to protect and say you won’t get a breakthrough infection,” said Tanna. “We don’t have a magic number.”
Click to expand...

Some patients may not form antibodies? How many? So it's not a substitute for masks and social distancing? What then is the point?

This is just manufactured propaganda created by writers in a room. What about all these people reporting their regrets? How exactly does the local NBC affiliate find them? Do these people contact the station eager to tell them all about their story? Does the hospital violate the law and inform the station? Hey guys wait till you hear about this one guy I treated last week! 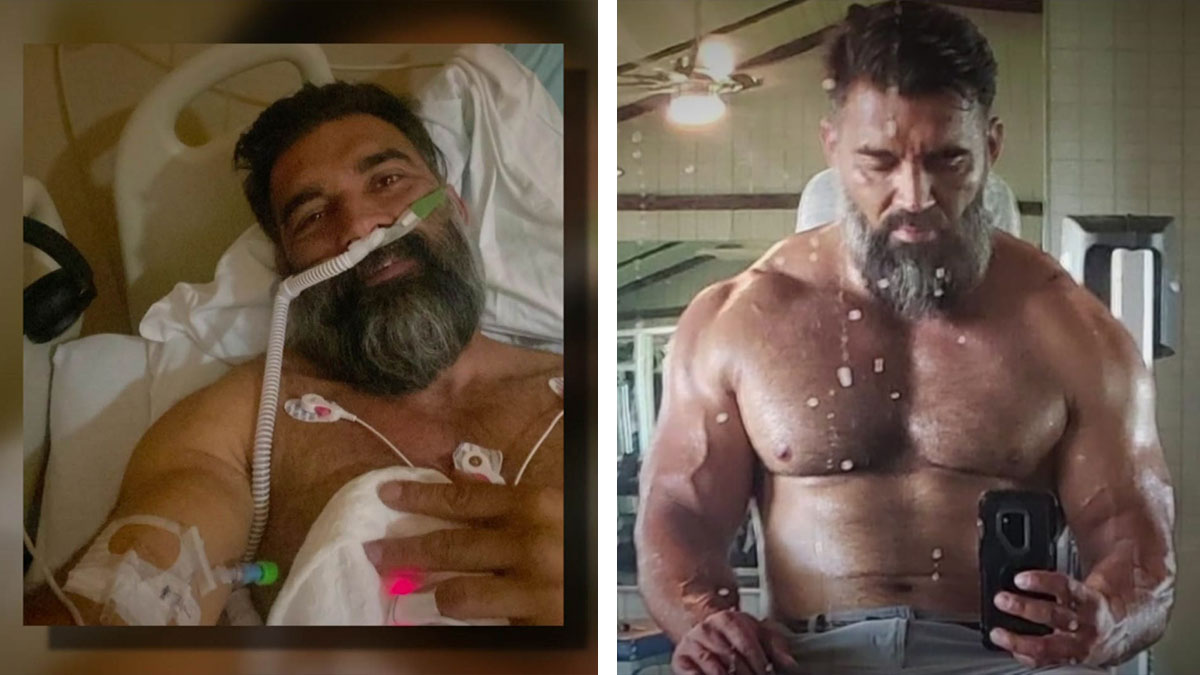 A North Texas fitness trainer, who nearly died from COVID-19, says he regrets putting off getting vaccinated.

Antonio Rodriguez never thought he’d get COVID-19. The 44-year-old owns Toro Sports Performance gym in Weatherford. “I train athletes. I stay pretty active. I hardly ever get sick. I don’t get the flu or colds. I don’t even have allergies,” said Antonio Rodriguez. He finally decided to get vaccinated. But he tested positive for COVID-19 a few days before his appointment. “So instead of getting the shot, I called the ambulance,” said Rodriguez.
Click to expand...

But seriously, how did this NBC affiliate hear about this story? The same for the hundreds of these produced every day. Everybody who regrets not getting the poison just goes to their local news station as a matter of course now? Do you believe this?

He hopes his story can save even one life. “If you’re still thinking about it, go ahead and get it done. It’s not worth it. I’m a great example of that. I was thinking I’m invincible. This thing almost killed me. Just go ahead and get the vaccination,” said Rodriguez. He said he plans to get fully vaccinated as soon as possible. Doctors expect him to be released from the hospital in a week or two.
Click to expand...

Phew, that was a close one. Glad to hear Antonio is going to pull through! These made-up stories have this absurd after school special feel to them that makes them very hard to take seriously. I'd love for someone with the time and web-crawling skills to uncover what I suspect is happening which is the use of the exact same wording in these articles. If anyone has seen the video about the 11 news outlets all reporting the same story about Amazon word for word, your opinion of the media will be permanently altered. I trust something similar can be done here. 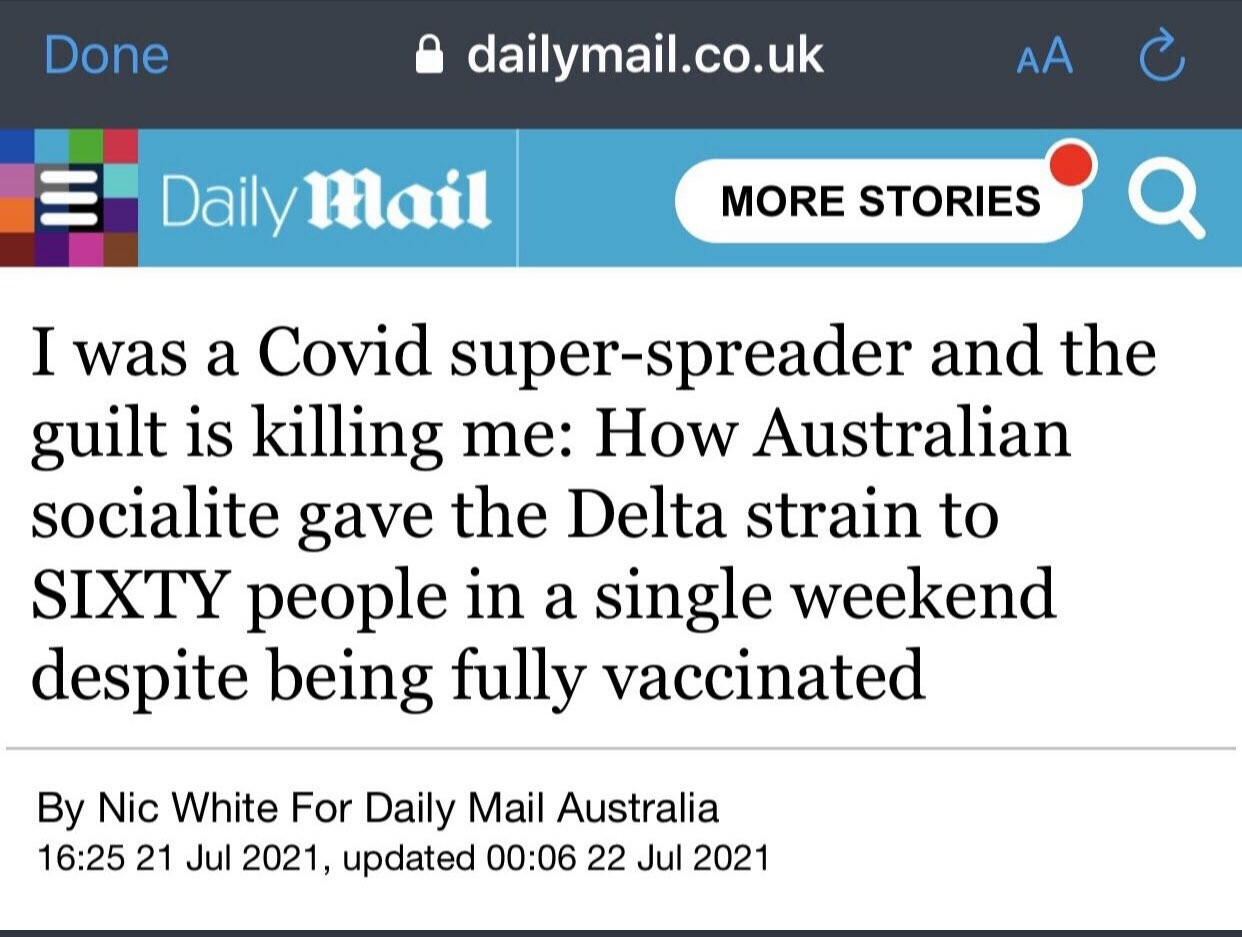 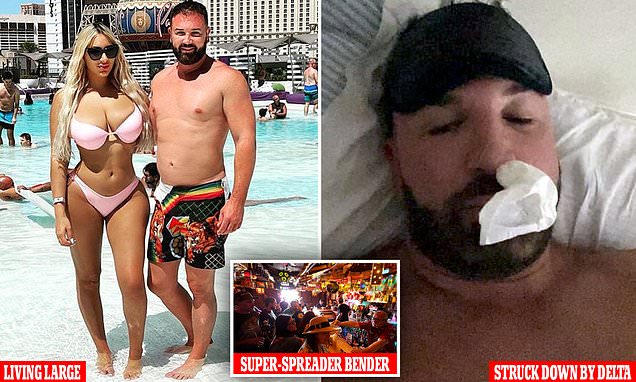 Anthony Hess, 40, unknowingly spread coronavirus to at least 60 people in a single weekend bender of parties in Los Angeles, where Covid is getting a resurgence through Delta.