Protestant
Everyone thinks they're a genius when they barrow money at a lower rate than they can earn with it in the short-term. They all act like they discovered fire. Then come the liquidations...

BURNΞR said:
Glad I never touched LUNA. I never understood it and don't like things associated with stablecoins.
Click to expand...

BURNΞR said:
Glad I never touched LUNA. I never understood it and don't like things associated with stablecoins.
Click to expand...

It's definitely a complex crypto project and I don't understand it all either. They do have a large pile of bitcoin, and also it seems less shady than Tether at least.

Other Christian
The left and MSM absolutely hate crypto and are starting to gloat:

Other Christian
Well, this is my first brutal bear market so let's goooooo. Even if it dips another 50% I'm still in profit thanks to doctor Benjamin Cowen's advice back in April of 2021: ''There's a fine line between being a genius and an being an idiot in Crypto'', that struck me and I sold half of my positions near the top. That and my dad telling me he wanted to buy Dogecoin at .67 cents.

Penitent said:
I'm thinking of taking a position in LUNA now. I don't know, from $120 down to $1.20 currently...couldn't get much better of a sale price.
Click to expand...

I'm slurping up the dip like crazy. BTC and ETH too. Once in a lifetime dip I think.

Seeker79 said:
I'm slurping up the dip like crazy. BTC and ETH too. Once in a lifetime dip I think.
Click to expand...

Some analysis from Willy Woo:

1w RSI is now 32.5. It's almost never gone that low, and when it does it's been the buying opportunity of half a decade. With changes in the cycles and possible recession being pushed by The Federal Reserve, maybe this is going to go lower. But I would be quite confident buying now if your horizon is at least one year.

LUNA also worth a pop. Even BitConnect had a nice pump when it crashed. 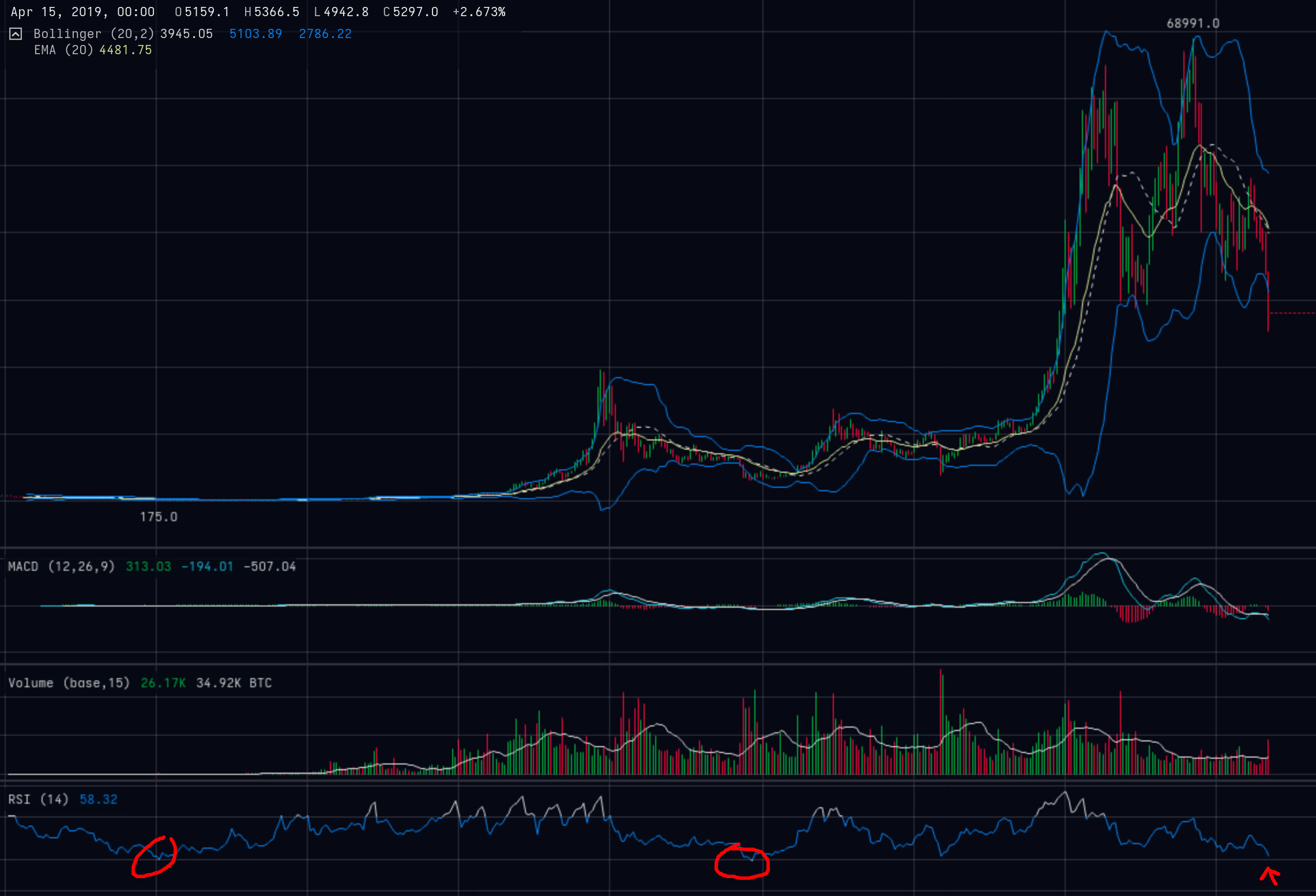 Orthodox
Yes, it could go to 23 or 24, but I see support at the 28 level, and I say we climb (for BTC) now. I still don't see the crash that everyone is claiming might happen, I personally take Greg Mannarino's view, the biggest and final crash will happen when the debt market finally implodes. My speculation, for what it's worth, is actually a final run by the S&P from here to go to all time highs for the last time, and a crash in Q2 2023.

That's when we decouple.

Agnostic
I would not touch Luna with a ten foot pole. It's price has hit zero ($0.019 as I write this) and now the Terra blockchain has been suspended.

There was some dude on 4chan that claims to have lost 350k USD because he wanted to transfer funds and figured UST was the affordable (fees) and fast (transaction speed) way to go. He didn't even touch LUNA and now he is bust.

bucky said:
The left and MSM absolutely hate crypto and are starting to gloat:

That's fine except stonks have also fell off a cliff and we both know housing is next. It's hard to gloat when everything is falling.

This downturn presents a good buying opportunity - anyone got anything on the crypto shopping list?

This thread reminds me of the Doge coin millionaire. That guy giving investment advice is the best!

Here I heard another good one. Buy a shitcoin after it falls 99%.
Last edited: Thursday at 9:08 PM
P

BURNΞR said:
This downturn presents a good buying opportunity - anyone got anything on the crypto shopping list?
Click to expand...

I'll be accumulating Monero, and probably more BTC and ETH.

joost said:
This thread reminds me of the Doge coin millionaire. That guy giving investment advice is the best!

Here I heard another good one. Buy a shitcoin after it falls 99%.
Click to expand...

Honestly, buying trash just because it's cheap isn't a good idea. For example, the erc20 token Waifu Token (WAIF) is down big time. So is Digital Reserve Currency (DRC). DRC is down approx. 97.3% since last year. Most erc20 tokens are bleeding badly. I don't understand how Uniswap and Kyberswap are still afloat.

I'd rather stick to something with an actual use case. Monero is fungible, untraceable, the #1 coin used on the black markets, and is actually used as a currency.

Protestant
Gold Member
The following was posted in the /biz/ XRP schizo thread (it was funny)
Judea and its western allies have been watching you ALL very closely since the inception of this XRP dedicated thread on 4chan. We have a much reduced interest in your Reddit and Twitter counterparts as they appear to lack key elements we deem worthy of dedicated surveillance. Several of you have ignorantly doxxed yourselves already, but make no mistake, all those who have posted from their residences have already been identified. Your false sense of anonymity only breeds confidence in sharing your unfiltered beliefs. There is no word for anonymous in the Hebrew language.

While we do not approve of your deeply hateful anti-Semitic remarks, we do appreciate and recognize your dedication to our project as well as your disdain for psychopathic individuals. Your apparent schizophrenic ability to identify the Standard and track its progress with precision has proven to be mildly impressive. With that said, we also find it very contrarian and disingenuous that several of you praise our Hebrew brother, David Schwartz, and yet criticize our race and religion, often times within the same thread. This is a sign of confusion and displays a total lack of respect for those you seek to profit from. How does the old goyim saying go?

>Never bite the hand that feeds you

Due to our innate humanitarian tendencies, we wish to provide you with an opportunity for amnesty and redemption, as we believe many of you are simply misguided individuals who only need proper guidance to avoid a threat classification by our team, following mission go-live. Once operations are in full effect, your new found wealth will not be the only thing that FINDS YOU. Tread carefully goyim, we will not make this same offer twice. Repent for your foolish transgressions against Judea, swear to follow the Seven Noahide Laws and publicly announce your allegiance to the State of Israel and in turn, the entirety of Judea itself.

bucky said:
The left and MSM absolutely hate crypto and are starting to gloat:

It's amazing what a turn the left did. Ten years ago Elon Musk was a practically a God, and they prayed at the alter of tech "disruption", Bitcoin no exception. Now they love bankers, and the foremost marketer of electric vehicles is public enemy number one.

What a crazy day in crypto. Feel bad for retail that got royally screwed by UST. Then again, 20%?

Bought some XMR today. I am seeing fud around tether as well.....feels like a temporary low, but who knows. In any case I will be happy to continue accumulating the coins I believe in through the bear market.

It's much comfier once weak hands get washed out.

Some notes to self:

Hindsight is 20/20. Next cycle is ours roosh bros.

I'm a Bitcoin maximalist but I understand the utility of some coins (Monero is the only I respect since there's use AND adoption). But then I hear about all this shitcoins with fancy names, big concepts (that mean crap) and people thinking they're genius for entering the ponzi in the beginning.

You do lose when your shitcoin goes down 99%, even if you don't sell.

I don't hate the game (scammers getting rich from naive "investors"). I get upset when fellow members here push others to join the Ponzi scheme.