bucky said:
What a total Чад.
Click to expand...

Hey, for once my little bit of knowledge of Serbian (cyrillic alphabet like Russian) comes in handy. To save others going to Google translate or whatever, that word is "chad." Well said!
U

stugatz said:
Yeah, you actually see masonic lodges in black communities somewhat often. I always wondered about that. (Milwaukee actually has a very tacky Shriner's Temple in the middle of the west side that looks like a garish mosque, although that part of town wasn't always full of vibrants.)
Click to expand...

Is that the one on Wisconsin Av.? Never really paid attention, but I thought it *was* a mosque! Yeah, it's a vibrant area, with the exception of Marquette Univ. nearby. The mostly White students at MU make good targets for the vibrants, of course.

unit414 said:
Hey, for once my little bit of knowledge of Serbian (cyrillic alphabet like Russian) comes in handy. To save others going to Google translate or whatever, that word is "chad." Well said!
Click to expand...

Just having a little fun with a fun story. On a serious side though, it makes me think how the USA and Russia likely would be something like Christian nationalist allies standing against globalism at this point if Trump hadn't been a total coward and gone along with the "Russia bad" narrative in a foolish attempt to get his enemies to like him. In 2016, normal everyday Russians very much wanted this, and salt-of-the-earth Americans would have too if Trump would have had the courage and virtue to fight for it.

Of all the insanely evil things the globalists have done and all of Trump's cowardly failures, I think missing the opportunity to cooperate and be more friendly with Russia might be the one that makes me the most sad and angry.

unit414 said:
Is that the one on Wisconsin Av.? Never really paid attention, but I thought it *was* a mosque! Yeah, it's a vibrant area, with the exception of Marquette Univ. nearby. The mostly White students at MU make good targets for the vibrants, of course.
Click to expand...

I know about this from growing up Deep South. Any black person of any notoriety in the community more or less has to be a member of the lodge. Same deal in the military where holding a senior NCO position for any POC unofficially requires that they be a Mason.

A black former police officer being interviewed by the BBC regarding the Chauvin verdict turns the script. @3.12 the interviewer, flustered by now, attempts to slide in systemic racism and gets blown out of the water

MusicForThePiano said:
This could all be dog and pony show, but the blacks are assaulting and killing much more than usual, which seemed to be the end goal of this little play. The whites are more guarded, jaded, and mistrustful (the smart ones) or on their knees submitting to self-extinction. At the end of the day, nothing was achieved except a further divide between white and blacks by activating both races most negative traits, the blacks being animalistic violence and chaos, the whites being sullenness, brainless compliance, and betrayal. We are a far cry from the days when the Sons of Confederacy would hold counsel with the Black Panthers on what to do amicably about this issue. Now its just the uber rich living out a protected existence while race war ravages the masses, soon to be followed by religious war, and the growing medical war, all of which these assholes are exempt from.
Click to expand...

I believe the end goal is to show the black people, who are already murdering other black people without anyone caring, that now it's safe to murder asian and white people with no consequences either:

Chauvin was always doomed, just due to the hyper-liberal city he happened to live in and serve as a cop. I visit Minneapolis and am familiar with the prevailing politics. He obviously would have been screwed in cities like Portland and Seattle as well. Would have been found guilty in spite of the facts. Liberals don't deal in reality.

But this pic of the juror is priceless. Looks like a little black homo. Officer Chauvin never stood a chance. Fun fact: I was rejected from the last jury pool I was called up for, because defendant was black (of course), and I expressed some very pro-cop sentiments while being interviewed in the group setting. A black dude sitting next to me was not happy when I said "the cops I see show amazing patience, and are very respectful to people who are acting out and don't really deserve any respect."

This whole trial is just a show/entertainment to appease both sides.
U

Here's an article about the dindu juror who lied to get on the jury, and was in reality a big-time BLM supporter. Between this and Maxine Waters running her big mouth and calling for a guilty verdict before the trial was even over, there is huge justification for the charges to be thrown out and another trial commence. And I would like to see the trial venue moved to somewhere less hostile toward cops and less liberal-biased than Minneapolis. Hey... they moved OJ's trial to a blacker area instead of the mostly-white municipality where he committed the murders. So let's move Chauvin's next trial to the burbs.. or even further out, where he has chance. But I won't hold my breath. 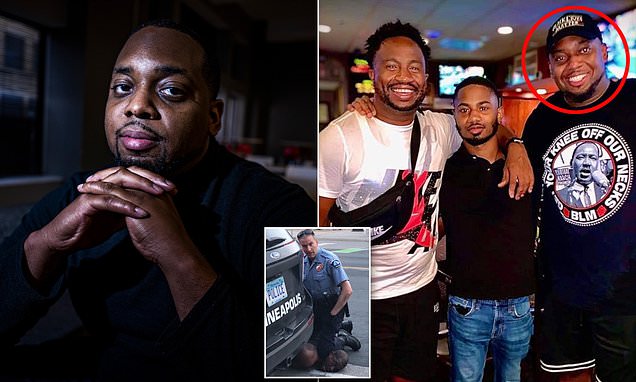 Brandon Mitchell, 31, is pictured on August 28 wearing a T-shirt with a picture of King and the words, 'GET YOUR KNEE OFF OUR NECKS' and 'BLM,' for Black Lives Matter.

This was from last summer, right? Sounds familiar.

Gold Member
So how many millions and how many more is that juror going to cost tax payers not to mention the chaos it’s going to create when he is the reason why Chauvin is re-tried.

That idiot is going to get into trouble for all of this right?

I’m starting to think that if I just get a really dark tan I can get away with anything and get every advantage now....
Share:
Twitter Email Share Link
Top