Certainly deserves a spot on the Who would you hate fuck thread.

I would bang raw though. 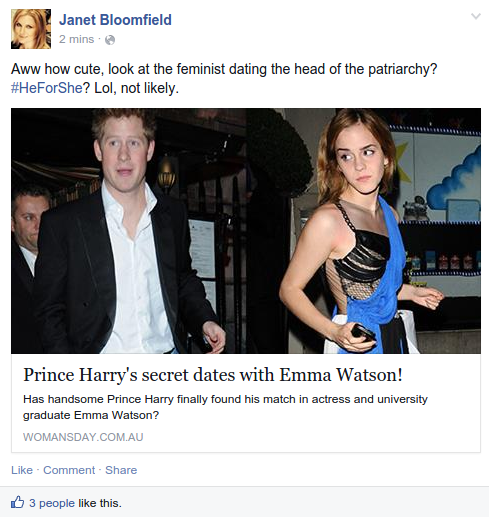 It's still funny that she goes from pro Rugby Player to billionaire party prince Harry and has the gall to recommend feminine men for all other girls.

By the way - Prince Harry's approach method is fine. How else are you going to bang Emma Watson if it's not set up by someone? At least men with means or fame can do that. It's not like most of us can just point to a celebrity and get a date or meeting arranged. You still need to do the work to seal the deal and he is certainly the more Alpha of the two brothers.

I forgot one thing.

Emma may preach to the masses about how independent, strong and passionate she is about feminism and womens issues but at the end of the day she and the rest of her (pretty) ilk love one thing.


A good, hard dicking by a man who isn't a chump.

Go on'arry, fuck her gently like you would caress your Apache in battle. 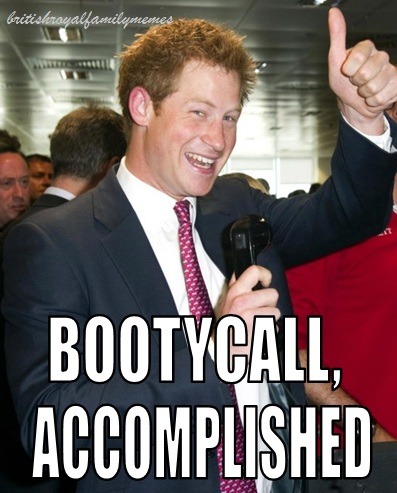 Prince Harry is really leveraging his status to land dime pieces I can only dream of! 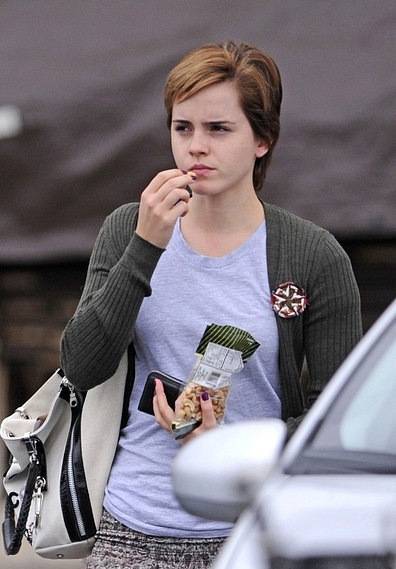 Disco_Volante said:
wow Im jealous, Prince Harry is really leveraging his status to land dime pieces I can only dream of!

Gold Member
Like Good Looking Loser recently posted, celebrities are not nearly as good looking as you think they are.

That last pic was rather not favorable - she regrew her hair as likely some High Value Men decided to not be impressed with her gaining weight and having a mullet. That's better Emma. Prince Harry does not want to bang a girl who looks like a feminist. Your childish words are forgiven - you can be all the feminist you like as long as you follow my lead sugar.

Harry was in the military, apart from being a wealthy patriarch.
Here he is with tools of war, prepared to inflict violence and death on an enemy.


It appears strength and violence are turn-ons for Emma.

gee, I thought being meek, intellectual, polite, and letting her take charge would be the way to her heart:huh: Im confused....

Surely an educated, intellectual beacon of feminism would prefer to date a member of the chess team than these brutish men, right?

She's an intellectual, she doesn't fall for masculine archetypes like soldier and athlete :tard:
P

Certainly deserves a spot on the Who would you hate fuck thread.
Click to expand...

She is cute as hell. I wonder where her movie career is heading. Hope she isnt typecast into her Harry Potter role. Maybe she will do something sexy like a sex tape or go Lindsay Lohan.

Hypocrisy like this is expected. A girl will throw around shit like 'strong', 'independent', and 'against the patriarchy', but they all want a strong man who will lead them, grab them by the hair, and bang the shit out of them.

She can posture all she wants, but it's biology, and you can't argue with what's in your DNA.
H

Lord_Perseus said:
When I saw this I just laughed & laughed. You have to admire the shameless audacity of this woman.

Prince Harry is secretly dating Emma Watson after sending her an email to invite her out when she split from her boyfriend.

At least that's according to a completely unconfirmed Australian magazine report, which quotes a breathless unnamed insider as saying that the fourth-in-line to the throne is 'smitten'.

The report from supermarket aisle magazine Woman's Day has sent the internet rumour mill into overdrive and it has been picked up - rather skeptically - by websites around the world.

According to Woman's Day, Harry, 30, asked the Harry Potter star out after hearing she had broken up with previous boyfriend Matthew Janney in December last year.

Apparently, Miss Watson met with the prince with a group of 12 friends and they have been meeting up in secret since.
Click to expand...

Such mendacity. "You be good little betas & women will love you for it now excuse me while I go hop on the dick of my prince, the guy i'm dating now after I dumped my ex-boyfriend the alpha jock
Click to expand...

Did some more digging, the hypocrisy gets even more hilarious.

Who do you think is Emma's best friend? The type of girl she surrounds herself with?
Given Emma is a smart, 'nerdy' intellectual feminist what is your guess? Law student? Environmental activist? Med student?

It is Sophie Sumner, a tall skinny blonde model who dropped out of oxford.

"Oxford where she met and befriended Harry Potter actress Emma Watson. Throughout her time at Headington School, Sumner was occasionally mocked for her slim figure and mousy brown hair.[citation needed] But being an active member of the school's field hockey team increased her self-esteem drastically. After going on a summer vacation to Penetanguishene, Ontario, Canada Sumner began colouring her hair blonde. Sumner had plans to complete a degree at Exeter University, but decided to defer it to focus on modelling after successfully auditioning for Britain's Next Top Model. "

Apparently Sophie didn't get the memo about education empowering women, as she dropped out, dyed her hair blonde and pursued a modeling career. Guess getting attention from high-status men is more fun than having a real 'empowering' career.
Emma's advice for women to be educated only applies to ugly girls, her hot friends are given a pass.

Emma prefers to surround herself with good looking, skinny models who dye their hair bleach blonde.
Emma can lecture the United Nations on how women need to be valued for more than their beauty, but fuck that. She's high status and doesn't want ugly low-status girlfriends. Probably some smart girls in the engineering department should could befriend, as she would value them for their intelligence and not their lack of beauty, right?

If you're not a muscular jock, future King, or skinny model youre going to have a hard time getting Emma's attention.

The rest of your suckers should value women for their brains though...:whip:
P

Gold Member
And the hypocrisy continues, with the media revealing Watson is dating a man 10 years older than her.

HARRY Potter actor Emma Watson has reportedly fallen under the spell of an American tech wizard — who is ten years her senior.
The 25-year-old starlet is said to have been dating William ‘Mack’ Knight for the past four months, with the couple recently returning from a week-long romantic trip to a luxurious, eco-conscious Californian retreat Post Ranch Inn.
Click to expand... 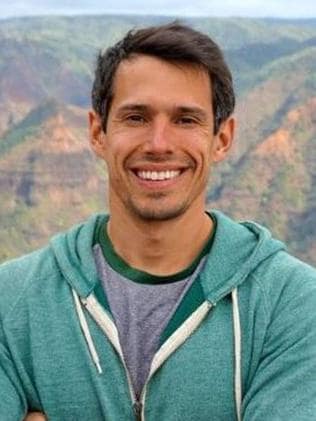 Dude may lift. Did we mention he's a senior manager at a tech company?

Watson loves that Knight is just a “normal, down-to-earth guy who has nothing to do with Hollywood”, a source told The Sun.

The source said it took Watson more than a year to feel ready to start dating somebody again after the “horrendous” break up.
Click to expand...

Rugby players, literal princes, much-older-than-her provider partners...judge women -- and all people -- by their actions, not by their words. It will be interesting to see how long this lasts and whether she leaves him because he's boring.
E

Gold Member
Good for him.

He should try to impregnate her immediately.

Hopefully that week long romantic trip wasn't for nothing.
S

Gold Member
I'm still holding out on the idea that she was given a choice if she wanted to stay relevant:

And she chose the first one. 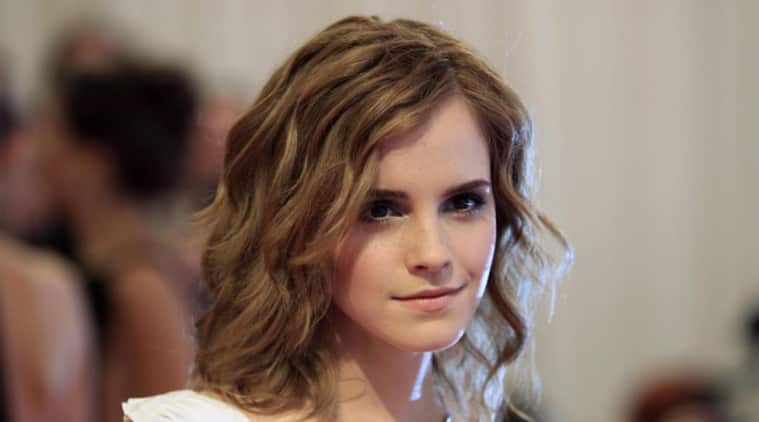 Gold Member
Don't get me wrong WB if I didn't have to put any work in but she doesn't do anything for me. My schlong cannot respond to fame. I'm checking out the Hairy Twatter parody instead. I hope it's actually funny instead of just professional sex. I have high hopes looking at that guy's shit eating grin!

ChickenLover9T9 said:
Don't get me wrong WB if I didn't have to put any work in but she doesn't do anything for me. My schlong cannot respond to fame.
Click to expand...