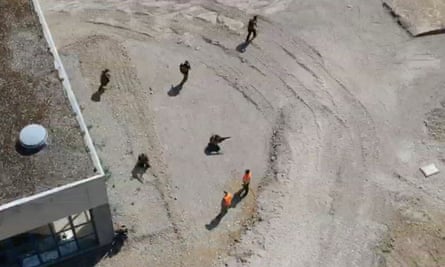 A still from drone footage showing men in military-style gear moving in formation at a former barracks in Mosbach, southern Germany. Photograph: Monitor


35
A German former elite soldier who called himself “Hannibal” in chat groups is set to be fined and barred from carrying a gun for organising an illegal “prepper” training exercise.
André Schmitt, a former member of Germany’s special forces command, and five former members of his network have been issued with penal orders over a civilian combat training session in the southern town of Mosbach in the summer of 2018.
The Guardian and the German broadcaster ARD published exclusive drone footage of the illegal exercise at a former German army barracks in December. 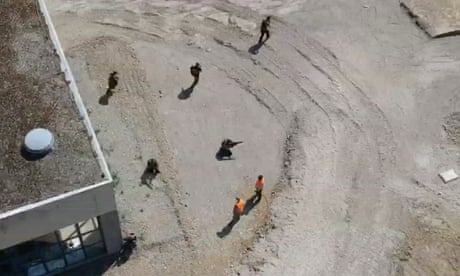 Schmitt’s network has been on investigators’ radar since 2017, when police uncovered plans by the German army officer Franco Albrecht to pose as a Syrian refugee while carrying out terrorist attacks on high-profile German politicians.
During a search of Albrecht’s home, investigators found a badge for Uniter, a private group for security-related personnel with military training and access to weapons and ammunition.
Uniter’s founder, Schmitt, a personal acquaintance of Albrecht’s, was also found to have set up and administered a complex command chain of chat networks, using cloud-based Telegram software, in whose subgroups members war-gamed “Day X” doomsday scenarios and discussed the threat of Islamist attacks.
Following a string of revelations about further rightwing extremist links, the defence minister Annegret Kramp-Karrenbauer moved in July to partially dissolve the Bundeswehr’s elite “KSK” (Kommando Spezialkräfte or special forces command) wing.
When the Guardian and ARD reported on Uniter’s weapons exercises at Mosbach, the network was still officially registered as a non-profit association, a status that was withdrawn in February 2020.
In a parallel development, Uniter has since June been under surveillance from Germany’s domestic intelligence agency, which is investigating whether the far-right network had planned to infiltrate state institutions.
During raids following reports of the Mosbach exercise, investigators seized illegally owned weapons and military equipment including target lights, knives and stun grenades.
Schmitt, who organised the exercise, faces a fine equivalent to 80 days’ net income, or about €4,000 (£3,621), the broadcaster SWR reported. Once the penal order comes into effect, he would also be banned from carrying a gun for five years.
Schmitt is planning to appeal against the fine, his lawyer, Björn Hering, said. Other participants in the exercise face fines equivalent to 30 or 70 days net income.
Click to expand... 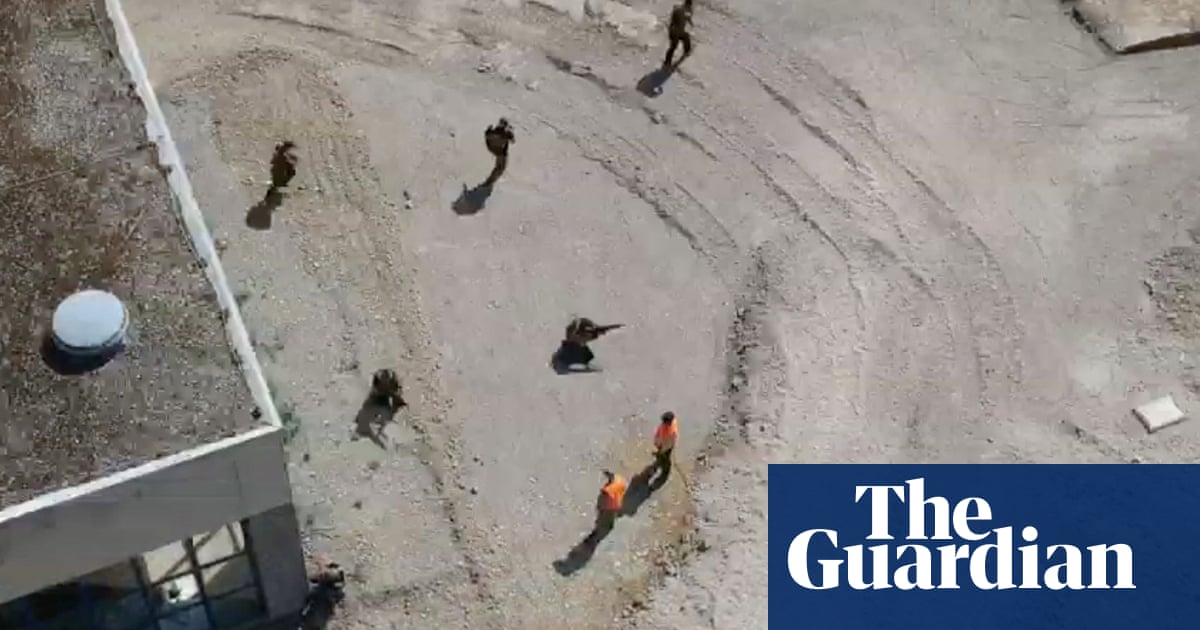 Vigilante self-defence measures are considered far-right actions, in light of the fact that much-needed immigration (to replace inevitable falling birthrates) is a sensitive topic in the country.
Last edited: October 16, 2020

This is also going on on the US on a fairly massive scale. It seems like just about every other small town has some kind of veteran led militia forming and I have hears about towns having meetings where they discuss contingency Plans for a conflict.

My name is Goy Cattleman, and I approve this message.

My name is Goy Cattleman, and I approve this message.
Click to expand...

And "vigilante self-defence"?!? That is quite an Orwellian way of putting things...
You must log in or register to reply here.
Share:
Twitter Email Link
Top