What immediately comes to mind...

I wonder if this name thing is NOT a coincidence and if this is the way to rub us this distracting AI generated clown world garbage into our faces.
T

Protestant
Who was in the wrong here?

Muslim
What else were you expecting

God's lonely asperger said:
Who was in the wrong here?

Feel like I just watched a skit from a GTA game.

'I hates these ecumenical councils! I see these gnostics
And I can't break their legs!'

God's lonely asperger said:
Who was in the wrong here?

Gabe Itches made me laugh....not gonna lie. Im a child

The Toyota War or Great Toyota War was the last phase of the Chadian–Libyan conflict, which took place in 1987 in Northern Chad and on the Chad–Libya border. It takes its name from the Toyota pickup trucks used, primarily the Toyota Hilux and the Toyota Land Cruiser, to provide mobility for the Chadian troops as they fought against the Libyans, and as technicals. The 1987 war resulted in a heavy defeat for Libya, which, according to American sources, lost one tenth of its army, with 7,500 men killed and US$1.5 billion worth of military equipment destroyed or captured. Chadian forces only suffered 1,000 deaths.
Click to expand... 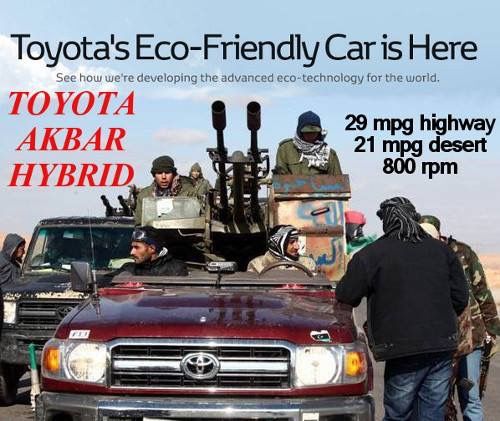