Singer George Michael has died aged 53, his publicist has said.

The star, who launched his career with Wham in the 1980s and later continued his success as a solo performer, is said to have "passed away peacefully at home".

Police say there were no suspicious circumstances.
Click to expand...

Gold Member
RIP. No suspicious circumstance? He died at 53! He had an excellent singing voice. And if were popular now, his gayness wouldn't have affected his carear as much.

I remember he was busted cruising a Los Angeles toilet.

Gold Member
^^^ That was my first question too.

He being gay, likely had aids.

Gold Member
There are been rumours in the past at least of him not testing
http://www.telegraph.co.uk/news/uknews/1563724/George-Michaels-HIV-fears-cut-from-BBC-show.html

That said it's just a rumour. For now.

Will be interesting to see what comes out of this if anything.

RIP George Michael, jeez 2016 was not a good year for musicians!

For real though, RIP. I fucked plenty of girls to Careless Whisper.
Y

A shame. I liked a number of his songs. RIP George.

This is my favourite song by him. He was popular in my hometown as we had lots of Greeks and they would always request his stuff on the radio so this song was always on when I was growing up. As a child I did not let it be known though because even as a young boy I thought it was strange George Micheal would wear makeup and look like a cartoon character, even then at that age you knew he was a fag. So just as how I enjoyed some classical music, jazz, and 80s games, I did not let that get known in the hillbilly sticks of Canada growing up.

When I started to make music myself, it was okay for me to say that was my favourite songs. Many producers liked it as well. I remember me and a gully Native dude smoking weed and making beats and just sampling a bunch of George Micheal shit, the dude has good material. I sampled a lot of Wham! stuff when I started making beats as my mother liked Goerge Michael as well and had a bunch of tapes that I would sample from.

He was a talented character. And I can always respect talent for what it is worth regardless of the person. As far as I can remember he was not a virtue signaller, he was an activist with political things as the Band Aid causes but you never heard the man try to push his personal degeneracy onto others, or at least I don't remember him doing so.

His lifestyle was off the rails, but in those days those types of dudes could partake in their degeneracy, and it was largely behind the scenes until, well, he got busted in the bathroom, or with drugs, or in an alley or someplace lol. All that stuff is typical for that set.

Him being dead at 53 is no surprise. Could have been AIDS/HIV but just, in general, gay men die off much quicker than Heterosexual straight men. Gay men have a life expectancy of around 53 years. This is much worse than much of the poorest parts of Africa, but the media or science community never reports on it (for specific reasons as they look to promote that degenerate lifestyle for the masses in hopes they partake). Those men are at high risk for all types of shit such as assault, car accidents, accidental deaths, the whole lot.

RIP, to a talented music maker.

I remember he was busted cruising a Los Angeles toilet.
Click to expand...

Likely HIV related illness or complications from HARRT. 53 is young for the wealthy. Just looked it up on Google, he was in a coma for 5 weeks a few years ago with pneumonia, and he had bad CNS symptoms for awhile afterward. He was using recreational drugs until 2014 until another health scare made him quit. Sad.

I did not know he was gay in 1985 when "I want Your Sex" and "Faith "came out and I thought his music was awesome. When he got caught in a bathroom in the 1990's it was weird to see someone whose music I loved as a kid get publicly outed like that. It made me wonder about Prince, Rick James, and Micheal Jackson. I wish HIV and AIDS did not exist, these diseases have cost so many people so much.Rest in peace George....

Gold Member
I suspect a wee but of buggery was the culprit in his untimely demise. Ironically enough a lot of his music are great mood music for getting the (heterosexual) bang. 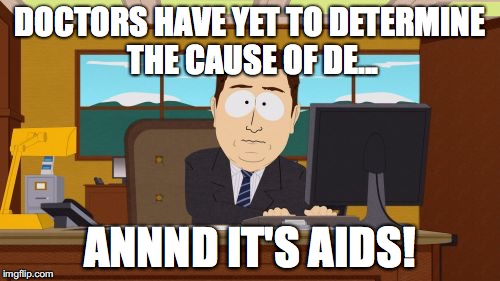