Banned
Man, I didn't know Xavier Naidoo is on the good side. I heard he became controversial a couple years ago, but not that he is one of us. Gonna listen to his music now.

Beautiful to watch. Guys, the oligarchs are making a huge mistake with this flu. Although the issue is as divisive as migration and Islam, it's not something you can consider "right-wing only". I don't even remember any politician calling the protesters "nazis". The common "insults" are enemies of science, covidiots, sectants.
H

Let's hope this won't be used as a reason for a "2nd-Lockdown". Some people believe that this protest was staged by some sort of controlled opposition.

Huginn said:
Let's hope this won't be used as a reason for a "2nd-Lockdown". Some people believe that this protest was staged by some sort of controlled opposition.
Click to expand...

Oliver Janich has been making fun of that position a fair bit recently. The last thing the oligarchs want is a 1.3 million people protest in Berlin. The media reported on it as 17,000 people. Hilarious. I personally know several people who attended these protests and they're saying it was bigger than the Love Parade. There's no way in hell it was less than 400k people and the 1.3 million figure was the original figure police reported before it got wiped off the net.

This is the best news of 2020, at least for Germany. Everyone who attended these protests is now going to tell at least 5 people each that the media is lying by a factor of almost 100. So next time there might well be 2 million people in the streets. In fact there's another protest being organized for late August, and this time, Berlin is inviting all of Europe to participate.

Guys, the oligarchs are making a huge mistake with this flu. Although the issue is as divisive as migration and Islam, it's not something you can consider "right-wing only".
Click to expand...

Yeah. At least half the protesters are decidedly not right wing. Just adds further to the cognitive dissonance they're creating with their fake narrative... "conspiracy theory nut jobs and far-right fringe"... normal people attend the protest and go "What?!". 1.3 million of them. Beautiful to watch.

Orthodox Inquirer
Gold Member
And I thought that Germans were cucked beyond repair. This woke a lot of people up. Logos is working for sure.
Last edited: August 19, 2020

Other Christian
Gold Member
This is some liberal interviewing Oliver Janich about Corona and then about a whole bunch of other conspiracy stuff too... awesome red pill, great to share.

That liberal Holger guy brings up many of the counter arguments we often face when we drop truth bombs, and Oliver has the perfect response to all of them... definitely worth listening to:

Catholic
Chancellor Angela Merkel and the Prime Ministers of the German Länder will meet on Wednesday. According to a newspaper report, Merkel insists on holding the Minister-Presidents' Conference on Wednesday as a "physical presence format".

This meeting must be very important if this conference cannot take place via video.
A prankster who thinks evil.

Catholic
In the Bavarian State Chancellery there is obviously a still undiscovered talent at work, as the screenshot above shows. Indeed, in the version of May 24 last year, the budget of Bavaria contains Art. 2 a "Credit authorization to finance Chapter 13 19 - Special Fund Corona Pandemic". From January 01, the text came into force, you can read in the header. Which clairvoyant is only responsible for this?

Is the number of corona deaths diced or estimated? The Spiegel reports completely different numbers in one article. What is actually true here?


Every day the media reports new horror numbers about Corona. But are the figures correct? Der Spiegel manages to report two different death figures in one article. In the BILD, on the other hand, there is also a different death number. Where do these figures come from? Do the SPIEGEL writers not notice the difference?

The SPIEGEL has often had different numbers in an article. The editorially processed figures often differ from the worldwide statistics shown in the same article, which often show lower death figures (see below).

Actually, one should assume that the number of deaths because of or with Corona is determined by a central authority, which is then taken over by the media. However, the reality seems to be different. 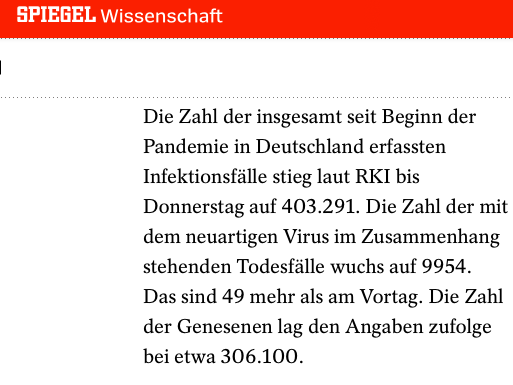 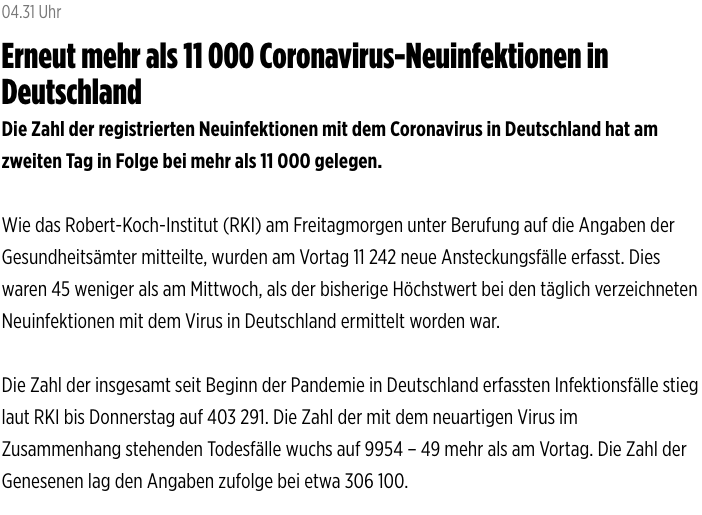 You can't let the Stasi police in Berlin put up with everything.
While people just stand around stupidly when the police assaults, this little brave girl acts. 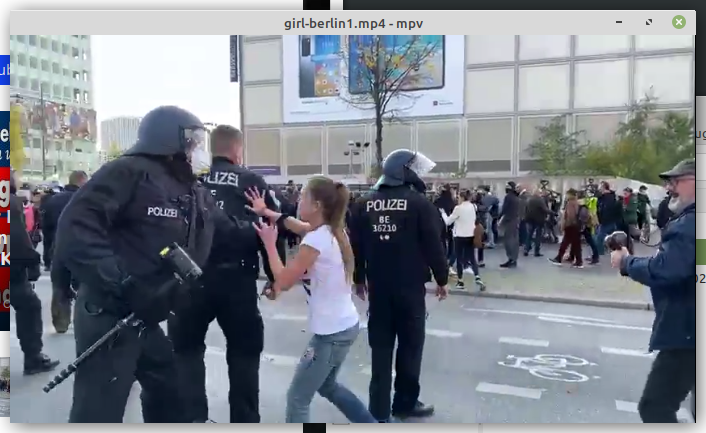 And then they actually arrested the child! How far is that supposed to go? 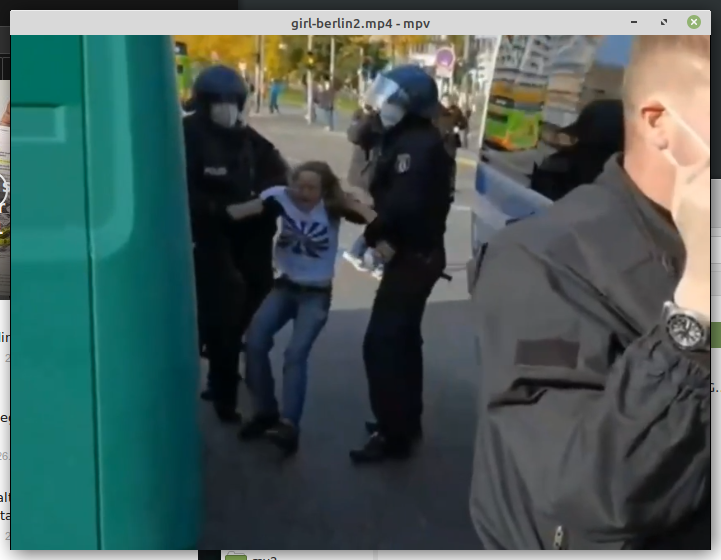 Leipzig - The police has prematurely terminated a "Querdenken" demonstration in Leipzig against the measures to contain the Corona pandemic. "Since the meeting leader on the Augustusplatz in Leipzig did not follow the requests for dissolution, the meeting is terminated now by the city Leipzig. Despite requests, the conditions were not met," the police announced on Saturday afternoon.

The officers had repeatedly reminded the demonstrators and the organizer beforehand, in vain, to keep distances and to wear the diapers. Before the breakup, the officers had also reported "verbal and physical confrontations between meeting participants.


Not really surprisingly, the "corona laws" unfold their full effect where they are most needed.

After the Querdenken organization and also the police withdrew, thousands of demonstrators are currently walking along the central ring road (which was banned) - just like in 1989. What the police want, no citizen is interested in.

No one wants to go home - although the police keep making announcements. The atmosphere is much more militant than on August 29th in Berlin - that's the spirit of 1989. And it's 15 degrees colder than in August. But in the hearts burns a fire that warms. These pictures will have a tremendous effect, giving new courage to the whole country. Thousands without masks, without distance and no police who dare to intervene. 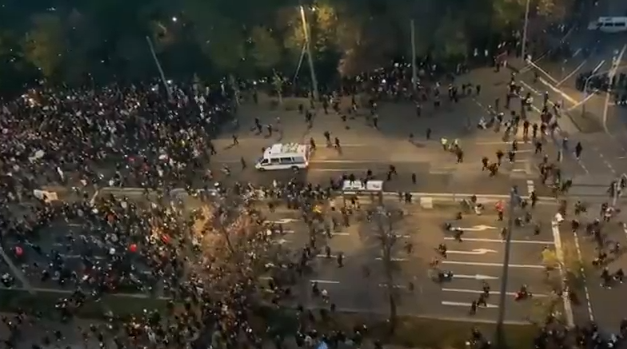 Orthodox Inquirer
Gold Member
I never expected the Germans to retain so much spirit after decades of Jewish degeneracy politics and constant brain washing since WW2. It's amazing and uplifting, the nation is still not dead. God speed German brothers and sisters, have courage and fight to the last drop of blood because you are fighting for your own cause this time.

Catholic
Another video showing the scene from Leipzig, Nov 7 from a drone's perspective.

The Medical Association of Berlin is now calling for the reporting of medical doctors with "different" views on the threat of corona. Once again, the professional debate plays no role. Those reported in this way are threatened with heavy fines.
Since March, 130 cases with "questionable or even false allegations on the subject of Corona" have attracted attention, as the state radio station reports. President Dr. Günther Jonitz described this to the news channel as "frightening as well as terrible and shameful in the same degree".

Among other things, he said, it was about practices with "mask forbidden" signs or statements like "vaccination without sense". A doctor would thus not only endanger the health of his patients, but also his own. "Freedom of opinion is one thing, spreading lies the other," Jonitz continued. The president of the Medical Association also advocated reporting such cases to the Berlin Medical Association. Jonitz continued:

"Then this doctor will receive mail from us with a request for a statement. This is a completely normal procedure under professional law. And in those cases where the doctor has in principle only expressed, let's say, his skepticism that he has a problem with it, he will receive a friendly instruction".

Otherwise, however, fines of up to 10,000 euros are also possible for purely "professional legal" reasons. So far one had already reported almost 20 medical doctors and medical practices to the public health department because of patient endangerment.

Other Christian
Gold Member
boo! no black pills
Germany has the biggest anti corona protests in the world I think.
I don't think this is going to be very good for Merkel's health in the long run.
L

Mountaineer said:
I never expected the Germans to retain so much spirit after decades of Jewish degeneracy politics and constant brain washing since WW2. It's amazing and uplifting, the nation is still not dead. God speed German brothers and sisters, have courage and fight to the last drop of blood because you are fighting for your own cause this time.
Click to expand...

35% of Germans experienced communism - Leipzig demonstration is no mistake. They recognize the boot of dictatorship when they see it.
Another point is that the Germans are logical and try to be science based. Yes - the diversity push is a form of self-hate post WWII, but the propaganda did not wipe out the scientific and logical German thinking. So you could be a leftie refugees welcome supporter while being a logical freedom loving scientist. The average high IQ also does not hurt in Germany.

Note for example the resistance in Southern Europe which is more motivated by the far worse economic situation and where mostly young men respond in a stronger fashion. The covid skepticism in Germany is probably some of the highest - but make no mistake - the dictatorship is showing it's teeth and they will crush it. Antifa funnily enough was for covid lockdowns.
Share:
Twitter Email Share Link
Top