acco said:
Funny is the activist life, here a new performance from Germany
Activists have created a "vaccination center" in Berlin. Enjoy!
(Translation below video)

Funny, this is kinda my approach, just take the piss...

Disinfect trainers (instead of hands) when I go in the gym...

Stand behind the last SD marker at the supermarket and toss items to the cashier (I then put the money at the end of the belt and keep a dead serious face until she starts it up)...

... pound my chest like rapper and tell anyone in a mask under 50 "stay safe" (super serious)

I'm planning to get a tape measure so I can check people are +2M and then poke them "yah! yah!" if they're too close.

One good thing about all this covid BS is that it's made the world a playground.
S

barrythecyborg said:
Funny, this is kinda my approach, just take the piss...

Disinfect trainers (instead of hands) when I go in the gym...

Stand behind the last SD marker at the supermarket and toss items to the cashier (I then put the money at the end of the belt and keep a dead serious face until she starts it up)...

... pound my chest like rapper and tell anyone in a mask under 50 "stay safe" (super serious)

I'm planning to get a tape measure so I can check people are +2M and then poke them "yah! yah!" if they're too close.

One good thing about all this covid BS is that it's made the world a playground.
Click to expand...

A few weeks ago I thought it would be funny to construct a 6' radius circle of wood/cardboard/whatever, and wear it like a giant tutu. Going down store aisles knocking thinkgs over, getting in everyone's way, generally being a giant ass and nuisance. But hey that's what everyone wants right?

The worst thing you can do is acting in an aggressive manner.

Try to do some funny stuff which will lead to more positive results.

One good thing about all this covid BS is that it's made the world a playground.
Click to expand...

"Noooo! I'm not scared... I think this is all bullshit... but it's the rules you know, we have to pay a fine if we don't tell you to put a mask". Every time so far. Only women seem scared of this thing here as far as I can tell.

acco said:
The worst thing you can do is acting in an aggressive manner.

Try to do some funny stuff which will lead to more positive results.
Click to expand...

I don't mean waving your hands around all angry, I mean as a natural consequence of having a 12 foot wide circle around your waist to ensure that people on all sides stay at least 6 feet away from you. I'd definately say that leans far more towards "funny" than "aggressive". That's the whole point. Most people don't adhere to the 6' rule. If you were to force it by physical means of a giant hoola hoop, you couldn't help but be in everyone's way. There by demonstrating undeniably how preposterous the whole thing is.

Abraham Lincoln once said that Presidents are made (or deposed) by circumstances: something beyond any government’s control.

There is a perfect storm of circumstances coming together in Germany between now and the first part of next year. Its elements are 1) under-the-table increased immigration; 2) over-tightening by an over-exposed stale government; and 3) reappearance of inflation, threatening the savings and quality of life of German families. (The Chancellor crossed a line for the first time, making implicit pledges for other's debts.)

This storm will break in an atmosphere in which Germans are already feeling increasingly weary, and even "naked" due to a variety of pressures in light of America's further withdrawal.

The Chancellor is a confirmed control freak. She has long used the label of the right-wing to manipulate public opinion. Demonstrations of ordinary citizens anywhere in Germany will become more harassed: salted with undercover security and police, some of whom are there to carry a “false flag”; impersonating extreme elements; creating sound bites for a compliant press that conform to the narrative that justifies the ever-tightening noose. The DDR left an impression on the Chancellor of how inculcating fear of one’s neighbor can be useful and effective in the short run. The pandemic is all about solidifying control.

Like shifting the garden gnomes around in the back yard, the Chancellor has kept the government in a very tight and obedient circle, over-exposing the same faces: speaking stale and trite words, and rhetorical tricks that are increasingly irrelevant. Very few will be listening by the end of this year.

For now, the key is perspective: This is not a frightening period. Nor is the change it engenders a bad thing. To the contrary, setting German families free to have an active voice in their future is a wonderful breath of fresh air.

It may be possible to control one of the three elements above, and possibly, with immense effort, even neutralize two of them. There is neither energy nor resources to successfully combat all three.

You can just begin to catch a whiff in the air. The storm that’s coming brings freedom.

acco said:
You can just begin to catch a whiff in the air. The storm that’s coming brings freedom.
Click to expand...

We should be discerning enough to spot if we are not being sold a Haegelian dialectic of the Antichrist here. If this 'freedom' doesn't come with Christ but other strings attached we should ask ourselves if this isn't a false salvation situation. If it's too good to be true do suspect a trick.

Catholic
This people had probably received unauthorized visitors.
Of course this is not possible and is a serious crime.
We must become millions on the streets and stop this madness. 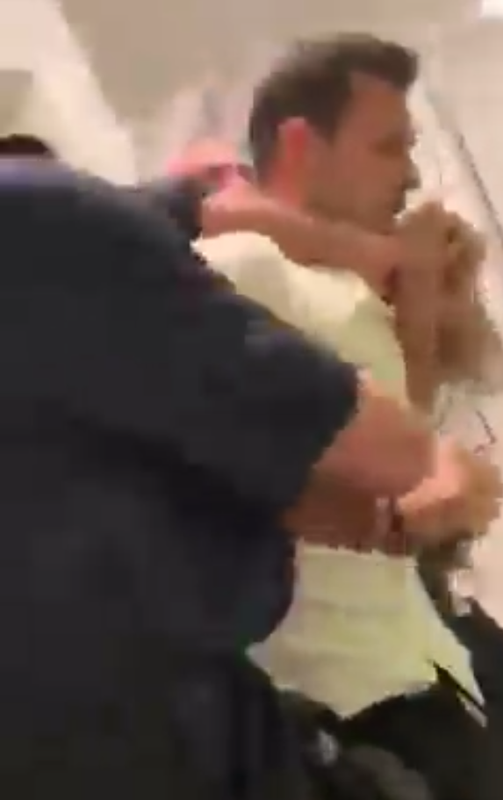 Catholic
Real satire: Eating an apple in public is now a danger to human well-being

Policeman asks an "apple perpetrator" to eat faster and not to stop.
Finally, the bored police have something useful to do. 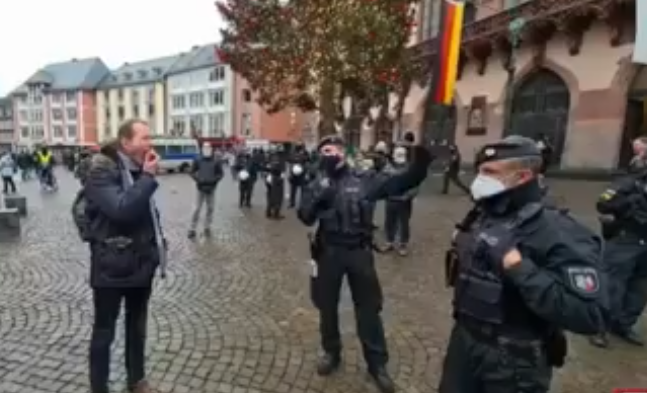 "I have visited many intensive care units. On the doors you can read the names of the patients and through the windows you can recognize the men and women on the ventilators. They all want to live. They want to experience how the grandchildren come to school and attend their children's wedding or just sit in the garden again next year and see the flowers bloom."

In fact, in German hospitals, especially not in intensive care units, there are patient names on the doors. For security and data protection reasons. What a liar!

We open up - No more lockdown 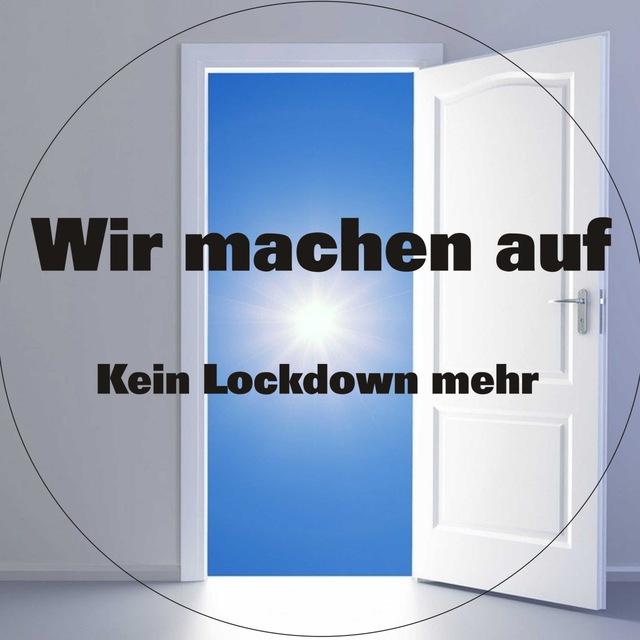 A new initiative for self-employed has been formed - as it can already be guessed that the measures will be extended on January 05, 2021 - so now some brave entrepreneurs have announced to open nevertheless.
Join these brave people, with your business, as a self-employed/solo-self-employed person.
The Telegram channel states:
"From January 11, I open the doors.
No further extension will be accepted."

All business operators are called upon to join and citizens urgently need to support local trade.

In Rosenheim, a sports retailer has already announced its five Intersport stores to reopen. He wants to open from January 11 and hopes for imitators from the industry.

Also in the Netherlands it is enough for hoteliers and restaurant operators.
Dutch entrepreneurs from around 60 cities and regions want to open their doors on January 17 - no matter what corona rules the government then prescribes.

Orthodox Inquirer
Gold Member
can you link that?

Udo Siebzehnrübl reports that the chairmen of the Intersport association had informed him that his plan to reopen his stores despite the lockdown had "attracted several people from the right-wing scene." For example, there had already been customers who had suspected that he belonged to the right-wing scene.

For him, it was thus immediately clear that he would have to "take a huge step backwards," because he wanted nothing to do with that scene. "It's a total shame, because we put so much energy into the project," Siebzehnrübl says. But it was never in his interest to riot, he says. Rather, he says, his goal was to set an example for retail.

Of course, endorsement from the right is not an option at all ...
I don't think that's the real reason for the backtrack.
A

Banned
Sure, why serve "right wing" clients when there is government money? This is exactly the reason why I have been buying my clothes and furniture used (no VAT for used objects) or from cheaper, high quality European producers. I don't care if all small shop owners go bankrupt, they chose their side.

Enhanced Eddie said:
can you link that?
Click to expand...

This presentation contains some interesting items regarding the history of pandemic planning. Basically, it lays out a theory regarding the globalist's long game and how Covid ties into it. It's an angle I haven't heard so far.

Well worth spending 1 hour watching it.

He also made a video in October

Catholic
A snippet from the news:

Söder [a Bavarian politican] fears that "a Corona mob or a kind of Corona RAF could form" in Germany. There is a danger, he says, that "small protest groups will develop out of larger movements and end up forming a radical nucleus that can become a terrorist cell.

LOL, what a crap