this was handled professionally by the regime
Click to expand...

Well the nomination of the judge to the Court of Appeals was done right out in the open.

Gold Member
Live coverage of the trial (link starts at page 12 which is currently the OLDEST page, but you can scroll to the bottom of the page and see links to go all the way forward or all the way back):

Protestant
Nothing will happen to her.
J

Banned
Atheist
I was reading WP article about Pfizer contracts, and this jumped out. A bit surprising, in good sense this time...
"...Yet these women have seized on similar strategies for their defense: Blame the men..."

"...False feminism always hurts the cause of gender equality. The suggestion that a woman guilty of wrongdoing can only ever have been under the control of a man deprives all women of agency. After all, to become less culpable, they must also become less capable. This is an appeal to prejudice masquerading as progressivism.
The least sexist thing we can do is embrace the uninspiring reality: Women can be evil, too..."

Catholic
I was thinking about this case today. I see this as propaganda. Propaganda to divert our attention.

It's being reduced to Maxwell fixing girls for older guys on an airplane with marketing lines as "the lolita express". They fully spin it to a sex angle.

But as with any spin.. What do they want you to forget?

They want you to forget about a network of very powerful people. Her Jew father being a prominent Mossad agent, a media mogul, one of the richest men in the world and connected to the full Israeli top. I think we see here a piece in the puzzle of our Jew and billionaire lead society, maybe some blackmail & sexual, but at the core i think it's a Jew lead network with the most powerful connections on earth with her and Epstein having a crucial position. I watched some videos of the island, it's mostly extreme luxury, seems most like a Jewish elite giving their guests a great time. In a way it shows the new world order. A global network with Jews at the core of it.

I think this lawsuit is a show for the people. How realistic is it that the daughter of one of the most powerful in the world is just pimping girls?

I think that's what they want us to believe.

Propaganda to divert the attention. Jews are masters at this.

Jane, one of the testifying girls is of course a pain in the ass for the Jews, she had received $5m (£3.75m) from the "victims' compensation fund" (How Jewish, portraying bribery as a compensation fund) and still went to court. Most girls would have just accepted the money and went on with life.

My guess how this plays out:
- Judge will say: Maxwell should have never done this.
- Maxwell will testify she didn't know the girls were under 18.
- Maxwell will get a low sentence for sexual crime. Which is a great damage control for the Jews.

Left wing media will build up sympathy for her. CNN is already canonizing her as a hero. Who is Ghislaine? (Look at the beautiful smiling photos they use of her, can you imagine this for Derek Chauvin?)

Who is Ghislaine Maxwell? Socialite and ex-girlfriend of Jeffrey Epstein guilty of sex trafficking a minor

British socialite Ghislaine Maxwell, who gained global notoriety as the former girlfriend and social companion of convicted pedophile Jeffrey Epstein, was found guilty by a New York jury Wednesday on five counts relating to her role in his sexual abuse of minor girls.

And we will never see any investigation in this network and what they discussed and did together. Hey.. Who would dare to investigate the ruler?

I'm happy we have God on our side, let these devils sacrifice at their altars of baal, it's just a shame these freaks run our society.
Last edited: December 2, 2021
R

Other Christian
Exactly! What’s the real significance of the Epstein scandal? Not female trafficking or underage prostitution per se, but the fact that Mossad appears to have engineered a decades old trap to ensnare politicians and tycoons and whatever other movers and shakers and then blackmail them with the spy footage of them getting it on with underage girls (and who knows what kinky, perverted stuff they got on camera). That way they can ensure their unswerving loyalty and slavish servility towards “America’s greatest ally.”

The real scandal is what it tells us about how Mossad - and Israel in general - function to get what they want out of powerful people.

Redcrosse said:
Exactly! What’s the real significance of the Epstein scandal? Not female trafficking or underage prostitution per se, but the fact that Mossad appears to have engineered a decades old trap to ensnare politicians and tycoons and whatever other movers and shakers and then blackmail them with the spy footage of them getting it on with underage girls (and who knows what kinky, perverted stuff they got on camera). That way they can ensure their unswerving loyalty and slavish servility towards “America’s greatest ally.”

The real scandal is what it tells us about how Mossad - and Israel in general - function to get what they want out of powerful people.
Click to expand...

Exactly and even if we strip away the alleged sexual perversion and blackmail. We see a clear picture.

Of a global elite, flying in secret to an extremely luxurious private island all paid for and run by Epstein and Maxwell unknown by the general public. Who else in the world can have a secret island and can receive royalty and people like Gates, Clinton, Kennedy and Trump?

I remember seeing this Epstein case pop up years ago and thinking how will they save their asses out of this one.. They have some skilled propagandists in their ranks for sure.

Meanwhile Israel has 14 of 19 UN resolutions against them.

• Resolutions on Israel: 14 • Resolutions on Rest of the World: 5 In the current 76th session of the UN General Assembly (2021-2022), EU member states are likely to vote for one resolution each on the human rights situations in Iran, Syria, North Korea, Myanmar, and Crimea. See second table at...
unwatch.org

What is funny is that UN watch is a Jewish NGO complaining on the amount of UN cases against Israel.
They don't even understand the absurdity of it. A complete lack of self-reflection. They are so powerful they don't understand how the UN dares to outline their crimes to humanity in Israel.

Who call the shots?

This is all power politics, and Jews are at the top of the chain and can do whatever they want.
Last edited: December 2, 2021

The truly frightening thing would be if that were actually true.
Click to expand...

One of the best comments on the thread. 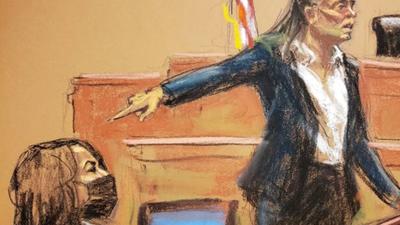 Today, after six days of deliberations over accusations that Maxwell helped pedophile Jeffrey Epstein mount a “pyramid scheme of abuse” involving underage girls, the jury came to their decision ahead of what was to be a working weekend through the new years' break.

The jury found her guilty on 5 of the 6 counts of luring and grooming underage girls for sexual abuse by Jeffrey Epstein, a verdict that offers some long-delayed justice for his victims.

She was acquitted of one count of enticing a minor to travel across state lines to engage in an illegal sexual act.

The verdict was largely a rejection of Ms. Maxwell’s defense, which centered on an argument that government’s case was based on flimsy evidence, prosecutors’ animus toward Mr. Epstein, and the inconsistent accounts of women who were motivated by money to point the finger at Ms. Maxwell.

AP reports that she stood with her hands folded as the jury filed out, and glanced at her siblings as she herself was led from the courtroom, but was otherwise stoic.

Maxwell faces up to 70 years behind bars, and still awaits trial on two counts of perjury.

Lawsuits involving the abuse allegations also continue, including one in which a woman not involved in the trial, Virginia Giuffre, says she was coerced into sexual encounters with Prince Andrew when she was 17. Andrew has denied her account and that lawsuit is not expected to come to trial for many months. 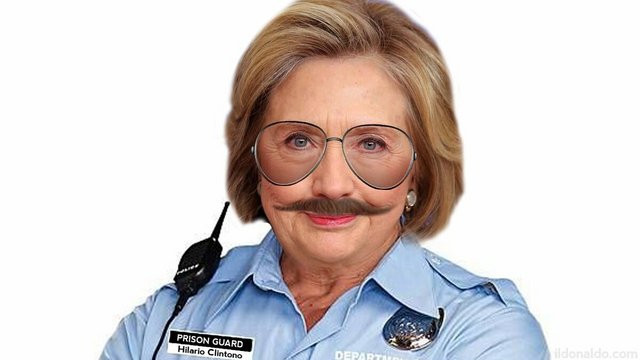 The crazy thing is after seeing the picture of Maxwell with the Pope as well ....a certain old school conspiracy theorist David Icke talked about this sort of thing decades ago.

Other Christian
Gold Member
Let us hope this trend continues. 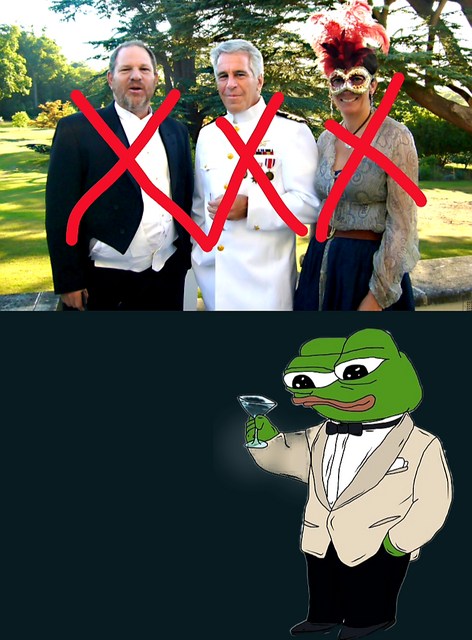 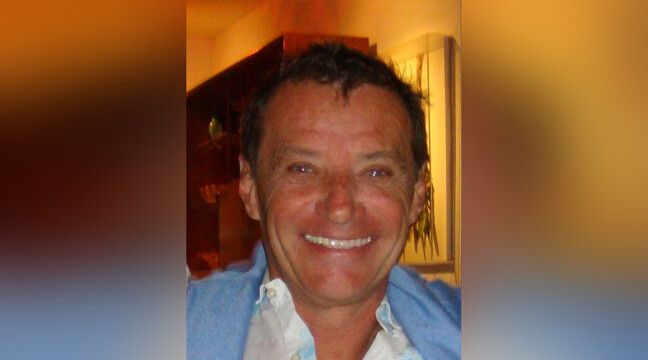 Jean-Luc Brunel in the early 2000s (Myspace profile). – MYSPACE He spent part of the week in police custody. Model agent Jean-Luc Brunel was finally brought before an investigating judge on F…

Jean-Luc Brunel did not kill himself. 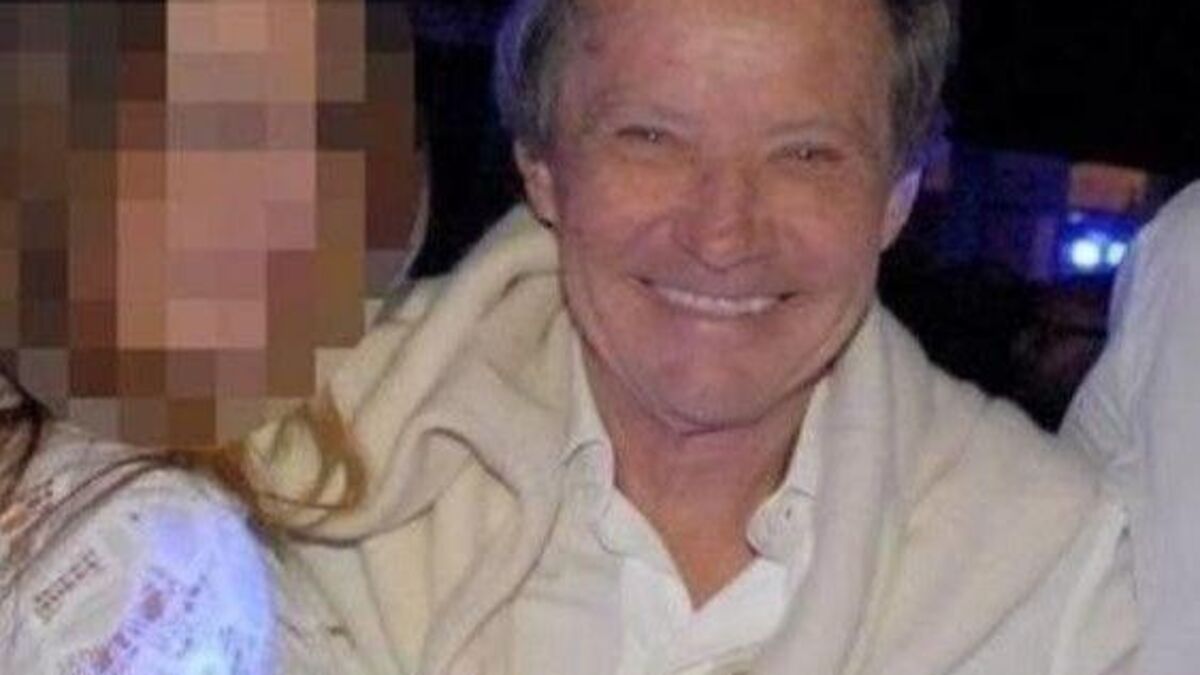 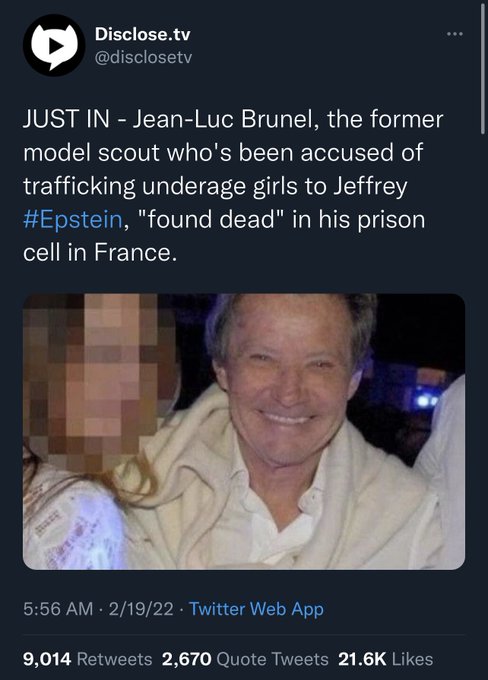 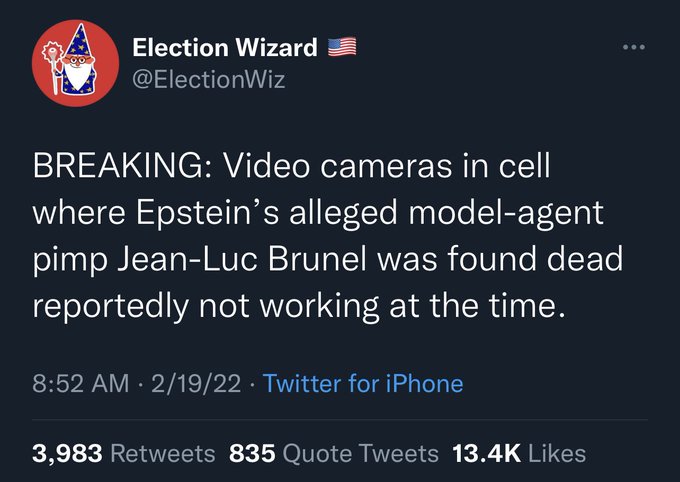 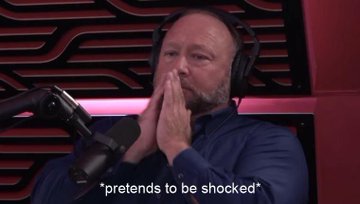 But I keep having faith in our democracy! Our courageous leaders! The billionaires fighting climate change! We owe to the Holocaust survivors and the millions that were murdered! The liberals keeping us free! No children, no meat, no car for the coming generations! We are here to fight the Nazis! For LGBTQI! Against evil Russia and China! To the moon! Reparations for the victims of slavery! Compassion for victims of spontaneous suicide! This is who we are!

Gold Member
Id say theres an opportunity for someone to sell dependable prison camera systems but I have sneaking suspicion hats its more of a demand side issue rather than supply side.
Share:
Twitter Email Share Link
Top