Got your tribute to international women's day right here:

Why ARE so many more women sucking their thumbs and how can they break the habit?


A recent survey says 12 per cent of adults continue this childhood habit
Its persistence is partly due to the fact that sucking is the first reflex we learn
Sandra Trebinski of the Hypnotherapy Centre, in Windsor, Berkshire, sees at least 200 or 300 adult thumb-suckers a month
Usually one session is enough to break the habit that has lasted since childhood.

Every night, Karen Sparrow rests her head on her pillow, pulls the covers around her and sucks her thumb.

But Karen is not a toddler trying to soothe herself to sleep. She is a grown woman of 38, with a job as a data analyst and a family — and this bad habit, left over from childhood, causes serious disruption to her life.

While concentrating at her desk, Karen’s thumb creeps into her mouth. Driving in her car, she unthinkingly takes one hand off the wheel to suck her thumb. Once, she even started doing it in a job interview.

According to a recent survey, 12 per cent of adults continue sucking the childhood habit of sucking their thumb

According to a recent survey, 12 per cent of adults continue sucking the childhood habit of sucking their thumb

‘I was in front of a panel when everyone started staring at me and I thought: “Did I answer a question wrong?” Then I realised: I was sucking my thumb,’ says Karen, from North London.

‘I apologised and they all started laughing, saying that they’d never seen anything like it before. I was so embarrassed, but I did get the job — I think it made a good talking point!

The habit is so ingrained that, when Karen dislocated her shoulder seven years ago and had to wear a sling — preventing her from sucking her left thumb as usual — she ended up sucking the right thumb instead.

‘I couldn’t not suck my thumb,’ she says. ‘I find it so comforting and relaxing. I do it while I’m watching TV and in bed where it helps me to go to sleep. The only time I feel self-conscious is at work, because I know it looks so childish.’ Clinical psychologist Helen Nightingale says adult thumb-sucking happens automatically and can have a familial cause. ‘It’s often passed down in families,’ she says. ‘It’s highly self- soothing and, as such, it is very resistant to change.’


Her mother used to paint Karen’s nails with varnish so the bitter taste would put her off. ‘But it never worked,’ she says. ‘And now, I don’t want to stop.’

The only time Karen thinks twice about her habit is when she’s with her 11-year-old daughter, Ashley, who cries out with embarrassment when she sees her mother inadvertently sucking her thumb in public.

‘If it happens when we’re out shopping, she’ll give my hand a light slap and tell me to stop,’ says Karen. ‘I know she finds it ridiculous because I’m a grown woman, and I suppose it is.’

Ridiculous it may be, but according to a recent survey, 12 per cent of adults continue this childhood habit.

No one knows exactly why the thumb is sucked, but it is likely to do with ease of access as a foetus and baby

No one knows exactly why the thumb is sucked, but it is likely to do with ease of access as a foetus and baby

Its persistence is partly due to the fact that sucking is the first reflex we learn; it is a survival instinct developed in the womb that becomes the sucking reflex responsible for breastfeeding.

No one knows exactly why the thumb is sucked, but it is likely to do with ease of access as a foetus and baby.

Sandra Trebinski of the Hypnotherapy Centre, in Windsor, Berkshire, sees at least 200 or 300 adult thumb-suckers a month — and believes the habit can be down to attention-seeking as well as its ability to provide emotional comfort in times of stress.

‘While most children drop the habit naturally, those who continue will often receive parental criticism which, while negative, is still attention and works to get them noticed,’ says Sandra.

According to a recent survey, 12 per cent of adults continue this childhood habit
‘The longer that the habit continues, the more it becomes ingrained in the subconscious and becomes an anchor activity that induces a relaxed state of mind.’

However, those who come into Sandra’s clinic are often desperate to break the habit.

‘Many say how essential the thumb-sucking has been as a stress reliever, whether at work or through exams, but they have finally reached a tipping point and want to stop,’ says Sandra.

‘Often it’s to do with their teeth — the sucking can damage the shape of the jaw and position of the teeth, causing them to protrude.’

And if clients are about to get braces to rectify the damage, they don’t want to undo all the work by thumb-sucking.

‘Or perhaps they’ve changed job or got a new partner. There’s a fair bit of secrecy and shame and fear of being found out, which can be reason enough to stop.’

Sandra’s sessions, which are 90 minutes and cost £95, involve putting her clients into a hypnotic trance then suggesting they leave the habit behind.

‘Thumb-suckers by nature tend to go into a trance-like state when they’re sucking so they are often more open to hypnotherapy,’ she explains.

Usually one session is enough to break the habit that has lasted since childhood.

Natalie Rogers, 33, who is training in child and adolescent mental health and wellbeing, has no intention of seeking treatment for her thumb-sucking, even if it means having to hide it from potential boyfriends.

Natalie, who lives in Southgate, North London, says: ‘I remember at 16 sitting in my then boyfriend’s house and his mum scolding me, telling me that it wasn’t appropriate for a girl of my age.

‘As I’ve got older, I do it mostly at night when I have trouble falling asleep.

‘When I start dating someone, I have to do it secretly, though sometimes I’ve done it without thinking and have had to quickly take it out.’

Anna Reay, 35, has also found her childish habit disruptive to her love life.

The singing coach from Newcastle upon Tyne confesses that after a less than successful night out with a boyfriend, she went home early just so she could suck her thumb in bed.

‘It has been such an important part of my life for so long and I’ll do it everywhere,’ she says.

Usually one session is enough to break the habit that has lasted since childhood
Her fiance Stuart, 38, who runs a joinery business, rolls his eyes and tells her to stop, but she says the only reason she would quit is to protect her teeth.

‘I had braces for years when I was younger and I now wear a retainer behind my front and lower teeth, but I think they’ve definitely moved forwards,’ says Anna.

The clinic, in South-West London, targets children between eight and 18 as well as adults.

‘Persistent thumb-sucking can reshape the mouth,’ he says. ‘Before the age of six, it’s fine as your adult teeth haven’t come in, but once they do the problems can start.’

Like any habit, Dr Counihan says it takes a conscious effort to break it.

‘You can try physical barriers such as thumb guards, but ultimately you have to want to stop,’ he says.

Karen, luckily, hasn’t had any problems with her teeth, though her favourite thumb for sucking, she observes, is inexplicably slightly shorter than the other one!

‘As habits go, it’s harmless and not a bad one, is it?’ says Karen, as she — you guessed it — starts to suck her thumb.
Click to expand...

Sandstorm said:
Do your duty - down-vote this into oblivion......

I treated the lady to a nice drive out in the countryside. 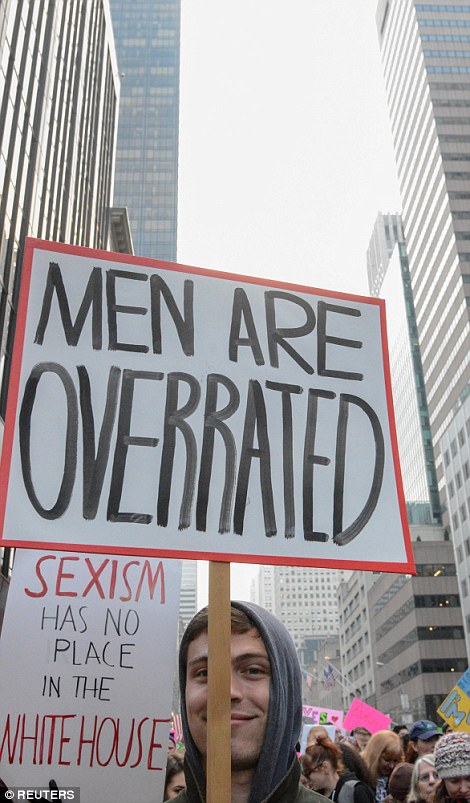 No - men are underrated now. Bitches think that most CEOs and top-level scientists being men is due to sexism. 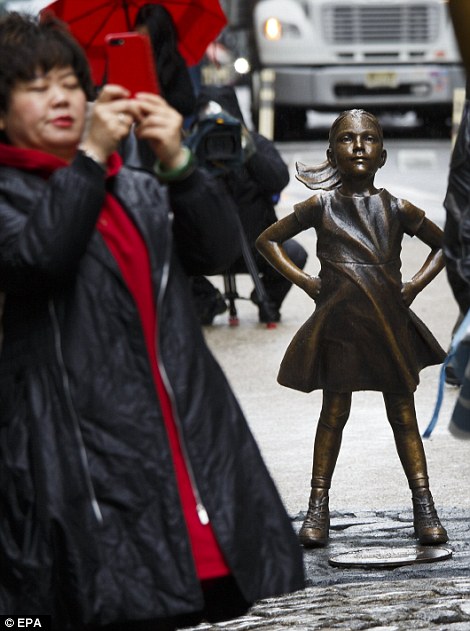 Look at the bitchy pose and idiotic face.

I know what we should do - one day without cops. The rapes and riots then will teach those bitches some humility.
A


Some of the comments:

Shoutout to all attack helicopters everywhere.﻿
Click to expand...

How can we have a Womans Day if gender is a social construct?﻿
Click to expand...

still wondering why you lost? LMAO﻿
Click to expand...

The day without a woman was hugely successful... I didn't hear any bitching, moaning, nagging all day!﻿
Click to expand...

Orthodox
Gold Member
My girlfriend told me there is also a Men's Day celebrated here in Serbia. The tradition is you chase your father around the house and if you can catch him and tie his legs with a rope then he has to give you money.

She says her dad never "went easy" so they never got money.

That chick looks like a tranny. So does the girl depicted in the statue.
G

Gold Member
My buddy and I went to a local stripclub last night and wished all the ladies a happy international women's day.

Gmac said:
My buddy and I went to a local stripclub last night and wished all the ladies a happy international women's day.
Click to expand...

Heh.
Can't find a sugar daddy if they stay at home...
S

Gold Member
Saw this on Facebook earlier today. The response video is the only version I could find on Youtube. All those nancy faggots from Sydney High are in need of a good beating.

Linda Sarsour - the sharia promoting Trojan horse got arrested not for protesting, but for doing additional shit:


By the way - her sponsor AJ+ is financed by one of those oppressive gulf states that would have encarcerated her if she ever got raped. That is by the way why the rape stats in the Muslim world are so low - if you get punished severely even for being raped, then you are not going to notify jack shit.

Look how smug that woman is:

I see the iron my shirt guy...

But is this a protest against inequalities in golf? They got the ladies tees for christ sakes.

Can someone explain please.

It's wierd cause if you saw them on the street they look "manly" but they have no problem supporting leftist causes
Click to expand...

That's Canada for you...damn Turdeau made being a feminist cuck a national sport.

Well - since it was a big Wallstreet company who did it, then who knows.

But had to laugh at this - good one Delicious Tacos.

Dan Bilzerian had a good one:

Self-described trust fund playboy and jerkoff Dan Bilzerian successfully trolled an entire gender with the ease of one super obvious Instagram photo. Bilzerian has millions of Instagram followers which mathematically equates to millions of simpletons, reactionaries, Social Justice Warriors, and women who watch Oprah and feel inspired to do something amazing, though it's been twenty years now of watching

“It’s #internationalwomensday be thankful, they are good for so many things!” her.