Good riddance.
Heartiste devolved into a ranting KKK site. I stopped reading long ago.
He lost the script years ago, and ruined a good thing with his Nazi bullshit

dukecro said:
Didn't dig through all of it but this seems a good archive

Bucephalus said:
An archive of CH up until May 2019:

Heartiste suspects it was his recent support of Roosh that made them finish him off: 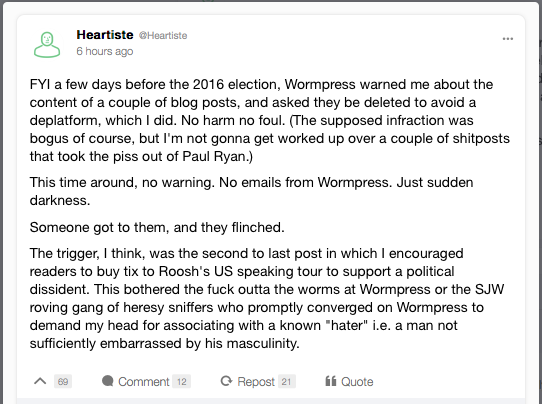 Orthodox
I hope he gets it running again, or at least compiles his work into a book. One of very few sites worth reading daily.
E

Gold Member
It sure sounds like he is done. He was really good about 9+ years ago, now he was just sort of there

Milo just said that Heartiste was the only blog that he followed religiously and wants a greatest hits book that he can send to young men.

Wouldn't have expected that from a former editor at Breitbart - CH touched on the JQ. I'm curious how many influential people secretly read Heartiste.
X

I've registered a domain with a relatively free speech friendly web host. If Heartiste doesn't get his act together within a few weeks it will serve as an archive of his work. He mentioned on Gab that he didn't have any backups. Despite that we'll be able to recreate every post starting with Endless Dating (2007). Yes, there are a couple aggregate websites which have archived his work alongside other prominent Manosphere authors such as Roosh but this site would be an exact duplicate down to the Misty Look theme he used with a small disclaimer that its purpose is to archive and spread his work.

If anyone has a solution for reuploading his original comment sections, I'd like to hear them. What would CH be without GBFM lolololzlzlzlzlz

Gold Member
You don't think that's something he should OK himself?

What if he wants that hole in the net to remain as a reminder of what's going down?

It's not as if he's been hit by a bus. Does his opinion matter here?
X

Leonard D Neubache said:
You don't think that's something he should OK himself?

What if he wants that hole in the net to remain as a reminder of what's going down?

It's not as if he's been hit by a bus. Does his opinion matter here?
Click to expand...

Leonard, he does have an account here and can speak for himself. The website would serve as an archive only with a disclaimer. In my view it is exactly the same as those websites that reblog Roosh or RationalMale. As long as due credit is given, it's acceptable. If the original author asks for a take down, then it gets removed.

As far as leaving a hole in the Manosphere...I don't see what the use would be long-term if one of his phrases was "Game can save the West." Heartiste-style Game cannot save nor help the West if only a handful of OGs know about it. How many people think about the Book of Pook when they think about the Manosphere? Even though his posts were great and later assembled into a PDF, it is still a somewhat esoteric piece of literature for game newbies.

IMO, one of the reasons Heartiste's blog didn't have an even greater impact is precisely because it was run as a Wordpress.com subdomain. I've run a few Wordpress website both for free through Wordpress.com and as Wordpress stand alones on independent domains. Google takes a .com must more seriously than .wordpress.com or .blogspot.com Yes, eventually he broke through the sound barrier via continuous long-form posts and attracting a following which apparently included Milo and possible one of Trump's sons. Not that many people found Heartiste through Google even though his posts were often about things people search for. All of that is now gone. If we want the kids now in high school to get a taste of the red pill then the articles need to be in the Google Index collecting hits and clicks instead of being passed around as a PDF in RVF DMs.

I'm hoping that the man himself will get this all squared away but reading his Gab its becoming more apparent that IT is not his strength like it is with Roosh.

Gold Member
It's a good initiative, but a quibble on Google, I wouldn't count on the new domain getting a lot of play via Google, they will quarantine it in their search algorithms.

amicableCzar said:
Good riddance.
Heartiste devolved into a ranting KKK site. I stopped reading long ago.
He lost the script years ago, and ruined a good thing with his Nazi bullshit
Click to expand...

This is exactly my feeling.

911 said:
It's a good initiative, but a quibble on Google, I wouldn't count on the new domain getting a lot of play via Google, they will quarantine it in their search algorithms.
Click to expand...

I can't really write what I think without some complaining I'm attacking them and getting me banned (I'm already at 60% for some bullshit sand-in-pussy complaint on HERE of all places).

CH was one of the greatest writers online and had my most enthusiastic readership. He was also right on pretty much everything up to the end and most would agree if they knew anything at all.

Heartiste seems to have been a semi-casual shitposter after all. He barely had some decent backups and lost 500 prepared and not published posts.

Said that he likely will put it up somewhere else.

I could imagine that they went after him after he promoted Roosh which is frankly a bit daft, but I guess the elite qualify as a real-life-meeting of masculine men as far more dangerous than anonymous shitposting even if that shitposting is more radical. It's a bit paranoid, because things would really have to get much worse before that group of men jump into real action, but I guess that they are not taking any chances.

This is also interesting - Paul Watson mentions that the first thing he does is check whether he is deplatformed. I guess it's all a matter of time.

Gold Member
I find it hard to believe that Heartiste has no backups of his own. Hell, some RSS readers will let you see old archives, and web.archive.org probably has all the good stuff. I personally don't care about the comments section as that's digging through turds to find the gems.

Possibly plausible deniability for cleaning up the articles that do get reposted.