Alpha is the new Alpha said:

MichaelWitcoff said:
Nobody will know until it’s legal to do research at the sites, which is exactly why it isn’t.
Click to expand...

The biggest issue is i have with the holohoax is, If the truth is so self evident, then there should be no issue to question it, or have research done for the sake of validating it...but no...not being able to have that is the biggest red flag to me.
Click to expand...

You can deny the Holocaust all you want in the US, UK, Switzerland and others. Because of free speech.

Not so in large portions of western europe (germany, austria, france, ect). For one, "hate speech" is criminalized, which basically includes holocaust denial under that umbrella. Heck, you can go to prison for being anti-Islam.

Another element is the hatred many of these countries have of the Nazi-era Germans. To deny the holocaust is to deny a good portion of what the nazis did, and their atrocities. Thus it is of no big surprise that you can not bring up forced relocation, "ethnic cleansing", of ethnic Germans after the war in Poland/Baltics and Czechoslovakia, Dresden Bombings, Allied War crimes.

If you have been to poland you will see how much the Poles hate the Nazis, and the soviets for that matter. Not surprisingly, calling concentration camps, "polish concentration camps" is grounds for prosecution. Poland, having being occupied, wishes to keep the narrative that none of its citizens collaborated. Which of course is untrue.

Denazification was a priority of the American-British hegemonic leaders at the time in post-war continental europe. Part of the process was to ban Nazis from being in power (didn't work well), another part was solidify the narrative about Allied involvement in the war. So, it was after the war, that these laws were put on the books, at the behest of the allies (so much for free speech!).
Click to expand...

In comparison to the ~60m holodomor which was created by Jewish Bolsheviks ? Yeah, I'm not feelin that


I'm more under the impression that Those "death camps" were german work camps for native germans that were trying to recover from the economic collapse that had their supply and cargo lines utterly decimated by allied bombing hence the starvation,typhus and other diseases that modern medicine hadn't had time to catch up to yet.


Have you seen the hatred ginned up for Donald J. Trump ? the guy is nothing like what the media has against him....The media is also financed and owned by the majority jewish billionaires too. If anything even the SEMBLANCE of america becoming a sovereign nation infuriates these sheisters. I still don't believe it.
W

SS concentration camp guard, 94, who lived in Tennessee for 60 years had his secret past uncovered by researchers who found a record of his Nazi service on a sunken ship in the Baltic Sea

--Friedrich Karl Berger was said to have been 'willing' to work at a camp in Meppen
--He was ordered by judge Rebecca L. Holt on Thursday to return to Germany, where he continues to receive a pension 'for wartime service' atrocious conditions of confinement'
--He is said to have admitted guarding prisoners to prevent them from escaping
--Berger even helped guard the prisoners during their forcible evacuation to the Neuengamme main camp; a move in March 1945 that claimed the lives of 70
--The now 94-year-old came to the US in 1959 with his wife and daughter
--'After 75 years, this is ridiculous. You’re forcing me out of my home', he said

Bumping this thread because the holocaust should be renamed to holohoax.
D

I read a memoir of a man, who saw Dresden bombing 20 km away from train. Afterwards he was sent to the city to cremate the bodys. Then the second attack occured which he managed to survive. Worked 4 days. He saw how a plane was shooting the lucky survivors after the bombing (similar information about the shooting was also in Kurt Vonnegut's book).
As he visited Dresden in January 1945 while searching for his parents, because at that time there were a lot of refugees. He saw that how they lived in corridors, staircases, different public areas, train station. Refugees were mostly women, children and old people.
After the bombing when they piled the dead bodies, he remembers a big old lady with white stockings they lifted on top of the pile. Years later he saw a photo of it but this time it was refered as "victims of nazi crimes." 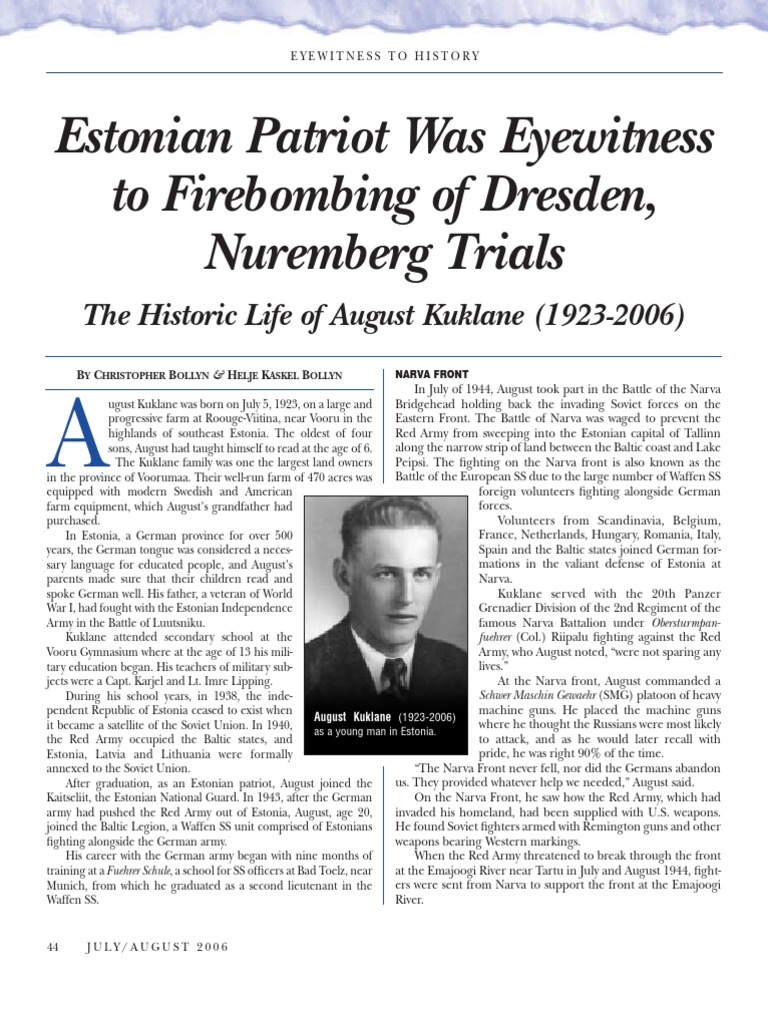 Kuklane, an Estonian patriot who witnessed the horrors of the Dresden Bombing Campaign. Its by Chris Bollyn and his wife Helje Kaskel Bollyn. Visit http://www.iamthewitness.com/Bollyn.html for more of his articles Of Nazis in Comic Books and Everyday Life


“ Paradoxically, the evils of Nazism serve as a pretext for artists to express their own sadistic tendencies. Cruel and sadistic revenge fantasies are a common theme, perhaps most famously portrayed in Quentin Tarantino’s popular 2009 film Inglourious Basterds.”
J

Mr Gibbs said:
Interesting article on the differences between the historical accuracy of the National Socialist party in Germany vs the view in pop culture
Click to expand...

You may also find this interesting.

That was such a cuck movie.
W

She worked as a stenographer and secretary to the camp commander," between June 1943 and April 1945, the prosecutors said in a statement.
She will face a juvenile court because she was under 18 when she served in Stutthof. 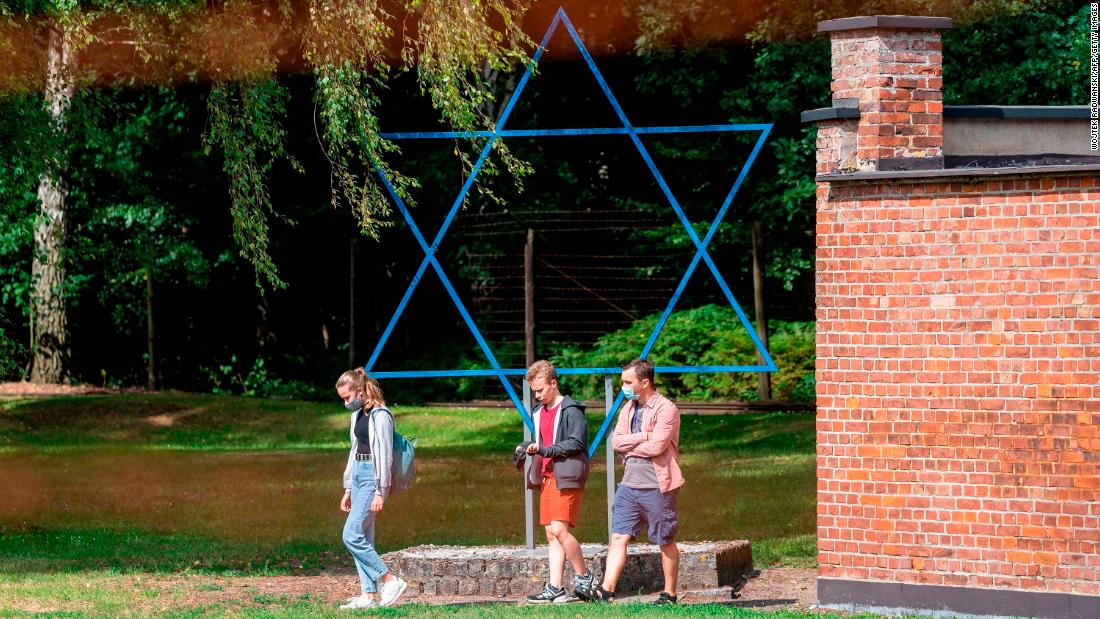 A former secretary from the Stutthof Nazi concentration camp has been charged with complicity in the murders of 10,000 people, German prosecutors said Friday, in what is a rare case involving an alleged female concentration camp staff member.

I think the whole idea of prosecuting such low level officials after so much time is to scare people into not supporting any type of right wing movement. The message is that if you lose we will come after you no matter how much time has passed or how minor a role you had in the movement.
P

Oberrheiner said:
That was such a cuck movie.
Click to expand...

Does Tarantino make any other kind? Between Pulp Fiction, Inglorious Basterds, Django and The Hateful 8, he seems to have a fixation on anti-white violence and man on man rape. Throw in his association with Weinstein and you've got a real scumbag.

I'm too old to know.
He was really hyped in the 90s and I honestly never understood why.
Never cared much either ..

An ex brought me to see that bastards movie, and even she found it lame and cucked.
E

She worked as a stenographer and secretary to the camp commander," between June 1943 and April 1945, the prosecutors said in a statement.
She will face a juvenile court because she was under 18 when she served in Stutthof.

A former secretary from the Stutthof Nazi concentration camp has been charged with complicity in the murders of 10,000 people, German prosecutors said Friday, in what is a rare case involving an alleged female concentration camp staff member.

I think the whole idea of prosecuting such low level officials after so much time is to scare people into not supporting any type of right wing movement. The message is that if you lose we will come after you no matter how much time has passed or how minor a role you had in the movement.
Click to expand...

All its for is to constantly bring back muh 6 gazzillion into the news and public consciousness.

These people are being used as sacrificial goats to keep the mythos burning in the public mind.

It's a cult, and they need their offering.

wannable alpha said:
How can such low-level soldiers be held responsible for the actions of higher ups? What choice did they really have?
Click to expand...

Close to none. My questions are: how many high ups are still alive to answer for their actions and if they are, does it really matter? They are very old.
A

LOL what did I just watch
E

Not sure that'll help with the normies....

Also, the Germans caused a famine during their occupation, killing 700.000 Greeks by starvation in order to acquire lebensraum at the expense of "subhuman Slavs".
But I was told that is just an ethnic grudge that blinds me from recognizing how great the Nazis really were.

Caduceus said:
Video showing 10 different original newspapers from the year 1915 to 1938 which mention the number 6 million jews in their articles.
This is years or even decades before the holocaust even started, and even before the Nazis came to power in 1933.

Clearly the video has been removed. I haven't seen this video, however this has piqued my interest. Why has it been removed?

If it's factually incorrect, and the newspaper cuttings have been proven to have been fabricated, then fair enough. If it's promoting violence or genocide, then fair enough. However if it's been sent down the memory hole for asking inconvenient questions, then that isn't reasonable and one has to wonder why that would happen. The truth does not fear investigation.

I once saw a video on YouTube which included a clip from the Ascent of Man, a BBC series, in which the presenter, who was at Auschwitz, said (paraphrasing) "...into this little pond were flushed the ashes of four million people...", it then juxtaposed this with the revised figure of 1.5 million people. That video disappeared, and that's when I first began to ask questions.

I read recently in The Guardian that criminalising 'holocaust denial' is being considered in the UK. Frightening. The elite are not even bothering to pretend that we have free speech nowadays.

Gold Member
Those laws are set up so that the accuracy or truth provided in the content does not matter, if it is intended to go against the main narrative, truth is no a valid defense. They are more akin to religious blasphemy than anything else. 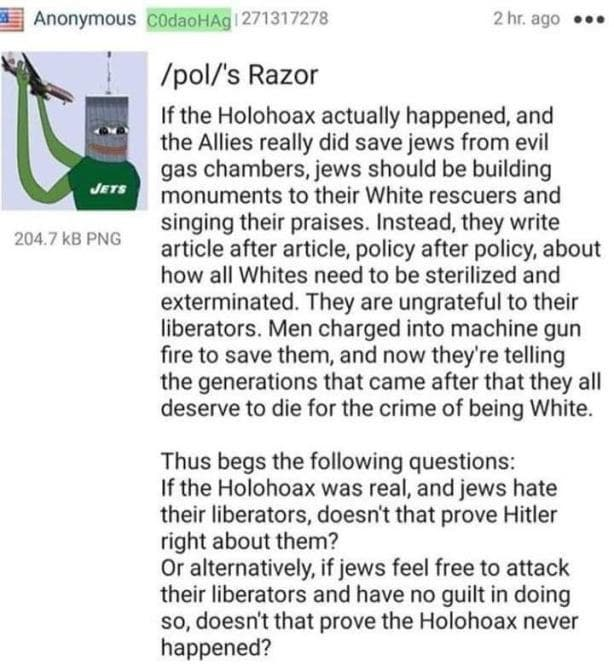