I hope POTUS Trump sees this as a great opportunity to dimolish 20th century libiralism from Jimmy carter to obama sucking up to the imams and push Iran towards a modern, pro-west, open and capitalist society like we should've had.

Gold Member
What is the colour of this "revolution"?
M

Is this organically driven.Or is it orchestrated by NGO's and foreign backers?

Gold Member
I know a lot of Persians.

All the same, I had scotch with a Persian friend tonight. He hopes they give these fuckers hell before real war starts with the Sauds/Pakistan/Iraq.

Gold Member
I have also met a lot of Persians (mostly living in the US). Good folks, I have enjoyed their company. I also have some in my extended family (step mom's brother married one).


I really hope that all those protests are genuine. From what I have seen, they might be - Iran's economy is rather poor, and Iran's current involvement in Lebanon, Syria, Yemen (and other places) is not helping too much.

its too soon to think about it as a real movement.
S

Any links to some particular events?

Gold Member
I wish I could see Traktor commenting all of this. Too bad he is banned.


A Communist defending Islamists. Man...that would be fun to watch!
B

sterling_archer said:
Any links to some particular events?
Click to expand...

@behman, what are they chanting? Is it much too early to call this revolution?

@Irenicus, why was Traktor banned?

sterling_archer said:
@Irenicus, why was Traktor banned?
Click to expand...

Gold Member
Earlier this year, in September, the kurd in Baneh already did some protests and riots and were practically not covered by no media, and were quickly repressed.

The Iranian islamic regime is under heavy internal pressure since a long time, mostly from people that want a more western-like goverment, to religious and ethnic diferences (arabs, kurds, etc).

As far i know, this protest looks like as anti-goverment and "non colored", but in this times, you never know.

Mekorig said:
Earlier this year, in September, the kurd in Baneh already did some protests and riots and were practically not covered by no media, and were quickly repressed.

The Iranian islamic regime is under heavy internal pressure since a long time, mostly from people that want a more western-like goverment, to religious and ethnic diferences (arabs, kurds, etc).

As far i know, this protest looks like as anti-goverment and "non colored", but in this times, you never know.
Click to expand...

It does seem that in spite of a more theologically conservative government ever since the 1979 Iranian revolution.

This bitter divide on par with the left-right paradigm in western civilization still seems to exist.


There are women who protest the Hijab and have their own versions of feminism in Iran.

Gold Member
Remember Obama's Iran Deal? That would be interesting to watch out for if rumors were true.

So much for the New York Times theory that, thanks to Trumpian and Saudi bellicosity, the Iranian people have closed ranks behind their rulers. In November, the paper’s Tehran bureau chief, Thomas Erdbrink, devoted an extended feature to making this case, and it proved wildly popular with the pro-nuclear deal crowd in Washington.

“After years of cynicism, sneering or simply tuning out all things political,” wrote Erdbrink, “Iran’s urban middle classes have been swept up in a wave of nationalist fervor.” He went on: “Mr. Trump and the Saudis have helped the government achieve what years of repression could never accomplish: widespread public support for the hard-line view that the United States and Riyadh cannot be trusted.”

This week, tens of thousands of Iranians took to the streets to register their anger, not at Donald Trump or the House of Saud, but at the mullahs and their security apparatus. It was economic grievances that initially ignited the protests in the northeastern city of Mashhad. But soon the uprising grew and spread to at least 18 cities nationwide. And the slogans shifted from joblessness and corruption to opposition to the Islamic Republic in toto. These included:

“Not Gaza, Not Lebanon, Our Life Only for Iran!”

“We Will Die to Get Our Iran Back!”

“Clerics Out of Our Country!”

The outcome of the protests is hard to predict. So far, the movement is leaderless and appears to lack serious organization. The protesters face a regime that spends much of its energy and resources on ensuring its own survival and won’t hesitate to crack down viciously, as it did in 1999 and 2009. But whatever comes next, Iranians have already shattered one liberal myth: namely, that Donald Trump has revived the regime’s popularity at home.
Click to expand...

I still honestly don't understand what the Iranian people are protesting about.

Obama's deal with Iran proved zionists don't fully control the left. That's why it's important they control 'opposition' like breitbart (and even trump) to keep the same white Christians they're destroying deluded into dying for israel. That's how they ensure jewish Israeli victory they need a majority of left and right to support this bullshit.

Iraq taught them they just have to dress it up as 'human rights' to justify war.

Apparently in iran it's being justified as 'womens rights' to overthrow the government lol. I hate to say this but I think iran needs to stay Shia theocratic otherwise it will degrade into international jewish 'capitalism'.

infowarrior1 said:
Is this organically driven.Or is it orchestrated by NGO's and foreign backers?
Click to expand...

Saudi Arabia has a severe autocratic government that tightly controls its population and has financed Wahabi madrassas throughout the Moslem world for decades leading to Sunni fundamentalist jihadists becoming a global problem and existential threat to the Western Civilization. But they have a lot of money and oil and they've got some tit-for-tat back scratching going on with the Israelis.

Iran also has an autocratic government. But it has not funded jihadist madrassas. It also is not as rich as Saudi Arabia and does not bribe, I mean invest, as much in the west. It also has not reached an understanding with either the Israelis or the Saudis and actively fights against Israel and Saudi Arabia and Saudi and Israeli interests. And Iran and Iran's allies have recently achieved significant battlefield victories that weaken Israel's and Israel's ally Saudi Arabia's geopolitical positions.

Thus you know exactly which Moslem country is barbaric and terroristic and is a disgustingly undemocratic threat. Iran.

Cue the riots and the calls for revolution from the "Iranian people." 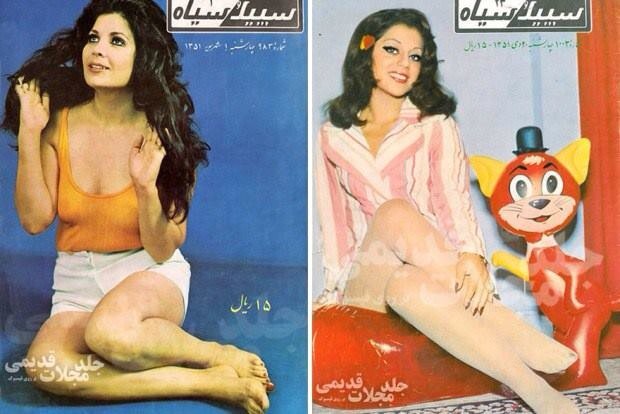