Is Greta Thunberg being abused by her globalist handlers?

Orthodox
Greta is a child actor who is making world tours admonishing Western people to save the environment. She parrots back things that her handlers tell her, and we already know what Hollywood does to child actors.

I wouldn't be surprised if she is being sexually abused right now, as she travels from city to city, or will soon be. In the meantime, we have to endure her lecturing us on the environment, without being able to critique her points, since "she's only a child." Nice trick, Satan.


Her handler is a Soros agent: 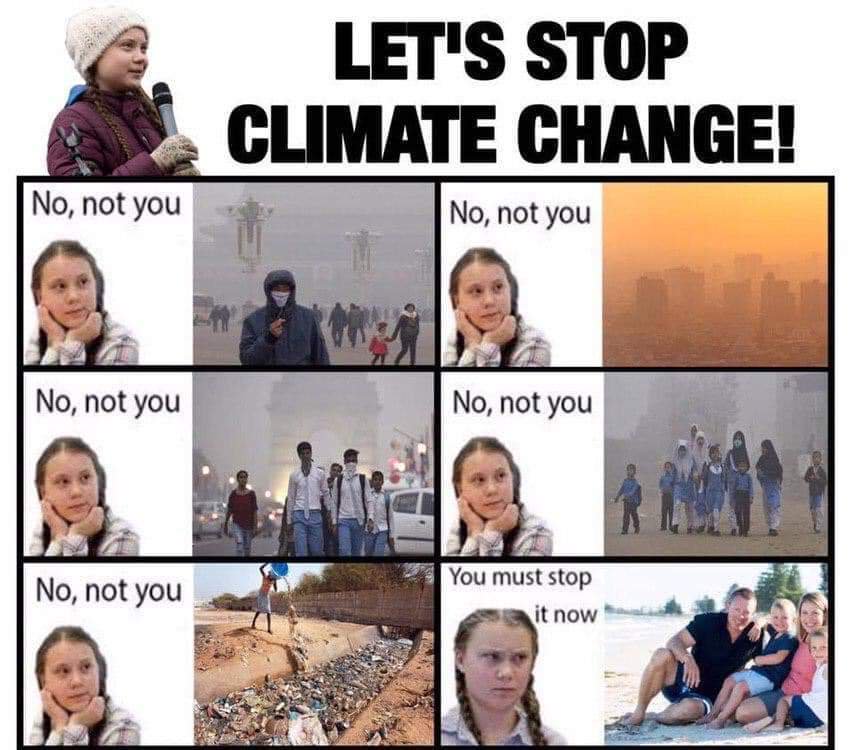 Banned
She fulfills all the check-boxes for a groomed actor, given her virtue-signalling parents and the fact that this climate change stuff is basically a full-time job for her at this point:

Adolescent climate change protester Greta Thunberg has stage-parents, literally. Her mother sang opera internationally until the teenager convinced her to quit due to greenhouse gas emissions from flying, and her father and grandfather both gained fame through acting and directing.

Now they've pivoted into the parental act of every stage-parent looking to secure the next generation of fame. Apparently, the Swedish version of a Teri Shields pimps their kid out — not to Penthouse, but to the cause of climate apocalypse.

For all that conservatives have rightly griped at the performative pointlessness of Thunberg's schtick, and for all that liberals have rightly griped that a waning but still significant segment of conservatives deny the reality of anthropogenic climate change, the biggest travesty lost in the hype about the Swedish activist who recently sailed to American shores is that her parents, the media, and the climate alarmist left are basically engaging in child abuse.

Cases of kids entering public discourse out of sheer discourse, such as Parkland survivors Cameron Kasky and Kyle Kashuv, are sometimes inevitable and sometimes valuable. Some political causes require spokesmen with lived experiences. But even as we saw in the aftermath of Parkland, putting children in the public spotlight is more likely to backfire on them than not.

The case of Greta Thunberg is even more egregious. Thunberg began suffering from depression as a child, by her own admission, in part because she learned about climate change at age eight. She was later diagnosed with autism and obsessive compulsive disorder and gradually became despondent as she obsessed over her fear of climate change. She developed mutism and an eating disorder so severe that she once went two months without food, and she stopped going to school. Her only sibling, a sister named Beata, also suffers from Asperger's and OCD, as well as ADHD.

Now tell me, does it seem healthy to place a child with this many mental illnesses under the spotlight of public scrutiny, with a sole focus on the very phenomenon and associated alarmism that triggered her in the first place?

If you're a fading opera starlet married into a family of fame, and your only two children are having exceptional trouble even attending school, then I suppose you can secure a bit more fame by milking your child's clinically diagnosed obsession. But given that Greta's mental struggles and triggers actually led her to the brink of death, the whole thing smacks of child abuse.

Conservatives shouldn't mock her. They should worry for her. Social media has made it too easy to prop up children as moral authorities — even children especially predisposed to crack under the pressure.
Click to expand...

In addition they let her skip school day in and day out (as opposed to malala yousafzai, who just wanted to Go to school, not skip it); and are making her eat some sort of vegan diet (vegan diets are bad).

Gold Member
This is her mother, with a weird skit centered on pizza...
C

She'll be cast aside in another few months just like everyone else the left uses.

Catholic
When I listen to her talk, I feel like this should be playing in the background:

She's an easy victim. I don't watch her screeds because the texts are cringy enough and I can't help but notice how out-of-touch with reality she is. The kind of climate action she calls for would disproportionately harm the poor and working class, two social classes she's likely had very little meaningful contact with. Her luxury yacht stunt further showcases how off the deep end she is and the attempted supposition all of us would have similar access as her and can waste two weeks sailing the Atlantic.

Dark Pool said:
In addition they let her skip school day in and day out (as opposed to malala yousafzai, who just wanted to Go to school, not skip it); and are making her eat some sort of vegan diet (vegan diets are bad).
Click to expand...

If you had been able to read Malala Yousafzai's Wikipedia page before it got a million edits it would have been clear that she was another child star.

She had no clue and was far too young to organise her PR campaign or even put together the arguments of her father that she had to parrot.

Milo Yiannopolous went after her in recent years: pointing out that her father wrote all her speeches from then to now, that - now she is a young adult - she has nothing further to say and can't improvise ad hoc ---- and that her fame-hungry, exploitative father has gone from promoting HIS schools in Pakistan to inveigling himself into a high paid UN job off the back of her near-assassination.

Neither he nor the BBC World Service, who were both putting her in harms way as the face of their PR campaign against the murderous Taliban, seemed to give a flying fuck about the risk they were exposing her to.

When she was shot they carried on just like the rest of the Media did after 9/11: like all their Christmases had come at once and that this was proof, proof I tell you, of the relevance of their own importance and relevance as journalists (or self publicists in her father's case).

As others have said: Child abuse disguised as activism.

This is her mother, with a weird skit centered on pizza...
Click to expand...

Makes sense - her mother probably thought that pimping her out for a public role is going to be the highlight to an ugly girl like Greta.

Ultimately it's just the usual shtick of using young impressionable people, pumping them full of lies and then applying them for the "just revolution".


It was done before - the Red Guards are a perfect example of that - teenage girls being taught a few things about medicine and then with full confidence replacing doctors and seasoned nurses because "they knew everything".

Now Greta also knows everything while in reality her program is top-down and is built on lies - plus - focuses mainly on the West while leaving other big polluters alone. The green fascim agenda is actually the one that will take away more freedoms than any other point. It is essential for them.

Whether Greta is abused or has some kind of mind-control done to her. Her family may be one of the real elite families and a little bit of sexual abuse is nothing to them.

Gold Member
This is the first thing to come to mind:

"Saddam is throwing babies out of incubators"


Nayirah al-Ṣabaḥ (Arabic: نيره الصباح‎), called "Nurse Nayirah" in the media, was a fifteen-year-old Kuwaiti girl, who alleged that she had witnessed the murder of infant children by Iraqi soldiers in Kuwait, in verbal testimony to the U.S. Congress, in the run up to the 1991 Gulf War. Her testimony, which was regarded as credible at the time, has since come to be regarded as wartime propaganda. The public relations firm Hill & Knowlton, which was in the employ of Citizens for a Free Kuwait, had arranged the testimony. Nayirah's testimony was widely publicized. Hill & Knowlton, which had filmed the hearing, sent out a video news release to Medialink, a firm which served about 700 television stations in the United States. That night, portions of the testimony aired on ABC's Nightline and NBC Nightly News reaching an estimated audience between 35 and 53 million Americans. Seven senators cited Nayirah's testimony in their speeches backing the use of force. President George Bush repeated the story at least ten times in the following weeks.
Click to expand...

Gold Member
It just hit me, that she is like the real life Lisa Simpson, grown up, I remember a book smart girl from my own school days have the same disconnected, smug air about her (she was friendless too). Same physiognomy too for that matter. Who did she quote in her Bebo profile back then? Lisa Simpson.

Banned
Catholic
Does a bear shit in the woods

I'd honestly never given any credence at all to alt-right child/crisis-actor memes...and then I saw the video of this chick on CNN. It's really got me wondering---there is something really off/deranged/disturbed about her. Her voice, her mannerisms. Completely weird and artificial. Forced. I can't put my finger on it but it's creepy as fuck.

Progressives (and her negligent parents) are perfectly fine with this 16-year old child bearing the weight of the world on her shoulders, the weight of this toxic/bruising climate debate and it's world-historical implications...but I guarantee if she were to say she wanted to marry and start a family in two years they'd tell her she was immature and too young for that kind of responsibility. Of course.

Btw, here's a screenshot of CNN right now. This pretty much sums up the rot---clown world doesn't even begin to really describe it:

Catholic
Gold Member
I'd imagine that she's a real hit on the dinner party circuit. Such a delight to be around.

Lecturing the West while ignoring China/India really is hypocrisy.

Climate change types are so easy to trigger just ask them if they have given up air travel or support an immigration moratorium/stopping third world population growth.

Greta's mother is the most batshit crazy cultural marxist psycopath Swede there is...

Her mother made a small career as an opera singer and went on TV on celebrity shows like Strictly Come Dancing. After that she made it her destiny to be on Twitter to virtue signal and attack precisly anyone who made an argument about the country's extreme immigration, very aggressively she was calling them racists, facists, Hitler and so on in order to still try and be relevant.

When I found out they were related I wasn't surprised one bit, the mother is absolutely insane and of course she would sell her daughter out for some extra social status and money. Social status is everything for leftists and her mother obviously gets points within her social circle when Greta is hyped up as a saint.

I've noticed the phenomena of how the left absolutely love having hyped up leading figures. Mandela, Mao Zedong, Castro, Che Guevara or Greta Thunberg. I don't know why it is but suppose it got something to do with their childish black and white world view...