911 said:
It's hard to believe any of the Q stuff with people like Ghislaine Maxwell totally free.
Click to expand...

I've studied Q, extensively, and I can tell you one thing for sure: It's a letter.
Click to expand...

What if Kushner is one of the good guys?

The Catalyst said:
What if Kushner is one of the good guys?
Click to expand...

The Catalyst said:
What if Kushner is one of the good guys?
Click to expand...

They believe reject Jesus Christ, and believe the Rebbe is the Messiah.

Note the article stressing the Seven Noahide Laws, which are said
to make it punishable by death to follow Jesus Christ, who is considered a false God.

Note the universal faith nature of the writing. Note the one eye with the planet in it.

What are the punishments for breaking these laws?

Tzvi Freeman December 31, 2019
in response to Jb:
One of the laws is to establish courts of law. Those courts will have to determine the appropriate punishment or corrective intervention for each offense.
Click to expand...

If you read further, there are 300+ religious laws that would then have to be obeyed. Remember what Jesus said about their Laws?

Chabbad are descendants of the Pharisees. Remember what Jesus said about them and their 'Justice'?[/quote]

And now I also think I'm understanding why Trump just gave Chabbad the Fed, and the whole point of the Planned Economic Crash. Note point four: Honour the sanctity of measured consumption.

There is a cure for this [seeking of wealth by the masses], you know. Listed in the US Constitution is a legal currency based on gold and silver which limits the money available to all and requires that it circulate. This alone would put a stop to overconsumption and poverty.
Click to expand...

Trump wasn't 'tricked' into this.

Gold Member
Note the text of this Bill George Bush passed in 1991:

It was pretty ordinary.
J

Gold Member
This Kenyan rapper "Bamboo" has turned to Christianity, and for a time lived in NYC and met many wealthy urban music stars such as Jay-Z, Akon, Russell Simmons, etc.

Gold Member
Excerpt from Fleccas and Cernovich discussing the occult, epstein and the dispelling effect that the virus is having on the media industrial complex

A couple of my favourite sources on Satanism and Hollywood are Jay's Analysis. Roosh has mentioned him recently. And, I like Vigilant Citizen. I am sure most know of these, just in case:

One of things I learned is how the Monarch butterfly, often seen in films, is sometimes associated with mind control.

Gold Member
Out Of Shadows :

As detailed by a Hollowood stuntman, come action director. An insider.

important for getting the message out

It's an excellent summary, but mostly of stuff we already knew. It's still very important because most people get their information through video, not the written word. As well, everyone in the video looks and acts like a normal and balanced person, not like some unshaven and overweight basement dweller wearing a tinfoil hat. Appearances always matter, but especially in this case.

But there were three things in it that at least I did not know:

1) Physiotherapists around Hollywood know about the pedophile rings because they have to treat their child victims.

2) I never made the connection that Operation Paperclip brought Nazi occultism into the US government and then into Hollywood via the CIA.

3) There was at least one national level established journalist, Liz Crokin, who took Pizzagate seriously and tried to report it.

This makes me wonder:

In relation to 1), it implies that Doctors and Nurses in Southern California know about the pedo rings as well.

In relation to 2), Chris Carter's (creator of the X-Files) belief that alien abduction stories were really about people being kidnapped by ruling entitities for experiments makes even more sense now.

There is also a German version available if you want to
forward this to your buddies in the German-speaking area:
https://www.youtube.com/watch?v=u054Z-Z_LcY

Gold Member
He may be Australian.
As opposed to being a part of, or linked to a well established American entertainment family.
He may be a seemingly nice guy & generally level-headed celebrity.
He may be popular & well liked.

However.
You don't get to the absolute top of Hellywood, if you're not willing to be a part of the 'Big Club'... 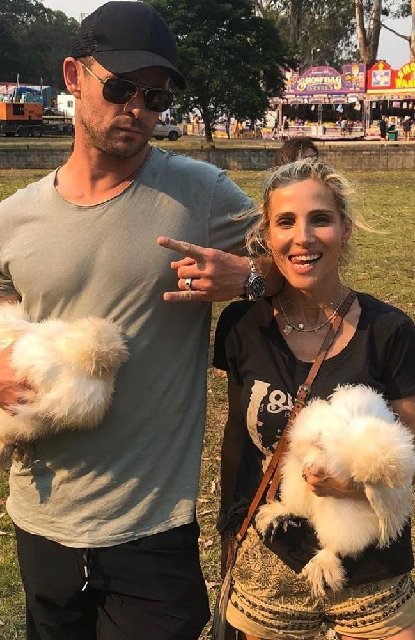 By their symbols you shall know them...
H

CynicalContrarian said:
He may be Australian.
As opposed to being a part of, or linked to a well established American entertainment family.
He may be a seemingly nice guy & generally level-headed celebrity.
He may be popular & well liked.

However.
You don't get to the absolute top of Hellywood, if you're not willing to be a part of the 'Big Club'...

By their symbols you shall know them...
Click to expand...

Well I think an actor with any integrity and no matter how desperate would never be in a film like Red Dawn....Actors aren't known for that though.
Not to mention if you one finger type maybe stay away from roles like Blackhat.

Pretty sure his brother was illegally working in the US before he got his "break" to boot.

As for Aussies I'd say Jim Jeffries probably had his asshole turned inside out and Heath Ledger. Mind blowing how revered that Joker role was! Maybe he was servicing the fans as much as Hollywood serviced him.
H

Thanks for sharing, thought the thumbnail looked familiar as I started to watch it tonight from a friends recommendation.

Noticed this woman in the video and another thread/s a few days ago, something very very off about her.
All making sense now (spirit cooking/Rothschild/Oprah/Bill Gates etc)

Gold Member
Can you provide a summary of the video? I'm not going to watch an hour of that witch just to find out what she is doing...