I'm not nearly as much of JQ truther as people here, but I've been sarcastically calling it "the 1/6 Holocaust" in an "agree and amplify" kinda way and it gets funny reactions, since people naturally shy away from such comparisons but also know they have to insist that 1/6 was some huge atrocity.

I'm gonna go onto some lefty reddits and try that.
I

Gold Member
The feds when they find an autistic kid online:

To play devil's advocate: I've mentioned before how authorities will suggest someone is an informant to discredit them with their groups. It ruins their credibility and fractures the ability to organize. If they aren't indicting him to make it seem he's compromised, how would we (or his supporters) know either way?

The way to deal with people who want to go fight is to tell them "I go to this Gym, if you wanna fight you can meet me there next week and we'll do it the legal way".

Easy_C said:
The way to deal with people who want to go fight is to tell them "I go to this Gym, if you wanna fight you can meet me there next week and we'll do it the legal way".=
Click to expand...

That would probably not work with a heckler though. If someone came up to I would just tell them to "Get out of my face" and ignore them. You definitely don't look good pursuing them and talking crap. It makes you look defensive.

Then again, some people are wired that if you provoke them, they feel the need to escalate regardless.

A: Frame matters as always. If you don't look scared and look unimpressed you'll get the result you're after. That isn't too hard if you actually do train regularly, because you practice enough to know you can beat down most of the tryhards in a ring.

B: You're not "talking crap" or escalating. You're refusing to escalate while also messaging that you're not shy of the prospect of violence.

I think the dude's response was a bit telling. If someone I dont know accused me of something I didnt do I wouldn't be drawing further attention to myself asking them to fight and acting overly defensive to the point that I was following him around the building.

No heckler is gonna come meet you at the gym you're at. He's trying to provoke you now. Old boy gave him exactly the reaction he wanted.

Getting into fist fights over public events or threatening to do so isn't a sign of being a badass... its insecurity.

I dont know much about the oathkeepers. I dont know if he's a fed or not. I am sure the group has been infiltrated by feds... just like every internet forum or pretty much anytime more than 3 people get together for a political reason.

And keep in mind the reason they're able to do so is because of the cell phones. Otherwise they'd have no idea if a half dozen people meet privately over some beers to vent. Man Who Sat in Pence’s Chair During 1/6 Event Pleads Guilty, Faces Up to 30 Years in Prison

Sitting in a chair is a very serious crime in a democracy that thrives on people not sitting in that chair. Reuters: An Idaho man who sat in then-Vice President Mike Pence’s chair during the Jan. 6 attack on the U.S. Capitol pleaded guilty on Wednesday to a criminal charge of obstructing an...
www.unz.com

An Idaho man who sat in then-Vice President Mike Pence’s chair during the Jan. 6 attack on the U.S. Capitol pleaded guilty on Wednesday to a criminal charge of obstructing an official proceeding.
Josiah Colt, a 35-year-old resident of Meridian, Idaho could face a sentence of up to 30 years in prison and a fine of up to $250,000, federal prosecutors said. They said that as part of his plea agreement, Colt agreed to cooperate with the investigation of the deadly attack.
More than 535 people have been arrested with taking part in the Jan. 6 violence, when supporters of former President Donald Trump smashed windows, fought with police and sent lawmakers and Pence scrambling for safety in a failed bid to stop Congress from certifying Trump’s election defeat.
Prosecutors said Colt entered the Capitol and headed to the U.S. Senate chamber, where he and other rioters forced their way past police into the gallery not long after senators were evacuated.
He then entered the Senate floor and ran to a chair reserved for the U.S. vice president, who sometimes presides over the Senate. Colt subsequently posted a video on Facebook in which he claimed to have been the first Capitol rioter to sit in a chair reserved for House Speaker Nancy Pelosi.

This prosecution of political dissidents is worse than anything you would see in China or Russia – by a lot. This is something you would only really see in Bolshevik Russia or China right after the revolution.


That’s logical, as we are in the middle of a communist style revolution.


Of course, this isn’t actually communism, but something much worse and gayer.


You are witnessing the last vestiges of your freedom being stripped from you.
Click to expand...

So pretty much the FBI did it then?

Their response seems to be a non-denial denial.

I wish something like this would be considered shocking.

Submitting to a temperature check to enter the building was a nice touch.

You can do whatever nefarious deed you wish but first submit to a slice of medical tyranny. You're now clear to wreak havoc, thank you and have a nice day. 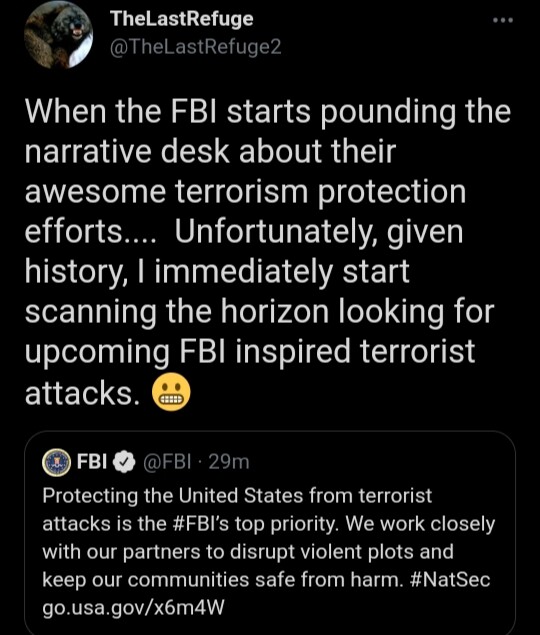