Well it looks like Creepy Joe Biden will announce his candidacy for President today.

Should be an interesting primary race as the Democrat party keeps getting more and more extreme. Many in the party don't like him simply because he is a white male. He's probably the least left of the 20 or so democrat candidates, and I'm interested to see how far left they will pull him. The further left he goes, the bigger Trump's margin will be.
S

Banned
Assuming he stays healthy and is reasonably sharp in public appearances, Biden would crush Trump.

Start with: he's a native of Pennsylvania. Biden would sweep the rust belt states Trump took in 2016 - PA, WI, MI and OH, with the possible exception of Indiana (Pence).

Plus, Trump hasn't done much other than install Federalist Society judges who will rule for corporations and government against individuals for the next 40 years.

Left economic policies, like healthcare and higher wages, are popular. Especially in the rust belt. Trump won because he coyly suggested he would govern to the left - like building infrastructure and protecting US manufacturing.
S

Banned
There are two things you can say for certain about Joe Biden, the first being that he's more widely liked than Hillary Clinton, and the second being that he's not going to ignore the Rust Belt states like Clinton did.

So Trump, who barely won last time, is now going in with two big disadvantages.

Protestant
I'm not doubting Biden could beat Trump. With the changing demographics and the fact Trump has really not done anything worthwhile for his base, Trump will have trouble against any Democrat. I just don't see what Biden has to offer. He is pretty much standard boring establishment Democrat. Pro-war, Pro-big banks, pro-wall street, pro-out of control immigration. I suppose he will campaign on socialist healthcare and ignore the elephant in the room that we can't afford socialist healthcare and an open border. I suppose he will campaign on taxing the "rich" which will really mean anyone who works and makes enough to not collect welfare.

Banned
Yeah there's nothing to get excited about with Biden, he doesn't really offer anything.

In terms of the election, he's a mannequin with a placard hanging from his chest reading "Generic Democrat".

I think that's why he's a threat, honestly. The public might not want a Bernie Sanders, but they also might not want Trump, and that's where he's a nice, easy, safe choice.

Catholic
Gold Member
His connection to Saint Barry of Chicago will help him tremendously.

Catholic
Gold Member
Isn't he a bit too old? He's four years older than Trump, and Trump is the oldest ever president at inauguration.
S

Banned
He is ancient, yeah.

That and the pedo thing are about the biggest issues.
S

Nobody buys the "pedo thing," they just see him as they touchy uncle or grandpa.

But at his age, Biden will have to pick a very strong running mate ready to go in case he pulls a William H. Harrison.

Someone with a national security background, either in Congress or a retired general or admiral. Probably a woman, too.

Nobody buys the "pedo thing," they just see him as they touchy uncle or grandpa.
Click to expand...

Would you elect for president a (very) "touchy uncle or grandpa" :dodgy: , though? Dude might not be a full-time perv, but as a moderately-perv old-timer, his place is in some sweet retirement home or sunny Floridian condo (far from the swimming-pool, mind you).

There might be a few other issues.... like when many people from the Obama-Biden administration under him at the DOJ, FBI, CIA start getting arrested for FISA spying, the Trump coup, pay for play, leaking, collusion etc... his sexual harrassment, him setting up illegal payments from China & Ukraine for his son, his family is a mess. 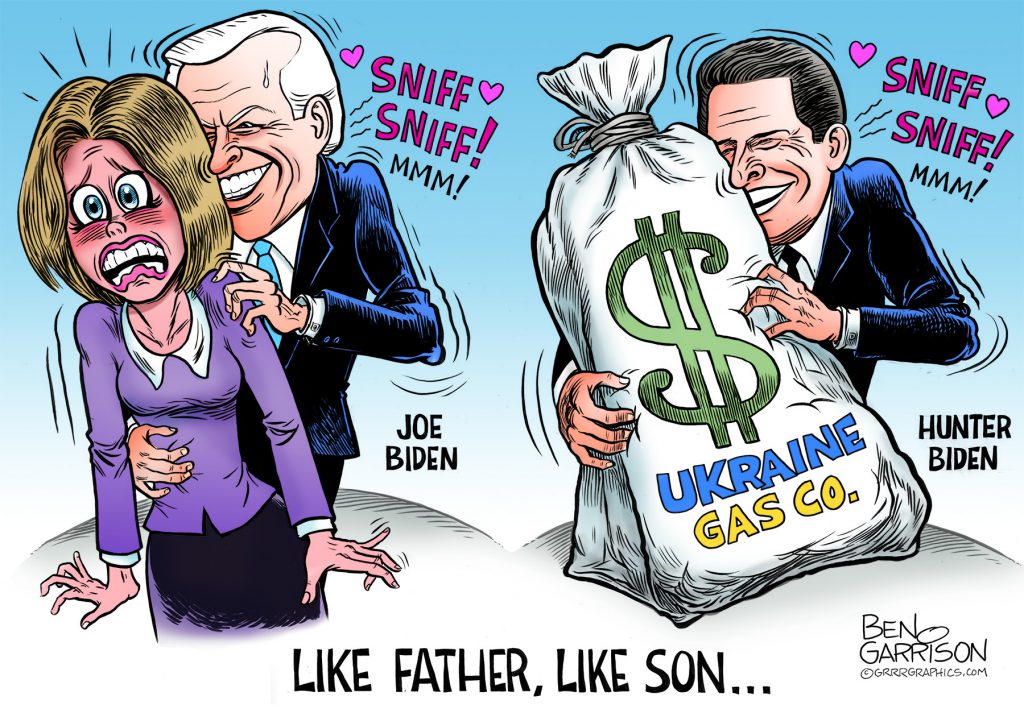 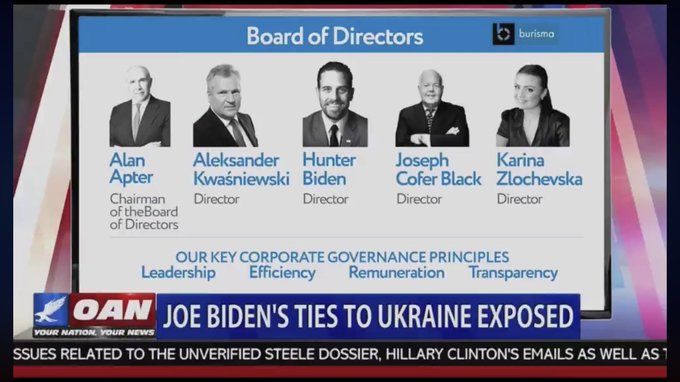 1. Biden’s Son’s Firm Scored a $1.5 Billion Deal with the Bank of China 10 Days After Joe Biden and His Son Flew to China Aboard Air Force Two

“In December of 2013, Vice President Joe Biden flies to Asia for a trip, and the centerpiece for that trip is a visit to Beijing, China,” said Schweizer. “To put this into context, in 2013, the Chinese have just exerted air rights over the South Pacific, the South China Sea. They basically have said, ‘If you want to fly in this area, you have to get Chinese approval. We are claiming sovereignty over this territory.’ Highly controversial in Japan, in the Philippines, and in other countries. Joe Biden is supposed to be going there to confront the Chinese. Well, he gets widely criticized on that trip for going soft on China. So basically, no challenging them, and Japan and other countries are quite upset about this.”

Elaborating, Schweizer said, “Well, I think the reason he goes soft on China is because with him on that trip, flying on Air Force Two, is his son Hunter Biden, and ten days after they return from China, Hunter Biden — who has this small firm, he has no background in private equity, he has no background in Chinese finance — gets a whopping $1.5 billion deal from the Chinese government. This is the Chinese government giving Joe Biden and a [John] Kerry confidante the management over this money, and they made huge fees off of this money, and it’s an example of this kind of corruption. That’s the first of three major deals that the Chinese government does with people who are either the children — that is the sons — or close aides to Vice President Biden or Secretary of State John Kerry.”

As Schweizer explains: “So [Hunter Biden’s firm] get this $1.5 billion to invest, and what they are supposed to do is basically invest in companies that benefit the Chinese government,” stated Schweizer. “So just think about this for a second. This is the vice president of the United States whose father is supposed to be commanding American presence and power in the Pacific to deal with the rising challenge from China, and his son is investing $1.5 billion of Chinese government money. So what do they do? They invest in an American high-precision tools company called Henniges, which used to be owned by Rocket Company, but they produce anti-vibration technologies which have a dual-use application, so this transaction actually requires the approval of the federal government, as it has national security implications. So again, the vice president’s son is helping the Chinese government take over a dual-use military technology-related company called Henniges.”

3. The Obama Justice Department Charged One of the Companies with Stealing U.S. Nuclear Secrets

“But it gets even worse because another investment that they make is in something called CGN—China General Nuclear—which is an atomic power company,” says Schweizer. “They invest in this company in 2014. A year later, what happens? The FBI arrests and charges senior officials in this company with stealing nuclear secrets in the United States. Specifically, they’re trying to get access to something called the AP-1000 nuclear reactor that is very similar to the ones that we put on U.S. submarines. So again, you have the son of the vice president, a close aide to the secretary of state who are investing in a company that is trying to steal nuclear secrets in the United States. It’s a stunning story, and here’s the thing: none of this is required to be disclosed because they’ve figured out a way to get around these disclosure laws.”

U.S. banking records show Hunter Biden’s American-based firm, Rosemont Seneca Partners LLC, received regular transfers into one of its accounts — usually more than $166,000 a month — from Burisma from spring 2014 through fall 2015, during a period when Vice President Biden was the main U.S. official dealing with Ukraine and its tense relations with Russia.

“Kathleen Biden Sobs in Court as She Details the Collapse of Her Marriage to Hunter But He’s No-Show,” screeched The Daily Mail.
https://www.dailymail.co.uk/news/ar...n-s-wife-sobs-court-judge-grants-divorce.html

There's almost as much dirt on Biden as there was on Hillary. Trump is like a Lion licking his lips right now just waiting for the debates.

Two Dem candidates who could take swings at the Reps are ignored but lets bring in a white guy with personal space issues and a questionable past. Oh and he was Obamas white-hand man during his presidency.

What does this fossil have to offer except more Obama level shit? He is going to get stomped.
S

Banned
Trump has proved scandals don't matter. So what if Biden and his family have some shady things? After Kushner and all of the Mueller cases, it will wash off Biden. Same old shit.

Banned
I think a Biden/Yang ticket is the most dangerous one the dems could put up. Biden secures the Obama lovers and old geriatrics, while Yang secures the young vote. Highly doubt it happens though because they'll force a woman to be on the ticket.

Sp5 said:
Trump has proved scandals don't matter. So what if Biden and his family have some shady things? After Kushner and all of the Mueller cases, it will wash off Biden. Same old shit.

Biden will beat Trump in every state Hillary won plus PA, OH, MI, WI. Maybe FL too
Click to expand...

Biden is a white guy, Trump is a white guy. Both boomers. I'll forgive certain voting blocs for being blaise about the next election.

Trump will win and his handlers will make sure of that.
C

Obama is not endorsing Biden at this stage in the game. However, Michael Avenatti is supporting Biden. I think this is more harm than help for Creepy Uncle Joe. A creep endorsing a creep.

Banned
Biden is dangerous because he's good at using moralistic and high-sounding language with no substance, like Obama. Americans lap that shit up far better than actual talk about policies (Yang).
E

CaptainCup said:
Obama is not endorsing Biden at this stage in the game. However, Michael Avenatti is supporting Biden. I think this is more harm than help for Creepy Uncle Joe. A creep endorsing a creep.
Click to expand...

I'd be shocked if Obama endorsed anyone other than Biden. Who will he endorse? Buttigieg? Kamala? That is essentially throwing away an endorsement.

He will probably wait a month or 2 then do the endorsement.

Catholic
Gold Member
He could endorse Buttgig, because they're both the products of the Chicago Dem establishment (David Axelrod, Jarett, the Pritzkers) and the deep state (Obama was also an intelligence asset). But eventually he and the whole Dem establishment will coalesce around Biden as the safer, better shot at the win. Buttgig and Kamala are just the insurance policy in case Biden stumbles.

Biden can easily beat Trump by playing down the identity politics once he gets the nomination, he will win by running from the center.
Share:
Twitter Email Share Link
Top