Joe couldn't afford the maintenance on that place with a $174,000 income.

Deepdiver said:
Steve Bannon live with Rudy Guliani the NYC crime fighting Elliot Ness of our era both Ripping Meth Krack Kokehead Hunter the China Russia Ukraine kickbacks king and Corrupt Old Joe who turns out Hunter had to pay half his bribes profits to... Begs the question how much did Joe have to cut in the China Kickbacks to coke snorting Kingpin Obama.

Rudy and Bannon demanding FBI director Wray resign now for sitting on Hunters computer for a year and only saying it was Russian misinformation and sly old killer crime boss Joe could say the China Russia kickback schemes were all 'discredited" and the NWO CFR Media runs with that as the DNC party line... Damn Meth and Crack must really take over your brain for Hunter to bugger up such a cushy bag man racket for his old man.

This was pretty excellent breakdown. People seem to forget Guliani took down mobsters in NY during his time as prosecutor. This is his bread and butter.

Wray has to go. No doubt. He's part of the Comey/Strozk class of leftist bureaucrats that are only interested in protecting the oligarchs.

Gold Member
Instead of investigating Biden Syndicate, FBI is focusing on NY Post. Is that to imply Biden's crew & support are likely to have Toxoplasmosis...?
IE that brain altering & cat derived parasite?

911 said:
If Trump loses the election next month, it will be because of his failure to manage his personnel as the chief executive. 4 years into his tenure and it looks like he hasn't made a dent into the swamp through personnel choices and firings he could have made.
Click to expand...

As Trump said when elected he has to govern with experienced staff and he only had two pools to choose from Clinton-Obama-Biden
Saul Alinsky Ruled by Radicals Marxists or Bush HW and W Chaney CFR NWO Neocon Globalists...

MAGA folks just did not have the needed KSAs.

Deepdiver said:
As Trump said when elected he has to govern with experienced staff and he only had two pools to choose from Clinton-Obama-Biden
Saul Alinsky Ruled by Radicals Marxists or Bush HW and W Chaney CFR NWO Neocon Globalists...

MAGA folks just did not have the needed KSAs.
Click to expand...

Ah, yes, the old "drain the swamp by filling it with swamp water" technique. Age old method that's sure to work. After all where would you ever find clean water?????? 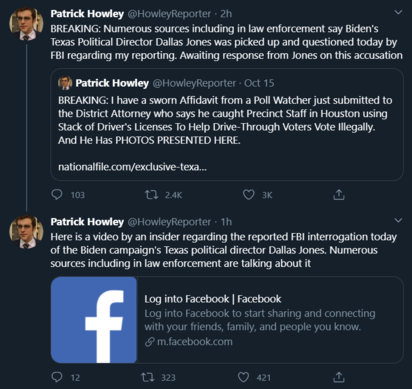 It could well be legit (not saying it is) seeing as how it is legal for congress to insider trade, and he spent 100 years there.

In the off-chance that Biden gets elected. It will be a short run:

Gold Member
I just feel bad for Joe. The guy should be at home hanging out with his grandkids before social services takes them away.

So the whole Bannon-Trump "feud" was rope-a-dope then?

renotime said:
I just feel bad for Joe. The guy should be at home hanging out with his grandkids before social services takes them away.
Click to expand...

I don't know, this appearance of his was surprisingly coherent.

Biden is apparently calling lids until after the final debate.

Dusty said:
Like Al Capone was taken down by tax laws, did Big Guy Joe pay taxes on the money Hunter kicked back to him? Is anyone asking that question?

Wouldnt it be hilarious - nay poetic - if Biden is taken down by taxes, while T’s taxes are clean as a whistle?
Click to expand...

Biden’s are not only guilty of bribes and public corruption, but also money laundering, tax evasion, and conspiracy/treason. The whole basis of impeachment was around phony Ukraine allegetions, and since Biden knew they were phony it’s treason.