Supreme Court packing/dismantling, immediate amnesty for all undocumented immigrants, overhaul or elimination of the Electoral College, and prosecution or demonetization of Trump donors are all things I've recently heard liberal friends (well, erstwhile friends) of mine say the Dems should do the second they get into power, whether it's 2020 or 2024. While unsurprising, it's still incredible to hear them grit that out with 100% bitter sincerity. This no longer seems about improving the climate, equal rights for [XYZ demographic], or a "woman's right to choose." I really do think they want nothing less than the most vicious, lasting retribution possible for the last four years.

Some of them say the last four years have given them trauma, and I totally believe it. These are more like the reactions of wounded feral animals.

gework said:
Seems Biden has transmitted dementia to H-dawg II. No precedant for how it may have happened.

CynicalContrarian said:
One cannot be altruistic nor egalitarian with the sinister. Looks fox news decided to pick this up, that means its now mainstream, and this is a big deal for election.

Gold Member
I think the WSJ was about to do a story today but heard they chickened out. 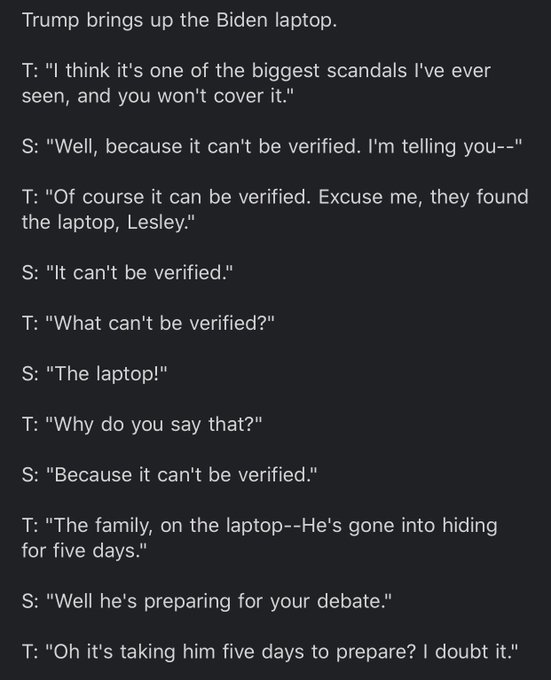 Gold Member
The dam is bursting. The press in the closing two weeks of the campaign:

B. The Enemy of the People

D. Need to face military tribunals for Sedition and Treason

E. What would Presidents Xi and Putin do?

Cobra said:
I think the WSJ was about to do a story today but heard they chickened out.
Click to expand...

They have published at least one and it's not flattering to Hunter. The mainstream-adjacent publications that have covered this properly are: NYPost, Fox News and WSJ are all News Corp. (Murdoch). Murdoch is not a globalist. He is a rare free-agent who is in it for himself; with no affiliation to groups like The CFR, Trilateral etc. that all other high-level media moguls are part of. RT has also covered it heavily.

There are about five on the laptop from hell.

As noted earlier. It seems apparent the Dem-MSM complex are running scared. According to what's been put out The FBI knew that Bannon and associates were in possession of the laptop, which they tried to obtain from him in August when they arrested him aboard the Chinese dissident billionaire's (Gou) yacht. Guo's media frontman (Ding) was talking about the laptop in late September and said the contents had been sent to Crazy Nancy (Pelosi) and The DOJ. So they knew this was coming, which was why Twitter was ready to go nuclear on blocking this story's spread.

It appears that there could be another source of information from these Chinese (Gou and Ding), both of whom have been photographed with Guiliani/Bannon. As Ding has mentioned that there are video(s) of Hunter Biden being given pre-teen girl(s) to violently sexually assault. He states these were videos recorded by The CCP. So why would Hunter have them on his laptop? There is also a rumour of another laptop in Ukraine. It seems everyone has Hunter's laptop, but himself.

Compare how Guiliani or Trump deal with attacks, like muh Russians or (((Borat))). They deny. No one has denied HB's laptop. They either refuse to answer or call it a smear.

@Cobra - I believe you are a lawyer. Do you have any insight into what legal proceedings against The Biden Crime Family might look like and how that could play out? It seems they took Manafort down for less than what the Bidens have done. And the three years of "muh Russians" was based on rumours from Hillary flunkies. Obviously The FBI is not going to do anything,Barr is apparently useless. How would action be taken. It almost seems as Republicans don't know how to take any action.


On independents. I think there is enough info to make enough people swing to Trump or 3rd party or abstaining. Independents must more discerning, empirical and suspicious of cartelism and the emerging one-party-Demorcart-society. I read a report from an allegedly neutral think tank the produced a report called something like a disinformation Index. Who was at the top? NYT. The bottom? Breitbart. Reasoning: Breitbart is Russian influence peddling. Nothing on NYT pushing lies for 3rd years on Russian influence peddling. Anyway, their report had traffic levels for sites and Breitbart was listed at 66 million visit or visitors per month. The dissident right sites get a lot of traffic and they will be shared by their Republican friends. There will be some eggheads that will only see CNN and ABC, but enough will be able to see Hunter's former business partners coming out and dishing the dirt on The Biden Crime Family, which validates the authenticity of the laptop from hell. And I think independents will be suspicious with MSM's obvious cover-up and batting for Joe.
Last edited: October 22, 2020 Christopher Balding is a professor who lived and taught in China. I follow him for investment research purposes, he is regarded as an expert on the region. He just posted an insane document:

ShareA number of months ago, I was approached by an individual I had known for the better half of a decade. I had known this individually professionally and enjoyed their company and deep insight into our overlapping professional interests. Consequently, … Continue reading →
www.baldingsworld.com

CynicalContrarian said:
Kunty Kamala must be rubbing her hands with glee in the background.
Thankfully, the only way she would be POTUS is due to mass ballot fraud.
Click to expand...

She can actually win without massive fraud this time around; she has a billion+ in campaign money, the MSM shilling for her, the covid hysteria aimed at Rep Boomers and the full weight of the GAFA/tech algorithms working to suppress real news and feed voters bad propaganda.

Sorter said:
Christopher Balding is a professor who lived and taught in China. I follow him for investment research purposes, he is regarded as an expert on the region. He just posted an insane document:

ShareA number of months ago, I was approached by an individual I had known for the better half of a decade. I had known this individually professionally and enjoyed their company and deep insight into our overlapping professional interests. Consequently, … Continue reading →
www.baldingsworld.com
Click to expand...

Balding is one of the best sources for information about China. He had an excellent blog when he was in China and then went coronavirus weirdo for a while. It looks like he has delivered some incredible goods with this report.

He was publishing information about the Chinese economy that was peerless for many years. He was in country, working in Shenzhen. I looked through some of the report, it is very well done.

Gold Member
Surprised they allowed her to speak for so long uninterrupted :

Gold Member
All these big names need to tag the relevant parties in, more often.
Make them feel the heat.