Justin Trudeau is a cuck clown

His Father could had been one too (purposely sent in English-speaking soldiers in a conspiracy to make his cultural brethren violently raise up and leave).

Notice Quebec uses trickery on the census to make it look "multicultural" but if you merge English and French speakers then it's a 87% white province. That's whiter than Portland Oregon (which for a lot of Americans is their whitest city) and a lot of that 13% is probably just in Montreal's English quarter and they would leave Quebec upon separation too. The daycare program that Canada pays for is also boosting up the French birthrate too.

So not only is Trudeau a cuck and a genocider of Anglo Canadians but he is likely very well a Quebec nationalist deep in the closet.
Click to expand...

that's a very unlikely scenario. I ve never been in North-America but I know that trudeau is promoting "francophonie" in Quebec. Which means , most of the immigrants will come from french-speaking african former colonies.
The result will be a second multicultural France.

NoMoreTO said:
Stephen Harper lays it down pretty well here. It just reinforces how much of a cuck clown airhead Trudeau is. Ben Shapiro can barely keep up.

Say what you want about him being a globalist, but we had someone with skills, who knew the files, who knew history and economics. FUUUCKK.

We had a guy who was a true intellectual, a Christian... now we have a wannabe muslim surfer dude backpacking feminist cuck.

Good well rounded conversation with insights into Trade Balances, Populism, The Middle Class & the hatred of our own society by liberals. I wish he talked like this when he was PM. I still gotta read the new book.

Ben. Meet someone much smarter than you.

Maybe we need to be talking about building a Wall on the Northern Border also....

ChefAllDay said:
Turdeau just announced a 600million dollar buy off of Canadian media going into an election year. Our little dictator isn't even trying to cover his communist tracks anymore.

Of course the union loves supports it. How stupid can we be, if this guy gets voted in again in 2019 we are in trouble.
Click to expand...

In addition don't forget the non-print media in the country, CBC (funded by taxpayers) and the media wings of the Robellus Telcom cartel (CTV, City)

Don't expect any good coverage for Max next election from most outlets, as he's a sure bet to lower subsidies to the CBC, cut this $600 print media bailout and in regards to Robellus, he wants to open up Canada's industry to outside competition, threatening the oligopoly gravy train.

Who knows though, he could play ball with Robellus, entice them with cutting Net Neutrality, which would greatly benefit them, and secure proper fair coverage.

Probably would be enticing to the Shaw family, they control Global, would benefit with cutting net neutrality and are less exposed to potential outsiders compared to RoBellUs. Could help him shore up Western support...

(Bernier Camp, if you're reading this I'm open to help in 2019, send me a Private Message)

Emancipator said:
(Bernier Camp, if you're reading this I'm open to help in 2019, shoot a PM)
Click to expand...

Maybe just clarify that last bit, in case someone takes it the wrong way...?

The local People's Party association is meeting next week and I hope to get a better sense of where we're going with it.

Emancipator said:
(Bernier Camp, if you're reading this I'm open to help in 2019, shoot a PM)
Click to expand...

Maybe just clarify that last bit, in case someone takes it the wrong way...?

The local People's Party association is meeting next week and I hope to get a better sense of where we're going with it.
Click to expand...

EDIT: Bernier Camp, if you're reading this I'm open to help in 2019, slide into my DMs (aka shoot me a Private Message)
C

Gold Member
As much as the PPC looks good right now, I think what will happen is that the PPC will splinter the conservative vote between them and the CPC almost ensuring the Liberals get more votes in the upcoming election.

The focus should be on getting Trudeau out asap and then going from there and that means unifying the conservative vote.

Gold Member
^Agree CC, I was strongly on Team Bernier back when the Tories were electing their leader, I’m still not a fan of Scheer but he’s our best bet at ousting PM Peoplekind. I’m optimistic that Canadians are waking up to just how bad Trudeau is, people on my FB aren’t sticking up for him like they were before, everyone can plainly see that the guy is an epic failure. Still, this is Canada, so I wouldn’t be totally surprised if the Liberals get back in, especially with Bernier splitting the vote.

Scotian, I really don't know this time around. Normally I would be on board with the "let's just get Trudeau out" line, but this time I'm not so sure. Scheer is weak, and he is wishy-washy or silent on issues where he should be taking a decisive stand (immigration, oil&gas). If he got in, the media party would be relentless in tearing him down and he would become another 4-year placeholder waiting for the next Liberal gov't to come in and keep doing what they do.

If I can use an American analogy, Romney 2012 would just have guaranteed a Clinton presidency in 2016; instead, 4 more years of Obama got them Trump.

I think I'm ready to help try and push Bernier onto the national stage in a meaningful way, and let Scheer and the Conservatives flounder. If some of them can jump on the Bernier train, so much the better.

Gold Member
I see what you’re saying but I’m not sure we Can handle another Trudeau term, even if it’s a minority government. If he wins again I’ll probably move to the US, I’ve been looking into it lately, I can’t be the only one.

Having lived in Ontario through the Liberal Years of McGuinty (deficit king) and Kathleen Wynne (homo agenda), never underestimate the amount of social decay and financial irresponsibility that can occur with this type of government.
C

Gold Member
If he wins again, he will attempt and probably will succeed at disarming law abiding Canadians. Bill C71 is already in motion.

Draft legislation proposed by the government of Canada on 20 March 2018. It could be passed into law in early 2019.

Aimed at more than 2 million men and women with a federal firearm Possession and Acquisition Licence (PAL), such as hunters, farmers recreational shooters, athletes and firearm collectors.

Would increase firearm confiscations, increase tracking of licence holders, and increase restrictions to get or keep a licence and to buy, sell or transport firearms. For example, it would become a crime to take a lawfully owned handgun to an airport, border crossing or a gunsmith without specific police permission.

Government is promoting it as “legislation that prioritizes public safety and is practical for firearms owners.”

Makes it harder to obtain and keep your gun licence (PAL).

Bans rifles that have been sold in Canada for a decade and are owned by 10,000 – 15,000 people. Imprisons those owners if they don’t meet new ownership requirements, but includes no plan to inform the owners of the new requirements. Even if they fulfill the requirements, police will confiscate the firearms after the owners die. (Some people call this confiscation after death “grandfathering.”)

Tracks PAL holders who plan to buy, sell or give away guns, even if the transfer isn’t completed (connections registry).

Requires stores to register you and your guns (firearm registry).

Stops you from transporting your guns to and from airport, border, gunshow, gunsmith without special permission (Authorizations To Transport).
Click to expand...

Speaking to Montreal radio station 98.5 FM today on the anniversary of the 1989 Ecole Polytechnique massacre, Trudeau did not rule out a full ban when asked by the host.

The prime minister says the government is looking at different alternatives to address a situation he called unacceptable. But he says the goal is to limit the easy access criminals have to handguns and assault weapons.

In 2015, Trudeau campaigned on a promise to get handguns and assault weapons off the streets, but gun-control advocates recently criticized the government for failing to follow through.

Today's comments come as Montreal marks the 29th anniversary of shootings that killed 14 women at the Ecole Polytechnique engineering school.

Trudeau is scheduled to join Premier Francois Legault and other dignitaries at the end of the day at a memorial event on Mount Royal.

^^ya don't worry, I think I know a few people who'll be shopping for shovels and some large diameter PVC pipe. Maybe I'll rent out my post-hole digger.
C

Gold Member
"I lost it while fishing." 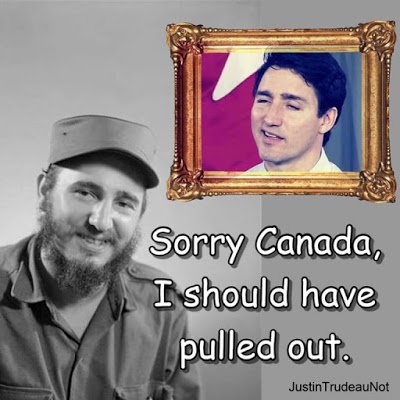 Black Pigeon SAVAGES northern Barack Obama aka Justin Trudeau. "Church of diversity" and Justin apologizing and making a fool of himself in front of the world.

What Pigeon never mentions is America may have to deal with the fallout its inbred cousin up north is responsible for. We may have to build a wall up north haha. GOD DAMN IT YOU CANUCKS!!!!!!