TruckDriver9 said:
The dam structure is intact - the road bridge section atop of the dam was blown up.
Photos from the day of the pull out

By now the rest of the road canvas could be down, but the dam itself wasn't breached (at this time).


Nikolaev was in range of Russian artillery for more than half a year and wasn't evacuated.
OPSEC is the most likely reason - there could be some Russian loyalists/spies left behind who could provide intel on troop and equipment placement.
Click to expand...

Oh, okay, I thought I read about blowing up the dam in one of the Russian channels so assumed it's confirmed.
T

Re: Kherson
1. Russia abandoned it without a fight - The ukrainian Kherson offensive begun on August 29, since than, for more than 2 months Russian troops fought and defended the area against superior number of enemy forces. For more than 2 months ukrainians have been launching attack after attack almost on a daily basis, sending waves of soldiers to charge through the open steppe in almost suicidal attacks with marginal gains on the northern flank. During that time, the ukrainians suffered tremendous losses, while the exact number of casualties will never be known some sources claim them to be in tens of thousands - for example back in early October col. Douglas Macgregor estimated ukrainian losses in Kherson at more than 20k (I go with his estimate, since he's the only military expert/pundit with real combat experience), and now we have November so that number could have easily reach 30k.
2. It's a disaster - Yes, it's a disaster for the ukrainians, they lost a division worth of man and equipment and at the end of the day they were unable to capture or destroy a single Russian formation (doesn't mean that there were no Russian casualties, but not a single unit - whether a company or a battalion was annihilated).
3. If it was going so "great" why did the Russians pulled out? - Surovikin made his case quite clear, in what was the first (I think) example of straightforward and honest communication, he pointed out (once in October, when he took command and then at the time of the pull out) that they were unable to overcome the logistic challenges - all the supply lines had to go through pontoon bridges and ferry crossings across the Dnieper River, and with the threat to the dam in Nova Kakhovka it was just to dangerous to keep the troops on the west bank. Had the ukrainins breached the dam, the flood wave would wash away all the crossings and the entire Russian group would be stranded, cut of from supplies for weeks and facing superior number of enemy troops - and that would be a catastrophe. Losing ground and a regional center is by all means a defeat, but losing up to 30k troops would be even more so.
On a side note, but really interesting, is the fact that the most oustopken hardliners (Kadyrov and Prigozhin) support this decision.
4. Russia is willing to give up ground to save it's troops, ukraine is willing to sacrifice it's troops to take back ground - One approach is sustainable, the other isn't. At the same time, since the fall of Lyman at the beginning of October, ukrainians have been storming Russian positions in the east on a daily basis with no gains whatsoever - the body count is grownig.
5. Could Russia avoid this situation or deploy some countermeasures? - It comes down to the threat assessment, HIMARS missiles weren't the problem (they don't pack enough punch to breach the dam), but the possible arrival of heavier munnitions such as ATACMS or Storm Shadow air launched cruise missiles could present a challenge. And there's not much that Russians could do to stop a scuba demolition team or underwater kamikaze drones.
We've got no idea what kind of intel the Russians had, but it had to be serious since they begun the pull out back in October.
6. Could Russia turn Kherson city into a stronghold? - Tough question and even a tougher decision to make. In theory it would make sense to leave a brigade size element in the city - they would most certainly tie down a significant part of ukrainian troops down there and they would be able to inflict casualties on them. But at what cost ? All the soldiers assigned to this Alamo would be de facto sentenced death - not a call I would like to make.
7. Will the ukrainians cross the river and charge into Crimea? - Highly unlikely. Forcing the Dnieper River is downright suicidal, I don't think that even the ukrainian command has the stomach for it, and even if the crossing was successful the strike force would be in the same predicament that the Russians were before - with all the supply lines going through the river and with the same threat to the dam upon them. They will definitely launch raiding parties across the river (and across the sea from Ochakiv into the Kinburn Spit) to harass and tie down the Russian forces.
The more likely scenario is a ukrainian strike from Zaporozhye - from Orikhiv in the direction of Melitopol and from Hulyaypole in the direction of Berdyansk - to cut throgh the land bridge between Russia and and Crimea.
Last edited: November 14, 2022
T

2 Right Hands said:
Oh, okay, I thought I read about blowing up the dam in one of the Russian channels so assumed it's confirmed.
Click to expand...

The fllood wave would be so massive that it would be in all the news 24/7.
I think they'll blow it up if the ukrainians manage to cross the river - in a reverse of what the ukrainians were planning to do to them. Blowing up the dam prematurely would only take this threat out of equation and make things easier for the ukrainians.
Last edited: November 14, 2022

Orthodox Inquirer
I would be curious to see if we get more details about what kind of things the Russians pulled out of Kherson besides people and prized artworks, etc. The withdrawal operation took what 2-3 weeks? "Say, isn't that a vodka distillery?"

Thomas More said:
My typos turned out worse than usual on this post. Hopefully it's clear I meant they blew the dam themselves.
Click to expand...


"The authorities of the Volyn region in western Ukraine reported the destruction of an energy infrastructure facility as a result of an air strike, said the head of the Volyn regional administration, Yuriy Pogulyaiko."
"Ukrainian mobile operators have limited the operation of some services in order to save electricity to be able to make calls, the mayor of Lvov said."
"In Kiev, the arrival at the building of the General Staff of the Armed Forces of Ukraine and the operational command was confirmed."
There are reports of the passage of another batch of cruise missiles over the Cherkasy region towards Kiev.
Click to expand...

Weather forecast for Kiev in Fahrenheit:

Zelensky and the rest of UA high command should’ve been liquidated yesterday in Herson. Someone missed a brilliant chance…

It's possible it's Russia, but I highly expect to see this was Ukraine, and long after they know this is true they still continue to accuse Russia.

Catholic
Gold Member
Apparently the target struck was a railway/train, probably a transit hub for Ukrainian weapons, so not only completely legit target, but also way overdue. It also looks like a successful high-precision bombing. 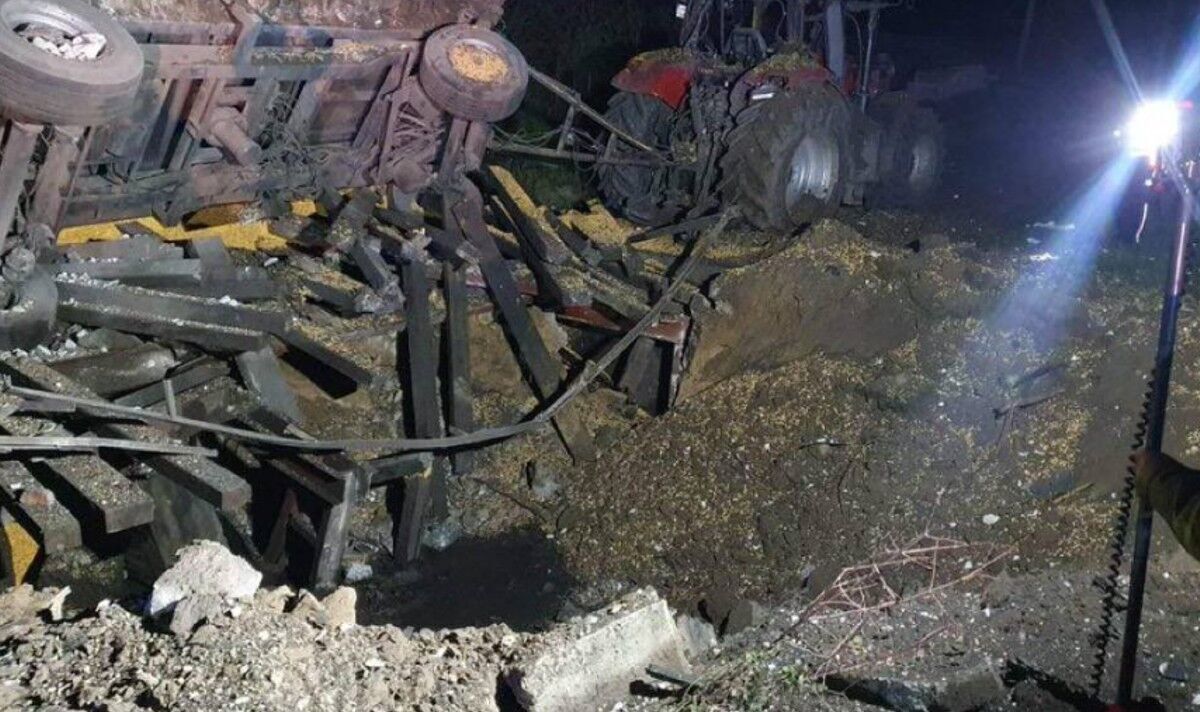 The Prime Minister of Poland has called an emergency meeting following the explosion.

911 said:
Apparently the target struck was a railway/train, probably a transit hub for Ukrainian weapons, so not only completely legit target, but also way overdue.
Click to expand...

This reminds me of when some of Switzerland's border towns were "accidentally" bombed in world war 2 by the americans.
Apparently, many of the bombed Swiss places had also been secret supply lines for the Germans. 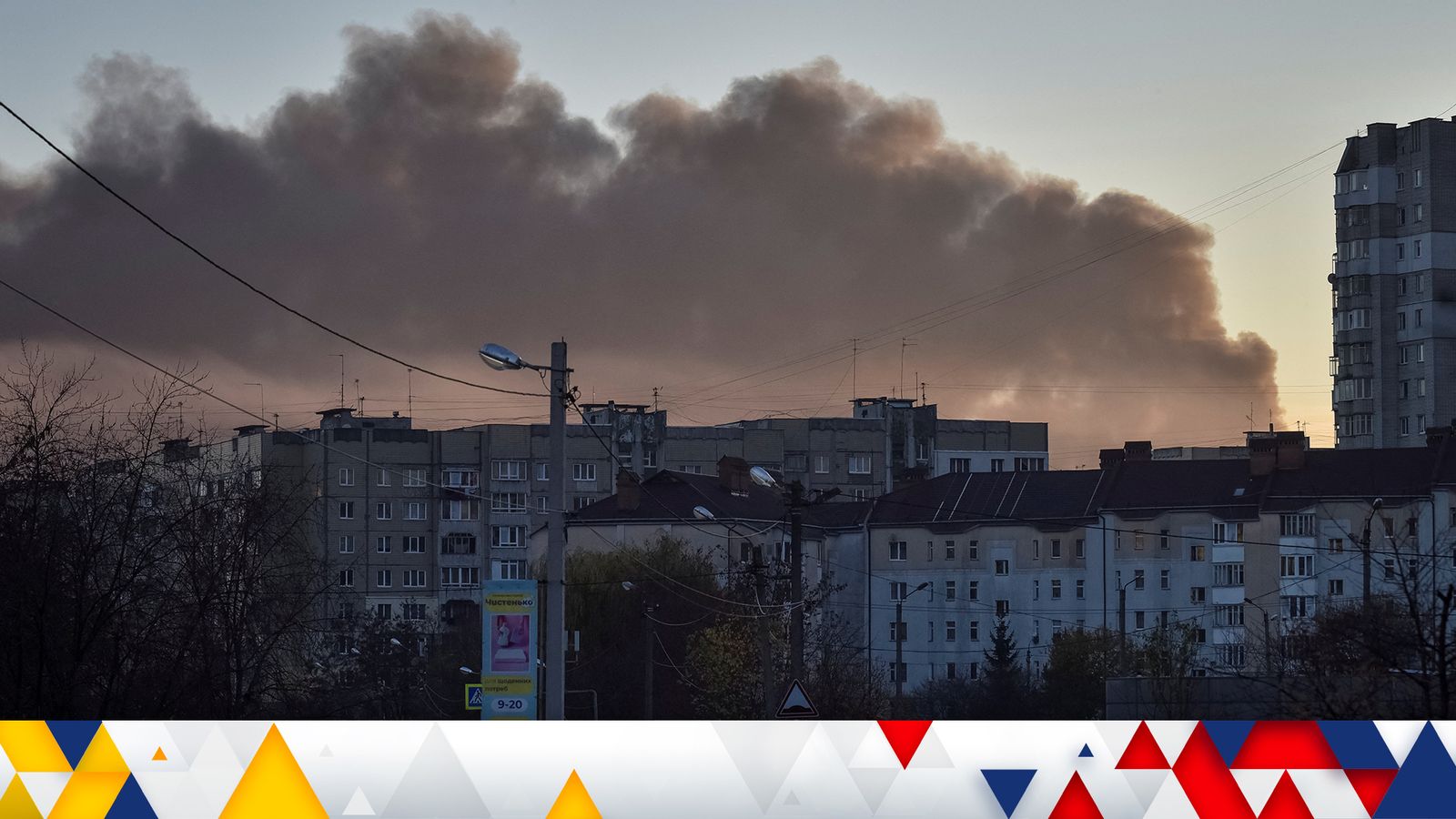 Thank goodness. I'm sure Poland doesn't mind having its citizens blown up by a Ukrainian missile. No need for article 5 in this case!

Caduceus said:
Anyone can confirm if this is true ?


So after "all the Ukrainians of Kherson" celebrating in the streets yesterday, they now are being forced out of the city by their own "liberators" ??

I guess they ran out of lampposts to pillory. 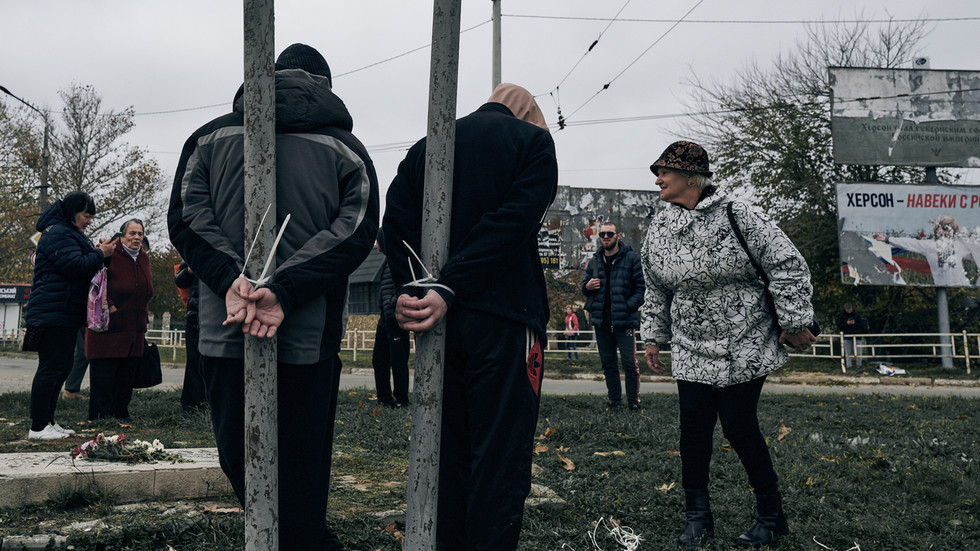 Alleged Russian collaborators have reportedly been tied to poles in the city of Kherson, as seen in photographs published by AP

According to the AP description, the people were “alleged collaborators.” It didn’t explain how the punishment had come about. Pillorying is not part of the Ukrainian legal system but has been used by nationalists in the country in recent years.
Click to expand...

Extrajudicial punishment is a part of democracy. It is Who We Are. Pillorying is the will of the people!

Moderator
Orthodox
If I'm Poland, I have a couple of long term strategic goals. ( I think this is a useful thought exercise because Poland, unlike nations such as Germany, has a real nationalistic spirit and the goals I am about to list are things normal Poles can get behind given some psychological operations)

1. Weaken Russia, my biggest geopolitical opponent
2. Retake some territory with Polish speakers or a culture similar to mine (Lviv)
3. Protect my northern flank which currently is bordered by a Russian exclave, Kaliningrad, which also happens to be prime real estate.

1. Is straightforward enough and can theoretically be accomplished in the same way everyone else is doing it, by training and arming Ukrainians, but if Ukraine and NATO loses too badly, Russia will be stronger than before, so this is a high stakes game.
2. Is difficult, because your political alliance is ostensibly allied with Ukraine, which controls Lviv.
3. Is risky and solving this issue would result in a massive war, but lead to a big payoff.

Retaking Lviv is possible, in my estimation, only if Ukraine is badly beaten and Poland finds itself in a situation where it can trigger Article 5 and call in NATO to actively engage Russia. Then Poland can come into western Ukraine as "peacekeepers." This could also solve the Kaliningrad issue for them, but only after a third world war.

There is an opportunity for Poland to take Kaliningrad without Lviv - that would require both Ukraine and Russia to essentially demilitarize each other after a long and bloody war - then Poland's involvement would be what tips the scales decisively in favor of Ukraine/NATO, but again this would require the war to drag on much longer, and this is why, I believe Belarus is not more involved. They are there to discourage further escalation from Poland or the Baltic states.

Protestant
Let the anger flow through you...

It_is_my_time said:
Let the anger flow through you... 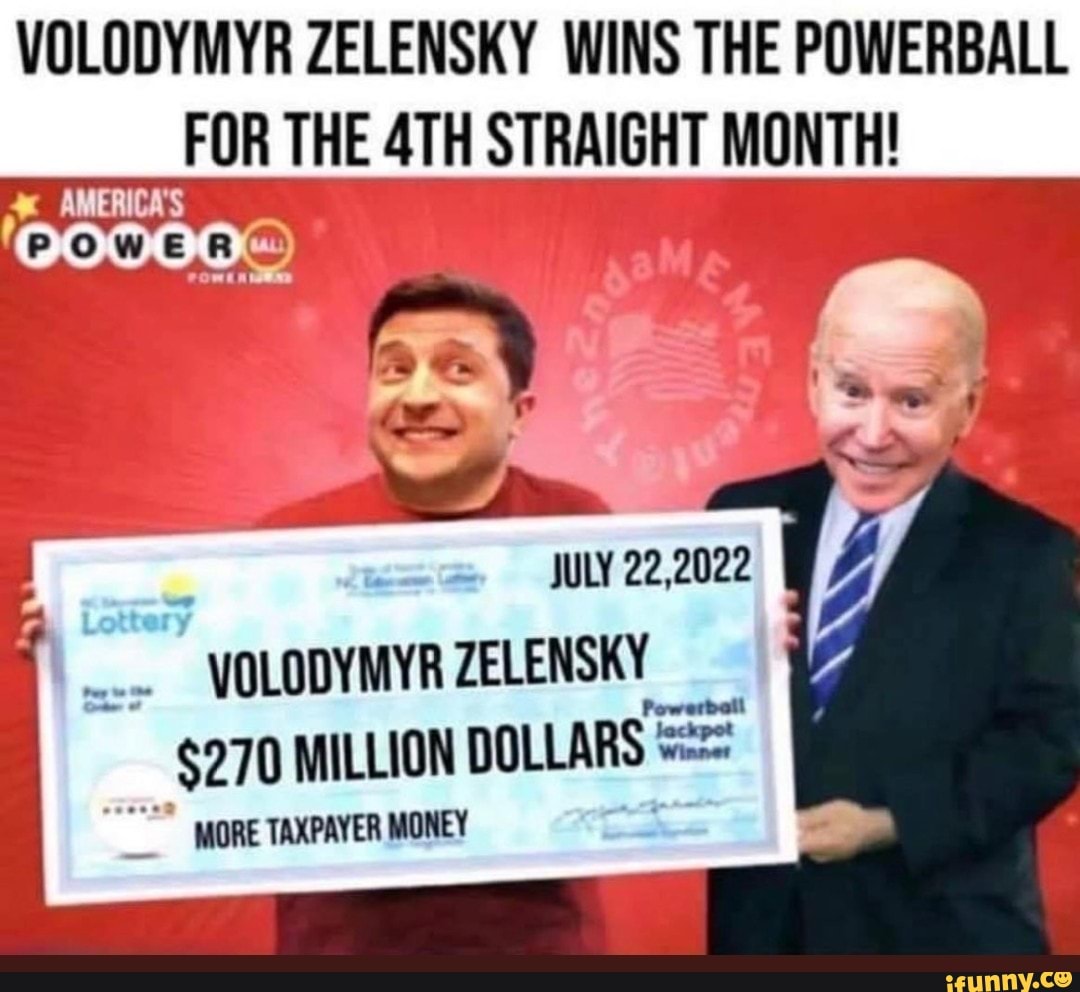 It_is_my_time said:
Let the anger flow through you...