Not a good effort, joeclyde.
J

Basically showing that there is nothing new under the sun. Men have been dealing with these issues for a while now.

Basically showing that there is nothing new under the sun. Men have been dealing with these issues for a while now.
Click to expand...

we also have been dealing with new users having trouble elaborating their first posts.

Gold Member
Quick analysis of the above clip (It is quite short).

Certain cultures (French, Italian) are deemed kinda alpha and sexy and this allows them to be far more forward when approaching a girl. Where as an Englishman can't as he is deemed beta and that would be "creepy". He doesn't use the words Alpha/Beta or creepy, that is just a comparative. It's the same as talking about nice guys (betas) vs self assured confident guys (alpha).

He discusses a type of game which he calls "poppet seduction" It is intact classic fame game where he discreetly says he doesn't have to say do anything and the girls will come. He said it is something common among his circles (Rock stars, actors and other famous figures).

He also talks about it being a shame that girls didn't dress as modestly as they did 10 or so years prior and he didn't agree with that.

Gold Member
Ethan Hunt, are you sure he didn't say "pop-art seduction"? I know his thick accent makes it a bit hard to understand what he says at times.

There was an article on Breitbart a while back, it talked about how Michael Caine dismissed the idea of a gender wage gap in Hollywood. I've always thought Michael Caine was a great actor, but the fact he's willing to speak his mind and not kowtow to leftist Tinseltown groupthink is admirable.

Veteran actor Sir Michael Caine has weighed in on the so-called gender pay gap in Hollywood, explaining that the idea that female actresses earn less than their male counterparts for the same work is, in his view, “rubbish.”
“It’s rubbish. I worked with Elizabeth Taylor and she got 10 times more than I did — and that was over 30 years ago,” Caine said in an interview with the UK Mirror.

“I don’t agree about the pay gap because she got a lot more money than me,” Caine added.

The two-time Oscar-winning actor’s comments come as a debate rages across Hollywood about sexism and unfair compensation practices in the entertainment business.

The conversation began in earnest in October 2015, when actress Jennifer Lawrence penned an essay entitled, “Why Do I Make Less Than My Male Co-Stars?”

In the essay, Lawrence — who earned more than $50 million last year — wrote that she had been paid far less than her A-list co-stars on the hit 2013 film American Hustle: “When the Sony hack happened and I found out how much less I was being paid than the lucky people with d*cks, I didn’t get mad at Sony. I got mad at myself,” Lawrence wrote.

The essay drew wide praise across Hollywood and media, and even earned commendation from Hillary Clinton.

In the months since, actresses including Emma Watson and Salma Hayek have called attention to the gender pay gap.

“To every woman who gave birth to every taxpayer and citizen of this nation, we have fought for everybody’s equal rights. It is our time to have wage equality once and for all, and equal rights for women in the United States of America,” Arquette said.

Caine, 83, has made headlines in recent months for speaking freely on a number of controversial topics. In January, the actor said he supported Britain leaving the European Union, while later that month, he told supporters of the #OscarsSoWhite protest to “be patient” in their quest to earn an Academy Award.

In May, Caine told the Telegraph that today’s actors are only in it for the fame, and most “can’t really act.”

Caine even supported Brexit! In light of this, I think he needs to drop the "Sir" title and just start going by Based Michael Caine.
H

Gold Member
Those pictures of him youg and suited up from the 60's are an absolute paragon of style.

Gold Member
I loved this brief honest blurb by Sir Caine. As I do most unfiltered opinions and musings from prolific figures of yesteryear. Back in a time where you didn't get lambasted on Twitter for saying something that made people uncomfortable and have to go on blast with some forced disingenuous public apology to quiet the masses down who want to ruin your way of life for hurting their feelings.

Not to change topics here, but I'm curious how the "wage gap" argument in Hollywood is quantified. Are these people that stupid to know that you can't compare apples to oranges? If you take two CPA Accountants, both having 10 years of professional experience working for similar firms then you can make a salary comparison if one is female and one is male their pay should be about the same barring any extra circumstances like one of them arguing for a raise while the other didn't etc.

With entertainers, their pay is just about 100% based on how much money the film can make with them in it. If JLaw bitches about making less than Bradley Cooper, well look at the numbers and see if it's justified. Is she a more experienced actor than him? Do her movies make as much or more money than his? Above all that, does her agent suck ass at negotiating her pay?

What's even more pathetic is how Bradley Cooper went all white knight and agreed to share his salary information with his female co-stars before his films go into production, in order to help them negotiate their pay. We even have a thread about it on RVF: https://www.rooshvforum.com/thread-51089.html

Generally, sharing salary information with co-workers is frowned upon in any profession. If Cooper has gone on record saying he'll do this, it would be hilarious to see it blow up in his face should studios start deciding not to cast him.

As for Jennifer Lawrence, she made $50 million the year before the article I linked to was published...why the fuck is she even bitching about pay? She makes more than the majority of men in ANY field, including acting. To complain about not being paid more than A-List guys who have been around for decades and are much bigger box office draws, as you mentioned, is just flat-out fucking ridiculous. She's only been acting since 2006!

LeoneVolpe said:
As for Jennifer Lawrence, she made $50 million the year before the article I linked to was published...why the fuck is she even bitching about pay?
Click to expand...

This is the same sort of argument modern third-wave feminists make when they whine about how "only 4.6% of fortune 500 CEOs are female"

Who ever would have imagined that women fighting for the equal right to vote in public election and hold legal contract would snowball into them bitching that there aren't enough billionaire female corporate moguls. How is that something you can even justify?

So-fucking-what? Only 8.1% of vocational nurses are men. Should we address the lop-sided employment statistic in nursing? Why no complaints about how there aren't more male exotic dancers and adult film actors? There is a gross disparity in female:male pay in adult film.

This is exactly how leftards are bitching about how Hilary losing the presidential election is somehow regressive. Like "Oh we thought it was going to be a step forward for America, showing all the young women of America that they can be president someday too."

Ever think for a second maybe that bitch just sucked and lost fair and square because the majority of America thought she was a crooked crony who was not fit to run the country? Maybe no one is sexist. Maybe the DNC just picked an awful candidate to represent their party this time around.

But no. It has to be because she is a woman.

Contrary to popular belief among the ignorant, being a CEO of a large company is not glamorous. It's stressful, you work a lot, you have to make often times very difficult decisions, and much like being a politician it is part of every minute of your every day life and effects your family and every facet of your being. It's not easy work where you just sit in a nice chair in a nice office and count your money. There aren't many female CEO's for the same reason their aren't many female King Crab fishermen: it's hard fucking work.

Off topic, but what do you all think his best movie is? You gotta love Dirty Rotten Scoundrels!

Gold Member
I love 'Alfie', he effortlessly plays the casual cheeky caddish rogue, charming the pants off lovely ladies in Lahndahn Tahn!
And what about that blue suit, would love one of those in that exact colour and cut.

Ipcress File, Funeral In Berlin, and The Man Who Would Be King

Ethan Hunt said:
He discusses a type of game which he calls "poppet seduction" It is intact classic fame game where he discreetly says he doesn't have to say do anything and the girls will come. He said it is something common among his circles (Rock stars, actors and other famous figures).
Click to expand...

Some of them may even have allowed Mr. Caine to grab them by the pussy.

TooFineAPoint said:
Ipcress File, Funeral In Berlin, and The Man Who Would Be King

Me too. He's the real deal; saw combat duty in the Korean War.

Billion Dollar Brain is a fun 60s flick too. Francoise Dorleac (RIP), the older sister of Catherine Deneuve was so hot in it.

I've never seen Funeral In Berlin; it's the only Harry Palmer flick I haven't seen.

Gold Member
Alfie is a great film, I refuse to see the recent remake.

"If a Frenchman comes up and asks a girl if she wants to get laid that's romantic but if an Englishman does it she says what do you think I'm a prostitute"
-Well how do you do?
"Well I certainly never ask..."

Love Sir Michael. Here he is with his Miss World contestant wife: 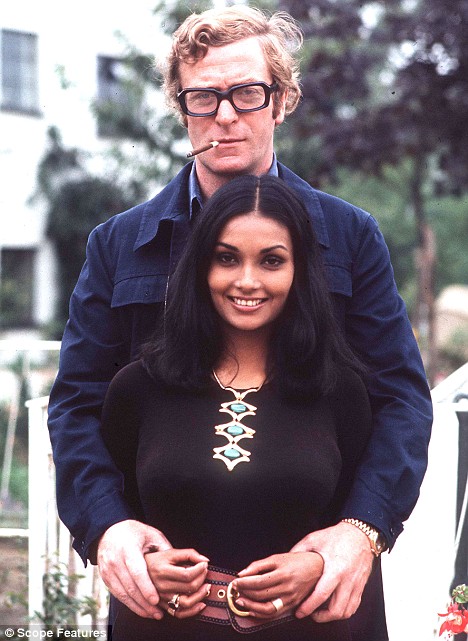 He famously began acting because the acting classes were chock full of babes and he wanted a lay.

TooFineAPoint said:
Ipcress File, Funeral In Berlin, and The Man Who Would Be King

Excellent film that one.
S

Red_Pillage said:
Off topic, but what do you all think his best movie is? You gotta love Dirty Rotten Scoundrels!
Click to expand...

Mine is his breakout movie 'Zulu', although his character isn't the main focus of the film.
Good find is that clip from the OP.
Share:
Twitter Email Share Link
Top