Gold Member
I can't think of a more honest Congressman than Cynthia McKinney, the only thing she has in common with Maxine or AOC is her minority status. On the first day she started at Congress, she was asked to sign an oath of loyalty to Israel, which she turned down, and was targeted ever since. She's a true patriot and a rarity as an honest, competent (USC BA and Tufts U PhD) and outspoken politician.

They made a documentary about her:

American Blackout (2006) is a documentary film directed by Ian Inaba. It premiered at the 2006 Sundance Film Festival. The film chronicles the 2002 defeat, and 2004 reelection, of Congresswoman Cynthia McKinney to the U.S. House of Representatives; it also discusses issues surrounding alleged voter disenfranchisement and the use of voting machines in both the 2000 and 2004 presidential elections.
Click to expand...

Orthodox Inquirer
Cynthia McKinney is incredible. I used to follow her on twitter. I dont even look at twitter anymore since they took all the important voices off it.

I was a leftist up until around the time they silenced her and forced her out of office. Back then a leftist meant you stood up for the little guy, liked the environment, and wanted government to provide better quality education and health care. There has been no progressive movement (or conservative movement) in this country since then. It's all just corporate globohomo wars for israel nonstop.

Seems like the Army is going to solve this problem with sheer force.

Disclaimer: some of the info in the tweets might be incorrect

Protestant
@DanielH turned out right after all. Massive violence in all major cities right now

Yesterday 26 protestors were shot dead by the police. More than 100 were wounded. Army units are very visible as well

Protestors have returned to the streets today. I wonder how much Soros pays. The Myanmarese Army is known to be straight up savage. They've been engaged in countless guerillas across the nation and have a reputation for their excellent jungle warfare tactics and their nastyness (engaging in ethnic cleansing etc.)

I am getting very strong Sisi/Egypt/Muslim Brotherhood vibes here. They are not going to stop shooting until the fifth column elements are rooted out or back in line

Big if true. The massive crackdown started on Sunday. Could it be that Beijing gave the OK nod?

Like I stated before, they will keep shooting until people start behaving again and globalists back off.


Military aircraft in a show of force over the protestors.

Ken Roth creaming over the violence. He's right about one thing though, Sorosites do have a habit of using the young and gullible for their sick powerplays

The Sorosite character of these protests is becoming clearer by the day. The Twitter user below does a great job at pointing out the level of organistation (here and elsewhere) the discrepancies, the use of the English language and their media savyness.

Banned
How much penetration is this coup/protest stuff making in mainstream media (that being NYT or, like, Alissa Milano or whoever else's twitter)? Personally, I'm not hearing much about it, and when I do it's usually eyerolling about "here comes the US state department with muh freedom and muh burmese tr00ns", but obviously I (like everyone) have a bias in what media and sentiment will come into my life.

That said, I really don't feel like this thing is getting much traction. In the west people are still mostly thinking about lockdowns and Joe Biden and whatnot, if their hope is to win this in the court of public opinion I don't think they're doing so hot right now, there's a limited amount of attention social media and traditional consensus makers can access and it seems like shitlibs just aren't really biting on this bait.

I am seeing parallels with Syria, which especially in the first years of the conflict, was one big psy-op.

However, it is a very effective tactic in the sense that it

1. Sets the narrative wherein ever other event or occurance will (not can) now be framed.
2. Destabilises the country that had the audacity to go against the globalist NWO. It intimidates nationalist leaders+supporters worldwide
3. Creates deep political division within a country that can at any point be tapped into
4. In the case of Myanmar I'd like to add that it's a volatile and fragile state with decades of ethnic conflict. If these protests continue and the Military doesn't give in the Sorosites might spur seperatism (Kachin, Karen Mon etc.)and religious fanatisism (muslims in Rakhine) to de facto permanently breakup the country

*Heavy sanctions will no doubt come

Taking from this and the Evo Morales situation, it seems the only way to stop these color revolutions is by having a based military

Globohomo may be able to buy politicians, judges, think tanks, bureaucrats and even intelligence agencies

But in the coup's last stage hard power is King: military, popular mass and police in that order

Defense: What the president calls "my military" is being cleansed of any officer suspected of disloyalty to or disagreement with the administration on matters of policy or force structure, leaving... Read More

www.investors.com
this is what real 4D chess looks like
Last edited: March 9, 2021

La Águila Negra said:
It is to be remembered that Myanmar has a vital role in China's New Silk Road Project

*Heavy sanctions will no doubt come
Click to expand...

When the sanctions hit the reaction will probably be a collective shrug followed by “so what? We already have China as a trading partner”.

It looks at this juncture like the US deep state is getting their asses handed to them on this one (As is becoming increasingly frequent). Their tactics traditionally rely on economic extortion coupled with global moral shaming and Media controls. None of that works when you’re dealing with a regime you don’t have anything to offer economically (because, as you said they’re a key China partner) and nobody gives enough of a crap to play nice with the sponsored propaganda and protests.

It said the George Soros-founded organization is suspected of giving financial support to the civil disobedience movement.
www.irrawaddy.com

It said the George Soros-founded organization is suspected of giving financial support to the civil disobedience movement.
www.irrawaddy.com
Click to expand...

When some liberal reformer political puppet meets Soros, this is when you know what to expect. Every. Single. Time. 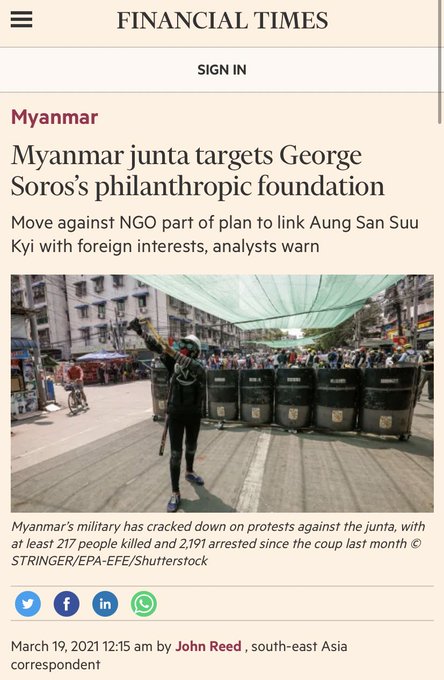 The Global New Light of Myanmar newspaper, which has been for years a mouthpiece of the military, said the Open Society Myanmar (OSM) organisation transferred funds without seeking permission from the Foreign Exchange Management Department.

The group then exchanged $1.4 million into Myanmar's kyat currency "without following the necessary rules and regulations", the paper said.

It then suggested that unidentified non-governmental organisations were "providing cash assistance to CDM movements".

The paper said the finance officer of Open Society Myanmar, Phyu Pa Pa Thaw, had been interrogated since last Friday about "that cash flow into the CDM movement".

Authorities were looking for 11 other OSM employees to interrogate them, it added.

On its website, the Open Society Foundations says it is the world’s largest private funder of independent groups working for justice, democratic governance, and human rights.

It provides grants through a network of national and regional foundations and offices, funding an array of projects.

Authoritarian governments regularly attack Soros and his organisation for its work, and he has been the target of conspiracy theories and social media misinformation for years.

The newspaper published a picture of Suu Kyi meeting Soros in 2016 in New York and of her meeting his son, Alexander Soros, in Myanmar, but it did not link Suu Kyi or the Open Society Foundations to any alleged irregular transfer of funds.
Click to expand... 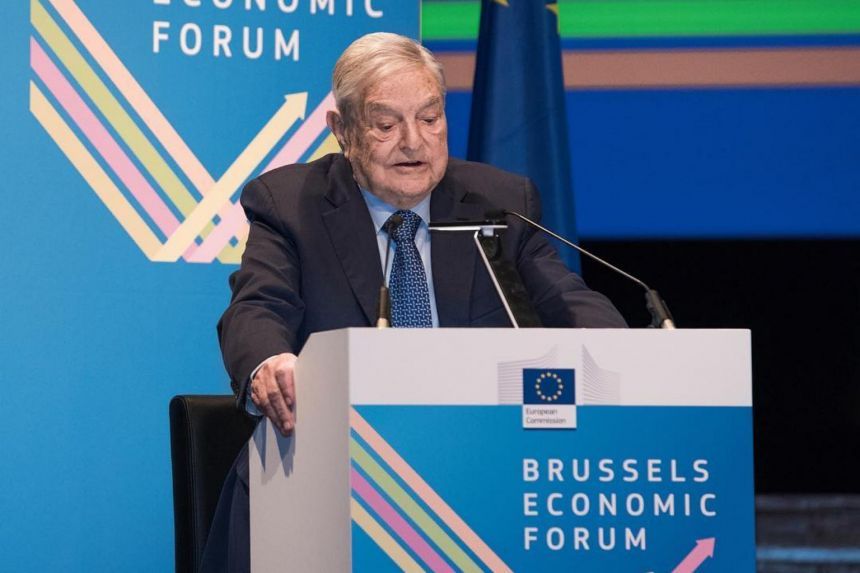 Myanmar's military has charged the international envoy of the country's ousted government with treason, according to an announcement on Tuesday on army-run television.

These guys are good. They’re chopping off the cabal’s ability to organize methodically.

Protestant
With friends and neighbours like these I think we can now conclude that the Soros counterrevolution isn't going anywhere.

Protestant
Update on Myanmar. The protests/riots are still ongoing and the total death toll is about 700 now

A new development is the anti-China character of some of the riots. There is also a lot of renewed fighting in some of the minority areas (most notably the Kachin and Shan people)

In the video below two classical lefties, Max Blumenthal and Ben Norton (who have some good points at times) discuss the possibility of Myanmar turning into Syria/Libya

A couple of months ago I already mentioned this possibility. The only difference is the lack of media attention - which is in my opinion mostly due to the fact that they won't need to massage the Western public opinion towards military intervention

La Águila Negra said:
Update on Myanmar. The protests/riots are still ongoing and the total death toll is about 700 now

A new development is the anti-China character of some of the riots. There is also a lot of renewed fighting in some of the minority areas (most notably the Kachin and Shan people)

In the video below two classical lefties, Max Blumenthal and Ben Norton (who have some good points at times) discuss the possibility of Myanmar turning into Syria/Libya

A couple of months ago I already mentioned this possibility. The only difference is the lack of media attention - which is in my opinion mostly due to the fact that they won't need to massage the Western public opinion towards military intervention

I don't think it will go as far as the level and chaos that Syria and Libya have gone and are going through.

Myanmar is far away from the geopolitical control area of (((USA and the West))) and military control is stronger in Myanmar.

Plus, they are mostly dealing with Russia now, which is basically surrounded by NATO bases.

Multi ethnic countries don't function and Myanmar is multi ethnic to a degree.

Protestant
US journalist Bryan Fenster, or should I say (((Fenster))) has been sentenced to 11 years in prison by the Myanmarese court under the Counterterrorism Act. He was found guilty on charges related to treason and sedition.
He still faces the prospect of life in prison.

Fenster was the director of the online magazin Frontier Myanmar which is almost certainly connected to the National Endowment for Democracy, a CIA front that works to subvert, destabilize and if necessary rip apart South East Asian countries that get too close to China. 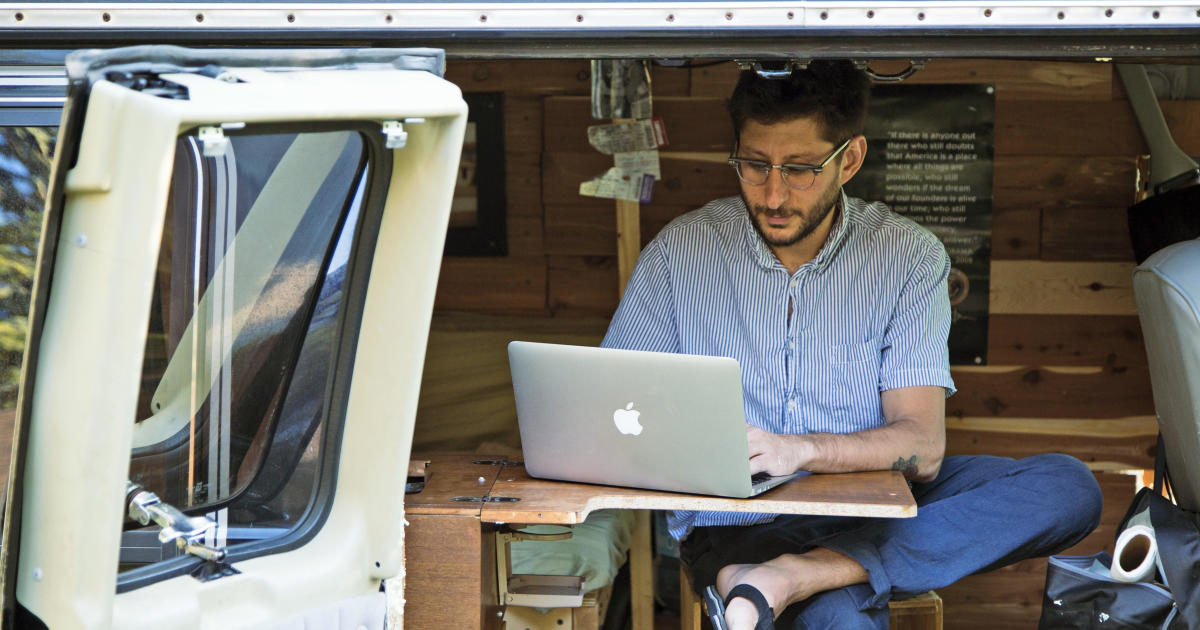 Myanmar court sentences U.S. journalist Danny Fenster to 11 years — and he could still get a life term

He was convicted of charges including incitement and faces other charges that could bring a life sentence. Fenster is the only foreign journalist convicted of a serious crime since a military coup in May.

Myanmar has, as predicted by the Grayzone, entered a civil war

Other Christian
Gold Member
It's all theater. China is NWO too, just like the US. I've suspected thus for a long time but covid proves it.