Michael, a longtime resident of Gilroy, passed away on November 1, 2021. Never a kinder more gentle man did I know than my husband, Michael.

For those who knew Mike, you know that he was a good and honest man. He was kind, considerate, and always polite.

Mike was adamant that people know what happened to him that caused his early and unexpected death.

“Many nurses and non-nursing staff begged me and my wife to get the truth out to the public about the Covid-19 vaccines because the truth of deaths from the vaccine was being hidden within the medical profession. I promised I would get the message out. So, here is my message: I was afraid of getting the vaccine for fear that I might die. At the insistence of my doctor, I gave in to pressure to get vaccinated. On August 17th I received the Moderna vaccine and starting feeling ill three days later. I never recovered but continued to get worse. I developed multisystem inflammation and multisystem failure that medical professionals could not stop. My muscles disappeared as if to disintegrate. I was in ICU for several weeks and stabbed with needles up to 24 times a day for those several weeks, while also receiving 6 or 7 IVs at the same time (continuously). It was constant torture that I cannot describe. I was no longer treated as a human with feelings and a life. I was nothing more than a covid vaccine human guinea pig and the doctors excited to participate in my fascinating progression unto death. If you want to know more, please ask my wife. I wished I would have never gotten vaccinated. If you are not vaccinated, don’t do it unless you are ready to suffer and die.”

Mike did not deserve the pain and suffering he endured. He was a good man and deserved better.

Mike was born in San Jose, California and moved to Gilroy at age one, where he resided for the last 55 years.

Mike was an intelligent man but never flaunted it. Mike chose to clothe himself in humility, kindness and gentleness every day, and preferred to work quietly behind the scenes doing good deeds and expecting nothing in return.

Michael could be seen twice daily walking his Golden Retriever around the neighborhood or up at Gavilan College for the last 20+ years in his jeans, t-shirt and hat.

Michael was proud to be a gear-head, a true car restoration enthusiast and tinkerer.

Mike loved spending time with his wife, his dog, his cars and playing the drums as he was quite a gifted musician.

Michael was preceded in death by his brothers Anthony Edward Granata and Salvatore Anthony Granata.

Wow. How terribly sad. Thanks for posting.

I’ve seen a few obituaries in my local newspaper that also listed the vaccine as cause of death/illness and I will try to locate to post here. I hope others will contribute to this thread as well. 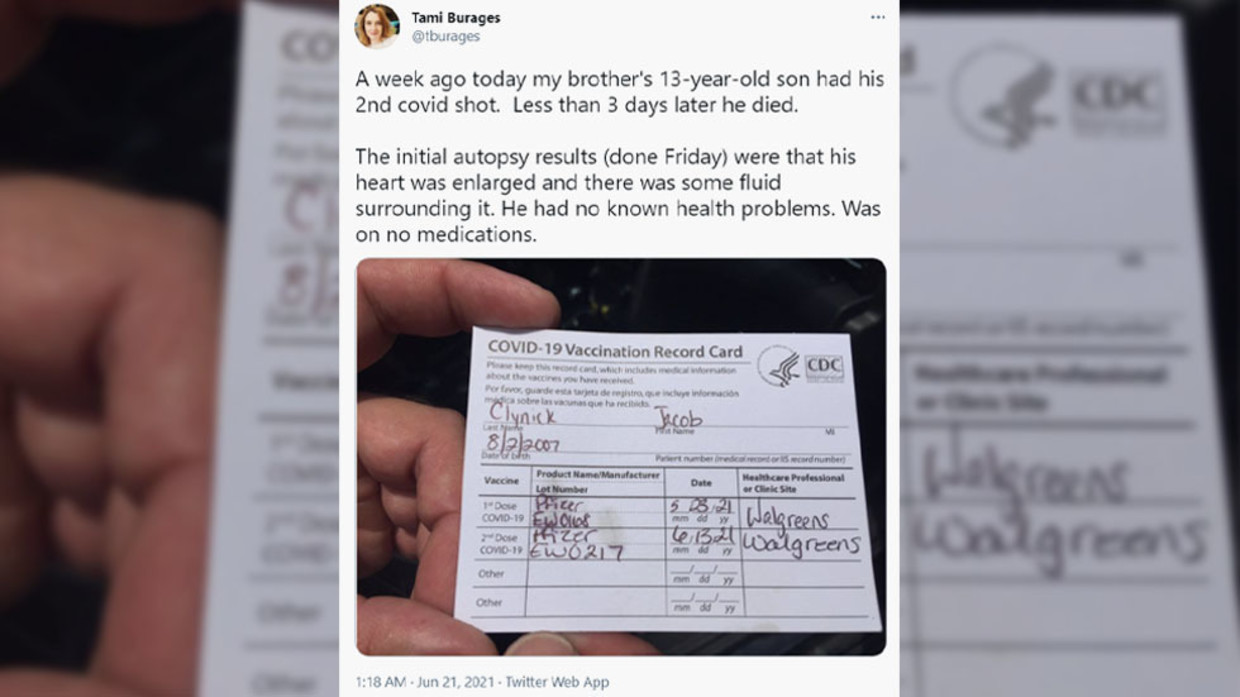 From RT.com.... A 13-year-old boy allegedly died from heart problems after getting his second dose of Pfizer’s Covid-19 vaccine, according to a viral Twitter post, as health officials begin to link cases of heart inflammation in

Non-Christian
An old friend of mine in his early sixties, strong as a bull and a gentleman. Last year I worked with him on the construction site, I could hardly keep up with him although he's a decade+ older. Died while driving his car, just few meters away from reaching his home. Unbelievable!

Don't know if he was jabbed or not but it sounds like the heart stopped. He had no previous medical conditions whatsoever.