Peter Singer is an Australian moral philosopher who has influenced Bill Gates (check out his Wikipedia page).

He has advocated a moral philosophy called "esoteric morality", which claims that it is "good" to do some things in secret which would not be "good" to do or advocate openly. See his paper "Secrecy in Consequentialism: A Defence of Esoteric Morality" if you want all the details of this.

He is also respected by the likes of Richard Dawkins, who says he is one of the "most moral people in the world". Check out this interview, in which Singer says that disabled people should be killed, which Richard Dawkins says is "completely logically consistent".

What do you know about him? Seems like he is a major intellectual influence on the global elite. He gives them a pseudo-philosophical foundation for justifying de-population.

He wrote one of the seminal animal rights texts in the 1970s, is associated with the transhumanism and effective altruism movements, etc. A utilitarian hedonist, I believe he'd call himself, that is modeling the world as a simple equation where "happiness" is the goal, measured like points in a video game, and whatever course of action leads to the overall highest score is the right thing to do.

At a base level, it's an okay enough model. If someone has two scoops of ice cream, they can give one away, which might make them a little less happy since they're consooooooming less sweets, but will make the recipient who went from 0 to 1 scoops much happier, so the overall happiness quotient increased.

But it's a bit simplistic, obviously. Would keeping 99% of the population on a morphine drip increase the world's happiness? You could argue that case. I would not call that a life worth living, though. My conception of a meaningful life is a lot bigger than maximizing leisure and consumption.

I actually had dinner with this guy twice like 15 years ago, with a group of a dozen or so people, at an animal rights conference. I won't say too much more to avoid doxxing myself. He was a nice and funny guy in person, but his ideology is very simplistic, and managing life itself as though it were just numbers in a spreadsheet is, besides not being possible, inevitably going to degenerate into.... sorta what we're living today.

He's not even the craziest of them, either. He's friends with a guy named David Pearce, who's just completely untethered from reality. He suggests using gene editing and other such technologies to turn wild predators like coyotes or sharks into herbivores who are fed kibble, that way even "wild" animals aren't spared from the nonsense of the managerial class playing god. Given the power to do so, this man would take action that would almost certainly end up killing every living thing on the planet.

Expect people like this to become more powerful and influential over the next decade, especially younger, attractive, media-savvy ones.

He's yet another one of those socially retarded jews whose views are so repugnant that they would only ever gain traction in academia.

He spoke at my communist law school and the place was absolutely packed. He's an atheist who has tried to conceive of a morality outside of God, and has failed absolutely. I remember reading through the first half of one of his books and just stopping because it was so stupidly absurd. 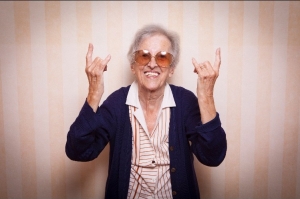