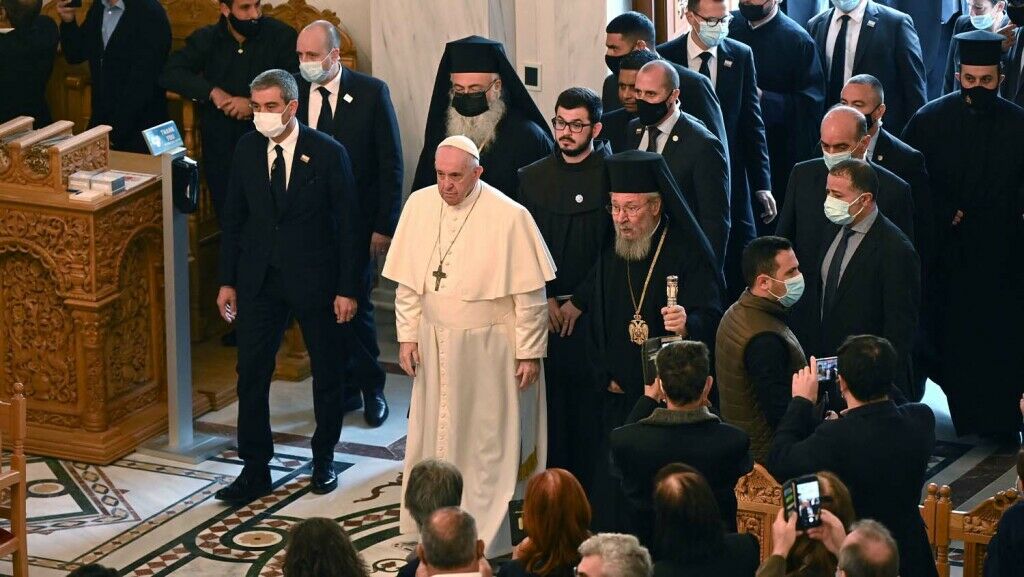 Pope Preparing for a Catholic-Orthodox Reunion

Can the pope bring Rome and Constantinople together again?
www.thetrumpet.com

The pope gave another vague statement apologizing for crimes Catholics committed against Orthodox Christians: “Shamefully, patriarch—I acknowledge this for the Catholic Church—actions and decisions that had little or nothing to do with Jesus and the gospel, but were instead marked by a thirst for advantage and power, gravely weakened our communion.” (As a side note, the pope got Ieronymos’s rank wrong. He is an archbishop, not a patriarch.)

The Roman Catholic archbishop of Athens, Theodoros Kontidis, said the pope’s visit was a moment to remember the unity of Christians, “especially between Catholics and Orthodox.” “We are the same faith with the same traditions,” he said. “We have to try again and again and never give up.”

Not everybody was happy with the pope’s visit. An Orthodox priest catching sight of Francis shouted at him, “Pope, you are a heretic!” The Greek Holy Synod also didn’t welcome the pope as warmly as its Cypriot counterpart did.
Click to expand...

To convert to Orthodoxy individuals must identify and renounce heresies.
All descriptions can be found here from Saint Andrew Orthodox Church Catechumen - an example.
Here are only a few: 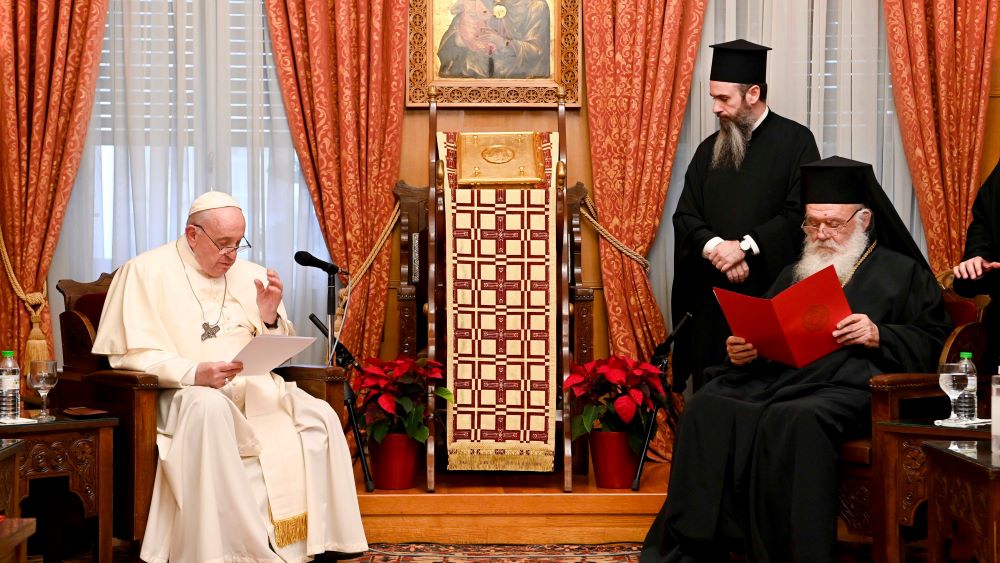 Pope Francis’s Ecumenism Is Not Working in Greece

Some accorded a cold welcome to the Roman pontiff in Greece, some 20 years after Pope John Paul II's historic first visit to the country in 2001.

The request for forgiveness, made by Pope Francis, on December 4, 2021, in the presence of the leader of the Greek Orthodox, Hieronymos II, is part of the ecumenical process as the Holy See sees it: “Shamefully, patriarch – I acknowledge this for the Catholic Church – actions and decisions that had little or nothing to do with Jesus and the Gospel, but … gravely weakened our communion. In this way, we let fruitfulness be compromised by division.”
Click to expand...

Orthodoxy is the Absolute Truth

Yesterday the pope met with Metropolitan Hilarion of Volokolamsk, head of the External Church Relations Department of the Moscow Patriarchate, for a private conversation at the Vatican.

According to a Vatican statement, during the nearly hour-long conversation the two discussed several issues “that are a cause of common concern and of which the commitment to seek concrete human and spiritual answers is shared.”

Ever since the Great Schism of 1054 the Catholic and Orthodox Churches have been split and remain divided over a host of issues, including the primacy of the pope, and accusations from the Russian Orthodox that believers in former Soviet nations are converting as a result of Catholic proselytization.
Click to expand...

Orthodox Inquirer
Gold Member
Was is St. Paisios who said that close to the 'end' the Roman Catholic will merge with the Orthodox? Someone referenced it on this forum.
P

Orthodox
Pope Francis and Patriarch Kirill met in Cuba in 2016. Quoting from the article: " 'In Cuba there was an urgency for the Middle East, now it depends on many other factors,' he said, and offered no further details, but reiterated Kirill’s desire to meet Pope Francis again."

Later from the article:

If the pope meets with Kirill next year as is hoped, it will signal another important step in the broader efforts to improve Catholic-Orthodox relations and it will also provide a further opportunity for the two to both reinforce common priorities and discuss sensitive issues, such as the conflict in Ukraine.
According to Archbishop Sviatoslav Shevchuk, head of the Ukrainian Greek Catholic Church, ecclesial authorities in Ukraine are also working to organize a papal visit to their country in 2022, which could signal a significant hiccup in terms of the pope’s efforts to woo the Russian Orthodox Church.
While Pope Francis has long insisted that common acts of prayer and works of charity are the best way to proceed forward, he has also consistently spoken out about the conflict in eastern Ukraine, which was a sore spot between he and Kirill in 2016 and will likely be again if the two meet again next year, especially if a papal trip to Ukraine is on the calendar.
Earlier this month Pope Francis during a Sunday Angelus address offered prayers for Ukraine and advocated for dialogue instead of weapons after Russia amassed tens of thousands of troops along its border with Ukraine.
Francis didn’t mention Russia by name in his address, but his intention seemed clear as he called for international dialogue to defuse fresh upheaval in the years-long crisis, offering prayers for “dear Ukraine, for all its churches and religious communities and all of its people,” and voicing hope that “tensions would be resolved through serious international dialogue and not through arms.”
Whenever and wherever Pope Francis and Kirill meet, it will undoubtedly be an important step forward for the two churches, but current events are also a reminder that despite the significant progress being made, there is still a lot to navigate.


A predicate to the 2016 Cuba meeting was "urgency for the Middle East." Interesting. Now, it appears the predicate for such next meeting may be "the conflict in Ukraine."

May these two men be moved solely by God's hand, free of evil or earthly forces.

Orthodox
In my humble opinion, I think that a blatant reunion would be too scandalous and even the boomer Greek-Americans might get shocked. It’s more likely to me that they would do some sneaky ambiguous policy that can be interpreted in multiple ways, like conditional intercommunion or maybe a zero-chrismation policy for people who are converting.

Woman
Orthodox
There's a cycle where this gets brought up again and flares back down.

Mountaineer said:
Was is St. Paisios who said that close to the 'end' the Roman Catholic will merge with the Orthodox?
Click to expand...

An event will occur, prior to the Second Coming, that will "shake the nations."

It is reported that the pope desired to meet both Paisios and Porphyrios at the Vatican. I applaud them for rejecting him. Without communicating with each other but guided by the Holy Spirit, they said: “No, we cannot go, because Roman Catholic Church and the pope continues to demonstrate egotism and not only do they want to subjugate us to Papism – a delusion – but they won’t repent. We will help the situation better by our prayers.” Good for them. When did a Pope speak up for Orthodoxy?
History records: 13 holy martyrs were killed by order of the Vatican.
Click to expand...

nagareboshi said:
In my humble opinion, I think that a blatant reunion would be too scandalous and even the boomer Greek-Americans might get shocked. It’s more likely to me that they would do some sneaky ambiguous policy that can be interpreted in multiple ways, like conditional intercommunion or maybe a zero-chrismation policy for people who are converting.
Click to expand...

I agree, and due to the nature of Orthodoxy, we are the only ones that would have to compromise our beliefs for a full-blown reunion since the Catholics are fine with theological differences* as long as there is political unity. True reunion from an Orthodox or trad-cath perspective is impossible without one side completely changing its dogmas.

Also what you're saying (potential conditional intercommunion) sounds plausible, since Archbishop Elpidophoros has advocated for non-Orthodox spouses to receive communion without becoming Orthodox, which is just a completely insane notion.

Orthodox Inquirer
Gold Member
I believe Jay Dyer talked about this issue and the goal is creating one world religion. I wish I remembered which podcast it was. Francis still haven't repented so I wouldn't trust his intentions to be pure.
Last edited: December 30, 2021

@DanielH thank you for the article share in the following forum by @rouchno1fan . It helps to receive a general idea on how to formally start the path/process. Great example visually.

The journey from Catechumen to Baptised?

The shared article is inspiring and well written by Archpriest Josiah Trenham, Ph.D. Appreciate the writing style too.

How to Become an Orthodox Christian
By Archpriest Josiah Trenham, Ph.D.
The Conversion of the Nations is the Mission of the Church PDF
Click to expand...

Banned
Catholic
"Orthodoxy" is not orthodox at all but in reality is heterodoxy.

Mountaineer said:
I believe Jay Dyer talked about this issue and the goal is creating one world religion. I wish I remembered which podcast it was. Francis still haven't repented so I wouldn't trust his intentions to be pure.
Click to expand...

It's a pretty old NWO/Masonic thing

KiwiCatholic said:
"Orthodoxy" is not orthodox at all but in reality is heterodoxy.
Click to expand...

Can you explain that or at least post a source?

Mountaineer said:
Francis still haven't repented so I wouldn't trust his intentions to be pure.
Click to expand...

Agree.
On another note about Francis: 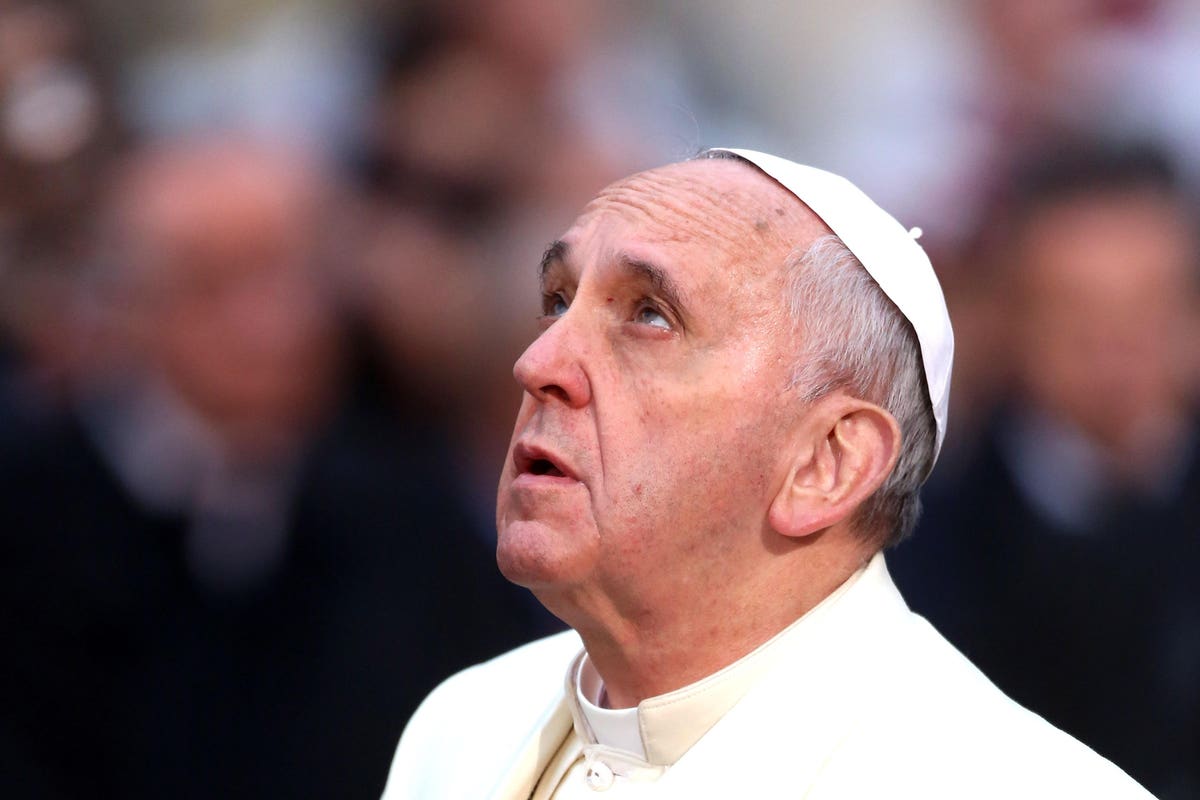 Users on Twitter also were quick to address the fact that Pope Francis has no children.

Not even Pope Francis, who has been seen as a much needed reformer by many Catholics, is above backlash on social media. He came under fire on Wednesday after he suggested that couples who have pets instead of children are selfish, and further warned that the decision to forgo parenthood could lead to a loss of humanity and could even be a detriment to civilization, CNN reported.

"We see that people do not want to have children, or just one and no more. And many, many couples do not have children because they do not want to, or they have just one — but they have two dogs, two cats ... Yes, dogs and cats take the place of children," the Pope said. "Yes, it's funny, I understand, but it is the reality. And this denial of fatherhood or motherhood diminishes us, it takes away our humanity. And in this way civilization becomes aged and without humanity, because it loses the richness of fatherhood and motherhood. And our homeland suffers, as it does not have children."

While the comments certainly echo the Catholic Church's teachings about the importance of couples bearing and raising children, the reaction was swift and loud on social media. Many users shared images of their pets and expressed their love for their animal friends, while others were quite blunt and direct on the matter.
Click to expand...

Orthodox Inquirer
Gold Member
Catholics are outside of The Church since 1054. V2 is not the only of their problems.
Last edited: January 11, 2022

Banned
Trad Catholic
@messaggera On your profile you publicly identify yourself as “Catholic”. That’s a bit deceptive on your part, no?
You must log in or register to reply here.
Share:
Twitter Email Share Link
Top