Predictions for the 2020s

HermeticAlly said:
RE: Prediction for the 20s

I can't imagine Africa ever becoming much of a game destination unless you're a black man fed up with African-American women. As far as I can tell, nobody else is interested in African women.

Here, I have a few more!

- China finds an excuse to annex Japan. Weak Japanese men offer little resistance, and Chinese men have Japanese women available as brides. This might seem far-fetched, but I won't be the slightest bit shocked if it eventually happens for these exact reasons.
- Mass starvation and chaos erupt in Africa due to genocide of white South Africans producing most of the food. African refuges attempt to pour into Europe and the Middle East. Middle East holds its ground and guns down African migrants, but Europe gets hit hard before they start sinking the ships. SJW pressure to save Africa exerts further strain on Western governments suffering from catastrophic demographic and internal issues.
- The developing world is hit hard by famine and issues with food production and water supply due to unsustainable population, but North America, Europe, and East Asia have infrastructure and resources that largely shield them from these issues.
Click to expand...

-Both China and Japan have rapidly declining populations. China's population is set to dip below 1 billion by the end of the century, dropping by 400-500 million. Japan's % drop is equally dramatic, as is S. Koreas. China is not looking to annex Japan, it seeks to integrate it into its economic sphere of influence, in which it is already falling along with Korea. They definitely want to absorb Taiwan completely though, sometimes in the 2030s-40s, they play the long game.

China will export some of its surplus males to SEA, Africa and the rest of the world.

-African agricultural production is set to boom, under the control of Chinese interests which are buying up underdevelopped prime agricultural land in Africa. African economies are set to stabilize and grow due to massive Chinese infrastructure investments and Chinese companies starting to outsource their work there as their own labor force becomes too expensive, Africa is becoming "China's China".

- Turmoil in the Western world induced by the globalists: this is the big widlcard, it can go either way, with race wars accelerating and more plandemics, or maybe the masses will be "inoculated" against future manipulations, we're at a crossroads.

La Águila Negra said:
Many black women are straight up hateful and vengeful out of jealousy.... there are 10 overweighted Laquesha's with a gap between their front teeth, a weird hairline, shitty hair genetics and manclaws... Many would date a white male within a heartbeat if they'd get the chance
Click to expand...

They better be quick, because with all that eating everything on the table and the table those hearts ain't got that many beats left in them.

Orthodox Inquirer
Couldn't find a thread with a longer time-line. 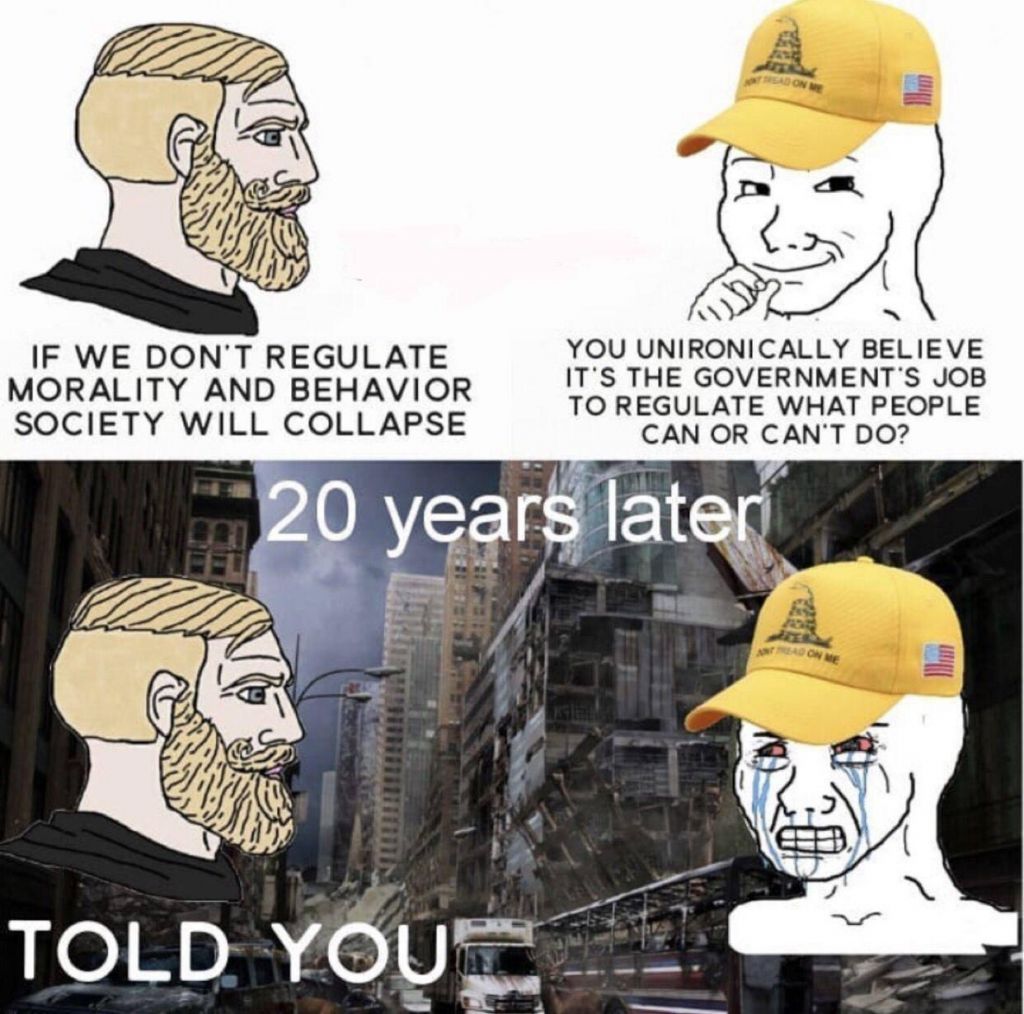 Orthodox Inquirer
This thread is a mixed bag.


Coja Petrus Uscan said:
1) The decline of techno-leftist centers - As Detroit used to be a major global center and center of the then high-tech auto industry, Silicon Valley will begin to falter due to decentralised competition and privacy concerns. BitChute, Telegram, Parler, DuckDuckGo are all growing at a rapid rate. I think this trend will take a few decades to lay out, but I suspect that major companies like Google will be supplanted as the top 10 and Facebook will go out of business or get swallowed up in it's decline.

Major leftist centers are unsustainable for the vast majority of people to live in now. It seems many are already shrinking. They will slowly burn out and be left low-trust, high crime, insanse super-majority left areas. They will be the new Balitomore and Detroits.
Click to expand...


Coja Petrus Uscan said:
2) The insane left is only just getting started - The universities have only recently got going as large-scale leftist factories and they are now in their early thirties, in an economy that is inherently tightening beyond control. You can see the likes of the New York Times hiring pasty, soy-based angry lefties, who are highly motivated by just wanting to mess things up who have something going for them; and that they can now dominate people by destroying the livelihoods of people they disagree with, with little push back. In the next 11 years there will be a few alt-left governments. They will be such a mess that they crash out with abysmal ratings after one term. However, most of their voters fail to realise the policies they are voting for are physically impossible.
Click to expand...


Coja Petrus Uscan said:
3) Our seeds sown will start to sprout - I think we will see a heightening of insane leftisism up to around 2030. The media, politicians, schools, universities, mega corporations, churches will all go further and further left. Increasingly dissenting voices will be silenced. But beneath this veneer seeds will be sown that start to take root in more minds as gradually more people are threatened by animal farm. I expect to see a small, but growing world of traditionalism; abstention from porn, films, TV, social media etc.; the god pill and so on. When the world starts to see what a mess these 40 year old SJWs are and when The West gets to grip with the fact that there will never be any real economic growth, more will turn to personal conservativism. By 2040 I expect insane leftism to be an obviously dead movement, just as 18th century liberalism died.
Click to expand...


Coja Petrus Uscan said:
4) The EU and the economy - Very difficult to know what will happen here, but as the economy worsens it will at least be pared back. I see another major financial crash coming in the next year or two. This will be unlike past crashes, which have been somewhat unexpected. This one will come with major central banks with interest rate at about zero. Trump is already pushing Powell to cut, because he wants to make sure the crash happens after the election. When this crash happens central banks won't be able to cut rates. They will have to go negative rates, which will mean any money you leave in the bank will have negative rates and beyond that they will have to print money. There will be a huge movement to the USD as the best house in a bad neighborhood. This will cause other currencies to weaken and the $20 trillion in overseas USD denominated debt to explode, ripping apart smaller economies and the likes of China and Turkey. The US still has a lot of play as the purveyor of the global reserve currency.

With Europe there is a good chance that the next crash will take out the Southern economies and possibly pull the Northern ones down. In particular Germany and France are very weak. France is at 56% government spending as percentage of GDP, secondly only in the world to Cuba, and people want even more government and lower taxes. They also have the second worst immigration situation after Sweden. A person is killed by Macron's goons about every ten days in the anti-govt. protests the media barely covers. Too busy with Russia. When the next crash hits the French government spending will eclipse Cuba and France will deteriorate quickly. Germany's main issue is its aging population full of renters and people without pensions. They will follow the route of Japan as a zombie economy, but surrounded by a whole host of problems Japan was smart enough not to give itself, like invaders.

If the central banks can paper over the next crash, by that point there really will be no tools left available and instead The Greatest Depression will unfold about 2030.
Click to expand...

2/10, right on some things for the wrong reason


Coja Petrus Uscan said:
5) Decline of the media - The media is already being propped up by dodgy billionaires. Their web traffic numbers are rigged to keep their dwindling advertising revenues. Their death will be slow, but sure. There will also be a dwindling in sports, films and TV revenues as a minority turn their back on degeneracy and leftist programming.
Click to expand...


Coja Petrus Uscan said:
6) The transgender fallout - This will take a bit longer to pan out, but will be very apparent by 2050 that one of the worst plays of the left in this era will be the promotion of transgender, the blocking of opposing narratives and the destruction of anyone who opposes it. An increasing minority of people will be encouraged into being a tranny, which appears to be based on feeling disaffected by your sex. The best thing to do is confront that, but the left will encourage them into mental illness and a life in which very few people will desire them None of these lefties will marry a tranny, though they might do an off-the-record session here and there. They are just pet victims. Trannies will be reared in pits of headonism and materialism as never seen before. There will be no stability in their life, no pension, no stable career, no reliable friends, no family, no community, no children, too much drugs, too much casual sex, too much life wasted on immediate pleasures. They will end up a bizarre homeless sideshow in decaying cities.
Click to expand...

Not enough runway for this yet.


Coja Petrus Uscan said:
7) Tech - Right now we are in a stagnant tech cycle. Most of the big tech of the last decade is for leisure and probably burns more wealth than it produces - streaming, video, VR, online gaming, social media, smart phone, prostitution tubs, IG hookers and other forms of new prostitution. As things get generally harder I expect a new cycle of innovation to start. And it will have nothing to do with going to Mars. Tesla will probably go broke.
Click to expand...


Coja Petrus Uscan said:
8) Israel - will be increasingly isolated. Left-wing parties will turn away from the Jew as they turn towards radical Islam.
Click to expand...

Cynllo said:
This thread is a mixed bag.

2/10, right on some things for the wrong reason

Not enough runway for this yet.

The disillusion with the dissolution of legacy media is that the alternative, social media and sites like Jewtube, is just as controlled or on the way to being so to a large extent as the legacy media. But at least, it provides space to some degree to voice another perspective, and also it gives people the chance to start things theirselves (however within the lines of what the Jewish social media bosses declare) so it has an active element instead of merely passively taking news and opinions in.

Orthodox
This one is very hard, since a lot of us had a hard time (and still do) predicting the next war and how hot it will be. I think this year or next is what really changes the trajectory of all things predicted in this thread, even really good ones so far.