Joachim-Gaius said:
You completely nailed it. The S&P500 is far more risky than the average person realizes it to be. 6 stocks represent approximately 25% of the S&P500's value (cap weighted) . . . one of which is Telsa with a P/E ratio that swings between 300 - 1200+. And yet S&P500 cap weighted funds make up a cornerstone of nearly every pension scheme in the world. But it is a psychological feat to not invest some of one's assets into such funds, as they have truly triumphed. Not certain what the answer is, but we do know that the temptation to manipulate public markets has proven to tempting for central banks to avoid.
Click to expand...

Correct. They really should rename it the S&P 6.
O

kurtybro said:
Most people putting huge percentages of their N/W are the youngsters who know it's their best Hail Mary hope of any future in the current environment.
Click to expand...

Yes, younger people, who're much less risk averse due to age/still got a lot of time to get back on their feet in case of devastating loss.


kurtybro said:
The only issue is that Bitcoin is still "hard" to operate, has a steep learning curve, and takes alot of research to drill down into exactly what it is and how it works under the hood and the philosophy behind it.
Click to expand...

Yes, this is very off-putting factor for an average person. (I have education in relevant engineering field).
Life is getting way too complicated and dependent on internet and electricity... digital money, digital ID, digital government services, next is digital loo and digital soup I guess.
Personally, would keep only 1-5% in bitcoin, as the other person mentioned.
Last edited: Sunday at 9:32 AM

cosine said:
Probably a lot of people in this thread think crypto is garbage. I used to think it was too, but Bitcoin is essentially nerds saying, "the government is not to be trusted with the money supply" and moving it to a decentralized system. Now I'd argue that the events of 2020 made bitcoin a reality. I now believe that it is stupid to own zero bitcoin. Allocating 1% to 5% in order to exit the government-controlled fiat system seems entirely worthwhile to me.

If anyone can seriously engage with Michael Saylor's key arguments for bitcoin and refute him, I'd love to be proven wrong, dump my bitcoin, and continue my real estate investments instead.
Click to expand...

I was a crypto moderate and have posted its down-sides in the BTC thread for years, but being long-term bullish on the space. The shift since 2020 has changed things, particularly my experience of nearly loosing most of my life savings due to the ever increasing centrally planned banking regulation; and further research into it. Their future is only digitally money, where the purpose of every transaction will be centrally stored. The KYC mountains are being used as weapons to get financial institutions and people to submit to streamlined total control-grid currencies. You won't be uploading scans of bills or bank statements, you will be giving permissions to your toploaded vaxx pass to have access to those things. For what's was going on a few years ago - https://crackedlabs.org/en/corporate-surveillance

Then with the new financial era that begun with the plandemic, economies can no longer exist without the money printer. The up side of that is if you have been heavily in stocks for years, you are fluffed and will be fluffed until it crashes. But for those who don't have stocks, there is no easy entry point. On top of that, we know fiat is now going down. I saw a video with Saylor, in which he raised an interesting prospect. That in the not to distant future there will only be a relative handful fiat currencies standing. The likes of the TRY, COP and NGN could be on their way out. And Bitcoin could be one of the most logical places for inflation victims to seek refuge. If central banks can keep a ponzi scheme propped up with constant-inflation for 100+ years, I don't see why there can't be a known quantity like BTC that can act as a generally agreed upon store of value.

All assets have pros and cons. Some of crypto's best pros are that it is difficult to seize, is permissionless and you can take billions across borders without being detected. With all that the cartel are up to, those are the properties I am looking for. Not big clunky bars, or digits on a screen that could go to zero. I think it's clear that the battle of our age is decentralisation vs. centralisation - in all spheres - banking, governance, health, media, finance, food...

As for comments that BTC is too hard to use - yes. Most people will need to have their crypto held for them. The Lightning Network has changed a lot for Bitcoin, transforming it from a clunky, technical and inadequate coin, to a potential legacy banking killer. It's already eviscerating the banking vultures in the far-right, abortion-free dictatorship of El Salvador


Joachim-Gaius said:
You completely nailed it. The S&P500 is far more risky than the average person realizes it to be. 6 stocks represent approximately 25% of the S&P500's value (cap weighted) . . . one of which is Telsa with a P/E ratio that swings between 300 - 1200+. And yet S&P500 cap weighted funds make up a cornerstone of nearly every pension scheme in the world. But it is a psychological feat to not invest some of one's assets into such funds, as they have truly triumphed. Not certain what the answer is, but we do know that the temptation to manipulate public markets has proven to tempting for central banks to avoid.
Click to expand...

I believe most of the giants of today's market will be considerably smaller if not bankrupt by the time we are leaving this coil. The cities they operate from will end up being some new version of Detroit, Baltimore or St. Louis, i.e. centres of commerce reduced to the worst places in LatAm.

This thread was started in Aug 2020. The Economist looks like it should be hiring some of you guys. 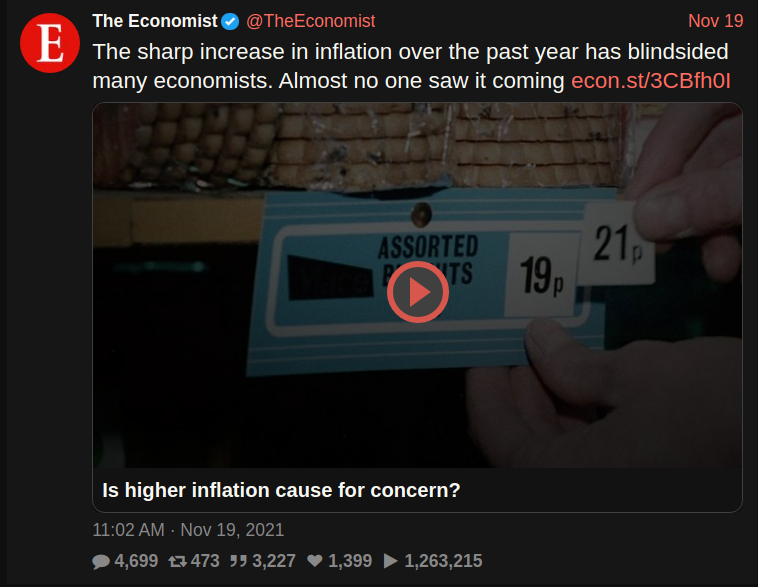 Just imagine not being able to see inflation in the official numbers all year.
Last edited: Sunday at 10:27 AM

I just downloaded the Strike app. The lightning network paired with a simple app is a game changer.

Only countries that can use it right now are United States and El Salvador. I think it'll be like worldwide Venmo in a few years.

*Please don't look at the date.

DeusLuxMeaEst said:
We focus on the inflation in the US, but this is a worldwide problem. Countries like Lebanon and Turkey are getting hammered, not to mention the usual suspects like Venezuela and Argentina.

Sri Lanka, Iran, S. Africa, Ukraine, Egypt, and Pakistan could also be feeling the hyperinflationary heat in the next 12-24 months.
Click to expand...

That is because of the "exorbitant privilege" to quote Charles de Gaulle, of owning the reserve currency... The US can effectively export its inflation everywhere else, with much more muted domestic consequences. The greatest trick in monetary history was going from an asset backed (gold) currency to one that is backed by US government debt... Which is treated as the most pristine collateral in the world. Think about it for more than 5 seconds... It is ludicrous but due to the wealth and post war power of the US, the rest of the world had no choice. Governments and banks around the world had to buy our debt if they wanted a seat at the table. That is going to change.

The End Of Super Imperialism

How the U.S. succeeded in turning the dream of monetary imperialism into our current inequitable reality, and how Bitcoin offers a new standard.