Gold Member
The root is that we live in a society based on the values of pride, greed and lust.

When those Pandora's boxes are opened en mass those who don't get access to that value become envious, angry and despondent.

The blacks are the most engorged by greed, via the culture they themselves and others have given them. Yet they by and large have no pride as few can access the worldly delights that would give them pleasure. There comes the jealousy of those who do and Hunter Biden's dad and many others tell them that the jealousy is just and they should be angry. By the way, if you don't vote for the party of the KKK you'll all end up back in chains.

It is clear the death of Mr. Floyd is of no relevance here. The glee of the left is not hidden any time there is an even that can be politicised. Twitter is awash with salivation that another disgusting, white male has committed a hate crime. When the narrative breaks down, it doesn't matter, you can just write an article on how a homophobic Islamic blood-bath is the fault of gun-owning Christians. Floyd is the sacrifice, they are the saviour.

In the religion of the left,# they want to be the saviour while having the spoils and heart of the perpetrator, and have someone else play the role of the sacrifice. This is the behaviour of those who inhabit the lowest circle of hell - the treacherous. Those who will be the friend and ally of others only to use them for personal gain. Ultimately the left benefits the most when its minions are killed.

The left needs a constant viscous cycle of victim, perpetrator and saviour in order to exist. Without the sacrifice of others they can't attain their perverse desire of having the spoils of both saviour and perpetrator.

The modus of the left has been revealed time and again through recent decades. It is a hatred of the ruling-class, not because it rules or is unjust, but because the left are not part of it. It's why when they took power we saw the most brutal examples of what their treacherous words said they were against. The left apparatchiks can't play the dysfunctional masculine mode of dominance to gain worldly delights. They instead play the dysfunctional feminine role of manipulation to gain them. Once they are in power they pull up the drawbridge to challenge so hard and so quick because they earned their place through treachery - not dominance or competence. Has Hunter Biden's dad been more successful in doing what he says he will do, or was he more successful in showering himself and his family in the sins of delight and status?

N.B. The left enjoy full-spectrum dominance, yet they espouse how nothing has ever been worse. What the!?

In the game of victim, perpetrator and saviour. The false saviour pretends to be the ally of the victim, to destroy the perpetrator, who he himself cannot defeat. The saviour then becomes the oppressor, because what is truly in his heart is dominion over others, worldly delight, sin.

Jesus took the role of both saviour and sacrifice, for he will take from you the burden of your own sin, if you but attempt to live without sin.

To add to that. This thread is full of images of people living in sin. They cannot sin as much as they would like. How many of them would be out rioting if they could now be on a big boat full of Instagram models? None.

Roosh posted a Tweet linking to an MSM article about how these riots are being directed by the ¡far-right! It speaks of how the situation is being used by 'accelerationists' who want to bring the system down for right-wing ends. I was looking through the guy's Twitter feed and he is a left-wing acceleration. The whole left/mainstream is accelerationist.

They are looking for conflict. It is their being. This saviour-victim-perpetrator cycle is a conflict. They don't want a truce. They want another victim on the pyre and you on your knee for their sin of throwing them on there.
Last edited: May 31, 2020
S

Predictions - had bad/widespread could this social disorder become? Is civil war out of the question?

Gold Member
The Elites are REALLY trying to keep a ball rolling. Holy crap. What a mess. I don't even know what ball they're trying to keep rolling. What happened to dat 'rona?

Roosh said:
Man gets stomped to death. May God have mercy on him.

Here is another video from a different angle. The beatings were pretty vicious.

Gold Member
Do we know if he's actually dead? Everyone is constantly lying on Twitter.

squiggly said:
Predictions - had bad/widespread could this social disorder become? Is civil war out of the question?
Click to expand...

As long as the gibs keep rolling this will fizzle out eventually. I'd only worry if that comes into question.

kamoz said:
The Elites are REALLY trying to keep a ball rolling. Holy crap. What a mess. I don't even know what ball they're trying to keep rolling. What happened to dat 'rona?
Click to expand...

If ever there was a way to get some community spread stirred up, I'd say this is it.

Perhaps, these riots along with the COVID-19 pandemic will be catalysts for major policy changes and less freedom in America.

Roosh said:
I feel sympathy for law-abiding blacks. They feel wronged by the police, and here come their saviors, the far left, to encourage them to violence to usher in the communist revolution where they'll be treated ever worse than now. Black leaders have sold them out, from Al Sharpton to Barack Obama, and now they're on their own, to be used by whichever groups sees them as a way to further their agenda.

This video is really sad. Its a Black man who owned a business that was destroyed and looted during the 1992 LA riots. Here he is confronting those people.

Eban said:
Perhaps, these riots along with the COVID-19 pandemic will be catalysts for major policy changes and less freedom in America.
Click to expand...

All I know is shit is going down in 2020. If you ask me there is a hidden war for supremecy between US and Chicoms, which will probably dominate this century.

iop890 said:
Do we know if he's actually dead? Everyone is constantly lying on Twitter.
Click to expand...

He lived but holy shit: 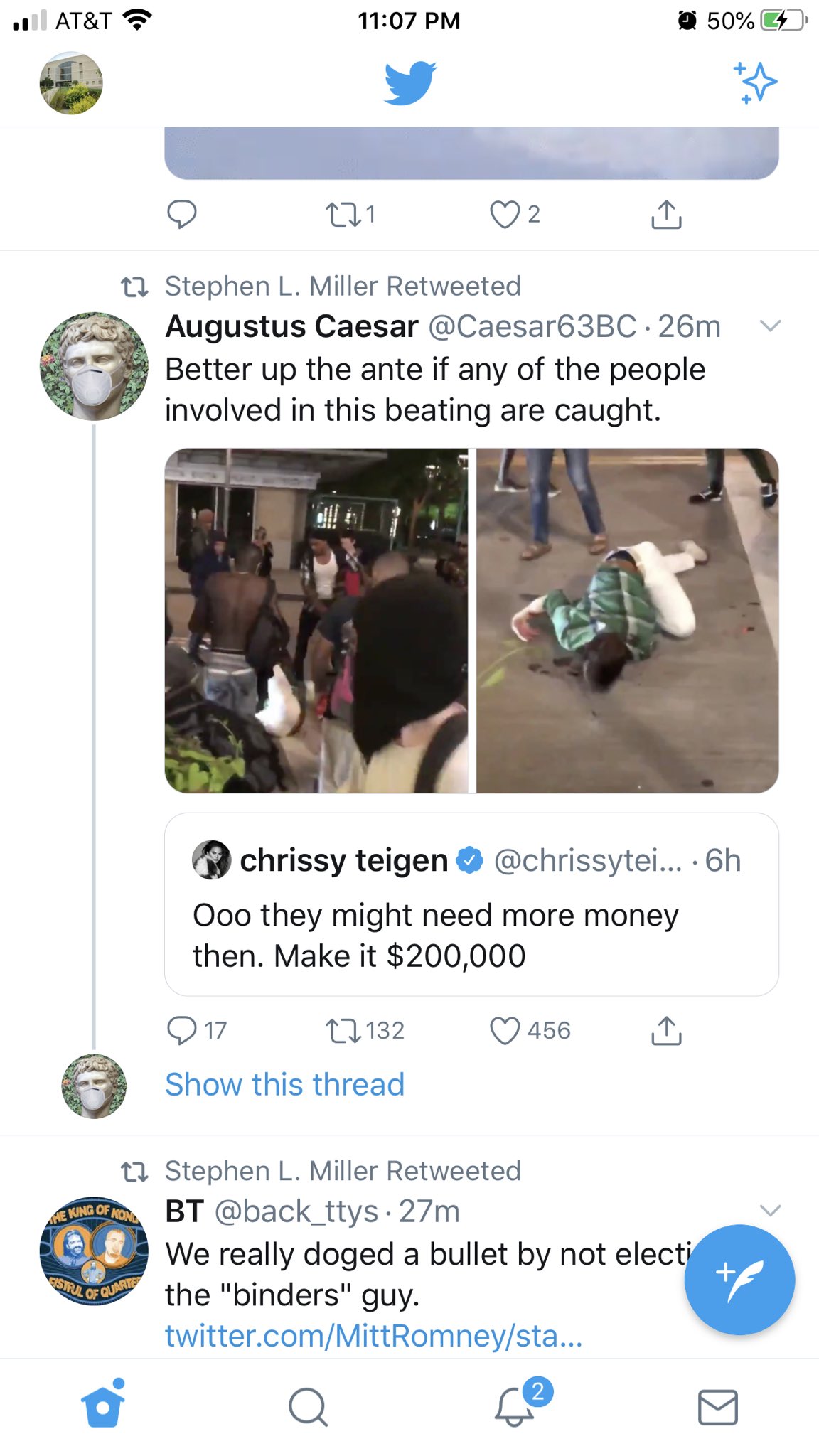 Daang, you mean I coulda strolled in there & gotten some free Jordans today? You don't say...

Ok jokes aside, that is normally a very expensive, heavily patrolled, ritzy part of Chicago that is typically full of tourists & other law abiding citizens (the border of the "Gold Coast" & "River North" areas off of Michigan Avenue if I'm not mistaken). This is an area where PUAs in their heyday would have recommended for "day game". Seeing this happen there is stunning...
E

Gold Member
The Zionist billionaires must be nutting themselves right now

It_is_my_time said:
I don't see how this helps him. He already demoralized his base and the energy behind him is gone. Now one last thing he could have campaigned on, "law and order" is out the window.

Where as the Democratic party base is excited. I don't know if that will translate into them voting or not.
Click to expand...

Where do you get this stuff from? The Trump base has never left him. The Democrat base is anything but excited that Joe Biden will be their nominee. The last thing reasonable people will do to maintain law and order is vote for a man suffering from dementia.
J

This one was all over the news. The dragged protester definitely died a gruesome dragging death by semi truck. But these are the risks that come with hanging out at a protest or riot past 2 AM in St. Louis or any other urban city in America. The FedEx driver felt he had no choice but to slam on the accelerator as other rogue rioters flashed guns at him & other ones stole packages from his truck.

Poor truck driver already had to take a detour that he didn't want to take due to a highway closure.
J

eradicator said:
The Zionist billionaires must be nutting themselves right now
Click to expand...

Maybe someone should tell BLM that the j00z convinced the cops to kill black people. Give the Zionists a taste of what they like to spread around. Heheheh.

Uzisuicide said:
Where do you get this stuff from? The Trump base has never left him. The Democrat base is anything but excited that Joe Biden will be their nominee. The last thing reasonable people will do to maintain law and order is vote for a man suffering from dementia.
Click to expand...

To not distract from this thread there is polling information in the "Complaints About Donald Trump Thread".

I stand by what I said in answering the question. I don't see how this helps Trump whatsoever. I don't know if the Democrats can jump on this momentum or not.
J

It_is_my_time said:
To not distract from this thread there is polling information in the "Complaints About Donald Trump Thread".

I stand by what I said in answering the question. I don't see how this helps Trump whatsoever. I don't know if the Democrats can jump on this momentum or not.
Click to expand...