Time for police to fire back using live ammunition.
Screw the pepper spray and tear gas

We need a Deus Vult emoticon. Maybe the little yellow guy with flaming sword and a shield emblazoned with a cross.

911 Emergency Services needs to adopt this as their new answer for 911 calls:
" 911, do you support the black lives matter movement?" If the caller says yes, then say "you are not welcome to use this service", and hang up. If they did that for a month, then people would start singing a whole different tune.

Handsome Creepy Eel said:
Why are they rioting now? The offender was charged for the only thing that he could have been charged for. Or did they expect 1st degree murder charges?
Click to expand...

The ONLY reason for any rioting is the media portrayal of the outcome.
The first headlines I saw actually portrayed this as a positive, just action.
And actually the officer who acted the most negligently *is* indeed going to be prosecuted.
If the media portrayed that as a just and righteous result, then there would be celebrations today.

And then I saw a story that the family was upset with the turn of events. Confused, I read and saw the narrative change almost immediately into the idea that this was an awful and unfair development.
And so people are outraged.

It's the same reason why I saw a guy during the Gulf War paint his rear view window with "Nuke France, Invade Iraq, Take Their Oil" (this man was actually a French teacher and neighbor, who was enraged that the French did not want to invade and occupy Iraq because reasons).

It's the same reason people rage about "turning Iraq/Iran/Syria/Lebanon/etc into a glass parking lot!"

But no one is outraged that a neighboring tribal Semitic ethnostate has, not just weapons of mass destruction, including biological diseases, or illegal chemical weapons, but nuclear weapons, which they obtained through espionage and theft of US military material, and to this day defy all international treaties on nuclear weapons. If the media told a different story, everyone would be ranting and raving and wanting to destroy this nation, but instead we are told they are our literal greatest ally.

The media could easily whip up a crowd into a frenzy over a Louisville black man executing white strangers at a restaurant.

We could be marching in the streets demanding an end to pan-African violence in our streets after a black man killed a 5 year old white kindergartener riding his bike, and talking about how Africans simply cannot coexist peacefully with European peoples, but instead most people don't even know this happened because of the way the media handles the story.

This whole Louisville story is about an indictment, which is meaningless. Derek Chauvin, who knelt on George Floyd's neck at the beginning of all this madness, was indicted THE NEXT DAY for causing the death of Floyd. The Breonna Taylor thing for some reason was stretched out for months before they took action (THAT would actually be an interesting question for the media to look into). But indictments are inconsequential. Any prosecutor will tell you that you can "indict a ham sandwich" because indictments are basically rubber stamps and are close to 100% successful. I have actually never read of an indictment that a grand jury failed to return.

The REAL news will be the prosecution, trial, and particularly the verdict and punishment. Of course, that all depends on how the media spins those events. They could be completely unimportant stories, or they could be the cause for a civil war. Or something in between. It's all how they spin the message. As a famous German man once stated, In a Democracy, it is rule by media.
Last edited: September 23, 2020

It's embarrassing how many american cops are fat.

It sounds like they already have someone in custody for the shooting in Louisville. Also, there is a vid' or two out there of the shooting. The shooter looks to be wearing a yellow hoodie and shoots across or through two women:

"BREAKING: Louisville Police Reportedly Have ‘Suspects’ in Custody After at Least Two Officers Were Shot (VIDEOS)

Two Louisville Police officers were shot during the riot over Breonna Taylor on Wednesday evening.
Reporters at the scene described hearing at least ten gunshots during the incident.

Orthodox
Gold Member
Edit. Recognize that woman with a burqa on her head? Guess who that is. 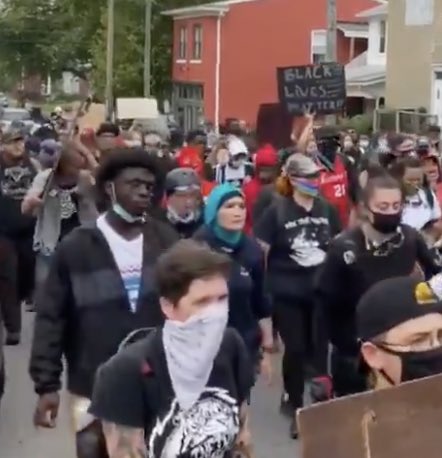 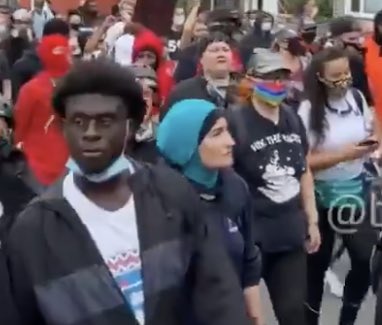 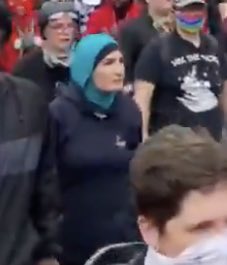 nomadbrah said:
It's embarrassing how many american cops are fat.
Click to expand...

The police will need to get a whole lot fatter before they can adequately represent America.

Orthodox
Gold Member
Listen to the rounds of gunfire. Count how many shots were fired.

If you actually did send in the military, who is to say that Trump would have control?

If you need the military, which operates outside the judicial system, why would they relinquish control to a politician?

nomadbrah said:
If you actually did send in the military, who is to say that Trump would have control?

If you need the military, which operates outside the judicial system, why would they relinquish control to a politician?

Dude, what are you even talking about?
J

These movements are not as homogenous as twitter will make you believe. Case in point I was at my local skatepark today. The skatepark is located close to one of the most dangerous cities in the country. There is tons of graffiti especially BLM. Some lgbt trans girl spray painted trans live matters. One of the locals someone who has nothing to lose spray painted BLM on top of the trans graffiti. Next thing you know tons of lgbt started showing up and basically having a picnic at the part of the park where the spray paint incident happened. The locals start getting upset and as the night grew on tensions increased. Right before the lights were about to go out a shouting match started between the locals and some of the lgbt crowd. A fight broke out but was eventually squashed. During the melee the locals were basically saying "gtfo with that sjw nonsense were trying to skate". Of course the lgbt crowd were reeing all night. Everyone eventually started to leave because the locals in question are not the type to end a dispute with fights, they settle matters the way they are usually settled in the ghetto. The last thing I heard was one of the locals say " ima catch you slipping ". Needless to say there is now a serious divide at the park. This all happened tonight. The media will make you believe that every single black person in the hood is down with BLM or Antifa. The reality is most of the true inner city population only care about themselves. If you have something free to offer they will join up no problem but otherwise they are skeptical of outsiders. Theres a reason most of these protests are outside of the ghetto and involve a large population of whites. Just like they wouldn't dare step into a heavy red area they also won't step into the ghetto either.
N

MRAll134 said:
Dude, what are you even talking about?
Click to expand...

The guy on Twitter saying to send in the military.

Here is a pic' of the white supremacist, who shot and wounded two officers. An update on the shooting victims:

" -Officers are both expected to survive
-One officer is in surgery"

Orthodox
Gold Member
I posted this reply to Roosh's post via "Reports from affected cities" a while back:

Roosh said:
I did hear from a military friend that his source states that Antifa factions are currently accumulating mass weaponry.

Schneider's remarks:
Many of Antifa’s needs are provided free of charge by allied organizations.

Other organizations such as Riseup.net provide Antifa chapters with free access to secure servers, communication tools, and applications.

There will be more attacks, and violent rioting techniques will continue to grow in capability and sophistication. Their cadres will grow. They will align with other disaffected forces, as they have done so far. There will be more autonomous zones, for increasing periods of time.
Click to expand...

They are protesting/rioting in Dallas too. BLMers try and take over the City Hall parking garage. Still ongoing: