@maustermuhle thread continue
===============
Clearly this tweet is getting lots of play among supporters of Barr. But it’s worth noting that the story notes that Barr overruled his own U.S. Attorney in D.C., who said the rioting arrests that were made largely couldn’t be sustained in court.
...
This is all notable because the history of prosecuting “rioting” charges in D.C. is, well, problematic. After hundreds of inauguration protesters were arrested and charged with rioting in 2017, almost all of the cases fell apart, were dismissed or ended in not-guilty verdicts.
...
And now we have a cases where one senior DOJ official is telling D.C. police he can’t charge the people they are arresting for rioting, because there’s little or no evidence. So Barr steps in, and suddenly we have some charges. But it’s only a handful of all those arrested.
...
And sure, you could say that Barr has every right to step into decisions made by his underlings. But it will raise questions about political motivations. The U.S. Attorney for D.C. is plenty law-and-order these days, after all.
===============
Click to expand...

This is bullshit. I don't know how the law is written, but simple presence in the riot area after a dispersal order should be grounds for conviction.

Protestant
Anyone who engages in public dissent is now the target of arson.

The person below had a Trump sign in his yard. 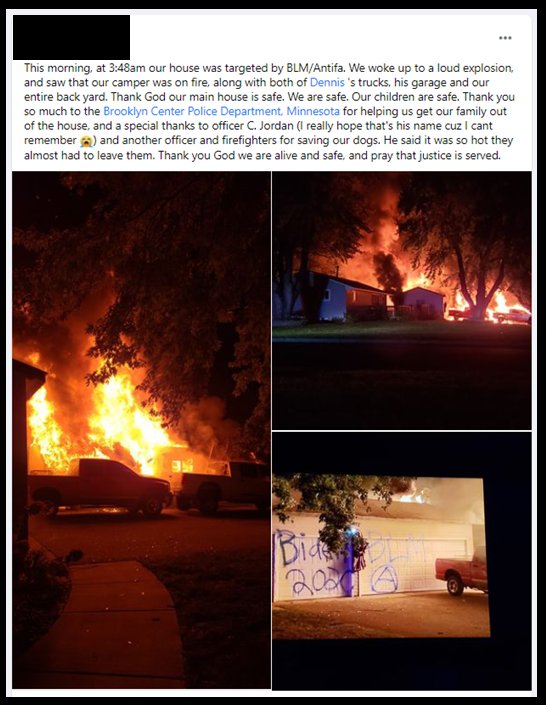 Antifa isn't strategic.
They want to harass people and make the news.
That's the only goal.

These are not high quality political operatives, they're the bottom of the barrel of society.
They are only effective because the democratic party runs entirely on the mud and not normal taxpayers.

In Dallas we've had two nights of poz attacks on restaurants and bars, mostly isolated to downtown and uptown.
Deep Ellum:


Note: I was in downtown Fort Worth last night, no protests. Quite pleasant by comparison.
It's a better city by leaps and bounds. Dallas is LA basically.
L

Banned
Other Christian
Another day another murder attempt on Trump supporters 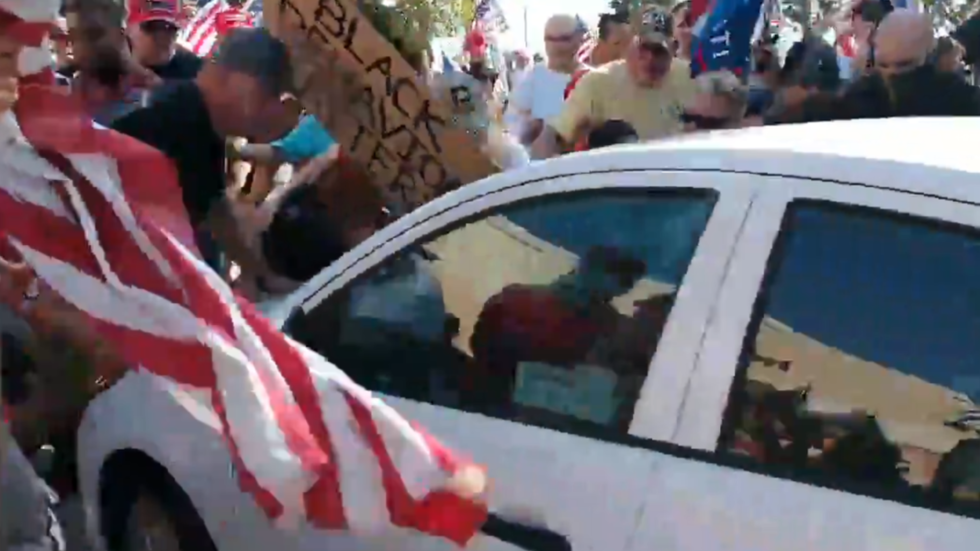 A video has captured the moment a car pushes through a crowd of apparent supporters of US President Donald Trump in Yorba Linda, California after they reportedly squared off with Black Lives Matter protesters.

Riots are going on in Seattle:

And of course, they are going on in Portland too:

You have a literal insurgency in your country America and you still believe voting Red or Blue is going to fix it. When in history did the powerful entities behind such movements care about your ballot?

godfather dust said:
So the FBI is now going after people who use BLM money for cars, clothes, or whatever other trinkets dude got, instead of sedition.
Not really surprising at this point, but further evidence the FBI is beyond repair and needs to be shut down ("defund the police" you could say.
Click to expand...

LeoniusD said:
To put things into perspective a few examples of recent black on white crimes - some clearly done with racial animosity in mind:

The 17yo girl Veronica Baker was stripped naked and raped before her death - the 'empowered lovely ladies and gentlemen' knew her partly from school. If the roles were reversed then this would be center stage for months.

Veronica Baker Was Scheduled To Start College Today, Instead Her Parents Are Planning Her Funeral. This Is The Type Of Story That Makes National Headlines When The Races Are Reversed… Veronica Lee Baker, 17, was murdered in the parking lot of a Bojangles’ fast food chain in Raleigh, North...
www.nationalistreview.net

Nichole Merrell was killed in a parking lot by this animal while holding her child. That bastard even shot the little girl.

There is an epidemic of racist crimes alright in the country - it's black on white racist crimes. They should get their Liberia. Personally I would advocate for a split of the country or a Africanexit for those who want to go home to African utopia.

And the media will keep a lid on all of it, the people will keep on dying since they don't know that they should be very careful and best armed and ready to fight with every encounter with black people. The very top wants this, because it's mainly goys who get killed. Jewish NYC neighborhoods have started armed watch groups, that are tolerated despite the restricting gun laws due to them being Jewish. But Christian goys would never be allowed to do the same in order to protect them from black enrichment. 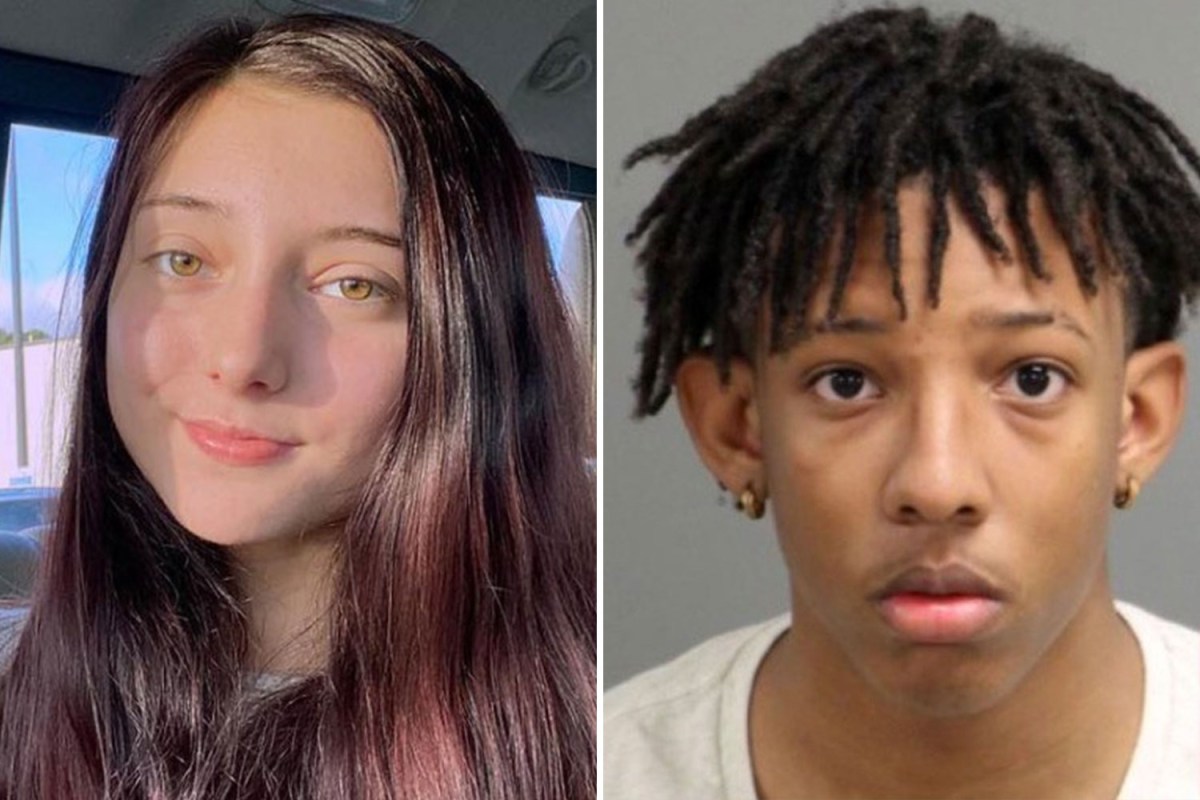 It's like a picture similar to the orcs and elves memes - a pretty girl and her rapist-murderer.
Click to expand...

Death penalty for all the guilty.


A reporter gets pushed over and a protester pleads: "let me go!" Probably not going to happen:

Banned
Hopefully there are some Federal charges being brought now that some PPD are deputized.
J

infowarrior1 said:
Death penalty for all the guilty.
Click to expand...

It's too bad that these stinking murderers can't be deported to the poorest areas of Africa. Maybe some tribal chief will have his people eat them for dinner. Sending them to Wakanda could potentially solve a lot of America's problems. And I say this as a fellow that actually enjoyed the Black Panther movie to some degree & thought Chadwick Boseman was a decent actor heh.

A woman (if you can call her that) was charged with two cases of attempted murder, in Yorba Linda, CA. She is the one who drove her vehicle through a Trump rally this week:

Tatiana Turner, 40, was accused of striking and injuring two people with her car during clashes between anti-police brutality protesters and pro-Trump counterprotesters.

A Long Beach woman was arrested and charged with attempted murder for allegedly striking two people with her car during a Black Lives Matter protest and pro-Trump counterprotest in Yorba Linda, California, on Saturday.

Tatiana Turner, 40, was accused of driving her car into a crowd of people, many of whom were seen waving Trump flags. The car struck a man and woman in the parking lot of the Yorba Linda Public Library, the Orange County Sheriff's Department said.

The two people were transported to a hospital with "major injuries" but are expected to survive, according to the department. The man had two broken legs and the woman suffered major and moderate injuries throughout her body, Sgt. Dennis Breckner told the Los Angeles Times..."

The devil and his ilk sure are having a good time out on the streets, don't let them come into your homes, your minds, and your actions. These roving herds of animals are going to continue what they are doing until an armed force large enough to stop them does so without impedance.

Foolsgo1d said:
You have a literal insurgency in your country America and you still believe voting Red or Blue is going to fix it. When in history did the powerful entities behind such movements care about your ballot?
Click to expand...

Politically speaking voting red will stymie some of the most insurgent people, firstly.
Secondly the culture wars will be next on the chopping bloc. Many seditious groups and entities are "protected" by governmental laws that will be removed soon and then it's open season, in minecraft, of course.
America has a bit of knack for war, conquering and removing seditious entities. Don't count the country loyalists & patriots out just yet.

jordypip23 said:
It's too bad that these stinking murderers can't be deported to the poorest areas of Africa. Maybe some tribal chief will have his people eat them for dinner. Sending them to Wakanda could potentially solve a lot of America's problems. And I say this as a fellow that actually enjoyed the Black Panther movie to some degree & thought Chadwick Boseman was a decent actor heh.
Click to expand...

No. I wouldn't want criminals set up shop somewhere else and later come back. MS-13 gang bangers were deported to El Salvador and now they are back in the US and more powerful than ever.
E

infowarrior1 said:
No. I wouldn't want criminals set up shop somewhere else and later come back. MS-13 gang bangers were deported to El Salvador and now they are back in the US and more powerful than ever.
Click to expand...