RUSH: No longer is this just gonna be a long list of stories that I might mention on the program. Now, you will get specifically the stories that I talk about on the program and a select list of a few others that I intended to get to but ran out of time. It's going to be more of a real-time base...

Gold Member
Feminism was established so as to allow unattractive women easier access to the mainstream.

Anyway, this is a big one, probably deserving of its own thread.
Last edited: February 17, 2021

Gold Member
As expected...Leftists' hatred toward the Right continues to show their true colors. They aren't interested in "unity" or "middle ground". 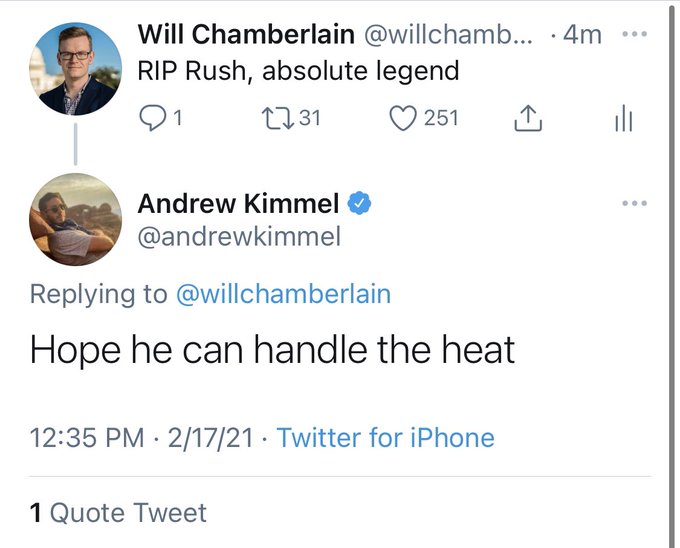 I'm your host, Rush Limbaugh, with half my brain tied behind my back - just to make it fair.
Click to expand...

I think he was obliquing alluding to the fact that he couldnt tell the real truth, and make the arguments he really wanted to make ... but that he would win anyway. He ... and the GOP ... underestimated their enemy ... and lost.

Sad to hear about Rush today. A true pioneer. I'm happy to hear he had Christ.

Gold Member
I think I was born right leaning and tough as nails where needed to be but I still remember as an 8-12 yr old listening to Rush with my uncles, one of which was just a fatter version of Rush, and getting their politics of the day and his opinions on them. Good times.

Rest in Power, Rush.
A

We can start a new thread for higher profile figures.

Mouth piece for the Iraq War and would never speak on the true (((elites)))......gatekeeper.

Gold Member
He was the very embodiment of BoomerCon, which ultimately is a very damaging political current.
J

Back in the early 1990's he was the only conservative with a non-print media presence (unless you count Bill Buckley's Firing Line 1/2 an hour each Sunday) and he brought over a lot of people. Pre-Fox news (back when Fox was conservative) and pre-internet. It was the three TV networks and CNN. There was no such thing as political talk radio before him--even liberals like Larry King mainly interviewed people on their radio shows. Rush invented the genre then ruled it. He also made it fun--some of the spoof songs were hilarious. He proved that there was a huge market for people wanted the other viewpoint.

I have not listened to him in years--I mainly listened to him back in the early/mid 1990's when I was driving some during the day between classes and work. He was a serious force for the good. Criticize him for not being perfect, but he was the only game in town back then.

She’s responsible for my tag line. The original. I made it a G version per the request of Roosh to be compliant with new forum rules.
B

Blessed be the man who angers so many liberals!

Rush was the opiate of the conservative masses. He is partly to blame for why conservatives are in the current state of despair. He had 30 years to build opposition, but sadly, he used his influence to amass fame. His radio show was like pornography: enticing enough to get you to listen and provocative enough to keep you hooked.

I listened to Rush daily for years until the local station went to Mexican Norteno. I learned alot about the vileness of liberals. He forewarned many of us. Sad to say though, the gravest and darkest battles lay ahead. Rush got out of here before the excrement hits the fan hard. I thank God for El Rushbo. Rest in Peace.
S

Such an important man in my opinion. He was always appreciative and respectful of his callers, unlike the other conservative talk radio hosts who became bored, arrogant and banal.

He also never fell for the “never Trump” idea, because he, like Trump, actually understood what Americans are like. He once said something like: “people who are shocked at Trump’s campaign don’t understand how America talks.” I thought that was insightful.