What is the go here? There is no way that Sweden can defend against the might of the Russian army. Although on the flip side, if Sweden were invaded then you would anticipate swift action from the US which Russia wouldn't want either.

So doesn't this strike as an exercise in huge waste of money?

More likely there are some people in power thinking ahead and where demographs will be in 15-20 years time. And those demographs are not Russian.

Gold Member
^^Precisely. Russia is simply a convenient boogey man. They’re preparing to potentially move into cities to clear out Muslim gangs as of this week:

“Swedish PM does not rule out use of army to end gang violence”. —> https://af.reuters.com/article/worldNews/idAFKBN1F629T

If Sweden actually was facing an imminent threat of war from Russia, other European countries would be too. This is pathetic, really. The Swedish government can’t come out and call the kettle black for fear of being “intolerant”. Sad!
N

I remember when you would be called a crackpot nazi racist xenophobe when you said the end result of immigration was military in the streets.

Banned
Other Christian
Gold Member
At this point being invaded by Russians might actually save Sweden from its own self immolation.

Plus, you'd get lots of awesome battle scenes of muslim rapefugees getting blown to bits trying to fling their shitty stolen grenades at Russian tanks.

Catholic
Gold Member
In an actual war with Russia, the cucked tiny Sweden would last around 6 hours. It would be more trouble for Russians to mop up the remaining Radical Islamic Guerillas than to destroy the so-called "Armed Forces of Sweden".

Banned
Actually Sweden is preparing for with the gangs of the No Go Zones - it has been discussed in parliament.

Non-Christian
I don't think the Swedish armed forces would be that easy for Russia- the Saab Gripen would give even the SU-35 some problems. And the Gripen doesn't even need an air field.

bonkers said:
So doesn't this strike as an exercise in huge waste of money?
Click to expand...

So with that logic, why would any small country have a defence then? They're gonna lose the war anyway.

No, the point is that even if Russia know they would win such a battle, it might not be worth starting a war for them, if they know it's going to cost several lives and money.

But the other point is that Sweden isn't worth saving anymore and would be better off with a strong leader like Putin who could get rid of homos, feminists and muslims. So that's why an invation would be great after all.

Sweden allowed themselves to be invaded by Arabs and Africans.
A Russian invasion would be an improvement.
And the Russians could do it on a Saturday morning.

Banned
This just in a few days ago from Sweden as shared by Leonard:

"Muslim immigration is going well. There is nothing to be alarmed about. Also, we need to ready our military to invade our own country."
Click to expand...

All this preparation against a unilateral Russian invasion is about as useful as Joe average fortifying his home against an invasion of the First US Infantry Division.

Russia has next-tech weaponry that they did not even dust off for the little Ukraine conflict (little to Russia).

An all-out attack on any European nation whether Sweden, Finland or Poland would automatically launch us into WWIII with Russia. The Russians have EMP bombs and other high tech wizardly. You would know if you were at war with Russia, because you would be sitting in the dark without water - and you would know jack-shit because the internet would be down.

Most people don't know anything about how really advanced modern weaponry is - what is being implemented in the Middle East is nothing. Even Desert Storm and the Iraq/Afghanistant wars were mere formalities. To the US those forces wee tantamount to bushmen. ISIS are bushmen too - the only thing that complicated it was that the globalists including the US funded and supplied the bushmen. (And the unwillingness of some forces to simply napalm-bomb ISIS guerilla fighters hiding behind civilian buildings.)

Russia however or a country like China would be a highly dangerous enemy - all-out war would be waged that includes all the modern weaponry.

Sweden's war preparation for a Russian invasion is like anti-rape tactics of 18yo girls who are informed that they should wear "Don't-touch-me" bracelets to prevent sexual assault and rape while getting busy at a dance party at a refugee enclave. 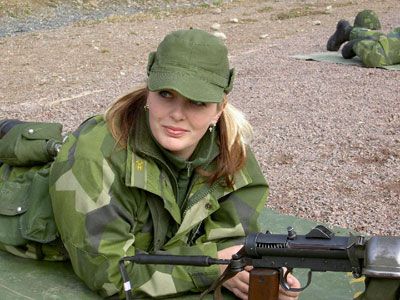 Sweden cold've avoided all this by joining NATO, but they didn't want to do so.

All of the sudden, it doesn't sem like a bad idea, eh? LOL

Gold Member
They don't even need EMP weapons to have you sitting in the dark. These days they flip the switch on a few select intrusion viruses and before you know it the computer systems in every major utility brick themselves.

You wouldn't even get the privilege of tracking a missile into your airspace for a few seconds to determine who hit you. Power, internet, gas, water, cellular service and phone lines would all go out damn near simultaneously. Government would be left to use battery/generator powered shortwave radios and what few satellite phones they'd distributed in order to mount a response.

Other nations would be able to track Russian military movements but for a time there would be little they could do about it.

Cyberwarfare is the new M.A.D. scenario. Most systems are so vulnerable it's a running joke. Of course such a large scale attack could only be used as a preface to total war. If peace remained after such an attack then the digital trails would inevitably be traced and either the perpetrator or a suitable proxy would have some serious hurt put on them.
N

I think it's very possible the Russia thing was a ruse for Sweden preparing for some kind of civil war.

Sweden doesn't need to join NATO. The 60, 000 American troops in Europe arent going to just sit there and watch.

I can tell you from living in Estonia that the Fins and Baltic states take a possible invasion very seriously and I believe their fear of one is genuine whether Russia is a bogeyman or not.

I wouldn't underestimate the scandi countries at war with Russia. Theyre ecomically powerful and more advanced. Cucked or not. In 1939, even though they lost, Finland absolutely slaughtered Russian troops for most of the winter war.
N

Lots of guns in Sweden.

Orthodox Inquirer
Gold Member
Any declaration of war with a state would most likely see IP addresses from those countries and allies blacklisted. We'd see undersea cables shutdown and the world internet sealed.

Blocking and sealing off parts of the internet is trivial. Businesses would get pissed, but they'll get over it.
You must log in or register to reply here.
Share:
Twitter Email Share Link
Top