I listened to this this morning. Some of this info really points to the Fed knowing this crash was coming and that their QE tools were coming up dry. For those of us who feel like there is a plandemic part to this, the virus would be an opportunity to bring in new Monetary Policy tools, that are only allowed because of Coronavirus.

What's going on with us being in a deflationary period despite all the money they printed, again?

kel said:
What's going on with us being in a deflationary period despite all the money they printed, again?
Click to expand...

According to this guy we were already heading towards deflation as per Fed Reserve.

Money velocity is the main cause, they are putting more money out there but people aren't spending it the same way so it doesn't circulate through the economy. An example would be gasoline/oil, even though there is more money, price goes down because demand has dropped so much. Supply and Demand

NoMoreTO said:
According to this guy we were already heading towards deflation as per Fed Reserve.

Money velocity is the main cause, they are putting more money out there but people aren't spending it the same way so it doesn't circulate through the economy. An example would be gasoline/oil, even though there is more money, price goes down because demand has dropped so much. Supply and Demand
Click to expand...

There are two big concepts that people do not understand about inflation. One is that, as mentioned, inflation depends on the velocity of money. If people save their money, rather than spending it, there is no inflation. The second is that most new monetary policy tools do not add to the M1 money supply, which is exactly why QE created asset inflation but not necessarily the HUGE inflation that people expected in retail goods. Loss of faith in the currency, plus several other important factors, creates hyperinflation because people do not want to hold a worthless, quickly depreciating currency.

Deflation is usually caused by massive wealth destruction from cascading debt defaults and a contraction in credit, which we will eventually experience because of out-of-control debt. This scenario scares the central bankers more than anything else, because the finances of most major governments are based on debt -- and their economies are sustained by continual increases in debt.
Last edited: May 25, 2020

Gold Member
Despite the S&P 500 almost closing above 3,000 today (which is a very significant level), the smart money expects a deep decline in price -- as explained in the attached article:

Every week, a government office few investors are aware of tells us exactly what the "smart money" is doing in the stock market.

The chart below shows positions of these two groups at the bottom of the chart. The price of the S&P 500 is at the top. The red line shows positions of small speculators. Large speculator positions are shown in the blue line.
* * *
Both groups are positioned to benefit from a large price move. One group has a history of success in the market while the other group has a reputation for being wrong. The smart money is screaming that another decline is likely. Smart investors will heed that message.
Click to expand...

Probably foolish but time will tell

Tail Gunner said:
Despite the S&P 500 almost closing above 3,000 today (which is a very significant level), the smart money expects a deep decline in price -- as explained in the attached article:

Every week, a government office few investors are aware of tells us exactly what the "smart money" is doing in the stock market.

I looked at the recent 13F from the best performing funds. While there is nothing in there regarding their short positions, they purchased massively in the downturn. Example, Renaissance Technologies holds Bristol Meyers Squibb for ten years or so and they bought more.
Just look at the best performing funds and ride with them. Buy puts if a downturn is coming.

Probably foolish but time will tell
Click to expand...

There are 100 companies working on a vaccine... how do you pick the right one?

Orthodox Inquirer
Just a quick note without having read the whole thread: when people throw around terms like "inflation" and "deflation" if they do not define what they mean, then their analysis is pretty useless.

Inflate means to grow larger, as in to inflate a balloon. Stock prices inflating means they are increasing. Deflating means shrinking.

Many times people will talk about money deflation, meaning people have less money because they are not working (as of June 1, 2020 there is definitely deflation of money because almost no one is able to work full time). But the stock market is actually rising. The rich are making tons of money. And loans and bailouts are given to those who are politically connected. So while you may have less dollars to spend on things like food and clothing, there can be, and was, more currency given to elites via central bank "lending" activities.

Just do the math... a $1 to $3 trillion dollar bailout and all we got was 150 million stimulus checks of $1,200 or $180B. That leaves $820B or maybe trillions of money going to the wealthy elite class. The money supply is actually being inflated on a macro scale, while deflated on a micro scale (currency to spend). There is little money in bank accounts but large amounts in investment funds. Those that received the bulk of that bailout are using it to increase their wealth (buying property, businesses, assets) and those that need to buy food, housing, shelter, etc. are in short supply of money. This is why I despise macroeconomics because a macro view rarely gives the real picture of what is going on.

On top of all that, the rules of classical economics are violated on such a regular basis, and huge corporations can go decades without turning a profit, despite living in a supposedly "capitalistic" society where profit rules everything. In reality, profits are not the main concerns of these corporations, as has been discussed here in other threads. The bottom line is, tread carefully, and do not try to use reason or logic to predict what should happen next.
E

I said this near the top of this thread. I lived through 2000 and 2008 and saw massive declines. Don't follow doomers or perma bulls. Follow time, price, and pattern. That's all that matters. A couple months ago people were 'sperging even on here. I don't want to call anyone out specifically but there were definitely prominent doomers here insulting and strong arming people into potentially bad investments.

Will the market make a second leg down? Maybe....maybe they will gap down from the top. I haven't bought a single put this entire trip because like I said early on this felt like fuckery to me. My positions? Long since 5/15 in futures and SPX call spreads. Easy to liquidate positions. If things turn south I can react on at least a 24 hour time table.

I feel what we are seeing now is the biggest corporate robbery ever seen. Even greater than 2008. This was a prime opportunity for corporations to dip their beak deep into the government well and come out completely clean. It's typical Jewish tricks and guess what? You get to pay for it. ^_^

Majority of tax revenue goes towards foreign policy (defense) and various actions which is designed to sprinkle cash payouts towards many corporate hands. Jews. Literally Jews in charge of your system and your lives. So stupid.
Last edited: May 31, 2020

Gold Member
You would think they would turn off the stock market pumping while cities are burning.

username said:
You would think they would turn off the stock market pumping while cities are burning.
Click to expand...

We might need to change the thread name, … but I wouldn't bet on it, a crash will have to come.

Probably foolish but time will tell
Click to expand...

A lot of the M&A activity in the mining industry happens among small- and medium-sized companies.

So you can take a look at an exchange-traded fund (ETF), like the VanEck Vectors Junior Gold Miners ETF (GDXJ), which includes companies that could be acquired.

But I also want to help you even more. So I found 13 gold companies with a market capitalization between $200 million and $500 million, whose shares trade in the U.S. or Canada.

These companies are also cash-flow positive. They generated positive free cash flow over the past 12 months.

(As a reminder, free cash flow is a profitability metric that is more conservative than net income. It can also be harder to achieve.)

Because they are so profitable, they could be the next acquisition target, like Guyana (A 250% Buyout Pop with a bidding war.

GDX and GDXJ and bitcoin are the only buys I have done so far this crisis and lots of selling. will buy more miners if there is a dip and lots more if there is another big crash.

Orthodox Inquirer
Gold Member
I just bought ETH (spot, long, Greyscale) and a few alts. Greyscale ETH note is up about 700% since the March crash. Now considering a portion of the above junior gold miners. I think they may go down, but they're still cheap and am happy to hold until they have their bull. 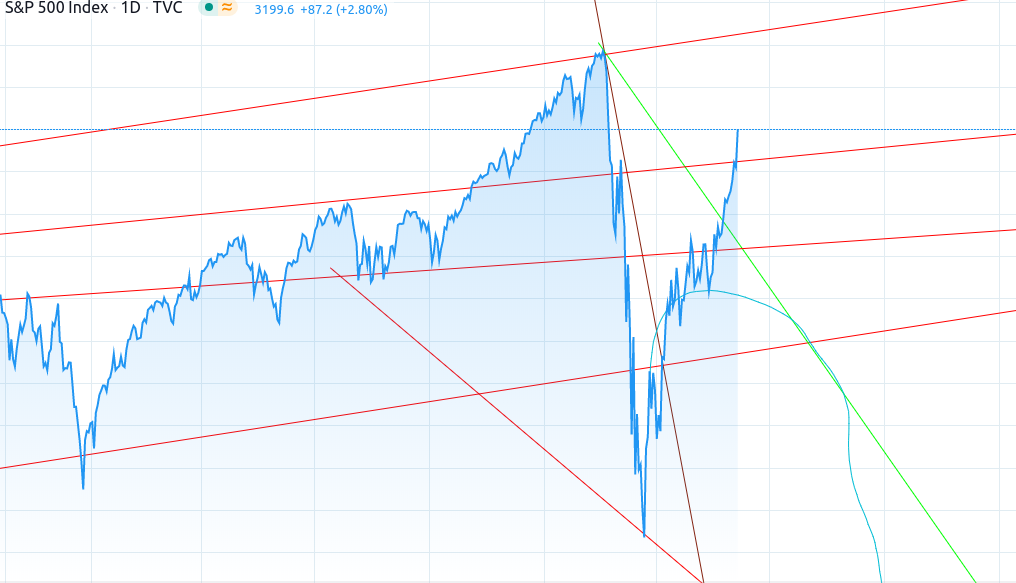 S&P has now broken through a support barrier, which is heavily into overbought bull. Next target takes us back to about 3,400.

I have avoided taking any positions due to the uncertainty of potential re-opening and more stimulus. But if it goes back to 3,400 then I will take the plunge.

Gold Member
I was bearish on plowing back into the market with the stocks I had pulled before the crash. Boeing, American Airlines, Delta, BORR, USO, UCO, JJ Foods, MGM resorts, Norwegian cruise.
Bought all of them back exactly 1 month ago and it's been a very green month and hopefully for another 2 to come before I offload the non-dividend paying stocks and search for more up and comers.
I like the ETF talk. I'm looking at NAIL, Direxion Aerospace, Direxion Defense among a few others.
What's the consensus on ETF's that pay dividends like SPY but also have higher yearly yields, hence more risk?

Mnuchin said US might print another Trillion to pump the markets. I'm not an economist but having to rely on printing money to keep the markets afloat doesn't seem like a solid foundation.

Gold Member
I loaded up on Put options for Visa, Hertz, Zillow. My logic is that any sort of Corona fear mongering from the media will trigger a sharp drop on Monday. There's zero chance this market balances out and starts climbing slowly again to previous highs. It's just a matter of when, not if, it starts to tank

Hertz was approved by the bankruptcy court to sell an additional $1bn of equity despite being in the middle of bankruptcy the shares almost guaranteed to go back to zero. We are truely in a clown market.