Google searches on this recent topic throw up rogue websites that claim his ex wife Kelly is jewish, but nothing official.

And then there's this from the new yorker magazine:

Alex Jones Is Just ‘Playing a Character,’ According to His Lawyer
By Margaret Hartmann
April 17, 2017

Alex Jones isn’t a conspiracy theorist who thinks “globalist” elites staged the Boston Marathon bombing, and Hillary Clinton and Barack Obama reek of sulfur because they are demons – he just plays one one the radio.

At least, that’s what Jones’s lawyer claimed in the custody battle over his three children, arguing that judging his client by his Infowars persona would be like evaluating Jack Nicholson’s parenting skills by watching him play The Joker in Batman.

“He’s playing a character,” attorney Randall Wilhite argued at a pretrial hearing, according to the Austin American-Statesman. “He is a performance artist.”

Over the next two weeks, a Texas jury will decide whether Jones’s “performance” reflects who he is in private life, and whether that has any bearing on his fitness as a parent. His ex-wife, Kelly Jones, says there is only one Alex Jones, and his on-air persona is part of the reason that she should have custody of their children. Their 14-year-old son and 12- and 9-year-old daughters have lived with Alex Jones since they divorced in 2015.
Click to expand...

Gold Member
Joe Rogan insists that he's actually like that, and they're on the record good friends. On the podcast they did, he certainly came across as 100% genuine. The hilarious, over the top ranting is probably for ratings though, I guess.

Orthodox
His ex-wife is indeed Jewish:

I really don't know what to make of Alex Jones. I've only recently started listening to his radio show, and he has a history of dropping confirmed truth bomb after truth bomb -- and while, yes, he's clearly developed a persona which has great entertainment value, I find it hard to believe that someone who's gone as far down the rabbit hole as he would have you believe so readily dismisses the "Jewish question". It's hard not to connect the dots once you begin to develop a basic understanding of history and talmudism's role in shaping our current world.

Side note -- watched Passion of the Christ yesterday in honor of the Easter holiday, and couldn't help thinking to myself, the Pharisees haven't changed a damn bit. Same shit, different millennium.

I want to believe Alex Jones is who he says he is, and that his defense of Judaism is calculated to avoid being labeled and dismissed as anti-Semitic -- similar to how Gary Allen was sure to state up front, in None Dare Call it Conspiracy, that new world order globalism and Judaism have no correlation. But there are definite red flags with respect to AJ, including who pays his salary, that I can't get past. Not to say there's zero value in him if he's compromised, but I do take his sometimes insane ramblings with a grain of salt.

Orthodox
Gold Member
No one pays his salary. He owns the company, which is funded by their products and ad revenue.

Roosh said:
Alex Jones is going through a divorce. His ex-wife wants to divorce rape him for $7 million. The reason? "Emotional distress."
Click to expand...

To be honest, if any bitch had a reasonable claim to "emotional distress" in this day of no-fault divorce, it'd be Jones' ex wife.

Seth_Rose said:
No one pays his salary. He owns the company, which is funded by their products and ad revenue.
Click to expand...

I assume most of his revenue is royalty income from syndication with iheartmedia, Sirius XM, etc. as opposed to sales of caveman bone broth with CHAGA MUSHROOM. My point being that someone is permitting him to reach a wide audience via their radio network.

Nice find Roosh.
That video above where he talks about his wife, is with the radio talk show host Howard Stern who is also jewish.

I had conflicting thoughts about whether Alex Jones was controlled opposition or not for many years now.

After he recently publically apologized and totally backed down from the pizzagate child abuse issue, and now this revelation about his ex wife's religion, I am afraid that Jones is proving to be nothing more than a small time "Emmanuel Goldstein" type character from the novel 1984.

Meaning he is indeed controlled opposition.

Catholic
Gold Member
Infowars crew has its "Shut it down!" moment, sidestepping and cutting off a woke caller:

Gold Member
He is a fraud.

Orthodox
Infowars staff got nervous and approached "shut it down" levels when a female caller tried to bring up the JQ. The producer was brought in to deflect from the caller.

Banned
Its obvious to all that this is a subject Jones wont touch now, but in his defence he does go 90% of the way there and then lets the listeners figure it out for themselves.

He used to talk about it as illustrated here:

My guess is that he was bought off but a lot of the information is good, JQ is the fast lane to getting wiped off the net in the current climate.

This interview he was owned, I think he probably hated himself after but the mans got a business to protect, I cant blame him:

Banned
AJ knows what's up. He just doesn't want to openly bring up the JQ because it might hurt his viewership and/or career. It's a smart move at the end of the day, and I don't think he's a "fraud".

Besides, you should be able to put two and two together whenever you hear terms like "globalist" or "bankers". His job is to point people in the right direction, not spoonfeed them.

Roosh said:
Infowars staff got nervous and approached "shut it down" levels when a female caller tried to bring up the JQ. The producer was brought in to deflect from the caller.

Another vote for controlled opposition here, which again doesn't mean he doesn't drop truth bombs from time to time. But its a limited hangout.

Back when TARP was being discussed in Congress Jones was publicizing "secret FEMA" detention camps. I don't know if these existed but he certainly had the effect of scaring his awake listeners. That sort of knowledge (propoganda) is more effective when you think you think you discovered it and its secret knowledge rather than something the government is paying to shove down your throat.

I don't how he keeps a straight face, the things he says have me laughing my ass off.

ScrapperTL said:
I'm a big fan of Alex Jones and Inforwars, check out his interview with Red Pill's very own Mike Cernovich here @ 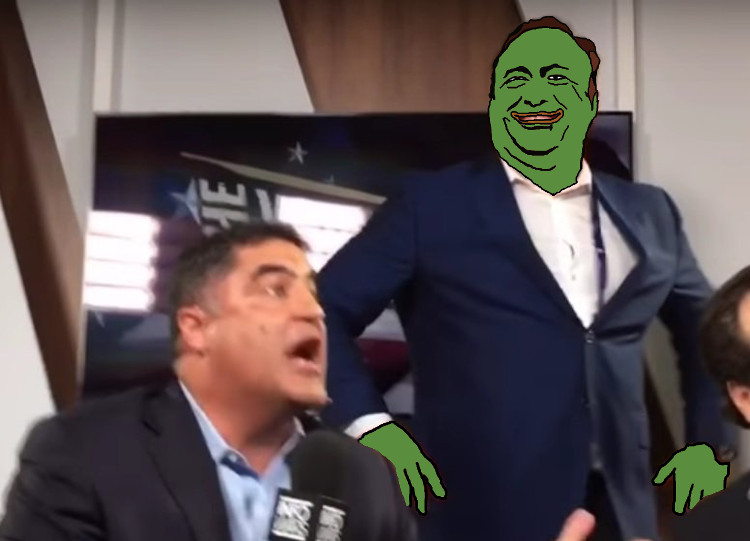