Expect it to be completely cancelled by 2030. They've been slowly doing it with lockdowns - must be taking too long.

Orthodox
Gold Member
Biden is expected to give a press conference tomorrow on COVID agenda. Remember Andy Slavitt's tweet back on August 11, 2021. He was part of Biden's COVID Response Team. 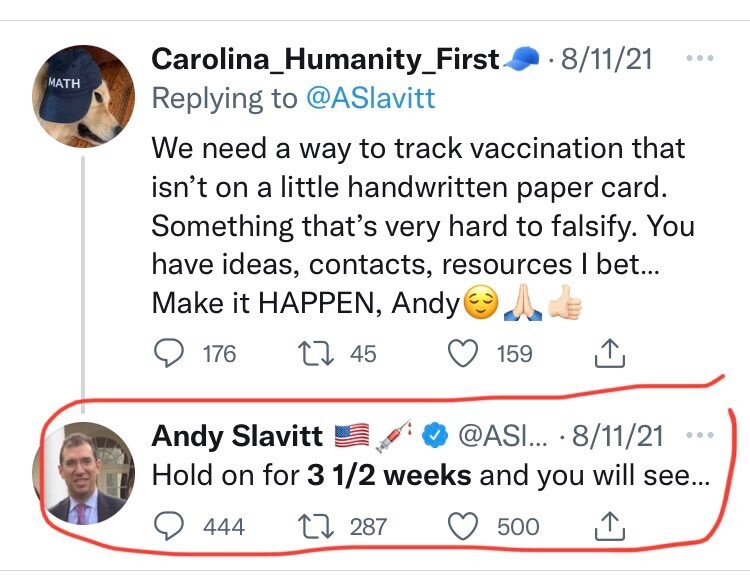 Strange I couldn't find any information on this from TGP. Go figure I'd find it on ZH.

Top comment:
Lol, we can’t force you to get vaccinated but we can force your employer, your church, your doctor, your local government, your DMV, your local merchant, your local restaurant, gym, car dealer, gas station, your schools etc to force you.

Another interesting comment:
That's what they've done in France, and it's failed spectacularly as everyone has just quit.

We'll see what happens but the controlled demolition of our economies and societies at large continues.

They can not let up on this so-called covid war. There no going back. Always view this through the lense of economic and financial destruction.

Time to get off your asses and do something.

rainy said:
Time to get off your asses and do something.
Click to expand...

GOP will do something - they'll say that the spytech companies like CLEAR who will implement the movement passes are paying TOO HIGH OF A TAX RATE!!!!11!!!1!11!!!

Time to get off your asses and do something.
Click to expand...

I have no expectation that the GOP will resist the Leftist totalitarians at all. They are total sell outs.
E

homersheineken said:
Expect it to be completely cancelled by 2030. They've been slowly doing it with lockdowns - must be taking too long.
Click to expand...

Objectively speaking, minorities were not part of the forming of the constitution. Time for a new constitution, right?. I think this will start to be discussed seriously after Biden resigns at the 2022 State of the Union.

Thomas More said:
I have no expectation that the GOP will resist the Leftist totalitarians at all. They are total sell outs.
Click to expand...

Dude cmon how did you miss Zioclops Dan Crenshaws latest ad where he jumped out of a plane?!?! that's what he's totally gonna do to these dems! Just wait and trust the plan dood we're gonna own them - they r the real racists!!

Protestant
His own people mute his speeches.


They also spend a lot of time playing Harry Potter. We should expect at least one Benghazi or Afghan withdrawal per Democratic term since they act like this.

Some people in the Biden administration are huge Harry Potter fans.

We’ve previously noted that Attorney General Merrick Garland is a Potter-obsessive. But a group of staffers on the White House press team have taken it to a new level: taking an online test to determine the form of their patronus (it’s like their magic spirit animal; if you want to know more read here).

Assistant press secretary Emile Simons took it upon herself to post pictures of the press team’s patronuses in a collage above her desk in the West Wing. Some of the results:

Deputy press secretary Chris Meagher is technically a bear but Simons changed it to be a picture of a teddy bear dressed as a wizard — wand and all.

Countdown to 25th amendment in....

Pretty much. We're in the end game now.

It'll all fall out similar to when fuel prices spike from $2/gallon to $4/gallon, then when everyone complains, it drops down to $3.10/gallon and everyone's happy.
"Hey, at least it's not $4 a gallon."

Heels Up will nix some if not all of what Bitem said last night. But she'll still want to enact some sort of measures. Covid passports or whatever else, but nothing close to what the old man wants to do.

"Hey, even if we have to carry a vax passport and can't use cash anywhere anymore, at least we don't have to get the vaccine."
B

Maybe she knew what she was saying.
But then again..
I think she was talking about Texas Abortion laws.
Her brain may not cross reference as well as ours. After all, illegal immigrants don't have to be vaccinated and that's all fine.
They are quite happy holding the contradictions.

What with Oz etc. I think we're seeing them go all in.. whether Kamal-Toe or Sleepy Joe it will be full steam ahead. 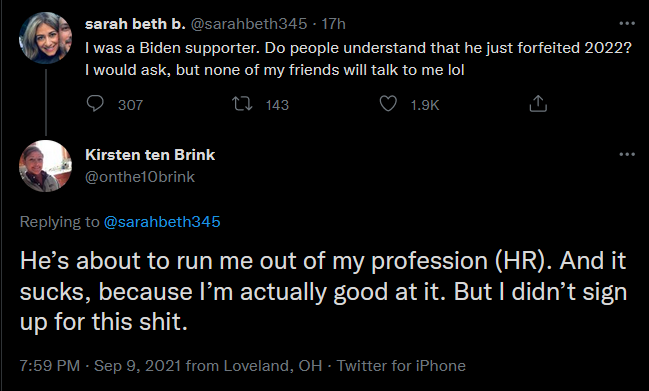 Heels up Harris has committed the cardinal sin:

Easy_C said:
Heels up Harris has committed the cardinal sin:

Her days are numbered now me thinks.

Her days are numbered now me thinks.
Click to expand...

The globalists seem to like her. Apparently, they don't give a rat's patootie about Israel, I guess because most of the globalist tribe members are in the Reformist faction, which disapproves of Zionism. Remember, Tlaib and Omar were re-elected in spite of their anti-Israel statements. The Jews have a code of silence about their internal squabbles, so if the pro-Israel/Zionist Democrats reject her, we may not hear about it.

Orthodox
I need to censor some information to not doxx myself but someone very close to me who works as a labor and delivery nurse, had a pregnant Afghani woman who was settled in a nearby military base come in and deliver a new US citizen. She came in with her "husband" who was escorted by a soldier. The husband needed to go out for a smoke, he booked it, and they don't know where he is now. This nurse tells me there are 1200 pregnant Afghani women at this base. Another person very close to me tells me there are about 10,000 Afghanis settled at the same base, when the official number is less than a thousand. Military reservists at this base have to telework their drill now because the base is too full for them to drill.
Share:
Twitter Email Share Link
Top