ROME — People’s “gender identity” is given to them by God and is directly tied to their biological sex, the Vatican has declared in a major catechetical text published this week.

A fundamental problem with modern gender theory is that it denies a core biblical truth, namely that God creates human beings “male and female,” states the new, 300-page Directory for Catechesis published by the Pontifical Council for Promoting the New Evangelization.

The new Directory echoes the sharp criticism of gender theory voiced by Pope Francis over the years, which has earned him the derision of many LGBT activists.

In 2016, the pope published a lengthy teaching text on marriage and the family called The Joy of Love (Amoris Laetitia) in which he underscored the unique value of motherhood and fatherhood, neither of which is dispensable or replaceable with a unisex version of “parent.”

In that document, Francis slammed gender theory for its denial of “the difference and reciprocity in nature of a man and a woman,” and for its dream of “a society without sexual differences.”

“An appreciation of our body as male or female,” he said, is “necessary for our own self-awareness in an encounter with others different from ourselves.” Efforts to cancel out sexual differences based in anatomy are a symptom of a sick society that “no longer knows how to deal” with sexual differentiation, he wrote.

The following year the pope issued a similar condemnation, denouncing what he called the “unisex utopia” of the LGBT lobby.
Click to expand...

Moderator
If you aren't already, now is a great time to get involved in your parish. Specifically with the ushers/security group or Knights of Columbus. Churches and Catholic statues are being targeted by antifa/BLM. You don't want to get caught with your pants down. Plus, this is a great way to meet other red-pilled men (vets, cops, etc.).

“It is better to be a warrior in a garden than a gardener in a war.”

Good stuff to consider in that clip.
I second that notion that the KoC are an underappreciated means for catholic men all across the US to get involved in their communities and is ripe for being taken over by younger red-pilled guys.
I became third degree in my mid-20's in your typical suburban parish, and they were more than thrilled to have young blood who participated with them in their social and charitable activities.
If I stuck around, there is no doubt they would have tried to get me to become the Grand Knight within ten years, and I'm pretty sure they are struggling to get former GK's to take on the job again now.
I think most younger guys view the KoC as a drinking club for aging boomers and war vets, which it is, but most of those folks are good salt of the earth blue collar types, who do have life experiences worth learning from, and potentially great connections in their communities.
Actually, it was a little bit of a downer to learn how many of those types really are the living legacy of the sixties, and basically think America is nothing but a force for good in the world, but basically they side with the right on the mainstream culture wars issues for the last couple of decades, so while it typically will surprise them you hold more conservative views than they do, they will not be unwelcoming because of that.
With all the talk of parishes closing in the near future, these sort of groups will be sure to go first, so they are absolutely ripe right now to be taken over by young guys to reshape them.
The KoC has plenty of warts now to keep red-pilled men away, but if enough good men start putting these groups to real work, the organization will eventually be forced to listen to its constituency if it wants to continue to exist.

Gold Member
This was the same Catholics group that were attacked by rioters/protesters in St. Louis.

A Catholic priest got suspended for criticizing Black Lives Matter. 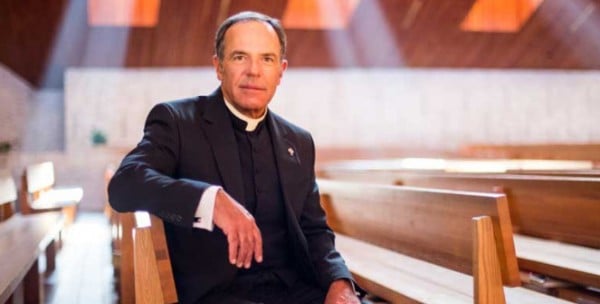 A Catholic priest in Indiana has been suspended by his diocese for condemning the organization Black Lives Matter his weekly message last Sunday.

A priest is given the boot for criticizing BLM from the pulpit. A dangerous precedent. More placating to the crowd. Is the Catholic Church asking for its Churches to be burned like Democrats ? Do they want the mob? So disheartening, to see such weakness in the bishops, first to Corona and now to BLM.

"The Bishop expresses pastoral concern for the affected communities," the diocese said in a statement Wednesday, reported the Indianapolis Star newspaper. "The suspension offers the Bishop an opportunity for pastoral discernment for the good of the diocese and for the good of Father Rothrock."
Click to expand...

NoMoreTO said:
A priest is given the boot for criticizing BLM from the pulpit. A dangerous precedent. More placating to the crowd. Is the Catholic Church asking for its Churches to be burned like Democrats ? Do they want the mob? So disheartening, to see such weakness in the bishops, first to Corona and now to BLM.