The Coming War with Iran

Twitter thread. Some background info on US policies and stances on Iran from the 70s onwards

At one point the US was allegedly ready to hand Lebanon to Hezbollah, Syria to Assad, Iraq to the Shia and make Iran the sole regional power in the Middle East. And dump the Saudis in the process. The conditions: 1. recognize the USA as the sole global hegemon and 2. recognize the state of Israel + sign the peace treaties

Assassination of the nuclear scientist was allegedly done by rogue IRGC members. They successfully fled to Israel afterwards


Also, the 2015 nuclear deal is still on the table it seems. For now things don't seem to be moving.

Rocket attack on US base in Erbil, Kurdish Region of Iraq


Unrelated but in the same region. Botched Turkish rescue operation results in 13 executed soldiers/policeman (by the PKK)

The Saudi war effort in Yemen is crumbling. The Houthis are at the gates of Marib, which is a strategical and symbolic city in the center of the country. It's only a matter of time before the US will assume a more pro-active stance. They did however revoke Ansarallah (the Houthis) from their terror list. A genuine WOW from me

I expect the Houthis to encircle Marib from the South and North to create enough incentives for the Marib tribes to ditch the Coalition, and hand over the city without much bloodshed.

"The reason US reversed their decision to classify Ansarullah as terrorist organization isn't because they are morally motivated, but because it would have isolated US themselves from playing any future role as Yemen has become a strong nation and if the American administration has any moral values, it would have renounced its classification of Palestinian resistance groups as terrorism first."

"It's wrong to consider the US decision as a blessing wished for us, like how Pharaoh did with Moses & said "Didn't we mistaken you as our child but stayed with us longer", Moses replied "It's a blessing you wished for worshiping the Israelites. Hence we say the same thing to America: Is this a blessing you wish we had for you to attack, besiege and starve the Yemeni people?"

Secretary Antony Blinken
@SecBlinken
US government account
· 12 Feb
Effective February 16, I am revoking the terrorist designations recently imposed on Ansarallah. We must deliver humanitarian assistance and commercial imports into Yemen. We remain focused on Ansarallah’s malign activity and are identifying additional targets for designation.

Tony Toh
@tonytohcy
·
23h
Whatever dude, nobody in Yemen still gives a shit about this as long as the US is still allowing Saudis to impose sea and air blockade and Saudi bombings still continues. Just cut the BS and do the ACTUAL right thing.

Yonas Nigussie
@Yonigussie
·
11h
#UAE is dismantling part of its military base in Assab, #Eritrea. The UAE used the port and airstrip in #Assab as a base to ferry heavy weaponry and troops into Yemen. The drone hangars have also been destroyed after allegedly being used in #Tigray.

But the most interesting part people don't realize is Yemeni Army & Houthi forces have also opened a new front at SE Sirwah in Wadi Dhanna. They are pushing through in order to cut off main supply using #Marib-Harib highway.

As what I've expected many months ago: Storm the Al Jubah highway (connecting between Marib and Harib), deny Hadi/Islah supply route for Muradi tribes in southern #Marib front (Jabal Murad-Al Jubah-Rahabah). Then reactionary elements will finally gets besieged. 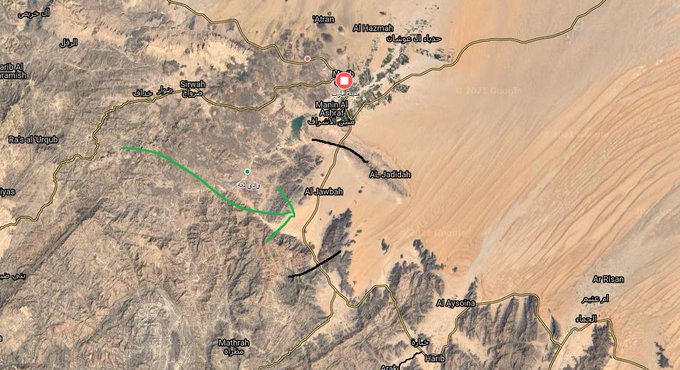 Marib is just the beginning...

And finally Socotra and Bab al-Mandab...

So-called military analysts or Western-based OSINT should NOT underestimate Yemenis capability to travel far to Yemeni islands like Zuqar, Perim and Socotra. You don’t want to mess with the Yemeni Naval Forces in near future when the war in mainland Yemen is over.


spriters
@neccamc1
·
14h
Isis announces its participation in the battles of Marib against Yemeni army.
we have known this since day one, al-Qaeda is also involved. So the army of Saudi Arabia, the Hadi army (National Army), with Isis and Al-Qaeda want to rule Yemen.

An Israeli/British affiliated roll on/roll off ship just exploded in the Gulf of Oman. Clearly it's in Iran's best interests to start a war with NATO and Israel's puppets, no way this is a false flag.

Please pray and if you're still on social media mock this attempt to get us into another war.
B Look at the body language, Bibi bossing Sleepy Joe, who is looking meek, mirroring him, and is also dressed like an Israeli politician (no necktie).

Biden started out thinking he could revive Obama's Iran deal, which was actually pretty good, Trump only scrapped it because he's also Bibi's b1tch. It only took a couple of days for Biden to buckle.
Click to expand...

Bibi: If you attack Iran they will welcome your boys like liberators with flowers and garters.
Sleepy: *drools* Ahhh isn’t that what you said would happen with Iraq?
Bibi: It did, it did, don’t you remember?
Sleepy: Ah what, I thought we got fucked until we started bribing the Sunni militias to stop attacking our boys.
Bibi: Joe you need your meds.
Sleepy: *Dr Rachel Levine slips Sleepy something* Ahh yeah Bibi I remember all the flowers now, I’ll give the order.
Bibi: *Clasps his hands and rubs them together frantically* Excellent, the Shabbos goy will once again do our bidding and our final near enemy will fall… *stiffens intensely*

Things are heating up in the Middle East (and the Ukraine, but that's a different matter)

*Israeli tanker attacked in the Gulf of Oman

* US airstrikes in Syria on Kataib Hezbollah (Iraqi Hezbollah)

There is no way the U.S. is going to declare full-on war with Iran. Not anytime soon. There's no upside in this for Biden. Only thing that will keep happening is the occasional drone and missile strike in Syria. Yemen is irrelevant no matter who wins there.
B

wannable alpha said:
There is no way the U.S. is going to declare full-on war with Iran. Not anytime soon. There's no upside in this for Biden. Only thing that will keep happening is the occasional drone and missile strike in Syria. Yemen is irrelevant no matter who wins there.
Click to expand...

It seems to me that despite all the vitriol towards Iran the US, Israel etc. have adopted a strategy of containment, economic warfare and proxy war against Iran. I think they do want to knock off Iran but their reluctance signals that they may not be totally confident of doing it without serious costs. With that said, I think one day they will probably go after Iran militarily if they cannot eventually dislodge their leadership. Maybe, though, they can find a different way to control them through their covid global tyranny. Who knows with these demons?

wannable alpha said:
There is no way the U.S. is going to declare full-on war with Iran.
Click to expand...

Noone is asserting the opposite.

wannable alpha said:
There's no upside in this for Biden.
Click to expand...

Biden? They just alienated half their domestic population by blatantly stealing the elections and are now in the process of alienating the other half as well with a sea of broken promises, war-mongering and economic collateral damage

As for a war on Iran: it would benefit the globalist banksters, their allies in the region and the MIC.

wannable alpha said:
Only thing that will keep happening is the occasional drone and missile strike in Syria.
Click to expand...

These are the same people that during the last 5 years of their reign staged a fake chemical attack, pursued a devestating economic (sanctions) war, enabled a foreign (Turkish) invasion, worked side by side with genocidal headchoppers of flavour A (al Nusra) and gave the headchoppers of flavour B (ISIS)* a carte blanche to what they wanted as long as it was hurting the Axis of Resistance +Russia

*leaving the birthing of ISIS at the US held Camp Bucca (+ consecutive release of all IS leaders) out of the equation here as that is another story.

Now, a mere one month back in power these same dogs have started barking like they did in 2011-2013, have started dropping bombs again and have re-started their media offensive but somehow nothing will change?

wannable alpha said:
Yemen is irrelevant no matter who wins there.
Click to expand...

Hate to be blunt but that's an ignorant comment.

1.If the Houthis win Iran will get access to the Bab al Mandeb Strait. I believe it's the third most vital maritime choke hold worldwide (after the Strait of Malaka+ Strait of Hormuz). It's very easy to mine such a narrow strait in the case of war, thereby bringing international shipping through the Strait to a standstill.

Couple of hours ago the Houthis send ~10 explosive laden drones + several missiles towards Saudi oil ports+ the capital Riyad again. Patriot AD took some out but others hit their targets

Also important: after the attack on the Israeli tanker the Russians escorted an Iranian oil tanker through the Suez Canal

60 Minutes covered the Iranian missile attack on the Al-Asad US base in Iraq last night. From what I can gather/guess, the missiles were probably more accurate that we thought they might be in real time, even though we had evidence that they would be this accurate.

I think it scared the western elite and made them throw in the towel on a conventional war on Iran and instead settle for proxy war in Iraq and Syria and they can push degenerate culture into Iran through any opening they can find. 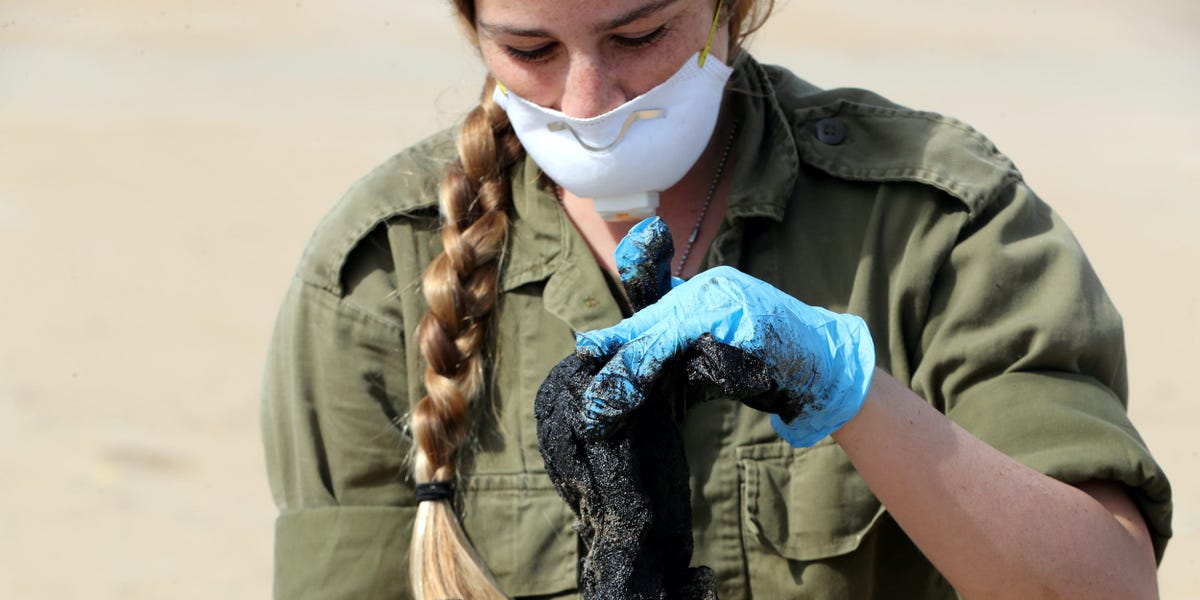 President Biden and allies in Europe are worried a revenge attack might scuttle nuclear talks with Iran.

Houthis inching towards Marib. You have got to respect these MFers. Khat chewing, malnourished, flipflop wearing dwarves that haul their heavy gear towards the front on their backs in the scorching sun whilst being exposed to Saudi airstrikes. They are fighting mercenaries from all over the globe, several militaries and a wide variety of Yemeni militias. Heavily outgunned and completely cut off from the world

And they are winning. Tough as nails. Do not mess with them, they will f*ck you up.


Houthis are now bombing Saudi military sites +oil infrastructure daily. Below is a picture of the Aramco oil refinery that got hit.

Word on the street is that the Saudis+Emiratis are tired of this and want out. Negotiations are on the table. Houthis stop incessant missile/drone attacks and the Coalition lifts its blockade. Rumour is that Russia will lead the negotiations. Best believe that Uncle Sam will be mad as hell, they want to curtail Iranian influence everywhere.

Attack on an oil facility


Launch of the Zulfiqar missile (based on the Iranian Qaim missile) . Drones are of the Qasef type.

Oil facilities (presumably) after being hit

For the fourth day this week Jeddah Airport was affected

Why do Arab national armies suck at fighting anything and everything?

dicknixon72 said:
Why do Arab national armies suck at fighting anything and everything?
Click to expand...

All the money and advanced weaponry in the world can't make up for having a populace with a lower IQ than American blacks.

Oil is going higher and this will follow more attacks. Its good for the MIC and Gulf states.