Gold Member
Hilarious about all the controversy over Chappelle's new special. He made a joke concerning Michael Jackson, how he didn't believe the accusers. He made almost the exact same joke about MJ 12+ years ago, when everyone thought it was hilarious, and no one cared back then.


He's also made the same statements about not believing police, not believing R Kelly, Bill Cosby, OJ, etc are guilty, that's pretty much his recurring schtick at this point. He made a whole sketch about how he would be a skeptic in any celebrity trial jury.


*That piss was digital*

^That is fake news. Rotten Tomatoes shows 79% and 90%, respectively.
K

Oh, my bad. I still thought Sticks and Stones was hilarious especially with the Jussie Smolett bit.

Where are you getting that? The page says 17 percent approval from critics and 99 percent from the audience. I'm talking about the ratings specifically for "Sticks and Stones."

Reading the reviews from Paste, Playboy, and other places I got the unsettling feeling that it's a bunch of white people telling a black man what he should and should not say.

And there reviewers that un-self aware that they don't see this?

The Paste one is the worst. It starts out with the writer reminding everyone Chappelle is a multi-millionaire up front. Are Taylor Swift and U2 records reviewed that way? No. How much of this is veiled racism from the left?

The left seem real comfortable when they're helping impoverished minorities. But reading the Paste review, you wonder how much the writer Garrett Martin resents the fact that a black man is out-earning him.
B

Brilliant. Only wish he spent another 5 minutes on it.
Click to expand...

If you have not seen the whole special, he definitely spends a few more minutes on it.

Where are you getting that? The page says 17 percent approval from critics and 99 percent from the audience. I'm talking about the ratings specifically for "Sticks and Stones."

Reading the reviews from Paste, Playboy, and other places I got the unsettling feeling that it's a bunch of white people telling a black man what he should and should not say.

And there reviewers that un-self aware that they don't see this?

The Paste one is the worst. It starts out with the writer reminding everyone Chappelle is a multi-millionaire up front. Are Taylor Swift and U2 records reviewed that way? No. How much of this is veiled racism from the left?

The left seem real comfortable when they're helping impoverished minorities. But reading the Paste review, you wonder how much the writer Garrett Martin resents the fact that a black man is out-earning him.
Click to expand...

debeguiled said:
Cosby
One of the best for sure with a legacy tainted by unrepentant predatory nature. I still believed him when it was only 20 accusers. The numbers just kept going up. It is hard even to think about him other than to say I loved his early albums.
Click to expand...

He has money, and more women want a part of it.

Having worked Hollywood-adjacent, I still believe that every one of those women wanted it to happen. I've seen women have sex with a no name film school student just for an invitation to an industry party. Is it so hard to believe that a man who was once so powerful in TV that he was considering buying NBC would have women throwing themselves at him? A man who was being courted by all of the investment banking firms would have women provided to him?

Now they get to call the experience rape to get a payday. It's BS and he should be a free man.

I had no idea who he was (not big in the UK) until I watched the new Netflix show last night (after reading this thread). He was absolutely hilarious! I laughed like a drain from beginning to end. It was as if he's been sitting with myself and my work colleagues for the past few years listening to our conversations and making them into standup!

On the subject of other great comedians, I'm glad Robin Williams got a small mention above, 'cos even though he's not to everyone's taste, there's no denying his genius, his ad-libbing in particular. Sometimes it was to his detriment, because instead of laughing you just found yourself watching him in awe.
R

Caught the sticks and stones special last night. I think he made some interesting points but it wasn't nearly as funny as his earlier material. I'd give it a 3/5 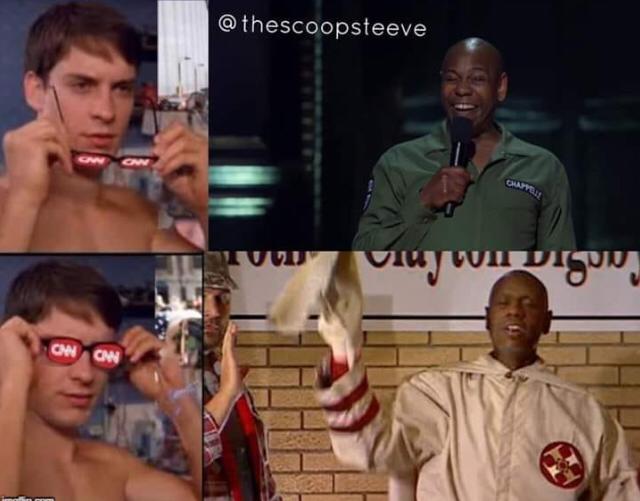 A NOT-SO WELCOME HOMECOMING — DAVE CHAPPELLE made a surprise stop by D.C.’s Duke Ellington School of the Arts on Tuesday in the latest chapter of the running saga with his alma mater.

But if the self-proclaimed GOAT hoped to smooth things over amid the backlash over his jokes about transgender people, he was in for a surprise of his own.

Some 580 students packed into an auditorium to hear their school’s most famous alumnus discuss the uproar triggered by his Netflix special “The Closer.” With a camera crew in tow, Chappelle took the stage to a raucous reception of cheers and some boos — and the hourlong session went south from there, we’re told.

During a Q&A session, one student stepped to the mic and called Chappelle a “bigot,” adding, “I’m 16 and I think you’re childish, you handled it like a child,” according to two students present. The comments were confirmed by Chappelle’s spokesperson CARLA SIMS.

NO APOLOGIES: Chappelle responded, as recalled the next day by the students, “My friend, with all due respect, I don’t believe you could make one of the decisions I have to make on a given day.” That peeved some students who were hoping for an apology or some semblance of one from Chappelle.

In response to another antagonistic question, Chappelle roughly told the student body of artists: “I’m better than every instrumentalist, artist, no matter what art you do in this school, right now, I’m better than all of you. I’m sure that will change. I’m sure you’ll be household names soon.”

The students recalled that another student in the audience shouted at him, “Your comedy kills,” and Chappelle shot back, “N------ are killed every day.” He then asked, “The media’s not here, right?”

ONE DISTURBED PARENT: The two students we spoke to declined to go on the record out of fear of retribution from the school. The father of one of the students, who also declined to speak publicly to protect the identity of his daughter, said, “As a parent, I have to say I have a real problem. … He was being dead serious and using the n-word on the record. What kind of judgment is the school showing to allow that?”

Sims, the Chappelle spokesperson, responded: “They are complaining that he talked and said the n-word. If anything, Dave is putting the school on the map.” Chappelle has raised hundreds of thousands of dollars for Duke Ellington and brought A-list celebrities such as BRADLEY COOPER and CHRIS TUCKER to its campus.

The two students who spoke to Playbook said they were afraid to speak up at the assembly because Chappelle often laughed at students’ questions or responded with jokes. At one point, after a student left the assembly room, Chappelle singled her out by saying, “Of course she left early.”

Sims said that person “couldn’t even entertain the idea of a conversation.”

Some students were equally put off by Chappelle.

“He could tell we were nervous,” said one of the students we spoke with. “It was a huge power imbalance of this grown man and his camera crew — and these 14- to 18 year-olds without their phones, just high school kids.” Students had to lock their phones in special pouches beforehand to prevent recordings.

A spokesperson for the school said that about eight students came forward to ask questions.

“During the conversation with students and staff, Chappelle specifically invited the voices of discontent to ask questions, however as a result, the supporters of Chappelle became the silent majority,” said Duke Ellington spokesperson SAVANNAH OVERTON.

“Our principal was approached by several students after the assembly who were disappointed that they were not able to voice their support for Chappelle in this forum.”

NO HARD FEELINGS: According to the students, Chappelle seemed to soften up as he wound down. Turning to the camera, he spoke out against death threats some students have received since protesting him. The school has responded by increasing security and barring students from leaving campus for lunch.

“His whole tone changed,” one of the students said. “He said, ‘This is my family and whether they know it or not I love these kids. … I don’t want to hear about any threats to these kids. These kids don’t deserve that.’”

“He was really kind,” the student added. “If [only] he [had] acted that way the whole time. … There was no reason to be mean to us. He was just laughing at kids.”

A PARTING GIFT: Sims said Chappelle was expecting forgiveness from students, not to offer an apology of his own. The school postponed an event to name its theater after him amid concern about student reactions to his special.

“He said these kids deserve an F for forgiveness,” Sims said. But, “Give them some space to grow. They are going to say things that are immature.”

On his way out, Chappelle gave three tickets to each of the students for the screening of his documentary “Untitled” at Capital One Arena that night and 600 Thanksgiving meals for students and staff.
Click to expand... 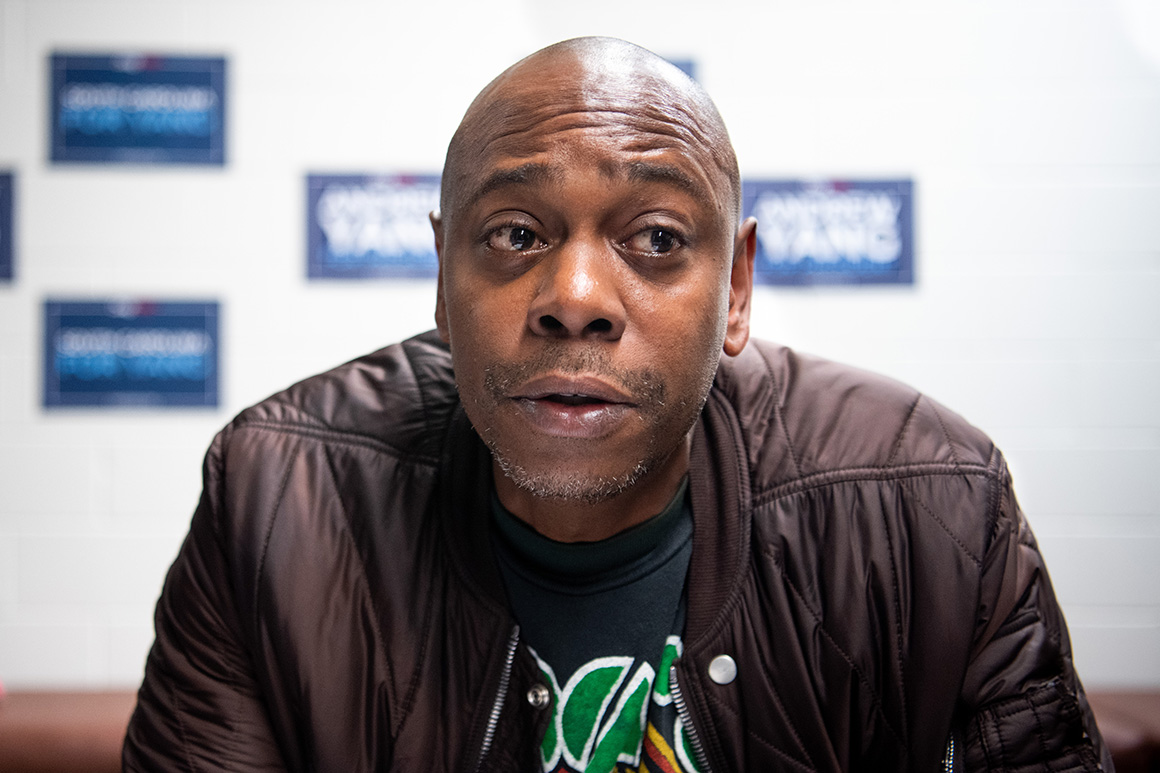 And Ahmaud Arbery’s killers are convicted.