Gold Member
See, if the mullas were not in charge, I would not have a problem with any of it.

As it stands, the mullas, who believe they are preordained to bring about the end of world so that the hidden imam al-mahdi can return, are constructing their nuclear program to build nuclear weapons.

In the meantime, the USA is the great satan, according to Iran. the "death to america" chants are well documented above. Whether the deep state organized Khomeini's return or not, the result was an attack on US embassy and held Americans as hostages for over a year, after which Iran and America became sworn enemies.

Israel--I don't want to fight any of their wars. I also wish the Israelis would be allowed to fight their own wars and defend themselves. Instead, the Europeans lose their shit anytime Israel retaliates. When Israel tried to bomb Iranian reactors, and Saudis gave them the go, Obama declassified Israeli nuclear program.
Had that happened, we wouldn't even be having this discussion right now.

To recap--I oppose giving money to religious fanatics who want it to finance their nuclear program so they can bring about a nuclear apocalypse.
The US Democratic party officials who worked out a deal beneficial to America's enemy, while getting nothing in return, were wrong and must be considered Iranian assets. Especially when they continue to work against the current administration.
Once the present Iranian regime is gone and Iranians install a normal government, any financial and otherwise assets Iran has in US can go back to them.

Gold Member
The blog in your first link is just hyper-paranoid speculative junk. Other than some blah-dee-blah religious rhetoric thrown out for the masses do you have any actual evidence that the Iranian leadership is going to attempt to cast the world into a nuclear apocalypse?

Not that their piddly little program is capable of that outside of a Tom Clancy fapfest, but do you have the evidence anyway or just speculation?

I seem to recall for decades we were told that as soon as North Korea built a nuke "it was all over". Then it was "we can't let them build a viable missile". Now it's just the usual disarmament rhetoric.

Where is the hard evidence that Iran wants a nuke for any reason other than defending themselves against multiple hostile nations, Israel in particular, who want them exterminated? What in the hell happened to Occam's Razor?

So do we still feel the Democrat Party is imploding? They seem to have recovered nicely and are comfortably shifting into this new direction with Progressives and Democrat Socalists replacing the classic liberals or whatever they liked to call themselves. Heck they even gained the house last election. And their field of potential candidates for the presidential run is the size of an ocean, full of vibrant diversity and vaginas.

Seems to me the Dems have gone with the plan they've long had in anticipating of the demographic change, probably a little earlier than they planned because of Trump. Will the sleepy silent majority go for this new look? I think we have one or two more presidential elections before energizing the base will no longer save the Republican party. God knows they won't be staffing this Israel controlled Zionist party with Reactionaries and actual Nationalists to combat their counterparts. Once Trump is done they'll quickly dump civic nationalism and go back to neo-conservatism, not that it will matter at that point.
M

Gold Member
Here's a non-conspiratorial study, along with sources. https://www.meforum.org/1985/ahmadinejad-and-the-mahdi


Israel is not the one threatening Iran, but Iran regularly threatens Israel and USA, and has Hezbollah doing their dirty work for them.

I already showed you, Iran is ran by religious fanatics who think nuclear apocalypse is their destiny. North Korea is not a good comparison--they're not a theocracy. Although their stated goal was to reach US with their missiles.

Gold Member
The biggest threat I think the DNC faces is that the old blood has held power for too long and they're obviously as crooked as a three dollar bill. Like most of their boomer peers they refused to hand the baton on to the younger generation when the transition could have been smooth so now the new crop like AOC are gaining power while not having been indoctrinated into the way things are run, and by that I mean the complex system criminality that the party operates under.

This risks causing some extreme fractures in the party when the new blood doesn't behave as it should by quietly voting for measures that cause harm to their base on behalf of moneyed interests. All these new women ironically are also harder to entrap in honeypots with underage hookers and such. They're already getting their an overdose of their prime directive. Attention.

Gold Member
meforum.org is an israeli site. They're basically projecting here, which is a very common zionist rhetorical approach. Zionists are very good at shaping the perceptions of well-meaning Americans who aren't very knowledgeable about the middle east, going back to the Rothschild Scofield bible. The messianic/third temple project is a zionist project. The wahhabi/saudis as well are infested with eschatological nonsense.


In any case, Len is right, this is drifting deeper into off topic territory.

Gold Member
It's flat out ridiculous anyway. If the metric for "grind into submission" is "hostile desert tribe with supremacist ideology" then let's start with Israel. They've caused far more trouble for the goyim than the Iranians ever did and they have nukes already.

Leonard D Neubache said:
The biggest threat I think the DNC faces is that the old blood has held power for too long and they're obviously as crooked as a three dollar bill. Like most of their boomer peers they refused to hand the baton on to the younger generation when the transition could have been smooth so now the new crop like AOC are gaining power while not having been indoctrinated into the way things are run, and by that I mean the complex system criminality that the party operates under.

This risks causing some extreme fractures in the party when the new blood doesn't behave as it should by quietly voting for measures that cause harm to their base on behalf of moneyed interests. All these new women ironically are also harder to entrap in honeypots with underage hookers and such. They're already getting their an overdose of their prime directive. Attention.
Click to expand...

Maybe. I mean they did legitimately plot against and screw over Democratic Socialist Bernie Sanders so perhaps there is some fear there. On the other hand they had no trouble at all corralling Obama who was as much an outsider/disruptor as these all are, but with a seemingly aimless idealistic ideology he campaigned on. And Trump, to some degree, seems controlled given him firing all nationalists for neo-cons and longtime establishment creatures and this one way friendship with Israel and Netanyahu.

I think they'll be able to control AOC, Harris, Warren, Booker, etc. quite easily. They just reek of weakness to me. Though, part of me wants to see this crushing 70%+ tax on the elites and corporations just so they can finally get a taste of the consequences of what they're thrown their weight behind and forced down our throats. But we all know they'll get around it like always. And ultimately, as long as the demographic trend continues, it won't really matter.

I will have to say, it was funny to see the Democrats "bring up 30 year quote from high school" tactic used against Brett Kavanaugh happened to some of the top Democrats in Virginia. I had a good laugh and smile to see it backfire and used against them.
K

It's funny to see the Democrat's tactic of "Use 30+year high school quote" against Brett Kavanaugh to be used againist them with the recent scandals of some of the top Democrats in Virginia. It made me laugh and snicker a little.
P

Democrats are hypocrites, plain and simple. The leaders created a golem they thought they could control, but now the golem has developed a mind of its own and pursues its own needs and desires. Democrat leaders need to be reacquainted with the Frankenstein novel by Mary Shelley and understand what happens in the end!

I may have said this before in regards to the first post for the topic.

The Democrats never had a Plan B if they lost in 2016. They got drunk off of various things like recency bias from their victories in 2008 and 2012 and thought they would win until 2 decades later or all the time. They expected their opposition to continually be out-of-touch theocrats, they really believed their own analysts wet dreams of permanent rule from their fantasy books.

Then Trump came in and the rest is history.

I never really believed in the permanent majorty fairy tale some politicians believe in, things change. It could take months, years, decades, but nothing lasts forever.

Why is she asking chelsea clinton to do anything? The moron should be doing it herself like a big girl. 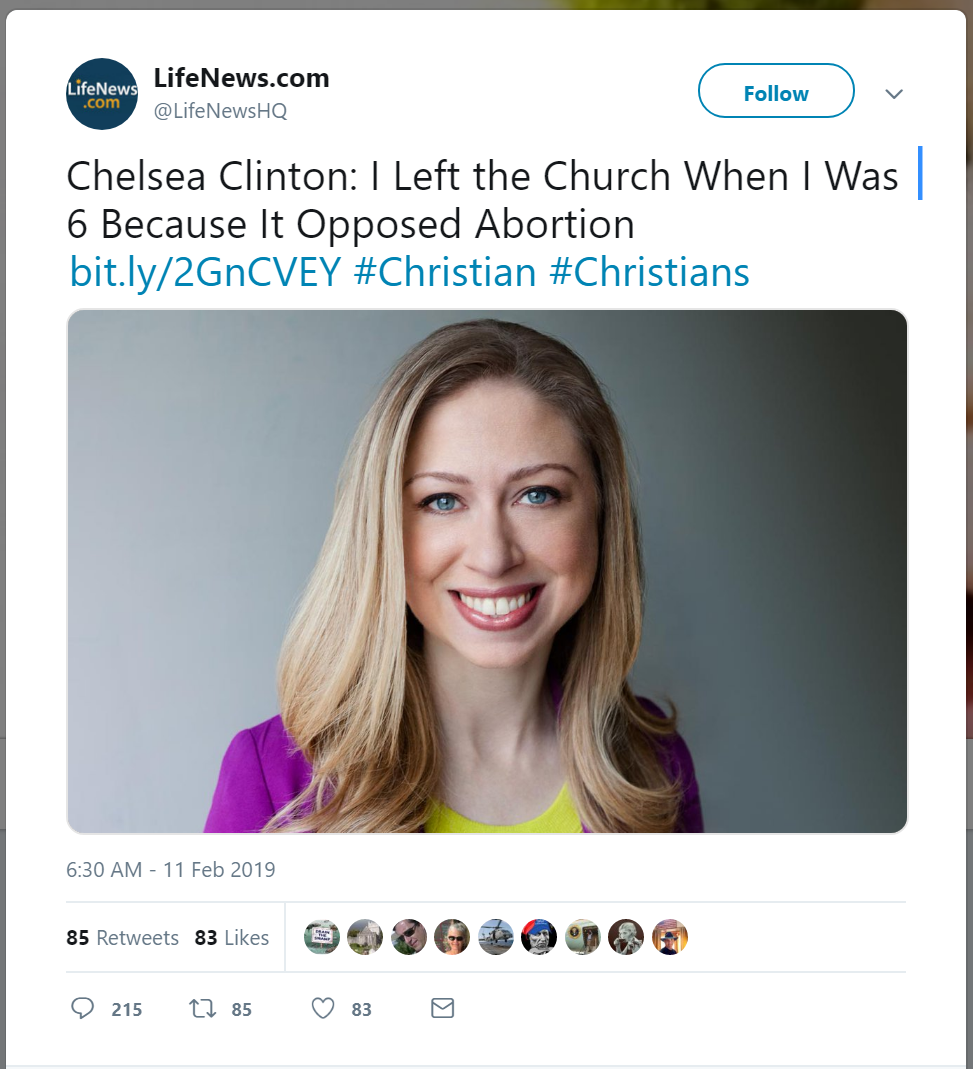 With these deluded ultra leftists and their kids - why is it always 6 or less?

Example: 'My six year old daughter cried when Trump won because she thinks we're going to be deported!'

'My three year old son is the biggest Kamala Harris fan out there and thinks she's the only chance to stop orange man!'

My nephew isnt even six he's almost eight and he (and his friends that I've met - and the kids not a dummy, he's an A or B student by whatever metric his school uses and asks a ton of good questions) know dick all about fuck anything aside from video games, what food they want to eat and some movies and music.

Why don't any of these insane leftists, or noted moron Chelsea Hubbell, ever say anything believable, like 'I made this choice when I was 11', or is that not sympathetic enough for the Democrat party who like children's supple young organs more than actual kids?

This outrage over Ilhan Omar's "anti-semitic" remarks is comical. We're getting wall-to-wall coverage of bi-partisan outrage all because Omar said that Jewish money influences US Politics. You can't get these clowns to agree on anything until you make a mild-mannered criticism of the almighty Israel.

A few days ago I was condemning this woman for getting involved with USAPL's transgender decision, but now I feel bad for her because she's only speaking the truth. It's not just Israel either, we have Saudi and MIC money influencing our politics.

As ass-backwards as Muslim ideology is, the Muslims may end up becoming an unlikely ally for the right. They're willing to take on the JQ, and their beliefs are starkly opposed to the insanity being ramped up by the left (gay agenda, trannies, girl power etc).