The (destruction of) CNN thread

Orthodox
Gold Member
Guy: "What are you gonna do? Box me out? You’re not tall enough.” 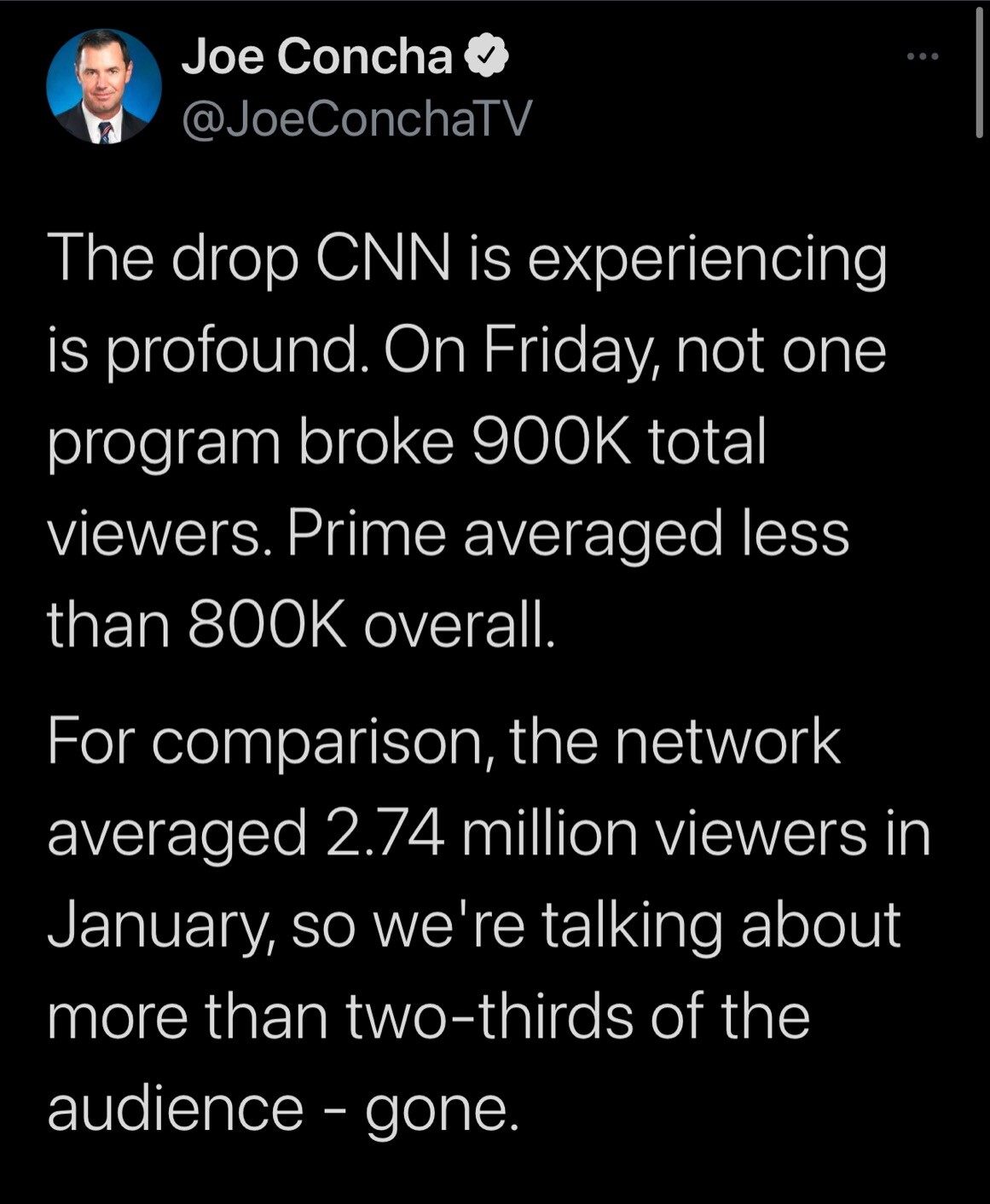 Catholic
Nothing short of the destruction of the liberal world order will kill CNN. Even if every television and smartphone disappeared today, they would pivot to direct-to-household propagandizing via news boy yelling at your front porch wearing a Brian Stelter mask.

That's great that less people are watching it.

But they don't get their funding from advertising derived from their ratings. So nothing short of the actual destruction of their hardware will stop their broadcasts. Perhaps a worldwide flood Anderson?

Other Christian
Gold Member
It seem like the globalists want to use CNN as their main propaganda broadcast media outlet in the US and will accept the financial losses to do so. I imagine, however, that shareholders in AT&T will eventually start putting pressure on the company's leadership to try to make the network a little more profitable.

I noticed about 10-15 years ago that CNN responded to Fox News' success by trying to hire women reporters and anchors who were a little more physically attractive and made an effort to be somewhat more entertaining, as in kind of a "Fox-lite." They haven't gone far enough with it, obviously. The problem is that globalist politics doesn't really lend itself to infotainment like populist culture does (which Fox uses). Globalism is a dark, depressing, self-righteous, supercilious political philosophy that can't really celebrate life and living. How can it, when there is supposedly systemic racism and white supremacy everywhere that it needs to fight?
E

C-Note said:
The problem is that globalist politics doesn't really lend itself to infotainment like populist culture does (which Fox uses). Globalism is a dark, depressing, self-righteous, supercilious political philosophy that can't really celebrate life and living. How can it, when there is supposedly systemic racism and white supremacy everywhere that it needs to fight?
Click to expand...

CNN contributor tweets ‘The world today needs a Hitler’, has history of anti-Semitism

Orthodox
Gold Member
A CNN reporter tried to ask a MAGA/Trump rally-goer questions. It went off the rails.

Orthodox
Gold Member
CNN is not having a good week.

If I were a Georgia cracker, I'd still vote for Vernon Jones.

budoslavic said:
CNN is not having a good week.

Atheist
It's happening? I wondered how long CNN could stay in the ratings toilet while continuing to spew their propaganda.

The internet is abuzz today, my friends. It seems there may be some MAJOR shakeups at CNN, now that they’re about to have a new owner. And it looks like the new guy isn’t interested in operating a clown show, and he’s got his sites set on giving Fox News a run for its money by returning CNN to an “actual news” channel. According to (unconfirmed) reports that means MANY current talent and staff will probably get the boot. I have a feeling Stelter, Lemon, Acosta, and Cuomo are anxious right now.
Click to expand...

Protestant
Gold Member
There's a house on our street that's one of the typical 1st floor city dwellers that leave all their curtains wide open and you can see straight through their small apartment.

They have a huge tv mounted on the wall. 9/10 times I walk by this apt (which is daily at least once or twice since they're so close by), CNN is on.

I've started saying to my girl "is CNN on?!?! CNN?? is it on?!?! gotta get that CNN!!" kinda loudly when we walk by. I hope their windows are open enough to hear me sometime.

JayR said:
It's happening? I wondered how long CNN could stay in the ratings toilet while continuing to spew their propaganda.

You'll know if they're trying to emulate Fox News if their female reporters suddenly go up about HB1 or 2 in attractiveness, or at least increase by one inch in eyelash extensions.
Share:
Twitter Email Share Link
Top